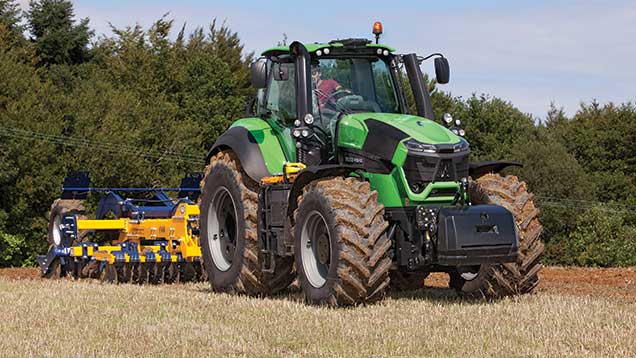 Deutz-Fahr is a tractor builder on a mission. It has followed up the launch of its 6- and 7-series CVTs with another tractor range that pushes the company’s boundaries well beyond the 300hp-mark.

The timing of its assault on the big power divisions is unfortunate – world tractor sales have hit a rocky patch and most makers have been forced to pull the reins on production – but this is a long-term plan for Deutz.

In the UK that means building on a lowly 3% market share that must make it one of the biggest underachievers, in sales terms at least.

But, with the 7-series now out in the field and the 9-series about to follow suit, the final phase of Deutz’s masterplan will continue in earnest next year when the 11-series goes into production.

See also: Valtra unleashes its most powerful four-cylinder tractor yet

It will resume the company’s march up the wheeled tractor ranks by taking power outputs to 440hp, where it will be knocking on the door of some of the biggest conventional tractors ever built.

Naturally, there’s a Deutz block under that huge nose. Twin turbos pump huge quantities of air into the six bores, which helps maintain the stream of power from the flywheel, even when you drop low down the rev range.

Such is the capacity of the engine, Deutz has decided to fit a dedicated water cooler to stop one of the turbos from getting too hot under the collar. Emissions are blasted by an SCR system and any of the bigger lumps are fished out with a passive particulate filter.

Maintenance access might be an area for improvement though. The air filter is slotted in at the base of the intake but needs a 13mm spanner for access. Quick couplers are coming, says Deutz, but for now it’s an inconvenience.

If you have been on the pasties over the summer then it will also be a squeeze to get past the mudguard to the engine oil dipstick.

That serious hike in power requires some high-grade cogs in the gearbox. ZF – which has long been Deutz’s transmission builder – once again provides a stepless CVT for the job.

Just like the lighter-weight versions, it works with four mechanical ranges and uses a hydrostatic pump to smudge the shifts and make them near imperceptible to the driver.

We prefer it to Fendt’s Vario, which requires the driver to select one of two ranges, simply because there is no need for any driver input – everything is dealt with automatically.

However, with TWB’s subsoil-ripping Terminator on the back the 9-series met its match. There was no shortage of power, but the gearbox struggled to react quickly to the burgeoning strain of the legs dropping deeper into the brown stuff.

At the start of every bout, the 9-series ground to a halt while the gearbox sorted itself out. Then, once it had caught its breath and accounted for the extra work, it began to pick up speed again and seemed comfortable chugging along at 10kph. It certainly was not a question of power.

Elsewhere, the Dana-made front axle is bigger and stronger than on the 7-series, and huge external disc brakes are fitted to the front axle to help bring the locomotive to a halt on the road. An Easy Steer system – which adjusts the gearing of the steering wheel to reduce the number of turns lock-to-lock – is also available under 15kph.

Things seem to have hardly changed in Deutz cabs for almost two decades.

That bubble-shaped office space synonymous with 1990s Agrotrons remains hauntingly similar to the latest generation, though under the skin there have been plenty of upgrades.

The latest version was first fitted to the 6- and 7-series TTVs launched a couple of years ago but there have been a few minor upgrades since then. The right-hand door is now just a window and the rear mounting points have been shunted back a few inches, but in the time we spent with the tractor it was difficult to appreciate any differences.

Views outwards are a little disappointing. The exhaust and air intake are not positioned directly behind the pillars so block more of the view than they need to. The huge bonnet and mudguards also make a look at the front linkage impossible, though things are a bit better out the back.

The redesigned dash mainly operates as a display and, along with the pillar-mounted LCD screen, is left redundant by the touchscreen on the armrest.

It is built by Topcon and has to rate as one of the best on the market. It contains Deutz’s Agrosky guidance system and a heap of other functions that are surprisingly easy to find – even for digital dinosaurs like my dad.

Headland management and spool flows are simple to change, and twiddling any knob causes the settings you are adjusting to pop up on the screen.

Most of the other key stuff is controlled through the handstick. It carries probably twice the number of buttons as the McCormick we tested last month, but after a couple of hours in the seat you should have it sussed.

Fully ballasted with a 1,600kg front weight and 1,300kg of wheel weights, the 9-series tips the scales at almost 15t – and it comes with the rear-end stats to match.

Lift is 12t and the hydraulics will also pump up to 210 litres/min out the back, so for most jobs you will need to strangle the oil flow to get a bit more control.

It is done pretty easily through the screen, where it is also possible to change which controls deal with each of the outlets, including the buttons on the fenders.

From a driver’s point of view not much has changed since the 7-series. That is a good thing and it remains one of the easiest high-horsepower tractors to hop on and drive.

The controls are simple enough to get to grips with and most of the important stuff, including cruises, can be recorded using buttons on the armrest.

Whether Deutz can assemble a dealer network to really challenge some of the bigger names remains to be seen, but there is no doubt the company has got the machines to do it.

We chose to match the 9-series with a 3.2m-wide subsoiler combination built by Sleaford-based TWB.

The company’s latest Terminator is more compact, measuring 1.2m shorter than the original to allow for tighter headland turns.

The 6t set-up carries two rows of 510mm concave discs that did a good job chopping and throwing the stubble-topped soil across the width of the machine on our light-ish land. There’s also a 560mm disc option with a shallower concave for working a bit deeper.

TWB mounts its own subsoiler legs behind the discs, though it’s possible to switch the two around and run the legs up front. The toolbar can carry between three and seven legs, but bear in mind that they’ll get down to 400mm. It means power requirements will range from as little as 200hp on the three-leg to the fat end of 400hp to pull the seven-legger at a decent speed.

Protection is provided by TWB’s tab system rather than traditional shearbolts. The tabs hook between the top of the leg and the frame, and have a notched section that breaks off under strain. It’s far easier to replace than a rusty, slightly bent bolt.

At the back is a 700mm twin-disc packer that left a near-perfect drilling surface, pressed enough to retain the moisture but still nicely loose further down the profile.