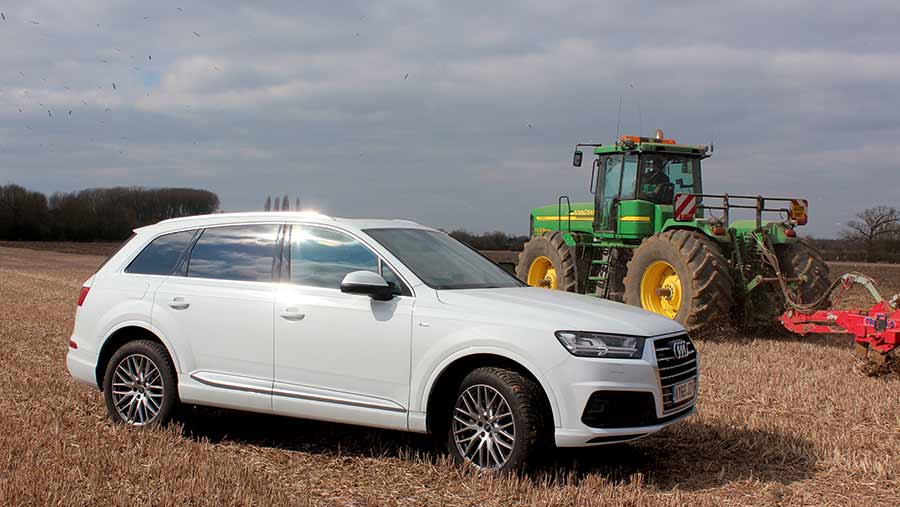 Audi has relaunched its big, blingy Q7 4×4, which it claims is just a tad more reserved than before.

Its subtle-as-a-sledgehammer predecessor was the Bavarians’ Captain Scott, leading the four-ring firm into a world of previously uncharted SUV riches.

Though a little later to reach that particular landmark than most of its rivals, the indulgent dimensions and brash design went down a treat with the equally inflated egos of the City traders. Only they were armed with bank accounts to match the Q7’s meaty asking price and relentless thirst for fuel.

The big, new frame remains body-building material and the gluttonous combination of marshmallow white paintwork and expensive wheels of our test car still scream Stamford Bridge car park, but believe it or not, Audi has since reined things in just a tad.

The new model is ever so slightly shorter and narrower – though still a nightmare to park.

Propulsion comes from the popular 3.0-litre TDI block tuned to 215hp or 272hp and paired with an eight-speed auto box.

The engine is calm and cruisey for the most part, ambling along at about 1,500rpm to make life in the driver’s seat as tranquil as a day’s fishing.

If you like your driving with a bit more spice, a few tweaks on the main screen gets it sweating in each gear. A quick burst and copious fuel will take it to 62mph in 6.5sec and top whack comes at 145mph. The silky growl of the V6 makes for a pretty agreeable soundtrack in the process.

The transmission, too, is a slick, creamy affair. Gear shifts are ghostly and the speed needle quietly glides beyond the limit without so much as a twitch.

Claimed economy comes remarkably close to the 50mpg mark, though a steady boot is more likely to deliver 35mpg. Drive it harder and its diesel diet quickly becomes unpalatably expensive.

The generously specced, and less generously priced, version we tried came with air suspension – one of the few optional extras really worth having.

Steel springs are standard gear, but the extra cushions make a big difference around bends, which the monolithic Q7 manages to take in its stride despite its two-and-a-bit-tonne body.

A tap on the infotainment system will drop the airbags down a couple of pegs to help slice its considerable frame through the air on long motorway jaunts, or jacked up 245mm above the deck to safely negotiate the kerbs and speed bumps of Park Lane.

Steering is well-weighted, which means you can hit roundabouts smoothly and with confidence. No doubt dropping the engine a little bit lower in the frame has done the car’s centre of gravity no harm, either.

Audi’s biggest family member was also sent to boot camp during the off-season to trim some of its 2,500kg weight. It’s shed more than 300kg since the last model and looks all the better for it – a few tinwork pinches and creases have also helped disguise the Q7’s naturally big-boned frame.

In the rubber department, 19-inchers are standard fare and 21s optional, but of more interest is the all-wheel steering option. The rear wheels only turn a maximum of 5deg – nothing like you would see on a telehandler – but it makes the ocean liner just a bit more manoeuvrable in a Marks and Spencer car park. 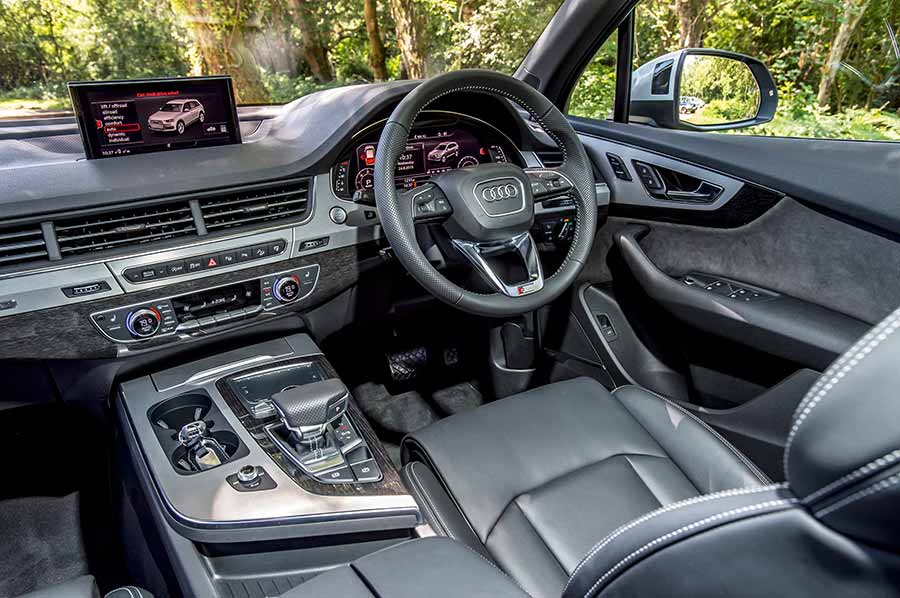 Audi’s interior is top drawer. It gets five stars for the mix of flashy brushed metal dials and leather-style detail around the dash, and there’s heaps of technology, including on-board internet and adaptive cruise control.

The virtual cockpit taken from the new TT sports car is another of the options we could be convinced to pay for. A mere £600 – peanuts compared with most of the other stuff on the list – gives you a groovy fighter pilot-style screen showing everything you could possibly want.

The satnav, media player and car settings all pop up right under your nose, which is far less distracting than the iPad-style display in the Volvo XC90.

Three rows and seven seats are standard issue, with comfort levels naturally diminishing the further down the pecking order you fall. Despite the shorter, narrower dimensions there is more space between the first and second row of seats, which makes those particular pews more comfortable long-haul.

However, the options list is a minefield of wallet-draining luxuries. Our test car had £18,000 worth of extras in total, yet the adaptive air suspension (£2,000) and the virtual cockpit (£600) are the only ones we would choose.

Things such as the £1,350 head-up display and £1,700 panoramic glass sunroof can certainly be done without.

Fast, powerful and comfortable, but ponder the options list for a few minutes too long and your wallet will really feel the damage.

Competition is rife in its class – the Range Rover Sport, Volvo XC90 and BMW X5 all provide serious competition – but the Audi can comfortably match them. It’s short of genuine off-road pedigree though, so if you actually want to go off-highway, stick to the Range Rover.