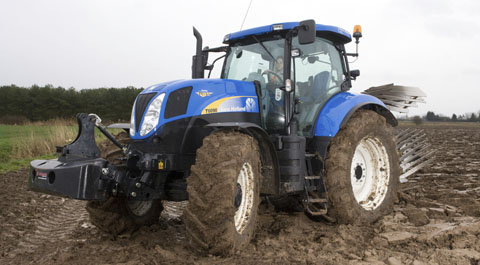 A good contender for anyone wanting a competent-but-relatively-lightweight 174hp tractor. May need ballasting for lugging work

Mention power-to-weight ratio to many farmers and it’s like listing the vital statistics of Pamela Anderson.

But just as it didn’t take long before Pammie’s 34DDs were cast into the shade by Jordan’s 32Gs, manufacturers are fighting over one another to offer tractors that provide more power and less weight.

On paper, New Holland should be on to a winner with the petitely-proportioned-yet-powerful T6090. With a shipping weight of 5650kg (the same as the 6080 and 6050 models) it boasts a 28kg/hp power-to-weight figure.

The T6000 range, which spans the 127hp to 165hp band, is already NH’s best-selling range in the UK with the previous T6080 flagship accounting for more than 550 sales in 2008, according to the company’s Richard Hollins.

So, what’s changed? The larger intercooler and beefier cooling pack proves the rule that you can only have as much power as there is cooling capacity. Rated at 165hp, the T6090 boosts to 201hp – pushing the 6t tractor into an altogether higher power category.

That’s not all that’s new in the 6000 series. All Range and Power Command models get a higher power boost of up to 38hp thanks to tweaked engine management systems and larger cooling packs throughout the range, with the 155hp T6080 boosting to 192hp instead of 178hp.

More power with less weight is the idea, says Mr Hollins. “Farmers would have a 300hp tractor that weighed 6t if they could. But it’s not ideal for every situation.”

Every six-cylinder tractor in the NH stable has the same 6.75-litre common-rail Fiat Powertrain power plant and it’s the size of the turbos and cooling packs that differ. The 6090’s 165hp-rated power boosts to 201hp, meaning it overlaps snugly with the T7030, which is rated at 167hp and boosts to 210hp with the same engine.

To accommodate the extra cooling capacity, both the 6080 and 6090 are fitted with slightly taller bonnets (about 4in) than previous 6000 models. NH says that as a result, fuel consumption has also dropped in the previous T6080.

Using engine power management, which is standard on all Range and Power Command tractors in the T6000 line-up, power boost kicks in during high-speed transport applications, PTO and during demanding hydraulic tasks. At all other times, power reverts back to 165hp.

Unlike the rest of the T6000 range, which is available with Range Command or Power Command, the 6090 is only available with 16F x 6R (or 29 x 12 creeper) Power Command full powershift transmission. This will act as an important point of difference between the T6080 and 6090, says NH.

Like all Power Commands, there are several ways of shuttling between forward and reverse, the most straightforward being to use the rocker button on the Command Grip joystick, which proved handy for shunting back and forward on the tight headlands of heavy vegetable land. It’s also fairly straightforward to programme gear settings between directions.

Although there are field and transport auto modes, while ploughing it was easier to manually control gears to maintain engine rpm and forward speed, but operators can select how much engine droop there should be before the transmission downshifts.

Models fitted with a SideWinder II armrest and 50kph Direct Drive transmission come with an exhaust brake, minimising the need for drivers to ride the brakes. Using technology taken from the commercial sector, the tractor has an extra pedal to the left of the clutch. When pressed, it closes a valve in the exhaust manifold causing back pressure in the combustion chamber and slowing the engine in the process.

To manage engine load during heavier draft applications like ploughing, there are two engine speed options to toggle between, meaning you don’t have to fiddle with the throttle at the headland.

The company says there is a strong demand for a CVT option in this power band and the rumour is that there’ll be a T6000 Auto Command later this year.

Just as the T7000 range claims a quiet cab noise of 69dB, the 6090 is also fairly softly spoken. Because the biggest single item to create noise in the cab is the cooling fan, the bigger cooling package means slightly higher (but still OK) working sound levels of 70dB. And it is quiet; at 1800rpm there’s no need to raise your voice to have a conversation. 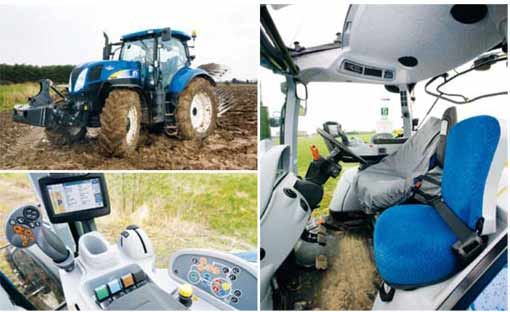 The SideWinder II armrest, launched on the T7000 series last year, is available on all models in the series fitted with electronic remote valves. A handily placed multi-function joystick gives easy access to the most-used controls, while the IntelliView II screen displays all the key stuff you might need to know.

Unlike the previous larger T6000s, upgraded cab suspension minimises the sideways movement some users previously experienced, and while we didn’t take it on a long transport run, transporting the plough didn’t result in much sea sickness.

Both the standard armrest and the new SideWinder II option are available, each denoted by whether mechanical or electronic spool valves are opted for. For the extra £2000 you get the Intelliview II screen, full headland management system (with mechanical, it’s a case of lifting and lowering and directional changes), the option to toggle between engine speeds and rear linkage controls.

While the front weight – 1500kg – may have leaned towards overkill, it acted as an indicator of how pokey the 6090 is. It’s all very well having 200hp, but in this field there needs to be a fair bit of added weight to pull a five-furrow Rabe plough, especially in wet conditions.

But that’s what the 6090 is designed for, says NH. For drilling, mowing, top dressing and spraying, there’s no need for extra weight, in fact it’s more of a hindrance.

The T6090 is physically the smallest tractor you can fit 42in tyres on. Not only does this spread the footprint, it also results in better ground clearance for tasks such as spraying and baling. And it apparently won’t come at a hefty premium, either. NH doesn’t have a base tyre as such, leaving buyers the option to choose which suits them best at initial purchase. The company expects most people to go for 580 42s.

Pulling the five-furrow plough in what most of us would call man’s land – the 6090 seemed to cope fine, automatically applying the wheelslip limiting system in the really sticky bits.

The optional 3.7t lift front linkage is integrated into the front casting, meaning it’s closer coupled to the front axle. There are two benefits to this. One is that anything on the front doesn’t hang out as far (important for pulling out of field gateways on to the road); the other is that the load on the front axle is reduced.

With the price difference between a 6080 and the 6090 just a mere £1500, it begs the question of whether the smaller, best-selling model may become obsolete. New Holland expects the new model to cause a split between those opting between the T6080 and the 6090 and to also attract new customers. “We’re not just predicting a migration of customers [from other NH models]. It will depend largely on the gearbox as those wanting Range Command will have to go for a 6080.”

Equally, those customers who wanted a 160hp previously had to move up a weight band and opt for a 7030, meaning some may choose the smaller T6090 instead.

Mr Hollins is keen to point out that, if the tractor is meant for predominantly tillage tasks, it may be worth opting for the heftier T7030. The T6090 is not only aimed at medium-sized farms, it’s a good contractors tool as well with more than enough poke to cope with mowers or a big square baler.

The T6090 puts 6t tractors into a different category with its 201hp maximum power rating. For those wanting a competent but lightweight all-rounder with a proven engine, it’s a strong contender. But don’t be wowed by the power-to-weight ratio alone, if it’s a tillage tractor you’re after, you’ll need more weight.