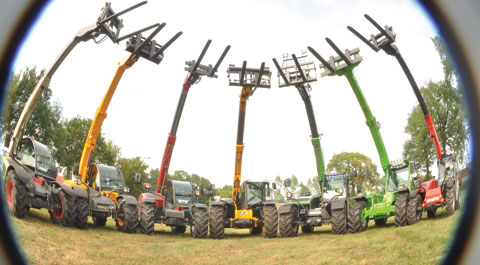 Combining small dimensions with big performance sounds like a difficult task, but the latest compact telescopic handlers are managing to do just that. It’s an important development because it means that relatively small loaders can be used in older farm buildings where space is at a premium.

But what maker has the best compact loader? We decided to take a look at the following models

The Manitou and Weidemann loaders are a bit smaller and lighter than the rest and have slightly less engine power. This modest size difference allowed us to take the opportunity to compare the compact loaders against their smaller competitors too.

It also meant that we could see if the bigger models did a better job or whether smaller are edging ahead.

How much can these compact models lift and what height and reach do they offer? The height of the loader’s pallet forks varied between just short of 5.7m on the Weidemann and a substantial 6.5m on the Merlo.

When it came to assessing lift, we based our measurements on a practical measurement point of 4.5m high and 1m in front of the loader. This would be typical for anyone loading a truck or feed mixing trailer or stacking bales.

On average the loaders could handle 2.7t in this position. The Claas edged in front, managing 3.2t. Dieci followed with 3t capacity and Weidemann with 2.9t. The small Manitou came last with 2.3t but only just behind the Deutz (a little over 2.4t).

The parallel linkage systems used meant pulling in the attachment very slightly during the lift to avoid loads slipping off the pallet or spilling from the bucket. All the loaders performed well here, especially Manitou and Merlo.

Breakout force is important and, as a rule of thumb, should be at least as good as the lifting capacity and preferably a little higher. The minimum requirement was met by all test candidates, with Merlo and Weidemann doing particularly well.

Our main aim here was to match the engine and drivetrain. All the machines in this test use hydrostatic drive with two gears – on most loaders this is hydraulically selected.

Merlo and Dieci use reduction gearing, giving the Merlo a forward force – ie pushing power – of 6,800kg in first gear – the best of the test. On average, the loaders managed 4,600kg in first gear and 3,700kg in second. The exception in second gear was the Dieci which managed a lowly 1,600kg. The test results showed that though the Manitou was from a smaller load class it still managed just over 2,800kg of forward force in both gears. The JCB’s engine and drivetrain was well matched, so quickfire loading work should pose no problems for this model.

We also measured draft pull with the loaders because in Germany they can be licensed as tractors. Average draft at 5kph for all machines tested was 2,700kg. Top performance was scored by Claas with 3,360kg, followed by the Merlo with 3,150kg. Interestingly, the small Manitou (2,130kg) still beat the Weidemann (1,920 kg).

On all the loaders the most important hydraulic functions can be joystick controlled. Claas, Manitou and Weidemann, however, also offer shuttle selection on the stick. JCB leaves the choice up to the driver with a shuttle lever by the steering wheel as well as a rocker switch on the joystick.

Dieci has an unusual system whereby the button on the back of the joystick has to be continuously pressed when the stick is being used. This is tiresome and would probably be quickly overcome in practice by taping down the button. We would have preferred to see a separate lock system, as used on the other machines.

The position of the cab has a big influence on driver visibility. A very low cab means the machine is low, too, so cab access is easier. But it can mean that visibility to the right and rear suffers.

If the cab is higher the driver has to clamber up to it but, once in, he or she enjoys better visibility.

Our test machines included all types of cab designs. The Weidemann, for example, is only 2.05m high with predictably limited visibility for the driver. Claas, Deutz and Dieci position their cabs somewhat higher at 2.2m so visibility is better.

The Merlo manages a good compromise – it’s only 2.15m high but still offers a good view for the operator, with the working lights and indicators positioned down on the framework. The engine cover slopes away to the right, too, helping give good views.

There were one or two disappointments here. The Dieci’s attachments were susceptible to collecting mud and the oil dipstick can only be reached after undoing two screws.

Heavy loads and long booms are a combination that can quickly cause the rear wheels of the loader to part company with the ground and, in extreme cases, to tip forward completely. New safety standards arrived in 2010 to regulate telehandler reactions in such situations and manufacturers have come up with a variety of systems.

Here’s a typical situation. You’re driving forwards and, at the same time, extending the boom carrying a pallet as well as lowering it. The overload safety system senses the reduction in weight on the rear axle and that the machine is in danger of tipping forward. The electronics now swing into action, preventing you from extending the boom any further, lowering it or changing the angle of the attachment. The only functions that remain active are raising the boom and retracting it, since they both improve the safety of the situation.


This is all fine in theory, however there are situations where simple systems like this can complicate loader operation. For instance, imagine you’ve got a full bucket of wheat poised above a trailer. When you tip the bucket ready to empty, this automatically moves the weight at the end of the boom forwards. If the safety system activates you cannot tip the shovel further, making fluid work with the loader impossible.


Here’s how the test manufacturers solve this problem: