Electric fences have been a reliable ally for farmers looking to keep livestock in or vermin out, but their usefulness has always been hobbled by the capacity of run-of-the-mill batteries.

So, for those who can’t call on a supply of mains power, that means traipsing to the field on a regular basis to make sure the energiser is still sending a hair-raising shock down the line. 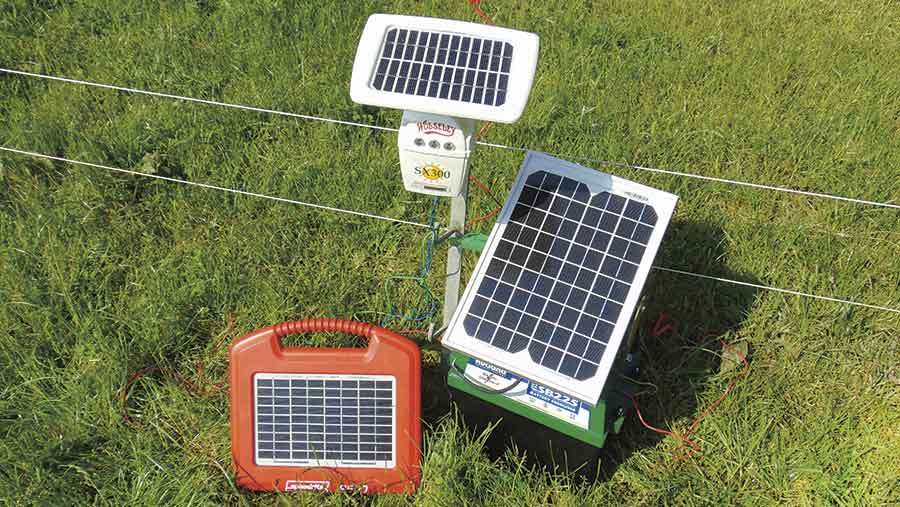 To combat the problem, suppliers have started offering solar panels designed to extend the charge life of batteries.

We have picked three similarly-specced top-sellers to find out whether they can really make a difference to battery life. 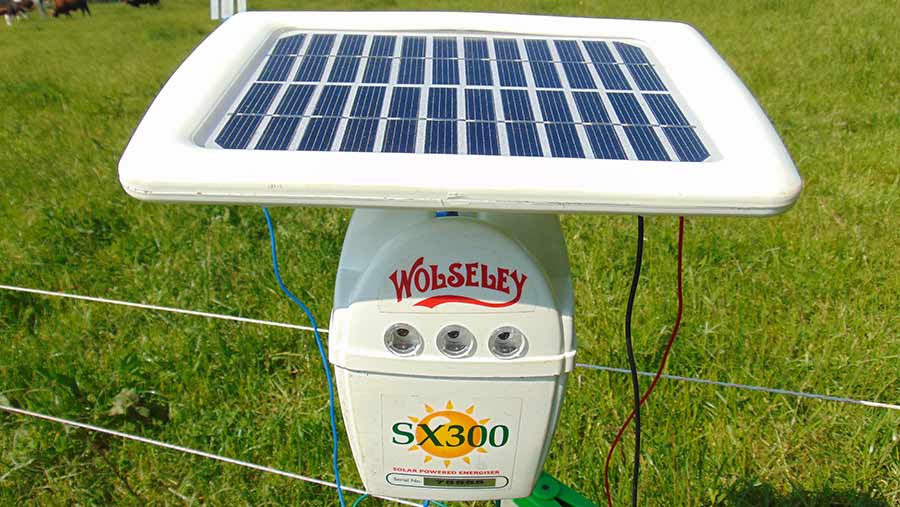 The British-made unit combines solar power, rechargeable batteries and back-up C-cell batteries to ensure it stays awake at night and on overcast days.

Ease of use: The Wolseley was the simplest to use out of the three. It’s the smallest, too, which makes it easy to carry around and mount to a post.

Build quality: Unfortunately the SX300 comes up short in the quality stakes. Flimsy plastic and thin cables result in a budget feel, and there is a shortage of seals around the important joints that might eventually let water seep in. On the plus side, the crimped connectors will be easy to replace.

Price: By far the cheapest – it’s sold by Stockshop in Exeter for £216.

Notes: The combination of rechargeable and C-cell batteries means that the power is still on if one is disconnected.

It’s simple to connect the wires, but the small base means it needs to be mounted on a post to make sure it doesn’t topple over. The two-year guarantee will also offer buyers some peace of mind.

Verdict: It’s the cheap option, but is still a lightweight, easy-to-carry energiser that will be more than adequate for plenty of punters.

Build quality is its biggest let-down, and it also relies on the leisure battery too much. Probably better suited to broilers than an angry bullock. 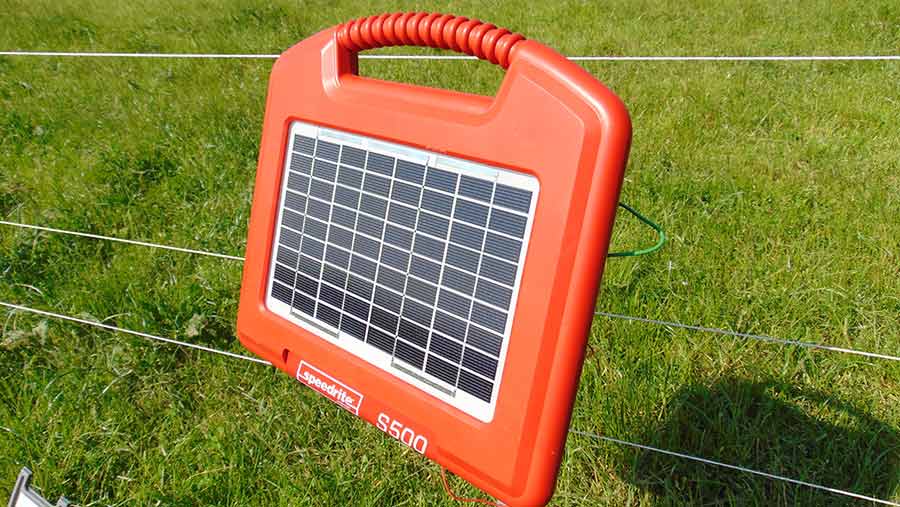 Rappa is an established name in the world of electric fencers and is the UK distributor for Speedrite energisers. The S500 uses an integrated battery to power the fence and the company claims that it’s able to deliver peak performance in low sunlight.

Ease of use: Quick to set up, with an integrated battery that means it can be placed on the deck or pinned to a post.

However, the on/off button sits flush to the panel rather than being a big clunky switch, which means it’s harder to tell whether it’s turned on or not.

Build quality: The Rappa is more solidly built than the Wolseley, despite being all plastic. The fully integrated solar panel is nicely made and the case feels rock-solid.

There are no sharp corners and very few panels, which means there is less likelihood of it falling apart.

Price: It’s the mid-range option, coming in at £285. Access to the sealed-in battery might concern some people, but replacements can be found online.

Notes: A pretty small integrated battery means the system relies heavily on the solar panel for power, which might be bad news if we get an extended spell of dull weather.

The little battery can be easily switched in the field, but having to march back out to swap them defeats the point of using a solar panel to extend their life. Like the Wolseley, a two-year warranty is on offer.

Verdict: A good balance of power and price. The solar panel is a solid performer and output remained constant, even on a cloudy day. However, the on/off button is clumsy and the internal battery was unconvincing. 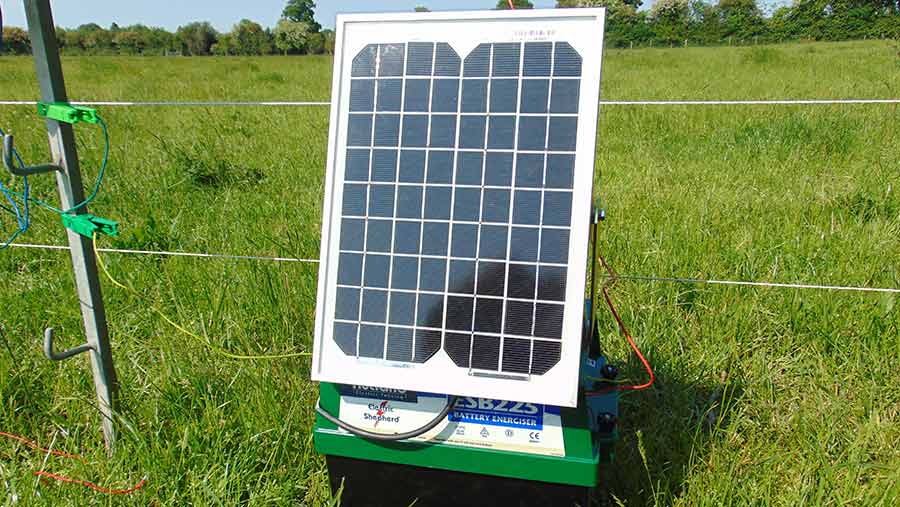 Rutland is a relative newcomer to the market. It comes with a big case that means it’s possible to store a full-size leisure battery on board. A 10W solar panel is also part of the package.

Ease of use: Big switches and clear lights mean inexperienced operators should get to grips with the Rutland pretty quickly.

Optional settings [such as?] are also easy to change and clearly laid out.

However, it’s more complicated to assemble and is also an awkward size and shape to haul across a field, partly because the solar panel blocks access to the carrying handle. It’s a bit of a lump, so needs to be sat on the ground.

Build quality: Top-drawer build quality that feels made to last. The plastics are tough and wiring feels like it should out-last the other two. A rugged plastic case should also stand up to the British weather better than most.

Price: Quality comes at a price – at £308 it’s the most expensive of the three.

Notes: Solar panels are easily replaced, which is handy. The warranty also stretches to three years.

If you’re looking to renew some of your livestock-orientated kit, then the Livestock Event might be a good place to start. It runs on 6 and 7 July at the NEC in Birmingham (B40 1NT).

It’s a bit more complicated to set up than the others, but still shouldn’t cause too many headaches.

The solar panel pumped out big voltage figures on bright days, though it’s a shame there’s no back-up system.

Generally speaking, you get what you pay for.

Energisers are an easy target for thieves and one of the most frequently stolen pieces of farm equipment, but if you’re confident of keeping it safe then go for the Rutland.

It’s the Rolls-Royce of solar-powered fencers and certainly worth the extra few quid.

The other two still do a reasonable job, so if you’re shopping on a shoestring we would give the Wolseley the edge because of its back-up power supply.

The numbers: How the three solar-powered fencers compare