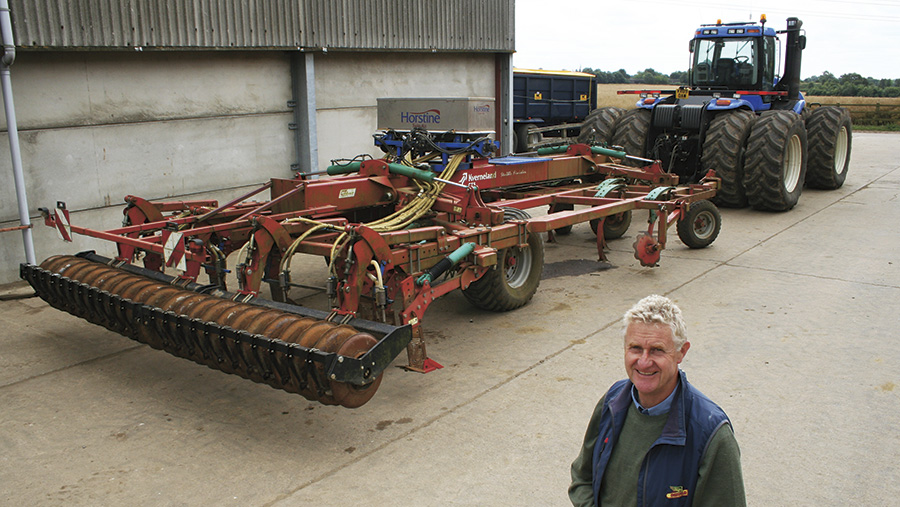 With 80ha of Ragdale series clay loam on rolling topography at their disposal, exhibitors at this year’s Tillage-Live event can expect decent but potentially challenging conditions to show of the capabilities of their cultivation and seeding equipment, says host farm manager Ken Grimsdell.

The land at Monks Kirby on the Fosseway is at the heavier end of the clay loam spectrum, particularly when compared to the sandy loams of R&T Ensor’s farms around the main base at Hinckley in Leicestershire.

“It can be quite fragile and tends to slump,” says Mr Grimsdell.

“The land is all under-drained but we still have a limited window to get things right and if it’s wet for the event, conditions will be testing – but hopefully not impossible.”

The Tillage-Live site is part of the 1,100ha cropped by a family owned farming business that pioneered the use of heavy stubble cultivation in place of ploughing and big four-wheel drive tractors previously only seen on the wheat and corn prairies of North America.

“But our main drilling tractor is now a 396hp John Deere 8360RT on tracks and I hope we can run more tractors of 250-300hp as our crop establishment practices change and biology replaces metal and hydrocarbons.”

At present, min-tillage is the method of choice for establishing wheat, which accounts for a little less than two-thirds of the cropped area.

It is grown for feed and alternates with oilseed rape and spring crops in a four-course rotation.

“Our spring cropping includes grass, lucerne and maize grown for local dairy farmers on our lighter land that will support heavy harvest machinery,” he says.

“Otherwise, we grow spring barley and beans, largely to help control grass weeds – we have soft brome, ryegrass and a bit of blackgrass but it’s all kept under control with wise chemical use and crop rotation.”

A 7.2m Simba SL cultivator is the main tool for preparing wheat land, set up with a single row of discs ahead of soil loosening tines, another row of discs and a packer to get the job done in one or two passes.

Once drilling dates come around from mid-September, an 8m Dal-Bo CultiMax cultivator equipped with levelling paddle tines ahead of a fairly intense array of spring tines prepares the way for a Vaderstad Rapid drill of the same width.

Thanks to the work of the preceding implements, the Rapid has the distinction of being one of the few in Britain equipped with Agrilla leading tines rather than the far more common System Discs.

“We’ve run the drill in this configuration for the past seven years after deciding that the discs were too expensive to run,” explains Mr Grimsdell.

“The Rapid is a very good wheat drill but we have to explore how we fit it into the controlled traffic farming regime that we’re moving towards.”

It is occasionally used for direct drilling wheat where soil type and conditions allow but its main role is to establish oilseed rape and the spring-sown cereal crops.

Among its key attractions are the ability to re-configure the coulters relatively easily for 10in and 6.5in row spacing and to place nitrogen with the rapeseed and phosphorus fertiliser with spring barley.

“No seed-bed cultivations are carried out for spring-sown barley or beans, other than possibly tickling the winter tilth with a 12m trailed flexible tine rake,” he says.

“We’ve used the rake for many years, either for slug control or to spread straw and chaff in stubbles.”

The Dale drill moves aside for a 4.2m Kverneland CTS Stubble Finisher for sowing oilseed rape in fields that need some restructuring.

Often it’s the result of wet harvest conditions or the extra traffic that comes with selling straw and having biofertiliser and sewage sludge applied.

The CTS has been modified for strip tillage by removing all the intermediate tines to leave one modestly winged chisel tine at the front per row working in line with a winged soil-loosening tine set no deeper than necessary to deal with any wheelings.

Seed and slug pellets are dispensed separately from a Horstine Farmery TwinAir via tube outlets positioned behind each of the rear-mounted soil loosening tines.

With many variations of implement available, life has become more complicated than in the days when there was a blanket approach to cultivations and drilling within a short window.

“Drilling later means we have more time but we also have more choices, which require more intelligent management.”

“We’re a lot better educated about soil management and how to treat soils, and one of our objectives is to reduce the amount of soil we move in preparing land for crops.

“We’ll select equipment and the set-up on a field-by-field basis to achieve the result we want with the least effort.

“There are three different sets of tines for the Simba SL, for example, which offer different levels of soil disturbance.

“We’ll also work the discs as shallow as possible, lifting them right out if appropriate,” he adds.

“It makes management more complicated and sometimes you feel like sitting in a quiet room with a cold towel over your head to really focus on what we’re trying to achieve.

“However, it’s necessary if we’re going to get a good crop at minimal establishment cost in terms of time, fuel and worn metal.”