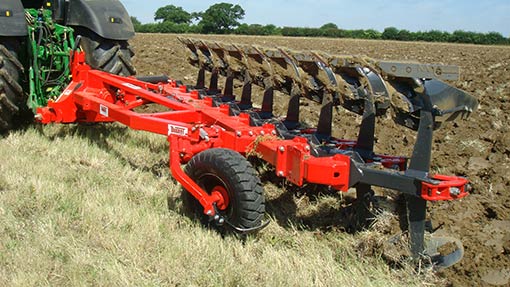 Plenty of manufacturers are keen to show what their cultivators can do in the battle against blackgrass.  Peter Hill  takes a look at the movers and shakers.

French manufacturer Bugnot says that soil inversion and trash burial are not impaired.

The skim plough is designed for on-land working and comes in sizes turning five- to 11 furrows across 1.5m to 3.3m. It’s a similar width to a small cultivator comes with shear-bolt or non-stop leg protection. 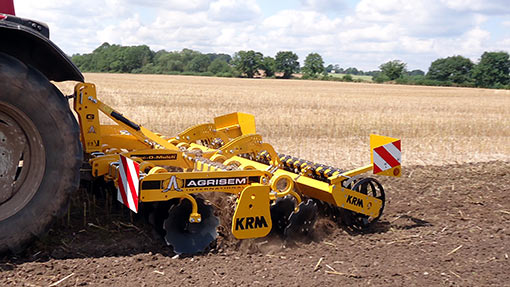 It features two rows of cutaway discs followed by press roller for quick, shallow cultivation of stubble. This should help incorporate crop residue and encourage weed and volunteer seed germination.

The Disc-O-Mulch can also be used for chopping and incorporating maize stubble or for seed-bed preparation after the plough.

Unusually, each disc unit is carried on a patented pigtail-shaped tine rather than the more common rubber-cushioned rigid leg. This allows the disc to move in three dimensions and is said to create a “percussion” effect claimed to improve penetration in hard conditions and also mixing-in of residues. 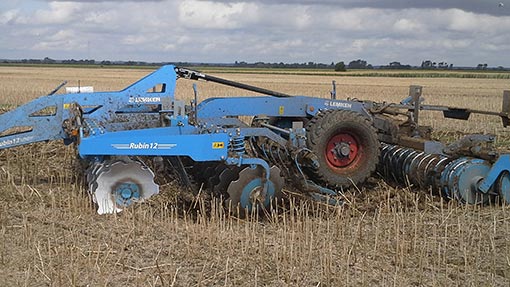 A wider-working example of the Lemken Rubin 12 disc cultivator will be in action at Tillage-Live to demonstrate the implement’s performance as a shallow cultivator for making stale seed-beds.

The new configuration uses larger diameter, serrated discs set at an aggressive angle and is already available as a 3m rigid frame cultivator. However, it is now joined by 4m, 5m and 6m folding models.

A substantial straw harrow follows and a double press completes the soil-working process. There’s the choice between either deep- and surface-consolidation rollers or two surface rolling units, depending on soil types and the intended role of the implement. 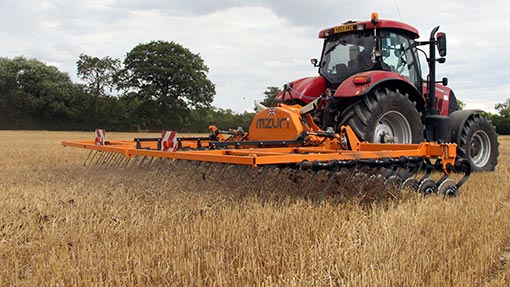 A stubble harrow for direct drilling systems will be introduced by strip drill  specialist Mzuri.

It uses five rows of finger tines that can be preceded by a row of serrated discs mounted on leaf spring tines. The working angle of the discs can be adjusted according to ground conditions and trash levels, and are set to work no more than 30mm deep to chop straw and trash and mix it with the surface tilth.

The flexible tines then spread the mixture over the full working width – the idea is to retain weed and volunteer seeds on or near the surface to encourage germination while denying slugs their preferred environment. The action of the discs and tines should also have a physical impact on slug survival.

The 7.5m-wide implement hydraulically folds and locks in its 2.8m-wide transport configuration. It’s linkage-mounted and needs about 120hp to achieve working speeds of 20kph for outputs around the 8ha/hour mark. 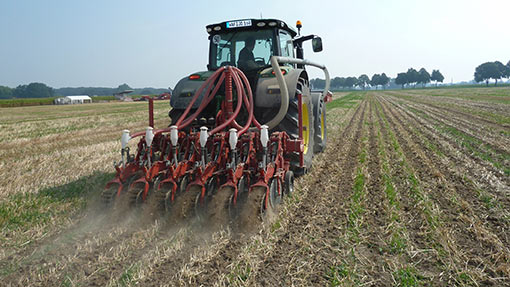 A strip tillage cultivator will feature on the Kverneland plot ahead of commercial production planned next year. By then. the Norwegian manufacturer expects to have units larger than the 3m, six-row implement being trialled.

A slurry injector version of the Kulti-strip is also in the pipeline. It would be used on the back of a tanker to place farm or digester slurry into the cultivated strips prior to precision drilling of forage or energy maize.

The Kulti-strip can cultivate soils in distinct bands from 450-900mm apart using trash cutting and clearing discs, and tine that can also place fertiliser, and a choice of finishing implements. 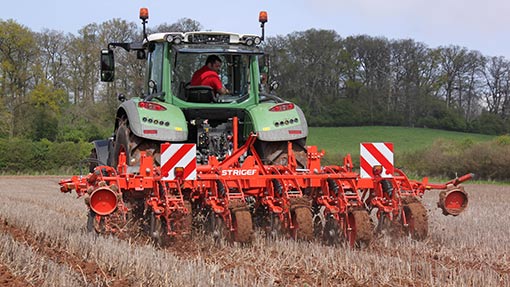 The new Striger uses a disc to cut through stubble and surface residue, and a star-shaped trash remover to clear it. That allows the following tine, double discs and a tamping wheel to prepare a seed-bed in “clean” soil.

Strip seed-beds prepared for sowing oilseed rape or drilling maize use up to 80% less fuel than ploughing and 50% less than conventional cultivation, the company calculates. It can also reduce the time spent on the task by 70% and 50% respectively, Kuhn says.

The Striger is available is available in six- to 12-row sizes on a 4.4m or 6m folding frame, and in four- and six-row versions on a 3m frame. 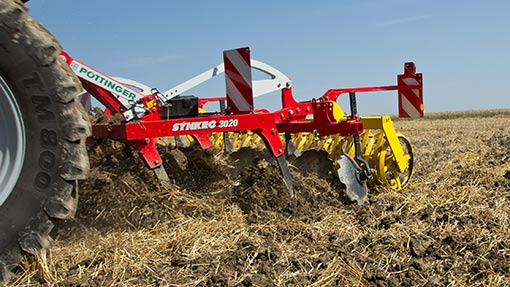 Working widths of the 1020-series implements are 2.5-6m, with power requirements starting at 70hp. Deep underframe clearance of 80cm and tine spacing increased to 45cm provide greater space for large volumes of trash.

Designed to work at depths from 50-200mm, the Synkro’s tines provide full-width stubble loosening using 470mm wide points. These can be set at one of two angles for penetration into different soils and conditions. 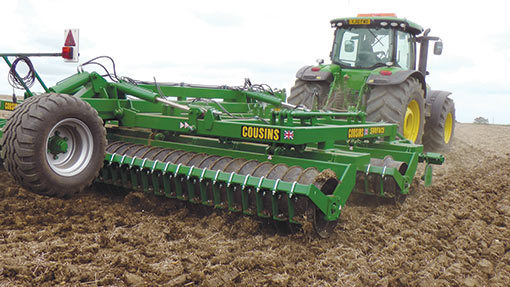 Cousins’ Surface cultivator, developed to help with blackgrass control strategies, has two rows of rigid chisel tines followed by a Razor Ring packer and then a repeat of that configuration but with closer-spaced rings for more intensive consolidation.

The implement is available in production form in 3m rigid, and 4m and 6m folding sizes and its tines work no more than 50mm deep to create a seed-bed without mixing weed seeds deeper into the soil profile. 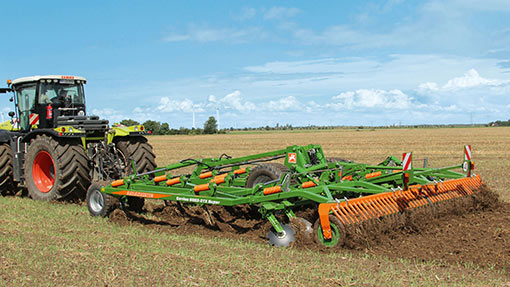 Amazone has expanded its range of Cenius TX mulch cultivators. The green-liveried machines use tines in a four-row staggered layout so that alternate tines can be lifted out of work where less soil needs moving.

The feature is intended to minimise power and fuel consumption by tuning cultivation to need and enable the implement to work in different soils and situations. An optional weight transfer system, loading the tractor by up to 1,500kg for maximum traction, also aims to promote efficiency.

The Cenius TX comes in four sizes from 4-7m with 28cm tine spacing when all are engaged, and 80cm beneath the heavy-duty frame. Working depth extends from shallow stubble cultivation through to deep loosening at 30cm using alternative shares for the new C-Mix tines.

In each case, the 350mm wing, 100mm inversion share and 80mm deep share have a separate point and guide plate to reduce the amount of wasted worn metal. 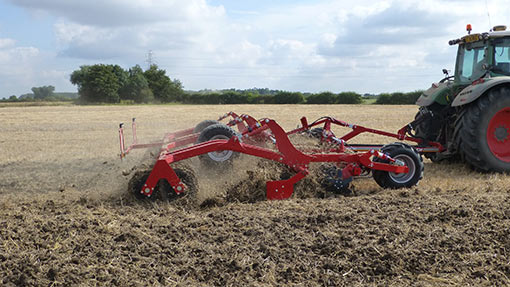 A longer frame for improved soil flow and to make space for a double packer, plus a hydraulic levelling board up front, are features of the latest-spec Horsch Joker RT high-speed disc cultivator.

Available in 6m and 8m widths, the implement’s primary role is shallow loosening of stubbles to create a stale seed-bed in a min-till system. But it gets added versatility from the paddle levelling tines mounted across the front of the frame because they help work down ploughed ground more effectively.

A double packer can be fitted to add consolidation performance on lighter soils and the extended frame allows time for soil moved by the aggressive discs to settle ahead of the packer.