Banging on about shiny new Lexions and the latest high-capacity New Hollands is all well and good, but there is still plenty of demand out there for smaller five-walker combines that will chew through less than 202ha/year.

At this end of the market there is no shortage of machines to choose from.

However, New Holland and Claas still manage to find themselves at the upper-end of the pecking order for their relatively high output and good build quality.

Just like any well-used machine there is plenty to watch out for when buying a second-hand one.

So we enlisted the help of Devon-based dealer Rodney Cowle Machinery, which has been in the used combine business for more than 40 years.

We singled out two of the more popular five-walker machines in the sale yard – a 1997 Claas Dominator 98SL and a 1995 New Holland TX64.

Demand for these machines is generally higher than their larger six-walker siblings as they can be threaded down small lanes and have more manageable header sizes for awkward fields.

The Claas is a simpler and lower output combine, which should be well suited to those with about 121ha to cut, whereas the higher-output TX64 would be good for 161ha or more. 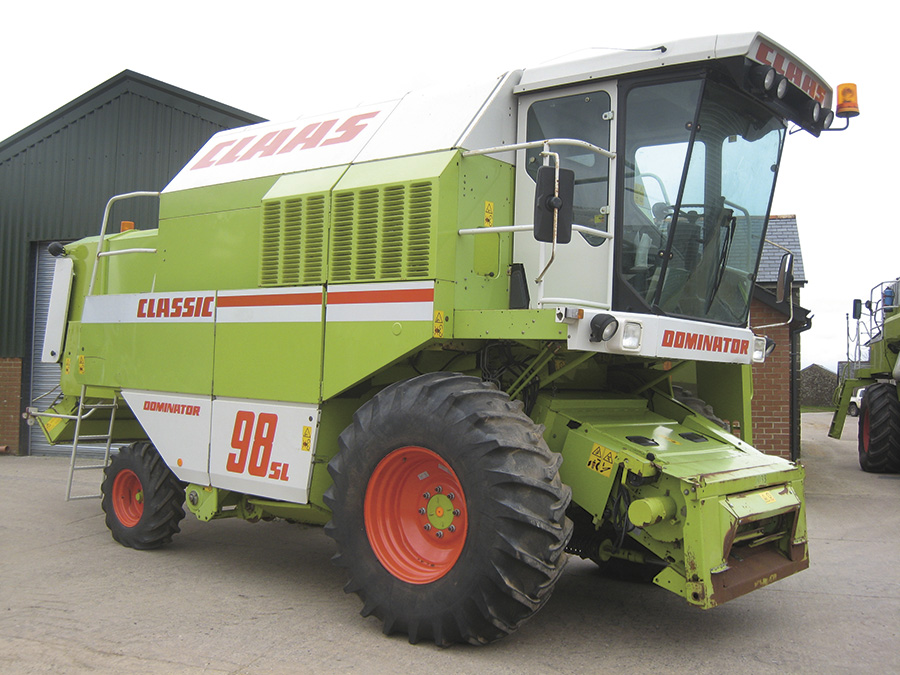 The Dominator 98SL is one of the last of Claas’ Dominator range and is slightly lower output than the Mega series which had the APS threshing system.

That means it’s a simple five-walker combine with few electrics on board and has the benefit of a hydrostatic transmission.

The S version comes with a standard transmission and a considerably lower price tag.

If you’ve got any hills this is a feature worth looking for.

The 3D sieve system was the closest Claas got to a hillside combine with the Dominator range.

It uses a series of rams controlled by a pendulum to move the sieves fore, aft and side-to-side to help prevent grain losses.

Most manual Dominator 98S models were fitted with a Perkins engine.

However, the optional Mercedes engine (which was standard on the SL) is more powerful, cleaner burning and generally more desirable.

They are never quite the same after overheating, though, so make sure the cooling pack is blown out regularly.

What to watch out for 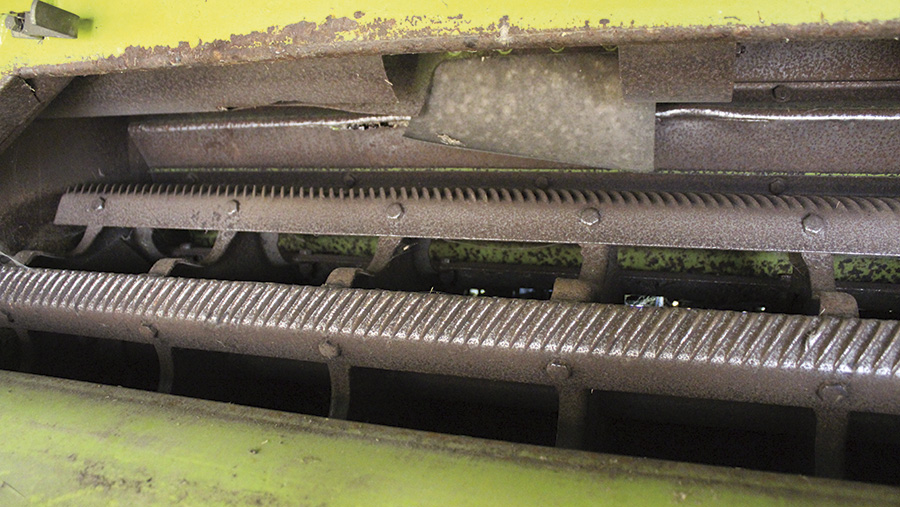 The impeller sits directly behind the drum and the blades can wear through. If you pull the drum cover off you should be able to look though the drum and spot any holes.

These cost about £350 to replace and the job takes about five hours, which includes the time taken to get the front elevator off. 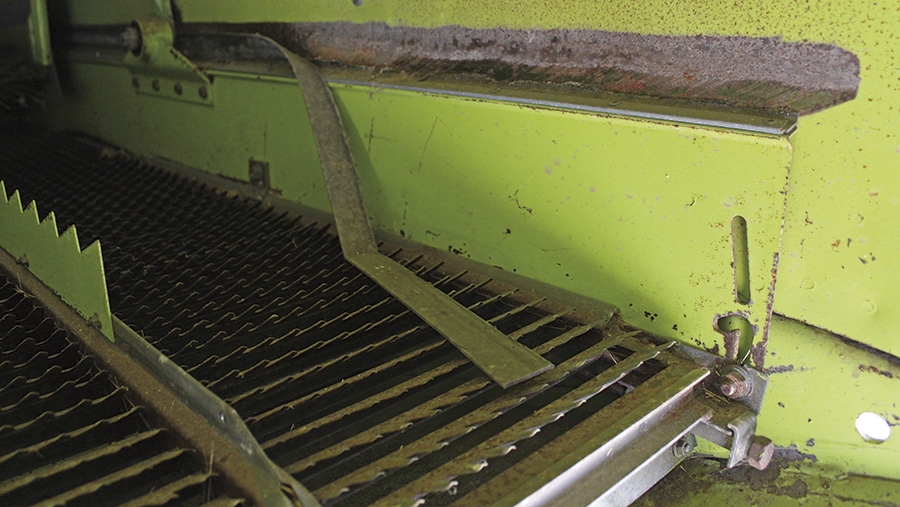 Rubbers that run along the sides of the grain pan and sieves can deteriorate and come off. If this happens you will end up with grain dropping through the combine on to the ground.

Replacements are cheap or you can make your own, but it is a fiddly job to do, particularly on the grain pan. 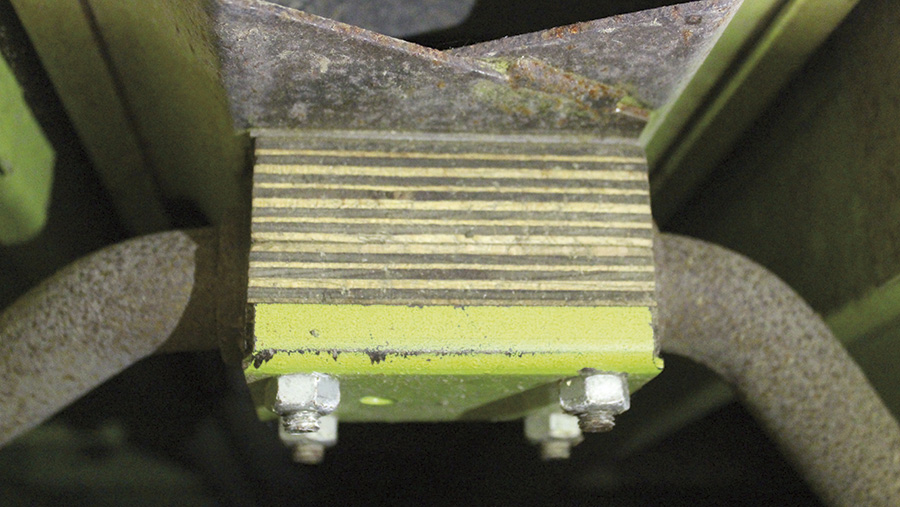 Grab hold of the straw walkers and check there is not too much play in the wooden crank bushes.

If there is a lot of slop, it puts excessive strain on the straw walkers so look for signs of stress fractures.

If all looks well, the blocks are simple enough to tighten.

Just don’t crimp them right up, otherwise they will run hot. 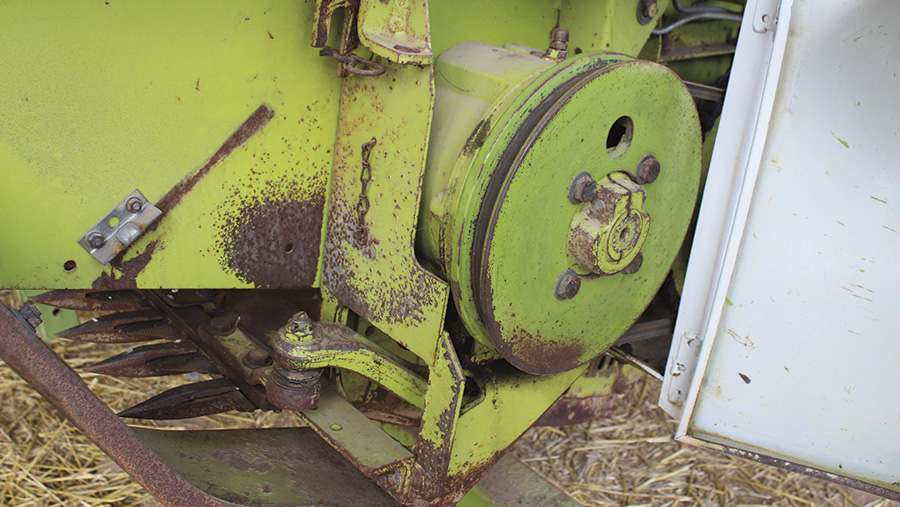 Wobble box knife drives can give trouble on the Dominator 98.

The best way to spot a problem is to put the header on, run the knife and listen for any clattering.

If there is a lot of noise coming from the wobble box then it could be on the way out. Replacements cost about £1,000. 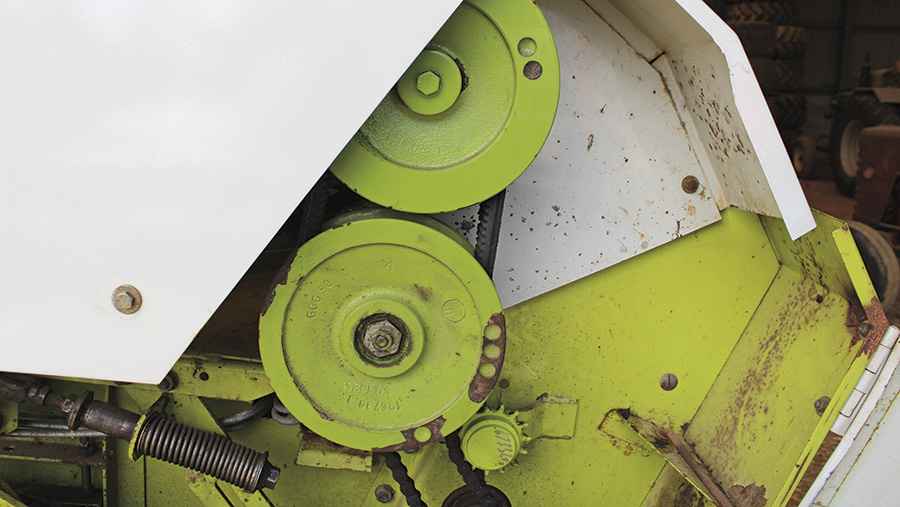 The pair of reel speed variator pulleys on the left side of the header are another common wear point.

Grab each of the pulleys, give them a wobble and check for play.

If there is significant movement, new shafts and pulleys will be needed. These should cost about £900.

The 98SL has got fairly simple electrics, but the buttons on the main hydrostatic lever can give up the ghost.

Luckily, they are not too difficult or expensive to change, but it’s worth running through all their functions to check for problems. 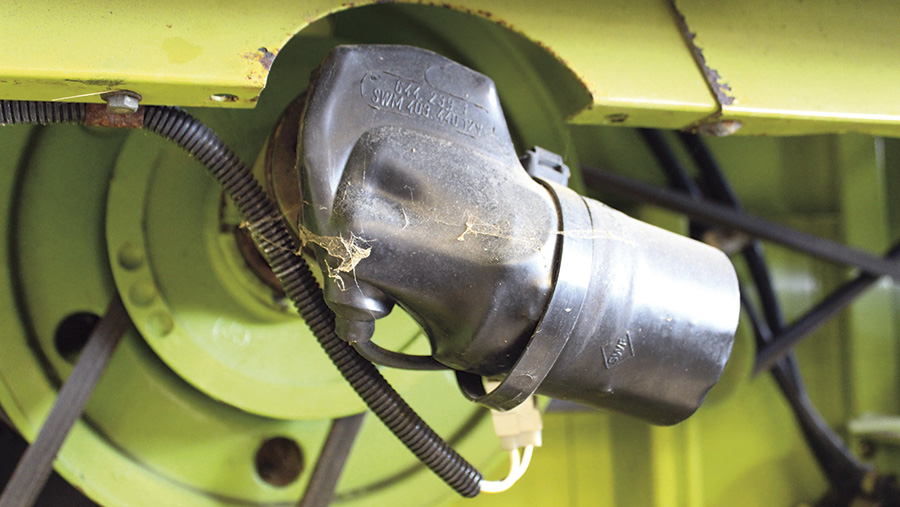 Claas used the same motor unit for reel and fan speed and both can stick over the winter.

Sometimes they will free off with a tight tap, but they can just as easily chew the internal drive gears off. 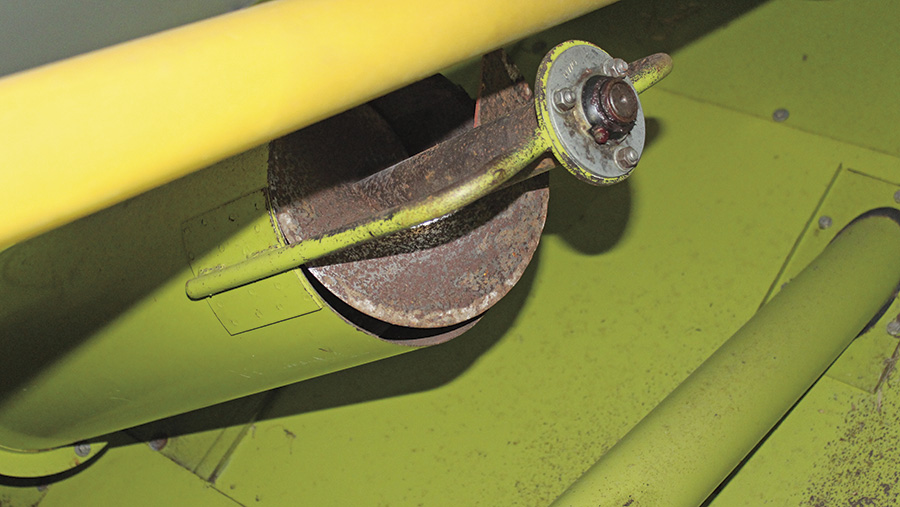 The top bush on the clean grain auger in the tank is another common wear item.

If you reach into the tank and grab the top of the auger you should be able to see if it is worn. 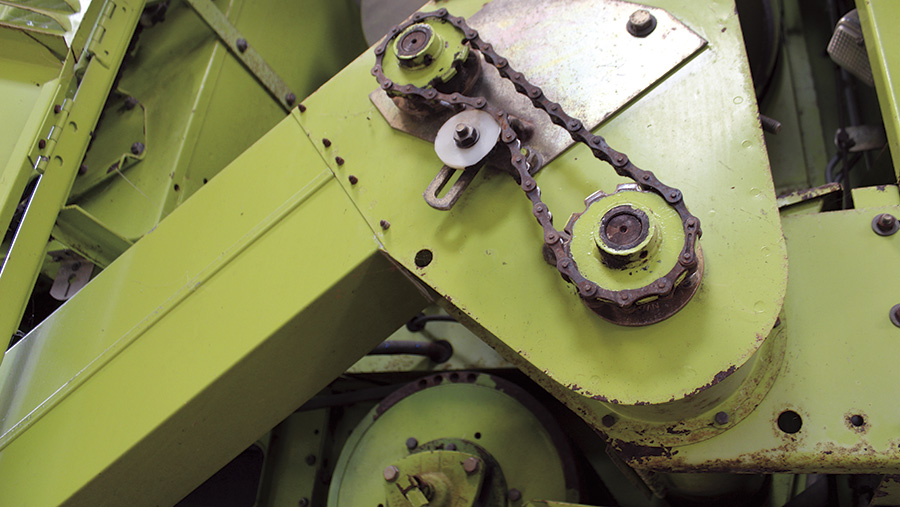 On high-houred combines the underside of the returns elevator can wear very thin, or even wear through. Have a prod around to see how thick the metal is.

Plating it up is an easy job, but it’s a good indicator for how worn the rest of the machine will be. 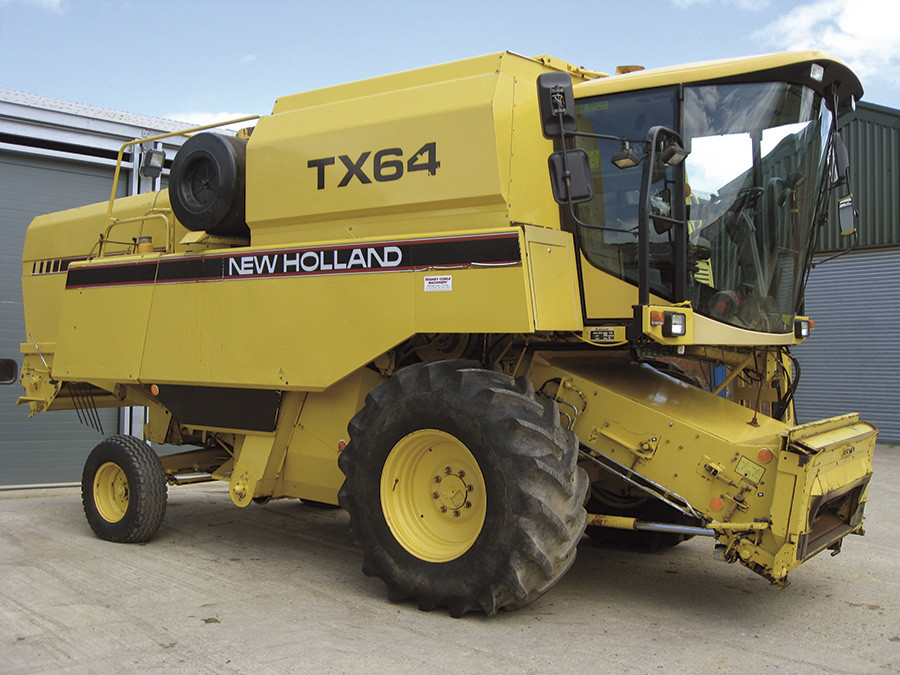 The TX64 is one of the most common five-walker combine in New Holland’s 60-series range and has three separation drums up front.

That makes it a higher-output and more sophisticated machine than the Dominator 98SL.

Complicated electrics started to creep in on these models, but there are some more basic lever-operated versions out there, too.

The TX64 was available with a fixed, lateral-float or auto-float table.

For headers wider than 16ft it’s worth looking for one of the floating versions.

The auto-float version makes life easier for the driver, but the radars can play up.

It is worth looking for a machine fitted with this, unless you are on billiard-table flat ground.

Unlike the Claas machines of this era that only had 3D sieves, the New Holland system moves the whole shoe to prevent losses over the back.

Later TX64s were available in Plus spec, which meant they had slightly more powerful engine and a few other small tweaks.

Picking a model with electronic controls means you have no levers cluttering up the cab and you get a passenger seat so you can bring a friend along for the ride.

The downside is there are a few more wires and computer modules to go wrong.

What to watch out for 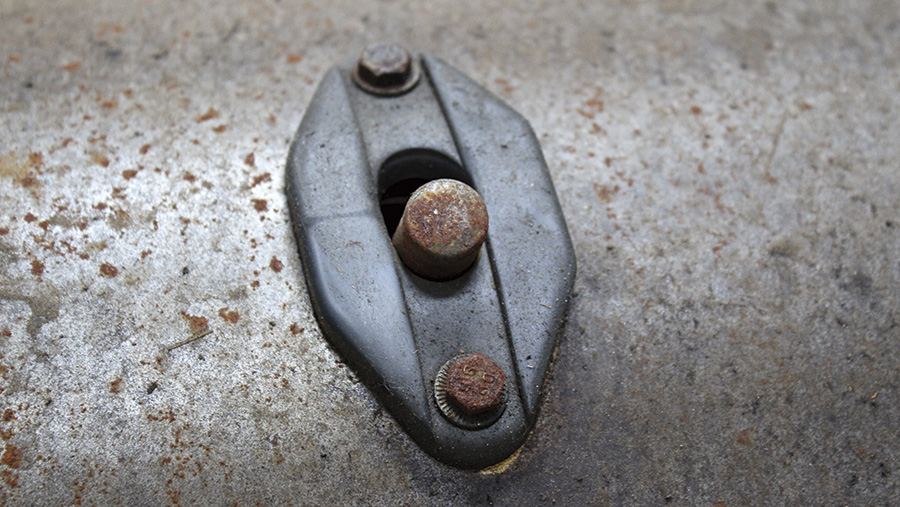 There is not a lot to watch out for on the New Holland’s header other than the usual wear and tear and stone damage.

However, it’s worth checking the condition of the retractable finger bushes.

Often these are left until they wear down to the bolt, which makes a simple replacement job a complete pain. 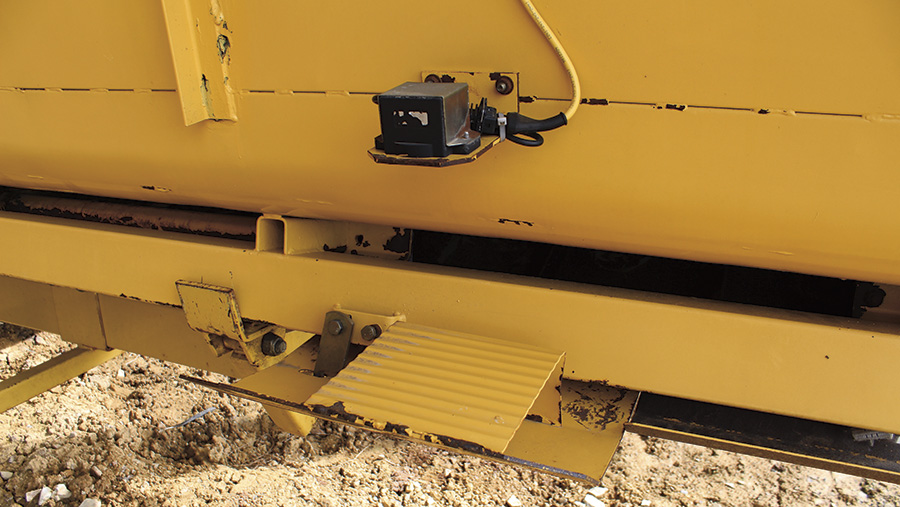 On combines with wider headers that don’t have contour-following, it is also worth taking a look at the condition of skids.

Often one side will spend a good amount of time cultivating so they could be worn or even ripped off. 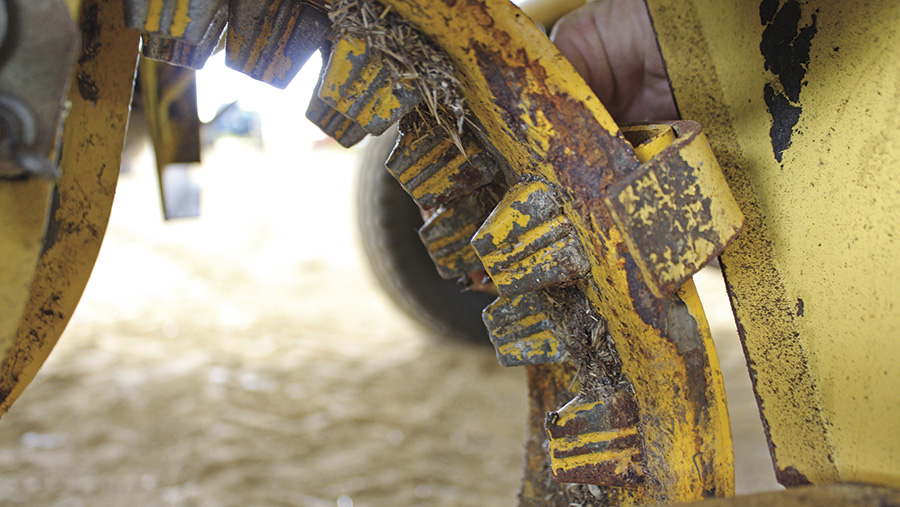 The rotary rethresher at the bottom of the returns elevator is a common wear item.

If you open the bottom elevator cover, you will be able to see the condition of the teeth on the rotor and the cover.

If these have worn flat, you could end up getting a dirty sample.

A replacement rotor and cover costs about £500. 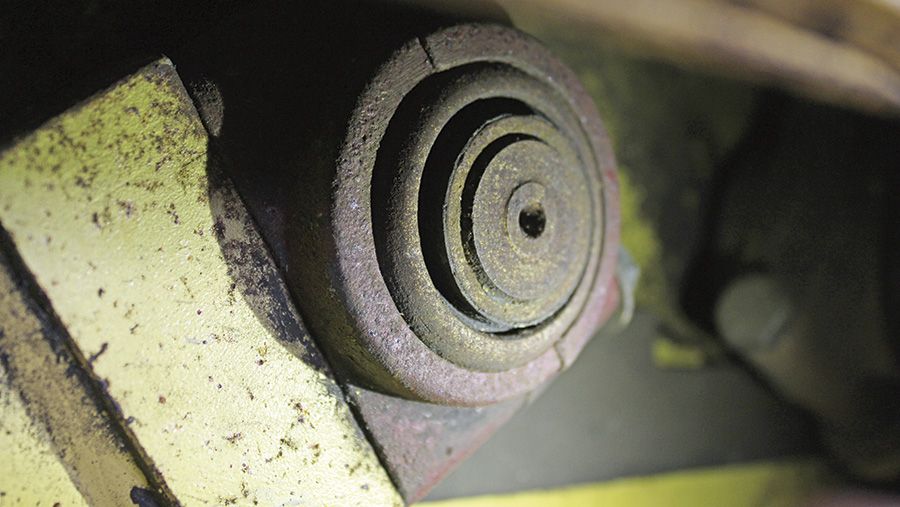 Shaker shoe bearings should be changed every 1,200 hours and if they are left until they give up, the rattling can cause cracks to develop in the shaker shoe.

Unfortunately, this is not that easy to spot, but you can inspect the condition of the bearings, which sit in channels up each side of the machine.

Also run the combine up and listen for any suspicious noises in that area. 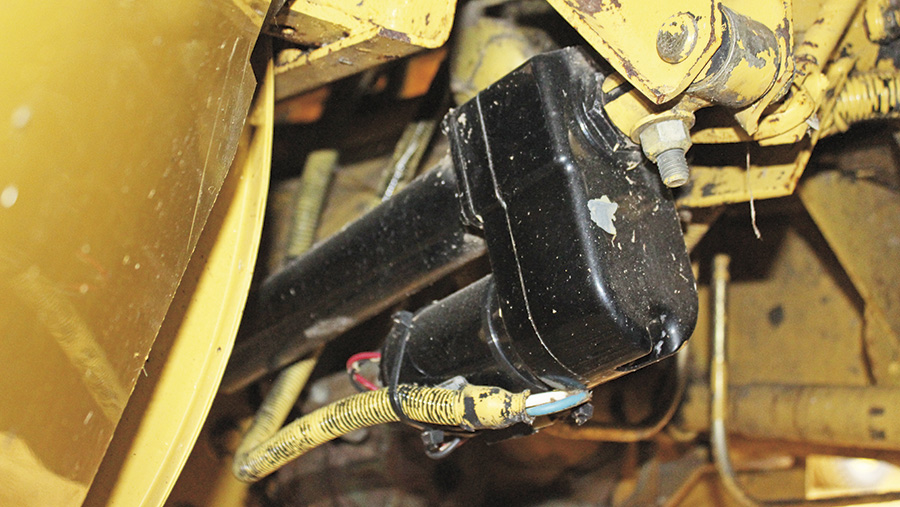 The linear motor for moving the self-levelling shoe sits on the right side of the machine and can wear out.

If you drive the combine onto a block you should see and hear this moving.

If it is spinning, but not moving, then it will need replacing. 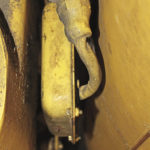 Dismantling and cleaning the unit often solves the problem. 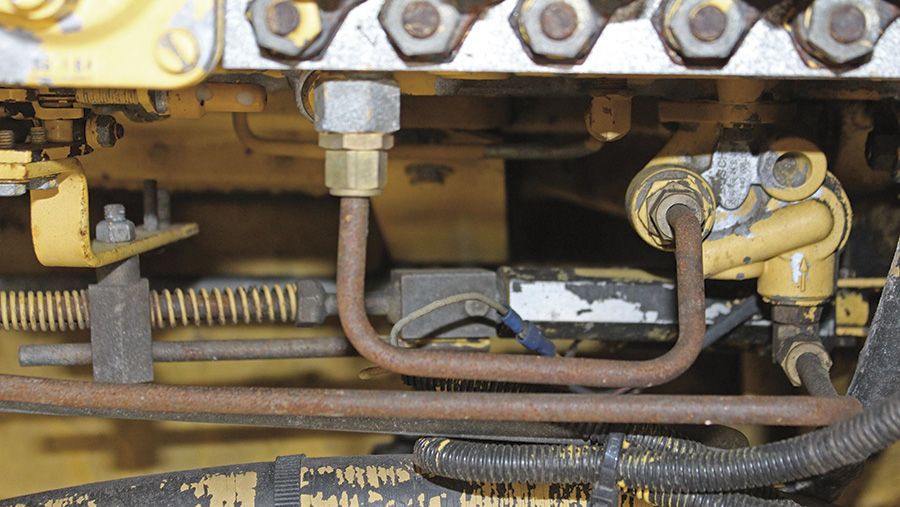 The TX64 has an electric throttle with a switch in the cab that controls a linear motor in the engine bay.

This can play up, so flick the switch and cycle through the different rev settings a few times.

If the linear motor is playing up it can be replaced for about £300. 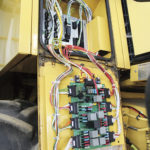 All of the New Holland’s electronic modules sit in a box on the right-hand side of the machine next to the cab.

This model is fitted with electronic switches for threshing, header and unloading, so there is a lot more going on in here than there would be with a manual lever version. Check the box is bone dry, dust free and there are no signs of rodent damage.

Thankfully, these electrics are fairly reliable and if the modules do play up they can be repaired. However, run through every function a couple of times to make sure they work. 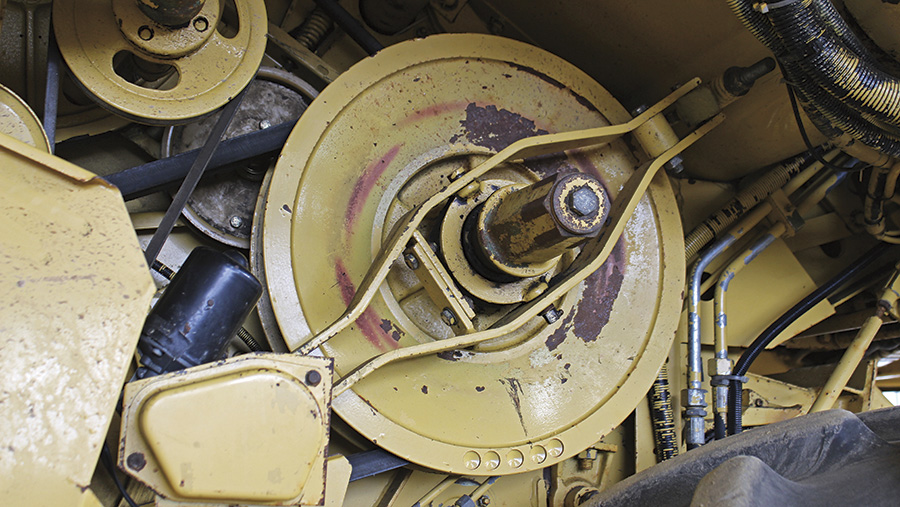 On high-houred combines the teeth on the drum pulleys can also wear, which will eventually cause the belt to slip.

This is almost impossible to spot without taking the belts off, so if the combine has done 3,000 hours or more it’s worth asking if they have been replaced.

Thanks to Rodney and Steve Cowle from Rodney Cowle machinery.