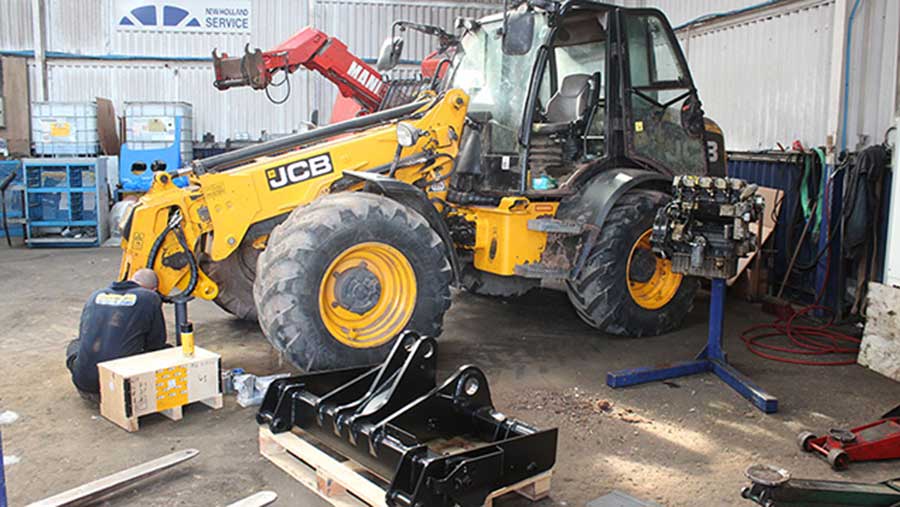 Love a pivot-steer but reluctant to splash the cash on a spanking new one? We get the lowdown on potential trouble spots on JCB’s bend-in-the-middle TM310S from Dai Thomas at Pembrokeshire dealer JE Lawrence

JCB has pretty much sewn up the pivot-steer sector over the past decade. Once a market filled with iconic machines from Matbro, John Deere and Manitou, the competition has slowly fallen by the wayside to leave JCB as the only obvious choice for diehard pivot buyers.

The TM300 was a fairly popular machine, but it was the TM310 – and the higher-spec S-badged versions – launched in 2007 that really made headway in the market. The model brought with it more power and torque than its predecessor, and closed the gap between telehandler and loading shovel.

Those improvements didn’t always work in the TM’s favour, in terms of loader life expectancy, anyway. Many livestock farmers wanted the performance of a 416 shovel for the price of a TM, so machines were pushed to the limit without the necessary maintenance to keep them running sweetly.

Pivot points are dependent on grease and, as you’ll see from our short guide, most of the trouble stems from a lack of servicing that is crucial if you are going to get the sort of longevity you might expect from an equivalent shovel.

Operators across the old Matbro territory in the South West, Wales and Ireland often have a cows-come-first attitude, so the loader is treated like the farm wheelbarrow.

It means some hit the second-hand market looking beaten-up, with 3,000 hours on the clock after just 12 months of service.

Such hard-worked machines should obviously be approached with caution if you are shopping for a second-hand model, particularly given the abundance of machines on dealers’ forecourts.

Exports to Ireland, Belgium and the rest of Europe have dried up because of the strength of sterling, while well-documented falls in milk prices have hit UK farmers hard and slowed sales to a snail’s pace.

That’s particularly the case in dairying regions that have traditionally been the pivot-steer’s bread and butter. JE Lawrence’s Pembrokshire postcode is a good example, where TM sales can account for 75% of all JCB sales. Check “The going rate” table below to see how second-hand values compare.

The headstock has the hardest time of all the TM’s components. Relentless bucket shaking above the mixer wagon takes its toll on the pins, and a lack of grease always exacerbates the problem.

The banana link and Z-link are the two to look out for. As the carriage pin rattles around, the holes begin to elongate and eventually shear the pin or tear the metal loop. A broken headstock is pretty much worthless.

It’s a pricey fix too, whichever option you take. You can try and re-bore the hole and then line it, which will cost about £900.

The only other option is a replacement headstock. Scribble a cheque for £1,800 and it’ll almost be as good as new.

Centre pivot joints come under serious strain on any bend-in-the-middle machine. Grease, again, is usually the deciding factor as to whether they stand the test of time or not.

If you can see the main boom pivot leaning towards the windscreen as you bounce across the yard then prepare yourself for the worst.

A good way to check is to push the headstock to the ground until it lifts the front wheels off the floor, then measure the distance from the window to the boom pivot. Make the same measurement with the wheels back on the ground – if the distance is more than 20mm then it is going to need replacing.

The chunky pin that forms the pivot costs £2,228 alone, and the two bronze bushes add another £550. If you are not mechanically minded then the bill could quickly drift towards the £4,000 mark once you have factored in labour.

JCB’s torque converter transmissions are generally sound, though they went through a slightly dicky phase pre-2009.

A manufacturing blip meant that some machines suffered with a bearing failure on the shaft carrying gears five and six. It is possible to catch it before any damage is done – look out for a loss of gearbox oil pressure that will mean the plates in the clutch pack aren’t clamped tight, which will cause the transmission to slip.

It was a pretty rare fault and was ironed out on machines built post-2008, which is fortunate because the fix is a palaver.

The entire transmission will need pulling apart, so while you are there it might make sense to replace the whole lot. Set aside as much as £7,000 for the job.

A lot of work on livestock farms happens round the yard, so high-houred machines can get through a couple of sets of boots a year.

Worn tyres often act as the prompt to trade in a machine, so expect to find a whole load of second-hand specimens with less than 40% left on the sole of their shoes.

Shifting straw and sawdust is guaranteed to block the air filter eventually. Provided you clean it out it shouldn’t be a problem, but let things get out of hand and the writing’s on the wall for the turbo.

Replacements don’t come cheap either – £1,500 is the going rate – but if the turbo disintegrates as it fails and works its way round the engine then the price will go up a few notches to cover the cost of a new block. It pays to schedule a few minutes each week just to blow the filter clean.

Dusty conditions can also wreak havoc with the cab heater/blower.Sawdust slowly collects on the heater matrix and condenser, forming a blanket that becomes so thick it will eventually cause the motor to burn out.

Fixing it is a faff – the seat has to be taken out and the air-conditioning system de-gassed in order to do a decent cleaning job. Set aside three hours to get the job done. A replacement cab fan motor costs £426.

Once you have pulled everything out it might be worth cutting out a section of tinwork around the heating matrix so it can be reached from the outside without having to strip everything down.

Finding a machine with a generous spec will probably pay off in the long run, and that’s particularly true of the cab.

Sliding windows are a must for year-round fresh air. If you are buying second-hand, it’s worth waiting for a machine with extra boom work lights and high-flow quick couplers on the headstock.

These extras weren’t always sold as standard and it might mean finding an extra £1,000 for the asking price, but if you are using it night and day it is probably worth it.

Broken trim panels are part and parcel of livestock farm life. The bonnet comes as one big fibreglass body and if it’s been beaten to bits then you’ll have to replace it before you sell. A new one costs £1,800.

JCB’s hydraulic system is fairly bombproof. If there’s one problem area it is fixing weeping pipes that run through the body of the boom.

To get at the steel pipework the boom needs extending and then splitting, which can be difficult without any hydraulic power.

The four steel pipes come as a welded assembly and are pretty cheap to replace, but for the uninitiated the job could well take longer than a day.