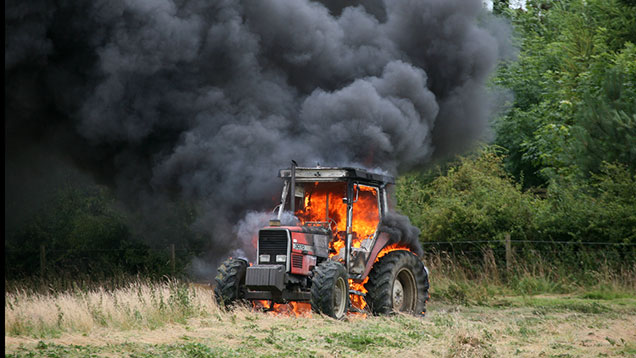 Farmers Weekly’s pick of the top 10 machinery mishaps from our long-running What’s in Your Shed series.

See also: Best of What’s In Your Shed map

“We once managed to derail a train en route to Hull. Thank goodness there were no casualties. Our Track Marshall crawler was going over a steep, unmanned railway crossing when the mole drainer dropped down and dug up the track. The crawler driver ran down to try and stop the train, but the driver didn’t stop. Luckily, the train didn’t overturn.”

“Getting the wrong instructions when tipping an artic load of barley at the docks last year which resulted in me tipping 15t into a cargo ship carrying about 20,000 tonnes of wheat.”

“Attempting to drive the tractor on to the A40, but taking the slip road for the M40 instead. I was stuck on it for 10 miles and had to weave in and out of the hard shoulder to dodge broken-down vehicles.”

Simon: “Taking a brand new mower out for the first time and destroying it on a manhole cover. It wasn’t pretty.”

Mark: “I once had a Tanco wrapper pop off the back of the tractor and demolish a parked car. The funny thing was the police let me off and did the owner for having bald tyres. I also had an incident when the local vicar got his car wedged under the forager header.”

“About two years ago when I parked the tractor and forage wagon on the yard of a farm we were renting. About five minutes later there was a sound like thunder and we rushed over to find an empty yard. The tractor and wagon had inched forward and disappeared down the steep lane jacknifing in the middle of the road. We pulled it back straight and the only damage was that the tyre had blown off the rim.”

“I fell asleep rolling some ploughing near Purbeck, Dorset. When I woke, I was looking at Portland Bay and the lighthouse, just metres from the cliff.”

Richard: “I don’t have many accidents, but when I do they’re usually good ‘uns.I once flattened an electricity pole with the tractor and took out the power to two villages.I also wrecked the unloading auger on the combine while trying to shunt it around the yard.”

Chris: “I once drove away from the artic fertiliser bowser without detaching the pipe and pulled the pump off the sprayer.”

“Tipping a load of straw on to a parked car in Alnwick. Regrettably the owner of the car also worked with my wife, so it was fairly embarrassing.”

“My brother Kevin backed into an irrigator with the combine, which made a hell of a mess. Mine, I guess, would be when I ploughed up a major gas line with a chisel plough. It took 15 men and $12,000 to fix.”

“I clipped a curb going round a roundabout with a full load of straw and tipped the whole lot over. The police were behind me at the time, but thankfully they got a call to split up a fight in Chesterfield so I got away with it. I demolished a lady’s garden wall, but the tractor and trailer were OK and I only had two burst bales.”

Fancy being featured in our What’s In Your Shed series? Email: fwmachinery@rbi.co.uk