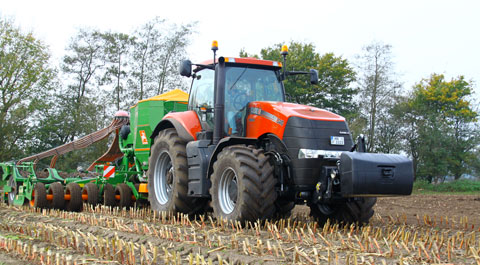 The Fiat engine performed well, especially under full load, and is in its element on heavy draft work. The engine-transmission automation system and mechanically efficient gearbox work in harmony with each other. However, the Magnum is no haulage machine – driving comfort on the road left a bit to be desired. Operation is simple. Trim finish and build quality could be better, especially in the cab. Base price £168,738

An Everest-like six-step ascent with good handholds gets you up to the cab. The seating position means visibility around the sides and out the back is good. However there’s absolutely nothing of the front linkage in sight thanks to the muscular bonnet, which can make life tricky at crossroads or bends.

The red leather armchair is very comfortable, although the suspension squeaked and the armrest waggled. Against this, the DLG recorded only around 71dB(A) at full power – super quiet.

The Magnum scored well for the layout of the armrest with its blister-pad controls – even though all buttons are the same shape. The chromed multifunction joystick offers a lot of clearly understandable controls – if only the buttons were a bit bigger. The test tractor had the new AFS Pro 700 touchscreen terminal with Isobus, although Case IH still hadn’t managed to integrate all of the settings logically.

Worklights are good, although the rotary control knob on the steering column seems old-fashioned. There wasn’t a lot of storage room in the cab. As on the NH, there’s a wiper for the billboard-sized right-hand window to avoid getting the cherry-picker out.

This Magnum shows its best strengths out in the field and doesn’t really score well on the road. The steering of Case IH’s own suspended front axle is very directly geared, requiring four turns from lock to lock and with a good 13m turning circle.

At 50kph in a straight line, however, its lack of precision doesn’t fill you with confidence.

The auto road software didn’t work that well on our transport route either. Sometimes, when you change down, the engine suddenly increases its revs to 2,400rpm. The mechanical cab suspension of the test tractor occasionally bottomed out, too, although Case IH says this can be adjusted.

Performance from the 8.7-litre FPT engine is good. DLG testers confirmed its thriftiness, especially under full power – 218g/kWh at boosted max power of 354hp at the pto with an additional 23g/kWh AdBlue.

The powerplant was very economical under partial load too. At a max draft power of 301hp, it managed 246g/kWh. At 89% efficiency, the powershift transmission was 4% better than the average of the stepless tractors in the test. However the accelerator pedal was too sensitive on the test tractor.

Magnum drivers will be familiar with the hand throttle slider on the Multicontroller joystick. As with the NH, the two rpm presets (activated by the headland button on the joystick) act as governors with the driver setting a maximum rpm.

As soon as the transmission auto function is activated the hand throttle lever becomes the controller and revs are set independently from the hand throttle. We would have preferred the clearer separation of functions found on Case’s smaller Puma tractors.

The engine is positioned over the front axle, with a drop box bridging the height difference between it and the transmission. This is the key difference between the Magnum and NH T8, meaning that the red tractor ends up 35cm shorter than the bulkier blue bruiser.

The 50kph powershift transmission has 19 forward gears (three ranges of six gears plus one overdrive) and only four to carry it backwards. There was something of a delay in the shift between six and seven.

Having a direction change button on the Multicontroller is good. The new shuttle lever on the steering column appealed to us somewhat less, however. First of all, the button at the top of the lever has to be pushed in order to shift into neutral. If this is moved forward by mistake, the handbrake is activated.

The engine-transmission management changes not only the gears but also regulates and adjusts rpm. There are two programmes: road and field.

However the current software for the transport mode didn’t really impress, with the result that, like the New Holland, we’d always opt for manual when on the haul. Even after trying a range of different settings, the engine rpm rose very high at times (2,100rpm) before the gear changed.

In the field, performance was completely different. Under heavy load, shifts were butter-smooth and happened at just the right time, almost like a stepless transmission. Controlling the travel speed of the tractor (both revs and gearbox ratio) is done simply by sliding the Multicontroller forwards and aft. The computer works out the rest.

Automatic activation is speed-related (“off” over 16kph, “on” below 13kph) and related to steering angle as well as link-arm position. The latter is not really practical and on top of this the activation position is set too deep.

Like its blue brother, tyre size is limited to 2.05m – but with the launch of the Magnum CVT, Case followers will be able to choose chunkier boots.

The Magnum has oil reserves of up to 93 litres and the pump blasts out an impressive 236 litres/min. In terms of power, oilflow equates to 82hp.

Linkage operation via a multicontrol button is easy, with double clicking pausing the lower links. Also, for mounting implements, there are two buttons on the armrest that function just like the external controls.

We like the fact that all settings (depth, lift height, drop rate and so forth) are adjusted by rotary dials. Another good feature is the hydraulic lockout switch. First stage: Everything runs free. Second stage: The spools pump and the linkage is locked. Third stage: Both are locked.

Hoisting around 11.3t on the link arms, the Magnum is top of the class for lifting power.

The test tractor had four fingertip paddles, buttons for a double acting valve on the Multicontroller and a cross-lever (all with a float position).

Handling up to three spools (with a button-operated third service), the cross-lever can be switched to handle either front or rear valves – ideal for things like buck-raking.

Like the New Holland, hydraulic settings can be carried out via the monitor and the rotary knob under the armrest lid, plus the display on the cab pillar. If the hydraulic symbol is tapped on the monitor you get direct access to the adjustment screen.

The amount of oil flowing in both directions and the timing can be set independently. Lever detents can be a bit sticky, though.

The test Magnum came with only one 1,000rpm pto shaft (1,000/540 optional). The yellow throw-switch looks like an add-on on the armrest – that’s confirmed by the fact that rpm is shown only on the A-pillar display, not on the monitor.

There is, however, an auto-pto function, although there’s no LED on the blister button cluster to indicate whether or not it is active. Both the engagement point and soft-start settings can be adjusted, although this is barely possible without an instruction book.

Buttons for external control are on both mudguards; for continual activation they have to be depressed for more than six seconds.