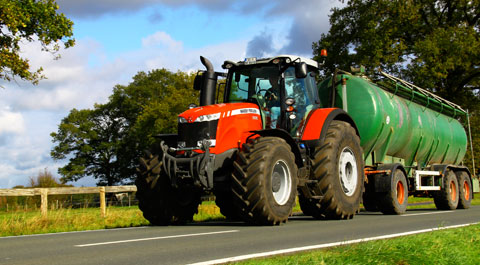 Good transmission and driving comfort. The Sisu engine kept up with the test averages. Easy working thanks to effortless shuttle change, roomy cab and SpeedSteer system. Computer controller not the most easy to use for changing settings. Noise levels above group average. Base price* £215,216

Beige trim lines the interior of the roomy four-pillar cab – it feels warm and cosy enough, if a little dirt-sensitive. However, at 79dBA, it was the noisiest cabin on test.

Unusually for tractors of this size, there’s access through both the left- and right-hand doors. With just one large cubbyhole to the left of the seat, there’s a shortage of stowage space.

A skylight brightens the atmosphere and all-round visibility is top class – the lower links are on view right to their lowest position. However the bonnet restricts the line of sight to the front linkage.

There’s automatic car-type climate control on tap, however it is a little too loud.

The multifunction joystick Massey fits to its 7600-Series tractors is not yet available for the 8600s. Most controls are currently clustered on the armrest; more functions have moved to the Datatronic terminal, although many of these can still be adjusted with buttons on the instrument panel.

Overall, we found navigation tricky through the various menus on the non-touchscreen terminal. There are 12 buttons and a rotary dial to scroll through the pages.

The big Massey’s cab suspension is adjustable, although we were unable to feel any real difference between the various positions. On rough surfaces the cab rocked about a bit and an active seat is an option.

On the road, the steering felt a little nervous, but otherwise driving comfort was first class. If the throttle pedal is set too sensitively, engine revs can suddenly rise when going downhill. Set it in middle position, and the drive is more steady.

Normally the steering wheel needs four-and-a-half turns from lock to lock. Activate the optional SpeedSteer system and this drops to only 1.3 – ideal for headlands. Like the Valtra, the MF had a turning circle of 12.8m – the most manoeuvrable on test.

The brakes were top-class and it’s a nice touch that the park lock is integrated into the shuttle lever.

Now officially tagged as Agco Power, the 8690’s 8.4-litre engine is sourced from the Finnish firm that provides a good proportion of the engine requirements of Agco’s four key brands. It pumps out 338hp at the pto, but there is no boost.

Specific fuel consumption at maximum power is 224g/kWh, fractionally lower than the average of all the tractors on test (225g/kWh without boost). On top of this, however, is 21g/kWh of AdBlue.

Taking the average from the six test points of the partial loading cycle, the engine performed well: 231g/kWh compared with the group average of 235g/kWh. But here, too, we have to take account of 21g/kWh urea use.

Max draft power was 277hp – alongside the almost-identical Valtra, this was the lowest on test. At maximum pulling power, its thirst of 268g/kWh (+ 25g/kWh AdBlue) was slightly above the average (266g/kWh) for the stepless transmission tractors.

There are two simple preset engine speeds on the armrest, easily programmed by holding down the button to store the current rpm. Altering it is more tricky and requires the driver finding the relevant computer menu (we miss the old + and – rocker switch). There’s proper hand throttle with a limiter that can also be set via the monitor or a twiddly dial.

Dubbed DynaVT by Massey, the stepless transmission and rear axle are the same as on the Fendt and the Valtra. But MF, just like Valtra, has tried to put its own stamp on the metalwork by developing its own in-house software. An orange thumb-button on the side of the T-bar control lever switches between ranges I and II (max 50kph).

Driving style is selected with two orange buttons. The first offers a classic drive CVT mode using the throttle and the control lever or allowing MF’s automatic DTM engine-transmission control to take over (much like Fendt’s TMS).

The second gives a choice of drive pedal or lever in DTM. On top of this there’s a forage-harvester mode that aims to maintain a constant pto rpm by varying transmission ratios. The selected mode is not displayed on the monitor – only on the dot-matrix digital dash display.

There are plenty of further transmission settings including shuttle aggressiveness and throttle pedal sensitivity. The DTM system can be coupled to the pto, hydraulics and/or linkage. Engine rpm then increases as soon as the function is activated. But in the test we couldn’t switch this off.

There are two cruise control speeds in each range – giving four in total. They are easily set with a knurled wheel. The only problem is that cruise control buttons and setting wheels aren’t grouped together.

As always, we love MF’s trademark shuttle lever which, as well as initiating direction changes, can be nudged forwards or backwards to slow down or speed up the transmission, can be lifted to declutch and also hosts the integrated park-lock. But there is no option to shuttle backwards and forwards with the right-hand armrest controls.

Simple buttons on the right-hand console select automatic and permanent four-wheel drive and diff-lock. Automatic four-wheel drive kicks out at 19kph or when the steering angle exceeds a predetermined point.

This is the way it should be. In addition to this, diff-lock is engaged and disengaged as the linkage lifts and lowers.

To operate the external controls, the in-cab linkage control has to be in its neutral position. Up until now Massey has stuck with a good old three-position (up/stop/down) rocker. On the 8690, however, that’s been ditched in favour of three buttons – not a good move.

Activating the controls is a convoluted process. However, MF continues to use idiot-proof rotary dials for the key linkage settings – secreted under a lid on the right-hand console.

In front of this are LEDs to indicate linkage activity – when ploughing, if the up and down lights flash alternately you know you’ve got everything set just right. Unfortunately, the depth control wheel doesn’t have a proper stop and can be unintentionally knocked.

Rear lift capacity is fine at 10t, but the 4.2t-rated load capacity is on the low side. Front linkage is integrated into the sculpted chassis.

The test tractor had six spool valves – four on fingertip paddles and two operated by a stubby cross-lever. However, the colour-coding has been abandoned and, illogically, the valve numbering runs from right to left and is only flagged up by a single label on the inside of the rear mudguard.

Buttons on the cross-lever can be assigned functions via the monitor – cruise-control, rpm presets, headland management or further valves.

The hydraulic pump shifts 170 litres/min. Maximum flow per valve is 109 litres/min – the lowest in the test – but the available oil reserve is good at more than 100 litres.

Speed selection (1,000 or 1,000Eco) is done with a button under the console cover, but there’s no light or indicator to show which one you’ve selected.

The main on/off switch on the armrest is good, with the button for auto-mode positioned directly in front. External operation is from the left-hand mudguard.