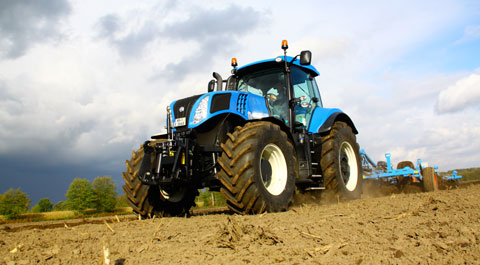 Fiat engine very frugal on fuel – but AdBlue is also required. Good performer in the field for heavy draft work, helped by effective engine-transmission management software. Like the Magnum, operation is very simple. Only during road transport were we less than enthusiastic, despite its longer wheelbase. Base price £165,561

Six steps lead up to the lofty, blue-trimmed cockpit. The colour scheme might be uplifting for the soul but is pretty quickly dirtied. Trim quality is average – the passenger seat was already loose.

Thanks to its five-pillar design (three on the left, two on the right), views from the seat are good. Thankfully there’s a wiper on the vast right-hand window as it’s almost impossible to clean without a ladder. You’ll still need a stack of encyclopedias to reach the plasticky toolbox, though.

We liked the clear layout of the electrically adjustable Sidewinder armrest. The blister buttons for the most important functions are gathered in a crime-scene-style chalk outline of a tractor.

Sprouting from the front of the armrest is the IntelliView III monitor. It shows just about every tractor function but only a few hydraulic and transmission settings can be altered via the touchscreen. Menu navigation isn’t the most simple.

The longer wheelbase means the turning circle extends to at 13.9m – almost 1m larger than the Case IH’s. On the road, though, the tractor profited from the longer wheelbase, riding more comfortably than its red stablemate. Despite front axle springing and mechanical cab suspension, driving comfort is below the test group average.

The Fiat Powertrain (FPT) engine scored good marks for performance. Boosted maximum power was 350hp and that at a very economical 219g/kWh specific fuel consumption. However you need to add the 23g/kWh urea usage for the SCR system to that.

At an impressive max draft of 298hp the New Holland was also easy on the fuel, burning 248g/kWh. There’s no question that this tractor is in its element with heavy draft work.

With an average consumption over the six-point partial-load test, consumption hit the test average smack on the nose at 235g/kWh plus 23g/kWh AdBlue.

The tractor features a separate hand throttle and two programmable rpm presets which act as limiters with the throttle slider rammed right forward. However, as soon as the pto is running or the gearbox is set to auto mode, the joystick buttons take revs straight to the required speed – an altogether better set-up. Altering the presets is simple with +/- keys.

One of the key differences between the T8.390 and the Magnum is that the former has an especially long wheelbase, the engine lying behind the front axle in line with the transmission.

With a transmission efficiency of more than 89%, the T8.390 was top of the test group. The powershift transmission offers 19 forward gears (three ranges of six gears plus an overdrive) and nine of the gears are in the working window between 4kph and 12kph.

There are only four reverse gears. Shuttling can be done with either the conventional column-mounted lever or with a button on the joystick. However there’s no neutral position for the stick – for that, the driver has to press the button on the lever. We found it could sometimes mistakenly be shoved forward into the park position.

Auto mode is activated by a button on the joystick. A single press takes the box straight into field mode; a double-click shifts it into street setting. A display on the cab A-pillar shows what’s what.

The driver sets the target travel speed via the hand throttle or the gas pedal but the latter was too sensitive for this type of work on our test tractor.

We had conflicting views on the automatic transmission. In the field under consistent load, shifts are top class and gentle. However, it’s too rough and aggressive on the road, especially without a trailer in tow.

It’s theoretically possible to fine-tune shift sensitivity through the terminal, but we found it hardly made any difference. Sometimes during a downshift revs shot up as the transmission paused to get its cogs in order; a big jolt then followed as it took up drive once more.

The buttons for the four-wheel drive and diff-lock manual and auto modes are clearly marked on the instrument cluster. Auto four-wheel drive is disabled by steering angle and a preset speed.

At 14kph this is too low for jobs such as stubble cultivations and it can’t be altered, even by New Holland fitters. Auto diff-lock kicks out as the linkage is lifted.

The New Holland T8.390 can only be equipped with tyres of up to 2.05m diameter (2.15m for MF, Valtra and Fendt). However, we’re told that the recently launched stepless T8 AutoCommand tractors will accommodate bigger rubber.

Our test tractor was fitted with the standard hydraulic pump which pushes out 178 litres/min. There is also a 274 litres/min version on the options list for £1,128.

Max oil flow through each spool slice is a superb 153 litres/min and oil reserves for tipping trailers and the like is an equally generous 93 litres.

Linkage lift capacity of 9.5t was a little lower than the competition but in reality that should always be enough, especially when you consider the big tractor’s rated load carrying capacity is just 6t (unladen weight is fairly high at 12t).

As is typical with New Holland, the electronic hitch control is somewhat overcomplicated. While a standard slider sets the depth, there are different dials for draft sensitivity and the amount the arms will move under draft control – we found the other tractors’ simpler systems easier to fathom.

On the plus side, everything can still be adjusted by dials and switches without having to delve into the cab computer.

Buttons in the control cluster help with attaching implements, working just like the external controls. The only thing missing is a button for locking the linkage. Instead, there are two rocker switches for quick raise and lower – one on the joystick and the other on the depth control.

Up to six spools are operated by four fingertip paddles and a cross-lever. Two can be assigned to a four-way thumb-toggle on the joystick.

Slight alterations to hydraulic settings can be done directly on-screen – at least theoretically. But numbering of the valves wasn’t correct in the software installed in our tractor. As an alternative, a dial under the armrest lid is twiddled and clicked to make the settings which show up on the display on the right-hand cab pillar.

Soft start settings can be adjusted although it’s difficult to work out how. Pto speed is shown only on the cab pillar display and is not integrated into the monitor making it feel like it’s very much a bolt-on for this US-built machine.