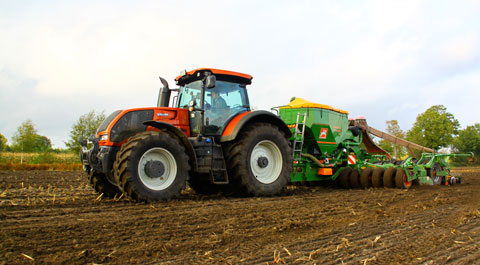 Good driving comfort and transmission. Transmission operation differed from the rest so took a bit of getting used to. Room for improvements in ergonomics and especially in-cab monitor. Noise above group average. Comes with the option of reverse drive ex-works. Base price £175,611.

Thanks to the lack of a roof window and grey trim, the Valtra’s four-pillar cab feels smaller than that of the MF. At just under 79dBA the noise level is, like the MF’s, higher than the other test candidates’.

Storage is good and the loud air-conditioning unit is very efficient. All-round visibility is also impressive, although the bonnet restricts the outlook a little. Valtra’s time-proven TwinTrac reverse-drive system is an option, too.

It was in the ergonomics department that the S353 came in for criticism. The switchgear is shared between the side console and armrest and isn’t particularly logically grouped. Labelling is poor and sometimes illogical.

Some functions are tagged the same – “Cruise” is used for engine speed presets as well as travel speeds. On the other hand there are different labels for the same function – “A” and “B” double up with a tortoise and hare for the gearbox ranges. A rocker-switch labelled “Auto Control” deals with the linkage. There’s no multifunction joystick, either.

The layout of the small amber-coloured monitor is divided into three. In two of those areas the driver can select the information that should be displayed using an arrow button to navigate. But the menu system is not very logical.

The steering takes 4.5 turns from lock to lock and with its 12.8m turning circle, the Valtra was one of the most manoeuvrable tractors in the test.

In the field the steering gearing can be altered by a dial to reduce the number of turns.

Cab suspension is adjustable, although we noticed no difference in ride quality – it was generally good. Only on very badly surfaced roads did the cab start to rock.

The Sisu engine delivered a maximum of 338hp at the pto – there is no boost. At maximum output, fuel consumption stands at 224g/kWh – fractionally lower than the group average of 225g/kWh. AdBlue consumption was 21g/kWh. The engine performed well on average over the six-point partial loading test – 231g/kWh.

The hand throttle is a twiddly dial with two presets on the side console. To programme the current rpm the button has to be pressed for more than three seconds; if you press for two seconds you activate the programmed speed.

Because of that, it’s easy to inadvertently lose the presets. Worse than that, they’re wiped every time the ignition key is turned. Simple +/- buttons for altering rpm are a bonus, however.

Although Valtra shares the Vario stepless CVT with Fendt and MF, the Finnish operating system is completely different. Changes between the two mechanical ranges, for example, are done with buttons on the right-hand console.

Meanwhile, two cruise-control speeds are dealt with by buttons on the armrest with similar +/- push-switches for adjustment. Pushing them for two seconds activates the system; holding them a little longer overwrites the preset.

A small slider lever tucked away on the underside of the armrest covers a number of functions, but there isn’t a classic joystick.

The S353 offers three drive modes, but it always starts in automatic pedal mode. The speed range for the pedal is chosen using the slider – as soon as the driver activates cruise control, the lever can be used to alter the speed. If the lever is right forward at activation then the speed can only be reduced. In mid-position, it can be raised or lowered.

In the second SemiAuto mode, engine speed and gear ratio are set in a linear relationship. The small lever can then change the steepness of the resulting curve. Do we really need all this? We couldn’t think of an application.

The third mode covers manual driving – the driver decides on the speed and regulates the transmission ratios.

Droop (the amount engine speed can drop before the system alters transmission ratios) can be set in full auto mode on a scale of 0-10 (10 represents 30% engine loading).

It’s also possible to adjust engine braking and the speed of forwards-reverse shuttling. Access to the menu is awkward, until you realise what the unlabelled black button next to the shuttle is for – it gives direct access to gearbox settings.

The shuttle lever itself is super. It’s silky smooth, thanks to roller-bearings and offers a clear neutral position with a definite notch before it can be pushed into the park-lock position.

Another good feature is that the relationship between forward and reverse speeds can be simply altered via a rotary dial on the side console. You can’t change direction using the armrest controls, though.

Briefly pressing the four-wheel drive or diff-lock switch activates automatic mode and a small light on the instrument panel. Auto disengagement is speed-related (19kph) only, with diff-lock also knocked out by linkage lift.

If the four-wheel drive switch is pushed for longer, it remains engaged and when you pull away or change direction, four-wheel drive kicks in for a period of 1-20sec. Big rear tyres of up to 2.15m diameter can be fitted.

The hydraulic pump puts out 170 litres/min and maximum flow per valve is 109 litres/min. This is the lowest in the test. On the other hand, the tractor had an available oil reserve of 100 litres. The rear linkage lift is fine at 10t, but the rated linkage lift is low at 4.2t (although higher when the tractor is limited to 40kph).

An on/off button on the console switches the transport shock absorber on. All other adjustments are carried out via rotary dials.

The mudguard buttons only work when the AutoControl rocker-switch on the armrest is at “Stop” or “Lower”. The front linkage is completely integrated into the chassis.

There is a cross-lever for two spools and paddles for four others. Through the squint-inducing display, the engine can be prompted to speed up when the hydraulics are activated – this makes good sense.

Below the armrest screen are two dials. The first activates the cross lever with “Off”, “Front Hydraulic” and “Rear Connection” settings.

The second has six positions: all valves at 5%, 50% or 100% flow and three programmable memories for timing and flow setting for all the valves. The spools can be locked independently or centrally either by button or automatically at a preset speed.

A 1,000rpm pto is standard, plus the choice of either 1,000Eco or 540Eco. This is simply changed via buttons on the rear cab pillar.

Using the display, the right engine speed for the pto can be preselected. The auto activation switch is behind the driver on a cab pillar.