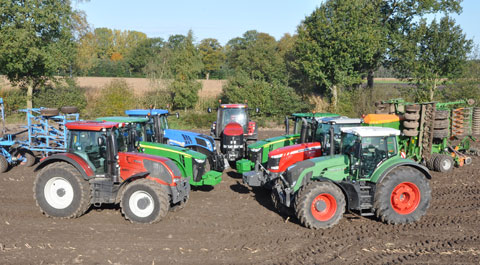 We’ve gathered together the most powerful wheeled tractors on the market for a monster multitest. And for the first time ever we’ve looked at the running costs of all the technology being used to clean up what’s coming out of their exhaust stacks as well as how they really perform in the field.

It’s a trial of opposites: AdBlue against particulate filter, stepless transmission versus powershift, heavy draft workhorse takes on all-rounder. Seldom has a test proved such a challenge for the test team.

It has taken us more than a year to pull everything together, such was the complex nature of the project, from field testing through to getting each machine through the DLG tractor testing station in Germany. The reason for this complexity was that all candidates had to comply with the strict new Stage IIIB or Tier 4i exhaust emissions rules.

Which makes did we test?

The three Agco brands – Fendt, Valtra and Massey Ferguson are only available with stepless gearboxes in this power class, so that’s what we tested.

John Deere offers powershift and stepless AutoPowr in its 8R-Series tractors, so we tested both.

CNH marques Case IH and New Holland only had full powershift boxes on offer, so we tested those.

Stepless Magnum CVXs and T8 AutoCommands were not available for testing. Similarly Claas had only pre-production Axion 900s at the time and because of this did not take part in the test.

The European-built tractors (Fendt, MF and Valtra) are more compact with less overhang on the nose and a linkage integrated into the front frame. They are also lighter, weighing 1-1.5t less than their American counterparts. The powertrain in the MF and Valtra is identical so the DLG only tested the MF.

The US-built machines are clearly designed as heavy draft workhorses. The Case and JD have a much more pronounced overhang, with engines positioned over the front axle. The New Holland has a longer wheelbase with its motor tucked behind the front wheels.

We’ve split the test between powershifters and stepless transmissions. Click the links below to see the results for each tractor.

Manufacturers often publish power output figures without any engine accessories attached. Without the fan, water pump, alternator, and so on connected, the big question is just how much of the “brochure power” actually ends up at the pto.

As a test average, a rated output of 348hp actually ended up as 315hp at the shaft. Max power is really the more interesting figure and the average of all the tractors on test (without boost) was 346hp at the pto. The Fendt recorded 376hp.

With the Deere tractors the boost had less of an effect on final output at the pto (+6hp and +10hp). Fendt, MF and Valtra offer no boost.

While they both use the same engine, the CNH tractors appear to differ on paper. Case emblazons the bonnet with rated power (Magnum 340 EP), while New Holland uses maximum power with a stripped-down engine working under boost (T8.390). In reality performance is the same, with a 30hp boost taking average output up to 353hp.

Specific fuel consumption was our key area of interest and there was no clear test winner here. At max pto output without boost the Fiat engines of Case IH and New Holland achieved the best results with 219g/kWh (group average: 225g/kWh).

This lead continued for draft work too with 246g/kWh and 248g/kWh, respectively. However AdBlue consumption of 24g/kWh needs to be taken account of. This leaves the SCR-free Deere 8335R looking pretty good with 224g/kWh at max pto output and 252g/kWh under max draft loading.

Tractor work is so varied that full power is not always required. To cater for this the DLG records average fuel consumption at six different points in the power curve. Here the Fendt 939 Vario scored best with a specific consumption of 229g/kWh (group average: 235g/kWh). Added to that was 26g/kWh of AdBlue.

Under full load the powershift tractors have the advantage. In heavy draft work, the mechanical transmission models were 6% more efficient than the stepless ones. Out in the field under full load, that equated to a saving of almost 5 litres/hour (not including AdBlue).

With the changing speeds and partial loads of transport work this advantage melts away because the stepless transmission suits such conditions much better.

Auto-shifting differs between the three powershifts. The Deere changes only three gears, depending on load. Things are different with Case IH and New Holland where the auto gear change set-up employs true engine-transmission management. All the driver does is select the speed and the system notches up and down accordingly, albeit a little jerkily.

Out on the roads the tractors with full powershift are not as smooth as the stepless ones. The auto shifters change mercilessly through all the gears and rev to the peak in each, especially when changing down. In the field under heavy draft performance they are markedly gentler. Here transmission snatching is hardly noticeable and driving comfort is better.

The powershift transmissions are simple to operate – there’s hardly any scope for adjustment but that’s not necessarily a bad thing. It means less experienced drivers can fully exploit the potential of these tractors.

It’s a little different with the stepless machines. To get everything out of them the operator has to go deep into the computer controls.

The test team were looking for simple and logical four-wheel drive and diff-lock activation. Steering angle linked with speed proved the best in the automatic control of both traction aids. That’s the route Agco and CNH brands take while JD sticks with traditional pedal activation, unless the driver programmes it into the headland management system.

These big tractors pump out serious volumes of oil – the test average was more than 200 litres/min, with the Deere tractors leading the pack at 240 litres/min. MF and Valtra deliver 170 litres/min. The CNH tractors, which had different pumps, gave different results. The DLG recorded 236 litres/min from the Case, while the New Holland pumped out 178 litres/min (a pump upgrade is an option).

Available oil reserves ranged from 50 litres for the Deeres up to 100 litres for MF and Valtra. For valve throughflow the CNH tractors topped the league with up to 150 litres/min through one spool, with MF/Valtra managing 109 litres/min.

On all test tractors oil flow and timing is adjusted through the in-cab computer. Rear linkage lift capacity averaged around 10t.

When it comes to linkage control, MF and Valtra continue to offer dials for the basic functions (drop-rate, lift height, position control), which went down well with the old-school test crew.

With JD and Fendt all adjustments (except working depth) have to be made through the computer console. Although not as speedy as a simple dial, you quickly get used to this. That’s especially true with the Fendt and Deere touchscreens because just a press on the function symbol brings up the appropriate settings page. Case IH and New Holland offer rotary control knobs and monitors.

In this size of tractor the driver has a fair climb to get to the seat. The height of the operator’s platform varies from 1.57m (JD) to 1.72m (Case IH, New Holland).

Cab space is very good across the board with an average 2.6sq m at shoulder height. Visibility from all seven was good.

All had the same issue with forward views, though. Emissions rules mean massive rads, filters and cats have to be tucked under the bonnets. Nearly all are wasp-waisted in front of the cab, with the broadest section up front over the axle leaving more room for wheel lock forwards and behind.

The Case and New Holland are comfortably quiet. Under full load noise level here was only around 70.5dBA at the driver’s ear. Fendt came in at 77dBA and MF and Valtra 79 dBA – although no tractor stands out as exceptionally noisy.

All could be operated without a handbook and John Deere, Fendt, Case IH and New Holland have especially clear instrumentation and controls.

As regards in-cab computers, the poorest was Valtra’s small display, relatively complex menu structure and arrow button navigation. JD’s touchscreen is excellent and, because it is optional, all the functions are replicated by buttons for the more traditionally minded.

The larger touchscreen on the Fendt also has a very logical operating structure. The colour screen monitors from Case IH, MF and New Holland really act as displays and can’t be used to alter all the main tractor functions, sticking mainly with hydraulics.

Important settings on the Case and New Holland can be carried out without the monitor.

Those drivers who don’t feel the need to meddle with every last detail will manage fine without a terminal.

All test tractors had suspended front axles. New Holland has even given up its tight-turning SuperSteer axle in favour of this. Only Deere opted out of cab suspension, although it was the JD’s tractors that fared best on the road in terms of comfort, alongside Fendt and followed by MF and Valtra.

The turning circles of all the candidates are astonishingly compact – between 12.8m (MF, Valtra) and 14.1m (Deere).

We have worked with the DLG test centre for more than 20 years using a selection of parameters from the OECD international standard test. We have recently added measurements for AdBlue consumption and exhaust emissions. 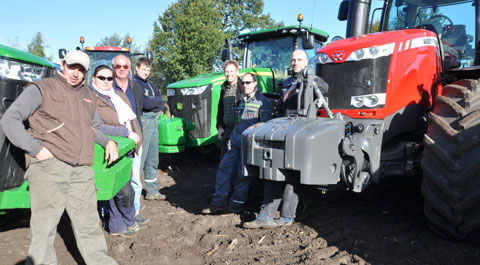 In comparison the AdBlue-free JD 8360R used 14g/kWh more diesel (243g/kWh). At half power, that makes the American tractor’s running costs 2% higher than the German’s (although it doesn’t take account of the expense of AdBlue storage, transport, and so on).

At 21g/kWh, the Sisu engine in the MF and Valtra proved the thriftiest on AdBlue and, at the same time, achieved some of the best results for fuel usage at max. power – 224g/kWh.

All three powershift tractors were around the same performance in this respect and because the CNH tractors consumed 22g/kWh and 23g/kWh AdBlue, the Deere 8335R proved more economical under partial load testing with 237g/kWh.

The DLG compared the brochure fuel consumption claims for tractors with its exact test-lab measurements. Average deviation was only 0.78%. The smallest difference found by the DLG was for the New Holland – which claimed a figure that on average was 0.5 % too low – and the Deere 8360R (-0.51%). With MF and Valtra the claims were too high by an average of 3.74 %.