If you’ve ever worried about overloading your muckspreader then you can rest easy thanks to bit of useful consumer research carried out by BBC’s Top Gear.

In the third episode of the current series, presenter Matt LeBlanc and his sidekick, actress Tamsin Greig, test a British-built Bunning muckspreader by filling it with a series of bizarre items, including a 2004 Volvo S60.

The spreader in question – a tri-axle Lowlander Widebody 380HD – appears to make mincemeat of the Swedish saloon, but surely there was some behind-the-scenes trickery to make the stunt possible.

To find out, we quizzed Bunning’s managing director Greg Shepherd. 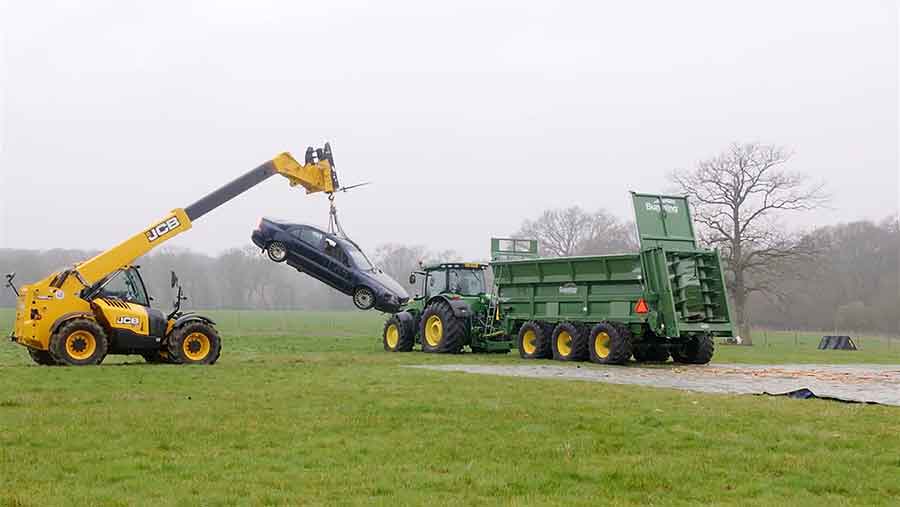 How did you get involved in the stunt?

Top Gear’s assistant producer approached us in early March and asked if we’d be interested in taking part.

To start with we thought it was a wind-up, but we soon realised it was a genuine request and it took all of about two seconds for us to say yes. 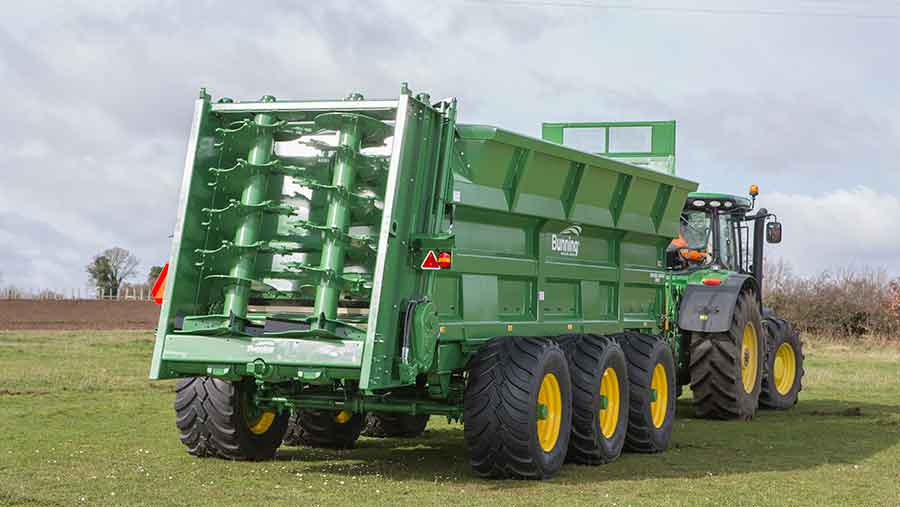 As luck would have it we’d just finished prepping one of our 380HD machines to be shipped to the USA, which was perfect for the job.

Its 1.83m body was just wide enough to fit the car in and we were confident it was more than strong enough.

Filming took place on 12 March, which was a week before the programme aired.

Was the spreader modified?

The spreader was completely standard, but it did have a cam clutch fitted to protect the auger gearbox, rather than a shearbolt. However, this is on the options list and most of our larger spreaders go out with one. 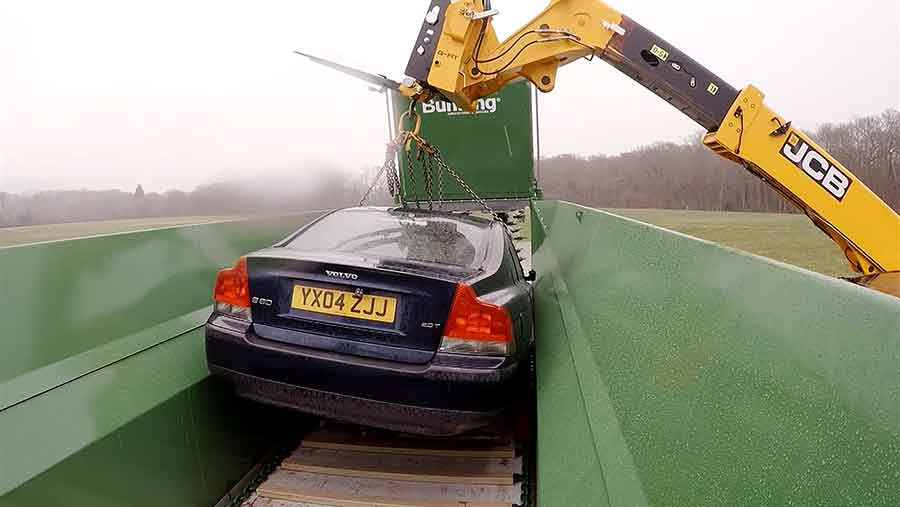 No modifications were made to the bed chains or the rear beaters either. In the USA, where we sell most of these machines, they have to cope with spreading rock-solid muck and compost at temperatures as low as -30C.

They also have to deal with lumps of concrete and stone that sneak in when the spreaders are being loaded by big 360s.

For that reason, we make our auger flights and auger cutter points out of heat-treated boron, which is particularly strong and hard wearing. 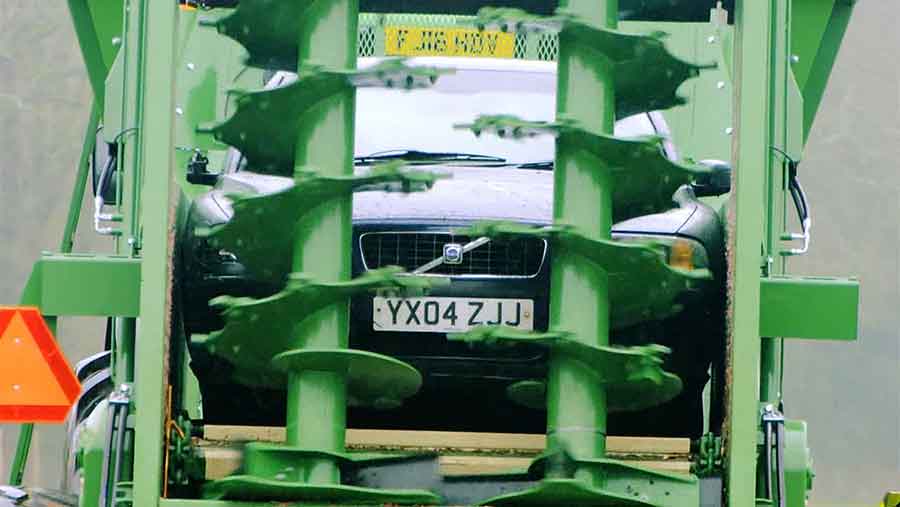 How much of the car was removed?

The engine and gearbox were the main items that were removed, as there’s no way a solid lump like that could fit through the augers.

To start with we were concerned that the augers would drag the whole car in and block up, so we considered tying it to the bed chains.

However, when Top Gear brought us a car to test the week before we found it was heavy enough to stay in place and the spreader just chewed it apart a piece at a time.

The fact they turned up with one of the toughest cars on the road made our hearts sink a little, but the spreader coped with it just fine.

Did it really spread the car in one go?

The car went though in one pass and everything that appeared to come out of the back in the film was genuine.

It did cause the cam clutch to spring a couple of times, such as when the bulkhead went through, but we just reversed the bed chains and had another go.

How much power did it need?

For the Top Gear stunt the spreader was hooked to a 405hp John Deere 8370R, which had plenty of power. However, these spreaders frequently have as much as 600hp on the front.

The only damage was a few scratches on the inside of the body and some wear on the beater tips.

We’re going to touch up the paintwork, replace the tips and then send it off to the USA, where we’ll probably run it as a demonstrator. As a precaution, we’ll replace the auger gearbox, but there’s nothing wrong with it. 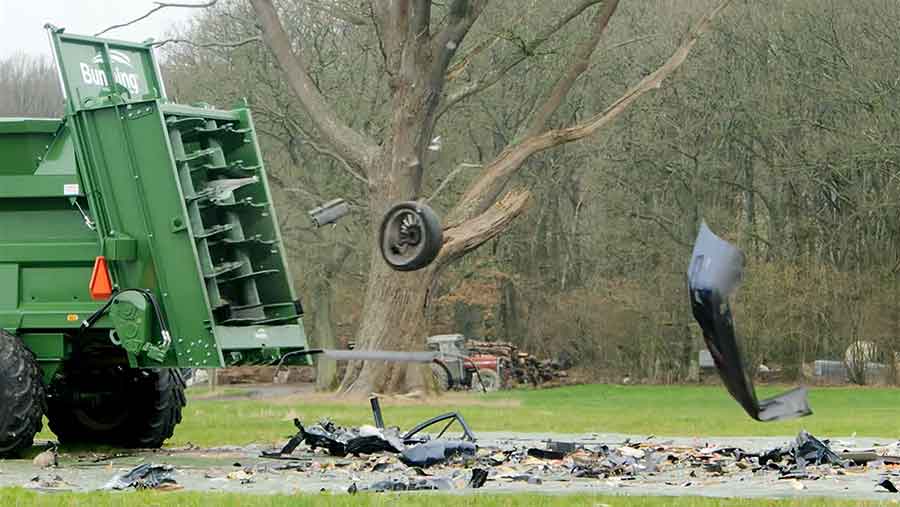 Bunning’s biggest market for the 380HD is the USA and Canada, and it has recently joined in a joint venture with Norwood Sales in Fargo, North Dakota, to manufacture Bunning spreaders for the North America market.

The Norfolk-based firm also has several machines operating in South Africa and Australia as well as one in Afghanistan.