Sourcing a decent second-hand telehandler for under £15,000 is something of a challenge. But if you’re not too concerned about looks then there are bargains to be had. Nick Fone picks up a few tips and tricks from the experts

In the case of any second hand machine, first appearances are often a good indicator of overall condition.

However don’t write off something that looks shabby but might well be a mechanically sound bargain.

At this end of the price spectrum you can’t expect showroom condition and if it looks too sparkly and new, look out for what’s been covered up.

However be aware that this could be a disguise for something more grave – pay attention to these areas in particular.

The Italian firm’s trademark ‘ring-of-steel’ – a solid tubular bar the runs all the way around the extremities of the machine – is a real strong point in preventing damage from the inevitable shunts these type of machines suffer.

Pivot-steers like Manitou’s MLA always seem to get a good battering to the back end which is generally pretty well absorbed by the chunky counterweight.

However anything a little pointy or angular above waist height seems to have an uncanny ability to cause untold damage to the various vulnerable radiators perched in the tail.

Even if they’re not leaking, folded fins will limit cooling and could cause problems. 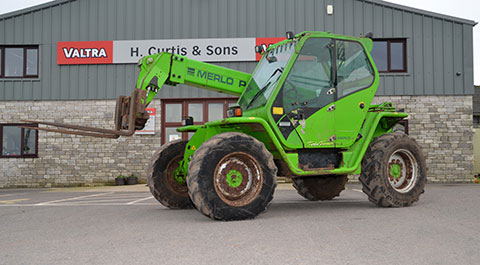 It’s standard stuff in the engine department – check for leaks and evidence that the filters have been changed recently.

With Perkins motors you generally know what you’re getting. They’re pretty reliable but don’t be surprised by a fair whiff of smoke from the breather and a semi-permanent haze around the exhaust. As long as oil levels are kept topped up, it’s rarely an issue to worry about.

As with any engine, cooling is something to keep an eye on. With hydraulic, transmission, engine, air-conditioning and intercooler radiators so closely crammed in there’s an inevitable issue with heat build-up on all these machines.

If there’s a problem in one circuit this can quickly help to cook the others. 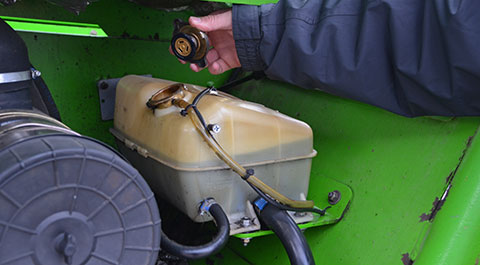 Check the Merlo’s transmission oil for milkyness that would suggest water contamination. The reservoir looks deceptively like a coolant expansion tank.

Confusingly for years Merlo fitted an off-the-shelf radiator expansion tank up front in the engine bay as its transmission oil filler.

Unsurprisingly that frequently causes confusion and water gets added to the hydrostatic circuits which, if not caught quickly enough, can prove fatal.

If the transmission is sluggish and there’s any evidence of milkiness in the oil, then there could be trouble brewing

In the absence of water, Merlo’s hydrostatic set-up rarely causes problems but things can start to wear on machines of this vintage.

Get the machine properly hot on a good road run and then try climbing a steep hill. If it feels excessively sluggish the pump of motors may be beginning to show their age.

Similarly position the attachment carriage against an immovable object and in top range give it a push. If the wheels stall rather than scrabble that’s another sign that things are beginning to get tired.

On torque converter transmissions like those used in the JCB and Manitou, road-testing is the only real way to check on gearbox health. Get the machine hot and run up and down the powershift steps in both forwards and reverse.

Each shift should be smooth and if there aren’t the expected number of gears then it could spell trouble. Sometimes however it’s just a sensor or dodgy wiring that needs attention from someone who knows what they’re looking at.

Once you’ve given the transmission a thorough warm up set the machine in gear and drive against the brake.

It should be easier to hold to a standstill in higher gears but if you can’t overcome the brakes with plenty of right boot in first or second then it’s likely the clutch packs are slipping and will need replacing – that’s a job that will stretch well into the thousands.

If all else fails, get a whiff of the transmission oil. If it has a burnt smell to it then it’s likely there are expensive torque converter issues and it’s time to walk away.

On the Manitou, the shaft that runs from the engine to the gearbox has rubber doughnuts either end, which can break up over time and their retaining bolts can snap.

The one at the transmission end is easy enough to change but at the engine end there’s no easy access either from under the machine or through the cab floor.

Brakes can be tricky to assess in a quick once-over. Just because they’re weak or spongy, it doesn’t necessarily mean a problem – they may just need bleeding or flushing through.

However if you do suspect an issue then on machines with oil-immersed brakes enclosed in the axles, it’s worth cracking open the drain plug to get a sample of oil. If it’s at all sludgy then they’re probably going to need replacing.

If the oil level is high then the cylinder seals may well be leaking into the axle and will need a refurb kit.

Due to the nature of the transmission braking that that Merlo’s hydrostatic set-up generates, brake usage tends not to be too heavy.

But that too can create a problem – years of redundancy mean that can be seized and getting them freed it is a trickier job than might be imagined.

Depending on spec, dry discs are used on the front axle and it’s possible (with a bit of Houdini-esque contortion) to get a measure of pad wear.

On rigid-chassis four-wheel-steer loaders like the JCB and Merlo steering is a simple but essential thing to get right.

Switch between steering modes and check that the wheels self-align as they should.

More often than not if there’s an issue it’s down to chafed wiring or a faulty proximity sensor on the axle.

It gets a bit more complicated once they’re eliminated as it’s likely to be something to do with the solenoids on the steering valve – a dealer job. 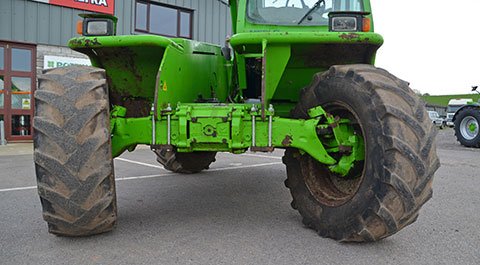 On rigid four-wheel-steer machines, check the wheels self-align when switching between steering modes.

Like any machine, check for play in the track-rod ends which are easily and cheaply replaced.

Similarly bend-in-the-middle machines like the Manitou MLA can suffer slop in the steering ram pins and bushes but it’s the main pivot point that needs most attention.

Get someone up in the cab to power the boom down onto the ground and work the hydraulics to rock between the forks and rear axle – any play should be obvious.

While here check for slop in the prop-shaft UJs and also the main carrier bearing which is difficult to grease. Drive round on full-lock listening out for a rattle – that’s the telltale it’ll need changing.

Axle king pins are a frequent let-down for hard-working handlers.

Lift the front wheels in the air with the boom and give them a good shake-down – any wear will be immediately apparent.

It’s the same principle for attachment carriage pins and bushes which often suffer a lack of attention from the grease-gun. 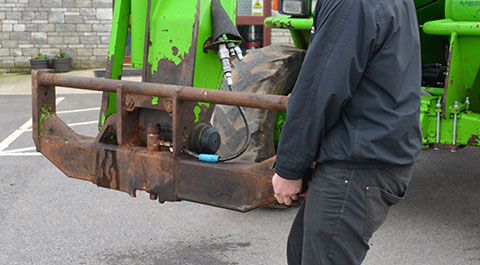 Get hold of the attachment carriage and give it some stick to check for wear in the pins and bushes.

Replacement parts are rarely too pricey individually but the bill will soon start to mount up if there’s plenty to do.

If however things have been allowed to go too far and holes end up elongated, factor some whopping welder’s invoices into the price you’re prepared to pay.

Bigger pivot pins will generally be kept in place with retaining caps and bolts.

These regularly find ways of disappearing and if unreplaced the pins can start to rotate, placing them under stress which eventually results in them shearing.

Tucked behind the cab, Merlo’s compensator ram is a blighter for this. Check for squeaks in the area that suggest it’s running dry.

Replacing it is a pig of a job that will take a well-trained fitter a good three hours to do.

Where boom hoses are routed up the centre of the telescopic section, they’re often kinked back on themselves in a very tight loop.

Over time they begin to fatigue and eventually leak. Don’t be alarmed by fairly significant oil losses from this area but bear in mind that it’s a boom-off job to sort.

JCB joystick buttons tend to give out after several thousand hours of thumb action. Replacements are cheap and worthwhile to keep dust out of sensitive switchgear.

In a similar vein, don’t be worried by slop caused by worn wear-pads on the boom – most are adjustable and if not can usually be replaced fairly easily.

On all these loaders the bucket crowd ram is susceptible to damage when loading over the side of spreaders, feeder wagons, etc… If leaks are evident check for pitting, scuffs, etc… on the piston that could be damaging the seals.

Powering the boom down on the deck, check the Manitou’s main pivot for play. 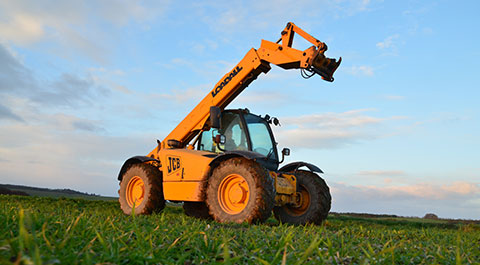 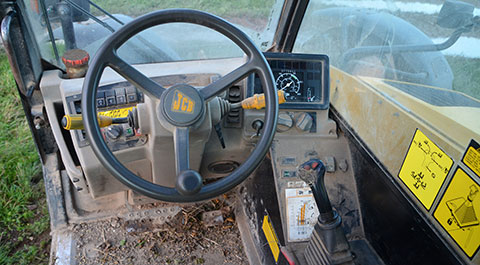 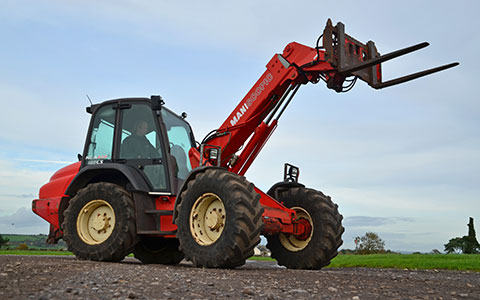 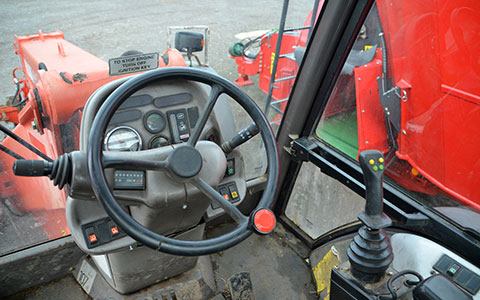 Deduct up to £2500 for 80hp non-turbo models as these were generally lower spec all round.

Thanks to Dan Hurford at H Curtis and Sons and Mark Wildman at Watling JCB for their advice.