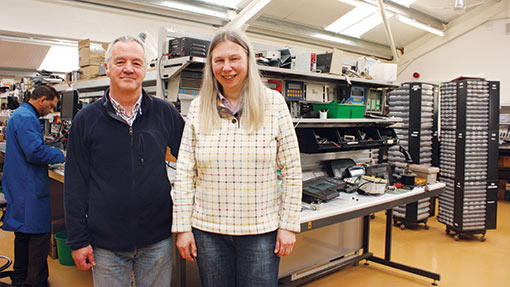 Here’s a typical harvest-time scenario. You get the mobile dryer ready for the first batch of damp corn of the season to go through. Everything else is ready; you just need to switch on the unit to get the thing going. You press the button, wait for the display to light up…and nothing happens.

Or it could be the essential speed-area meter in the tractor that tells you your forward speed and hectares covered. Time is short; you want to get on… but however many times you press the button, the display stays as dim and dark as a February morning in Helsinki.

The huge proliferation of displays on almost all types of farm machinery has brought a mass of information that was wholly unavailable to previous generations of farmers. But when they go wrong, we’re in something of a pickle.

Traditional remedies, like switching on and off repeatedly, can do the trick, but as the equipment gets more sophisticated they’re less likely to work. Your machinery dealer may know what to do but he’s unlikely to be an expert on electronics. So who do you call?

The answer for many people is Warwickshire couple David and Dawn King, who have built up a busy ag electronics repair business over the last 22 years. Before starting the company, David worked for Massey Ferguson for 11 years, first as a product specialist, then writing tractor manuals. In fact his very first manual was for the MF3000 tractors with electronic draft controls in the mid-1980s.

Mr King started the repair business in 1991, an era when old-fashioned circular needle gauges were giving way to LED/lcd displays and traditional buttons were being replaced by mini-buttons hidden under a plastic film. 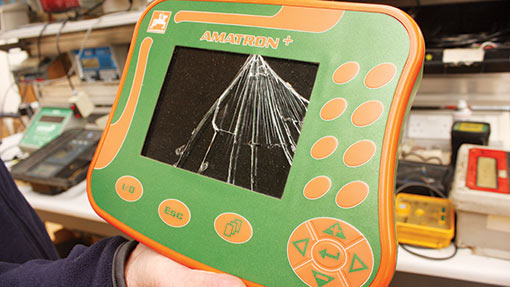 While 75% of repairs are to machines on British farms, 20% are to ones in the Irish Republic and 5% to machines being used elsewhere in the world. The faulty baler control box that arrived from Uruguay a couple of years ago was at the exotic end of the scale, but not totally unusual.

“We don’t usually see equipment here until it’s three to five years old or out of warranty,” says Mr King. “It soon ramps up, though, and we get a lot of equipment that is 15 years old and on its second or third user. We were even once asked to sort out a veterinary laser designed to heal horse ligaments.”

While he doesn’t encourage farmers to jump in the car and bring their malfunctioning machines to his premises, for some it’s the only way out of a potential crisis. “We had one couple from southern Ireland who were desperate to get their drill box fixed,” he recalls. “They drove to Rosslare, got the ferry to Fishguard, drove to our premises and then slept in the car while we fixed the unit. Then they drove straight back again at 4.30pm.”

“Another farmer, this time from Aberdeen, drove down to Stratford overnight and arrived at 5am. He then slept while we fixed his grain drier display box and headed straight back in the afternoon. People can understandably get very stressed when it’s a key machine.”

The classic and vintage tractor sector is a reliable market for him, too. It’s not about old-style needle temperature gauges for TW20s, though, because those can be easily procured through the back pages of. Instead it’s about those early digital lcd displays from 1985 onwards.

“We get sent three to four dashboards for 10 Series Fords for repair every month,” he says. “It’s usually impact damage on an lcd screen or display faults or often just bad solder joints.” Classic Tractor

Sourcing new components is one of the most time-consuming parts of the job. “We have to source right across the world – there are hundreds of suppliers out there,” he says.

“Electronic components like resistors, capacitors and semi-conductors usually have a manufacturing life of about seven years. After that you have to find another source, usually in Taiwan or China, but manufacturers are usually only interested in big orders.”

So what are the main things that he fixes?

Over winter the biggest task is repairing the weigh cells and displays on diet feeders – in fact one-and-a-half staff members do nothing else.

“Often it’s tree branches hitting the display, or else catching it on the tractor fender or the side of a building,” he says. “Sometimes it’s just because it’s been left out overnight or someone has been over-zealous with the pressure-washer. Out of every 1,000 weighers, we reckon 300-400 have water in the control boxes.”

Tractor cabs are hostile places for sensitive electronics, he points out. Sunlight makes the thin plastic coating on screens go brittle and constant vibration takes its toll on components.

Sometimes, it can be unexpected items that cause trouble. “We had a New Holland tractor in one day where red wine had got into the dashboard. We weren’t sure how that had happened…”

Another common reason for a tractor control box or screen arriving at David King’s premises is because the bracket or sucker has fallen off the windscreen. Add that to high cab temperatures in summer, plus the change to non-lead solder in 2000 (which made the solder joints on circuit boards liable to cracking) and you can see why David King’s postman is probably in danger of having a hernia.

“Some drivers are good and very caring about their machinery,” points out Mr King. “I think they’re gradually improving.”

Seed drill controllers are complex bits of kit and quite a few of them make the journey to David King for repair. One of the main problems is that some machinery manufacturers use components that are not farm-friendly.

“I see connectors that are designed for home computers – the pins are too small. They’re just not up to the job. There should also be more commonality between components.”

Control boxes on fertiliser spreaders have a hard life, too, thanks to the corrosive nature of ammonium nitrate. And time-strapped drivers can often be part of the problem, too, says Mr King.

“It’s not unusual to find that the driver has left the control box in the fertiliser hopper all winter. Meanwhile, rain has got in over winter so next spring it’s no surprise that the box has stopped working.”

Sometimes, it’s the manufacturer who has underspecced components. This is particularly the case with undersize cable used to take the power to the opening and closing mechanism on the shutters on fertiliser spreaders, which can cause malfunctions.