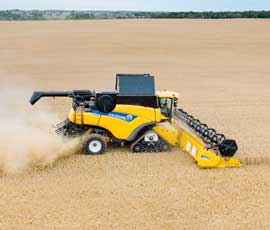 Peace of mind is a valuable commodity in farming, especially when it comes to the grain harvest. And the ability of tracked combines to get on to damp fields where tyres would struggle means this form of traction is an increasingly popular choice.

What’s caused the move to tracks?

Expanding acreages are putting heavy pressure on farmers to harvest vast quantities of grain at low moisture contents in ever-tightening weather windows. So having a combine that can run when others are still in the shed is an appealing prospect.

However there are other benefits for tracks, too, like the way they can cut soil compaction by as much as 65% and shrink overall transport widths to as little as 3.2m.

Cutting ground compaction caused by combines is an important benefit. Many combines now weigh more than 30t once the tank full, with two thirds of that weight carried on the front axle.

“You may start with a 19t combine,” says New Holland combine specialist Nigel Honeyman, “but a wide header can add 3.5 to 4t and a full 12,000 litre grain tank is another 9t. That’s fine in dry years, but in wet years can be a worry”.

Which manufacturers are offering track options on their combines?

The first company to produce in-house fully integrated rubber tracks was Claas, which started selling its Terra-tracs in the UK – its largest market – in 1998.

Other countries have caught on to the benefits over the years, too.

“In 2010 there were 400 Terra-trac units sold – of which half were destined for the UK”, says Claas combine specialist Tom Pine. “In comparison, 1000 units were sold in 2011 because of wet harvests in France and Germany.”

Germany is the other big European market for tracks. Interest in tracks is growing there partly because of compaction but also because of tight road rules that limit machines to a 3.5m transport width, says Mr Pine.

Last year saw John Deere and New Holland announce that they were to produce tracks in-house instead of fitting units from one of the many specialist track makers around the world.

Deere’s tracked system is now an option on the S-series combine range, while New Holland offers them on CR8080 machines and above.

Next year will see Deutz-Fahr offering Italian-made Tidue tracks as an option on its combine range.

How do they manage steep banks and hills?

While tracks have definite advantages on flat land, their merits on steeper terrain are less clear-cut.

John Deere says its Hillmaster combine for farmers with hilly land will remain a wheeled machine, as tyres are more effective than tracks at cutting into sloping ground. Also, the Hillmaster’s chassis is not able to accommodate a track system.

There is a variety of belt sizes on the market for wet or late harvest conditions, and the makers claim that the area of rubber in contact with the ground can be boosted by as much as 40%.

How much is compaction reduced by?

Research led by Professor Richard Godwin at Harper Adams University College in 2007 showed that a wheeled 11t Dominator caused similar compaction damage to a 32t Lexion on tracks, and far less than a 28t wheeled combine.

Savings can really be seen post-harvest, particularly with subsoiling costs, according to Prof Godwin.

“After tracks, subsoiling requires around 88hp at a cost of £2/ha, in comparison to after tyres which may need as much as 240hp costing £6/ha”, he says.

The track and axle components weigh about a tonne more than a tyre-based equivalent, a pretty small figure given the overall weight of the machine and added benefits of tracks.

Is traction better with tracks?

A track gives double the amount of pull of a tyre, says Prof Godwin, although it’s less effective on very greasy surfaces because it has a lower penetrative force in comparison to a tyre.

Scuffing when turning at headlands has also been a concern, but it’s only significant in moist conditions when it may smear. That said, large header widths give combines a far greater space to turn in, so it’s not a major problem anyway.

How many combines are being sold with tracks?

Deutz has not yet sold any track-equipped combines yet, having only shown the first model at Agritechnica 2011 in November last year.

Are there retro-fit options?

Retro-fitting tracks is an option for those with tyred combines wishing to switch from tyres. Canadian maker Soucy (imported by Collings Bros.) claims its combine track system offers the same footprint as seven tyres each side of the machine.

Other firms producing tracks suitable for combines including Dutch maker Westtrack, ATI in North America and Tidue, as well as Grecav’s Bruko tracks which were on John Deere’s options list until a couple of years ago.

Are they easy to fit?

The tracks can be mounted on farm in a couple of hours, as they are mounted directly on to the final drive flanges of the combine without the need for additional support.

Retro-fitting does have its disadvantages, primarily when it comes to transport speed. Because the transmission and gearing doesn’t change, machines are likely to be capable of little more than 20kph.

Is there a standard track width?

Track width choice is widening quickly. Last year saw Claas announce two further track width options in partnership with Canadian manufacturer Camoplast. Though the widest two tracks are not marketed in the UK, options now range from the standard 635mm belt up to 890mm available on the Lexion 770 model.

John Deere’s standard track is 660mm wide but two track width options are available for New Holland machines – a narrow 610mm option where width is an issue, and a 760mm option for those worried about compaction.

Do wider tracks use the same components?

Idler components are wider for wider tracks. That’s good because the peak weight carried by each idler is lower and weight is spread more evenly.

What’s the difference in the various designs?

The benefits of the various track shapes are hotly debated by their makers. The triangular design with a high drive sprocket on CNH and Deere combines is claimed to perform better in wet and boggy conditions.

On the other hand, Claas reckons its flat-track design has a larger contact area and large idlers, which keeps contact on the track and spreads the weight more evenly.

The drive wheel and other components are spring mounted separately in the running gear to smooth the ride to minimize pressure on the chassis and engine as well as improving the cornering ability of the machine.

How about travelling on the road?

Claas claims road speeds of up to 40kph are possible on the Lexion 750, with 30kph coming as standard. Track widths range from 3.3m for the 750 rotary to 3.5m on 770 rotary and 670 walker machines, considerably less than the 3.8m width of a large tyre-based machine.

New Holland’s CR9090 has a total width of 3.48m, and a CR8080 goes down to a just 3.2m for the width-conscious, while the wider track option (760mm) see combine widths touch 3.8m. The SmartTrax system offers farmers with road speeds of 30kph at 1,600rpm – rather than the 23kph available on Tidue’s tracks – and improved manoeuvrability. The 30kph NH speed is possible at 1,600rpm.

Having inherited Tidue’s tracks, Deutz combines are capable of 20kph. Total width is just under 3.5m, rather than the 3.65m of the machine running on 800 tyres.

Are there added servicing and maintenance problems with rubber tracks?

No. It may even be that you can get more years use out of tracks than tyres, as weak tyre sidewalls give after long periods parked up, says Mr Pine.

With the average combine clocking up around 300 hours a year, lug wear is minimal compared to tractor tracks which are exposed to varying draft pressures rather than just carrying load.

Deere claim that its belts are able to run at a lower tension because of idler configuration, which may mean the tracks are longer lasting.

Retail prices can be anything from £25,000 for New Holland’s SmartTrax to £50,600 for Tidue tracks on Deutz combines.

Some of the cost can also be recouped when it comes to resale, with tracked machines able to command a premium of up to £10,000 on the second-hand market, according to Mr Honeyman.

Is there still a place for tyres?

Yes, of course. Tyre technology has advanced too, with Michelin in particular leading the way with its CerexBib using its less rigid Ultraflex structure to manage the clever trick of reducing both tyre width and levels of compaction.

The CerexBib is 15% narrower than the conventional combine tyre, has the same load index and diameter and is comfortable on the road.

Also on the market is Goodyear’s Optitrac H+, which claims to provide an increase in footprint area to improve traction and reduced ground pressure. And, of course they’re a lot cheaper than a track system. 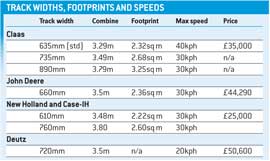 Risk of scuffing and smearing