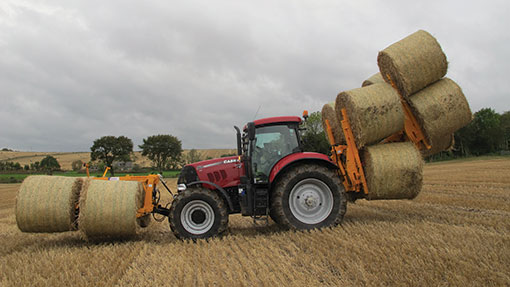 Hauling bales by trailer is all well and good, but when labour is scarce and hauls relatively short it can be quicker and easier to simply spike and carry them from field to store.A certain satisfaction comes from turning into the yard with a sizeable flatbed trailer laden with several tonnes of big square or round bales. But is it always the most efficient and cost-effective way to clear grass or straw from fields?

“By the time you’ve gathered up bales with a loader, stacked them on a trailer and then reversed that procedure at the yard, you can bring in a lot of bales with just a tractor,” says Peter Murray of Murray Machinery. “It’s also a one-man, one-tractor system, while trailer hauling often involves at least a tractor and a loader, and two men to drive them.”

Mr Murray has produced front- and rear-linkage-mounted bale carriers to transport two or four round bales, but that was insufficient for Roger Glennie, an Aberdeenshire sheep and arable farmer at Hillhead of Ardo, Methlick.

“Mr Glennie came to us with ideas for a larger outfit capable of carrying eight round bales on the back and four on the front, which was within the capabilities of his big tractor,” Peter Murray recalls. “It would also have the flexibility to handle round or square bales – up to a dozen round bales in one go or a similar amount of straw in six big square bales.”

Despite the numerous bale weights and dimensions involved, he says the first Octa-Quad, as the finished outfit is named, turned out pretty much right first time. Folding, rather than rigid, tine frames doubled the bale capacity front and rear.

That said, restricted forwards visibility between two upright big bales or round bales one above the other prompted a re-think for the front unit.

“It now carries two square bales, one in front of the other, or four round bales in pairs carried in the same way,” Mr Murray explains. “It means there’s a longer front overhang, but that can be reduced for pulling on to a road by lifting the forward-most bales up and over; the driver can still see beneath to pull out safely.”

Although the Octa-Quad can be bought in basic form with fixed tines and manual safety covers, and spike frames that fold in pairs, the five systems that have gone out so far have all had the optional fold-in tines. These tines at £2,000, plus an electric solenoid valve block at £2,750, take the total price to £14,750.

“The valve block means only one hydraulic service is used on the tractor, and each spike frame operates individually, so you can pick up round bales singly rather than having to put them in pairs beforehand,” Mr Murray explains. “You also get a neat joystick in the tractor cab to operate the system, and the fold-in tines are an important safety feature.”

While 4ft- to 5ft-diameter round bales are the most commonplace, some growers are moving towards 6ft 6in to 7ft bales to reduce the number made, hauled and stored.

“The Octa-Quad will handle these bigger bales, although you can carry only half a dozen of the biggest round bales because they’ll weigh a little more than the largest square bales,” Mr Murray points out. “And it still means you’re carrying an awful lot of straw with a single tractor every journey.”