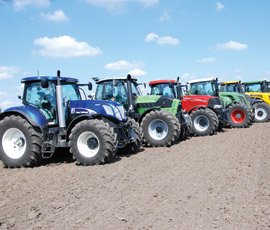 Tractor sales figures, traditionally viewed as a measure of farmers’ general confidence, seem to be finally rallying after several months of drops. In the six-month period from November 2012 to May 2013, every month apart from one saw a fall in sales of more than 20% compared to the same month a year earlier.

But the good news is that things may finally be looking up. September 2013 saw 1,242 tractors sold, some 17% more than the 1,058 retailed in the same month last year. The reasons are probably the obvious ones – it was a relatively drama-free harvest, yields were a bit better than feared and there’s a generally more cheerful feel about.