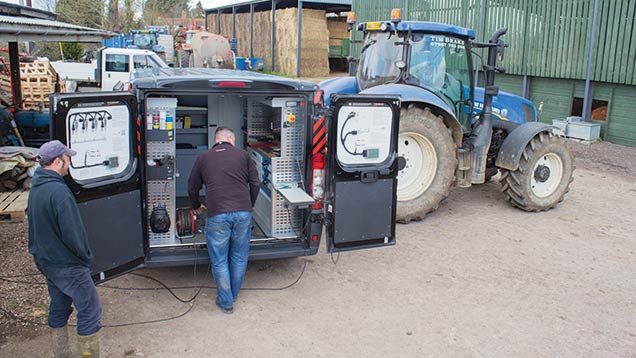 Fork out a few hundred quid on a little black tuning box and you could unleash a healthy dollop of extra power and torque from your tractor.

Sounds tempting, doesn’t it? But what are the risks? Will your dealer back you up if it all goes wrong and will it hike up your insurance premium?

To find out, we talked to the tuning companies, tractor manufacturers and dealers, as well as a leading insurer.

What do the tuning companies say?

Companies offering tractor tuning boxes are constantly popping out of the woodwork.

However, Steinbauer and Tunit are two of the more established names in the business. Here’s what they had to say:

How much more power do you get?

Our system is designed to get more usable power and torque from an engine, without putting it under too much pressure. We usually get a 25% boost.

What is tractor tuning?

In simple terms it is interfering with the engine’s electronic brain to make it develop more horsepower and torque.

There are plenty of different ways of doing it, but essentially they seek to do the same thing – get more fuel into the cylinders so that you get a bigger bang and a bit more oomph.

As well as getting the tractor to pull harder, that extra poke helps improve fuel economy as the tractor can go about its duties at lower engine revs.

How many different tuning methods are there?

Tuning boxes Plug-in tuning boxes are one of the most popular as people can buy them on the web, fit them themselves and remove them if they need to go back to the dealer. Most of these get more power by upping the pressure in the common rail, but some more sophisticated ones adjust the injection timing.

ECU remapping ECU remapping is the other, more invasive alternative than involves changing the programming of the tractor’s brain. This opens up more options, but can be traced by the tractor manufacturer and relies on someone knowing what they are doing. There are plenty of two-bit operators out there, so anyone going down this route should make sure they pick someone with a proven track record. A lot of these tuners will do things such as bypass EGR valves, bolt on uprated turbos and remove speed limiters.

Chipping ECU chipping is another technique, but it is less common these days. That is because most modern ECUs can be remapped by plugging in a laptop computer.

Does it reduce fuel use?

Because we are getting the tractor to develop more power and torque it can work at a lower engine rpm or go quicker in the field, reducing man and machine hours. We often get customers reporting fuel savings of about 20%, but it depends on the machine and the job in hand.

The power module plugs into the tractor’s ECU wiring loom and gets more power by lengthening the injection period. It does this according to the engine load, so as the engine gets worked harder it pulses the injectors for a longer period to increase power. It does not change any signals when idling or under light engine load. Nor does it increase commonrail fuel pressure.

Is it easy to fit?

We prefer to fit the system ourselves so that we can test the standard power, the increased power and fine-tune the settings according to the customer’s requirements. We do this using our own in-house designed dynamometers. But if someone wants to install a kit themselves, it should take less than an hour.

Does it work on all machines?

We have individual power modules for almost all tractors and power­ed farm machines and we get similar results with all of them.

Can it damage the tractor?

No. The Steinbauer only adjusts the duration the injectors stay open so it doesn’t put any extra pressure on the injection system or actively increase turboboost pressure. The additional power is also ramped off at low rpm to reduce the load on the gearbox and transmission. We don’t go mad and push the tractor beyond its limits – that is when you start getting problems.

How much more power do you get?

Power and torque usually go up by about 20% when one of our boxes is fitted. As well as the performance boost, it helps the engine run better at lower rpm and generally operate more smoothly. There is a dial on the box with settings from one to 10 – one being the lowest power increase and 10 the highest.

Does it reduce fuel use?

Because the tractor is developing more power and torque it can
carry out the same job at lower rpm and use less fuel.

The box gets more fuel into the engine by increasing the pressure in the commonrail injection system. Unlike some of the simpler boxes out there it can adjust the settings according to the load on the engine.

Is it easy to fit?

The box can be installed in a matter of minutes. All you do is plug it into the wiring loom that runs from the ECU to the commonrail.

Does it work on all machines?

We have boxes that are individually programmed for almost every machine on the market. We get average increases of about 20% across all brands.

Living with a tuning box

Somerset beef, sheep and arable farmer Tim Brake has Steinbauer tuning boxes fitted to two of his New Holland tractors and has had pleasing results with both.

His frontline 2013 T6.175 was fitted with the device just after the manufacturer’s warranty expired and has had a marked improvement on power and torque.

Before the box was fitted the tractor peaked at 140hp on the dyno and developed 1,115Nm torque at 800rpm. But after fitting the Steinbauer box these figures shot up to 174hp and 1,379Nm torque respectively.

“It picks up so much quicker and hangs on a lot longer with our heavy tanker in tow,” says Mr Brake.

It also seems to use the same amount of fuel and hasn’t had any problems since the box was fitted a couple of months ago.

Can it damage the tractor?

The box does not interfere with the engine ECU so all of the manufacturer’s safety settings are still in place. If someone does decide to crank up the power dial and work the tractor really hard it will go into “limp” mode before any damage is done.

What do the manufacturers say?

We talked to tractor specialists at John Deere, New Holland, Massey Ferguson and Claas, and unsurprisingly all took a decidedly dim view of tractor tuning. Here’s how they responded to our questions.

If someone fits a tuning device will it void their warranty?

Yes – all manufacturers take the same line. If they find any evidence that a tuning device has been fitted they will void the warranty, even if the problem looks like it is unrelated to the tuning product.

What if a dealer fits one?

Plenty of dealers are fitting tuning products to tractors and the manufacturers don’t like it. All manufacturers forbid dealers from fitting chips, but John Deere takes the hardest line, saying a dealer can be sacked if it is found to be fitting them. If the manufacturer finds out a tuning device has been fitted it is up to the dealer to sort it out with the customer.

Can you tell if a tractor has been chipped?

Will tuning devices damage the tractor?

Most manufacturers agreed that small increases in power probably wouldn’t do much damage. But larger increases could harm some components and cause the engine to overheat, resulting in problems such as EGR valve and head gasket failure. Upping pressure in the commonrail could also cause problems over time. They also said there are more engineering differences between models in a range than you might think. That means upping the power of the smallest model in the range to that of a larger one could stress some components.

What do the dealers say?

Farm machinery dealers have the unenviable job of acting as middleman between the profit-hungry manufacturer and budget-conscious farmer. That means pressure from one side to sell a pricier tractor and from the other to provide as much power as possible for the money.

OPINION: James Andrews
Is tuning worth the risk?

There is no doubt about it, tuning is a seriously cheap way of getting a more powerful tractor.

But it doesn’t come without its risks. On new machines there’s the threat of manufacturers withdrawing warranties, and if you try to crank the power up too high there’s a real chance that something could go bang. Play the game sensibly, though, and you are a lot less likely to have problems.

First, go to a reputable supplier. There are many firms touting cheap-and-cheerful boxes on the web that haven’t been tested and at best give patchy performance. When you are dealing with a tractor worth tens of thousands of pounds, a saving of a few hundred quid doesn’t seem worth the risk.

Staying sensible with the power boost is another must. Gains of up to 25% seem to be the norm, but some people are willing to more than treble that. We heard of one 180hp tractor that had been cranked up to 320hp – unsurprisingly it didn’t hold together for long.

So is it worth it? On a brand new tractor I’d probably give it a miss – the threat of manufacturers pulling the warranty is a serious one. But if you have your dealer’s backing it might be a different story.

For second-hand tractors it seems the risks are minimal, providing you use a quality system, the tractor is already in good mechanical order and you don’t push the power too far.

That is often a tricky place to be, but to help customers get a better deal or to improve an under-­performing tractor, some are willing to fit tuning devices.

Understandably, manufacturers are not very keen on this practise, so dealers willing to do it have to operate behind closed doors. To find out how common the practise is we spoke to a few dealers off the record.

We found it was a bit of a mixed bag, with some dealers happy to use them and others giving them a wide berth. To help get round the problem, some dealers will put the customer in direct contact with the tuning company.

“We often get approached by customers who want to get a bit more power from their tractor and we are willing to fit tuning devices to help them get that. We don’t often put them on brand new tractors, though. We’ve never had any serious problems.”

“It’s not something we’re willing to do here and we’re a firm believer that tractors are sent out with their factory power ratings for a reason. We had one customer with a chip on their combine and they had no end of problems with it. When we took it off it ran absolutely fine.”

What the insurer says

Unlike car modifications that can push premiums through the roof, NFU Mutual says fitting a tractor-tuning chip will not affect someone’s premium. However, it does recommend that people let them know it has been modified to avoid any potential problems when making a claim.