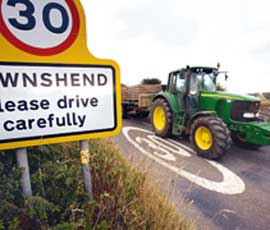 All rules and regulations tend to get a bit outdated at some point or other. However some of the road regulations affecting tractor drivers and their employers were probably drawn up in the days of Little Grey Fergies, reckons PC Bryant.

This is why some restrictions such as the 32kph (20mph) top speed for conventional tractors may seem unnecessarily severe by modern standards. But, reasonable or not, they are part of the law which Mark Bryant and his colleagues enforce.

PC Bryant is a rural beat officer based at Framlingham, and his special interest in farm tractors and equipment started when he was a schoolboy helping on the family farm. He went to an agricultural college and worked on local farms before joining the police force where he is a leading authority on agricultural matters while still helping on a local farm in his spare time.

The regulations relating to farm tractors and equipment on public roads are complicated, he says, and this can lead to both deliberate and accidental law breaking. Besides specific regulations covering farm equipment on the road, tractor drivers must also obey general traffic laws such as having the right driving licence and not being over the drink-driving limit – although PC Bryant has yet to encounter a tractor with a drunken driver at the wheel.

The consequences for being on the wrong side of the law can include a fine, penalty points on the driver’s licence or traffic accidents resulting in injury or death. Many of the problems are due to farmers and other drivers being genuinely unaware of the regulations, says PC Bryant.

Although arresting criminals is the high-profile side of police work, he says, preventing law-breaking on the road is also an important part of the job. So he welcomes opportunities to visit farm machinery clubs, farmers’ organisations and vintage tractor enthusiasts’ meetings to give advice that can raise awareness of the highway regulations.

“We want to prevent people getting into trouble unnecessarily,” he said. “Farm vehicles on the road are a problem area, which is partly because the regulations are complicated.

“I am always happy to talk to people and answer questions. I am sure other police forces have a similar policy and taking the trouble to check the facts is much safer than crossing your fingers and hoping you are not breaking the law.”

We asked PC Bryant to list some of the tractor and farm vehicle problems that are most likely to land farmers, contractors and tractor drivers on the wrong side of the law and bring complaints from the public.

The list for his patch in Suffolk would probably be similar in other mainly arable areas and shows where more effort is needed to avoid problems.

This is at the top of the list, partly because it occurs frequently and also because the consequences can be serious – including fatal accidents. Farmers are responsible for mud dropped on public roads by their own vehicles, but they may also share responsibility for accidents caused by mud from vehicles operated by a contractor they are employing for jobs such as beet harvesting, warns PC Bryant.

Although lights are not a legal requirement on trailers used only in daylight, this does not apply to direction indicator lights. These must be fitted and kept in working order on trailers built since 1990 and used on public roads.

Turning to the left (and especially to the right) without indicator lights can cause a serious accident which would be avoided by taking just a few minutes to fit and connect a light board.

3. Failing to pull over when causing a traffic tailback

For those in other vehicles it can be frustrating to be held up by a slow-moving tractor that ignores opportunities to pull over and allow the tailback to clear. It can also cause accidents if impatient drivers take risks to overtake, explains Mark Bryant.

Not just that, it is also bad publicity for the farming industry and it can result in a prosecution for driving without reasonable consideration for other vehicles.

Modern tractor transmissions make stopping and starting relatively easy, so his advice is – if at all possible – to pull in at a suitable opportunity and allow other vehicles to overtake.

The maximum gross train weight (GTW) – the total weight of the tractor, the trailer and its load – is 24,390kg. Exceeding the legal limit is all too easy and GTWs of 30t or more have been recorded by Suffolk police.

PC Bryant’s personal view is that he would like to see the limit raised because modern tractors and trailers could safely handle a bigger load. The existing limit encourages farmers to use a lightweight tractor, enabling them to pull a bigger trailer with a heavier load while staying within the weight limit, he says, but from a safety viewpoint that is not the best solution.

The regulations state that the police must be notified before farm equipment more than 3m wide travels on a public road. To ease problems for farmers and contractors, Suffolk police (and other police forces around the country) operates a special dispensation allowing one notification to cover an unlimited number of over-width vehicle movements during a specified period such as during harvest. Other police forces have similar schemes, he said, so there is no excuse for breaking the rules.

Most tractors on the market now have a 40kph or 50kph top speed, somewhat more than the 32kph (20mph) legal limit for most tractors on public roads. A small number of tractors such as the JCB Fastrac and Mercedes Unimog have the braking, suspension and other special requirements to qualify for the “fast” tractor classification with its 64kph (40mph) speed limit.

Fear of being stopped by the police shouldn’t be the only concern for those who routinely drive tractors and equipment on public roads, says Mark Bryant. Big increases in personal injury claims mean relatively minor incidents can result in massive financial penalties involving damages and costs.

Many farmers and contractors, says PC Bryant, do not realise how quickly the compensation culture is expanding and how expensive it can be.