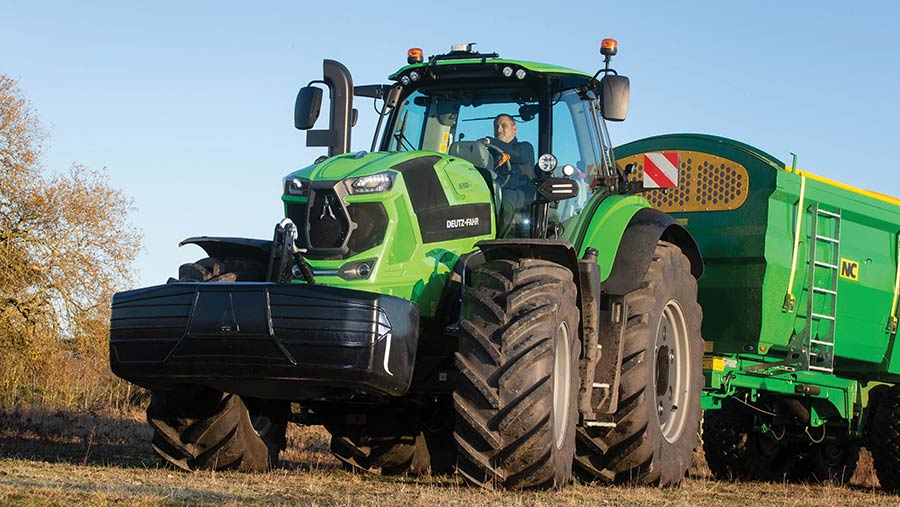 Deutz-Fahr has pinned its high-horsepower hopes on a new 8-series range that it reckons has the power, speed and hydraulic capacity to compete with the sector’s biggest sellers.

There’s currently just one model – the 287hp, 60kph 8280 – but the line-up will be bulked out in the next 12 months to neatly dovetail with the ranges that sandwich it.

However, any success depends on dislodging the likes of John Deere’s 6R and 7R models, Fendt’s 800s, and the T7 HD and Optum from Case-IH and New Holland.

If that wasn’t enough, Massey Ferguson has recently thrown its new 8S range into the mix, albeit currently without a CVT option. It’ll also have the Claas Axion 870 for company in the 250-300hp sector, which is estimated to be worth 450 units/year.

This, inevitably, brings the firm’s patchy distribution network into sharp focus. For too long the manufacturer has been a sleeping giant in the UK and its mere 1.5% market share is a poor reflection of the firm’s comprehensive tractor range that runs unbroken from 50hp to 336hp.

That puts it behind the likes of JCB, which offers far slimmer pickings in tractor terms. It’s also a long way short of the 8% target mooted at the launch of the 9-series in 2014 and the 9% share it enjoys in its home German market.

However, the current dealership shake-up across the UK offers a glimmer of hope and the company wasted no time in agreeing a deal with Collings Bros, which will give it good access to Cambridgeshire and Bedfordshire, where demand for the 8-series is expected to be fairly strong.

The company has also invested £80m in a new factory in Germany, which opened in 2017. This will allow production of the higher-horsepower models to be ramped up, starting with the 8280.

The 8-series takes plenty of bits from the existing 7-series, including the exterior styling, cab and, to an extent, the engine.

However, the stepless transmission – the only option for the 8-series – is completely new. It’s a major change for Deutz, not least because ZF, the firm’s TTV gearbox supplier for 20 years, doesn’t have anything that fits the bill. 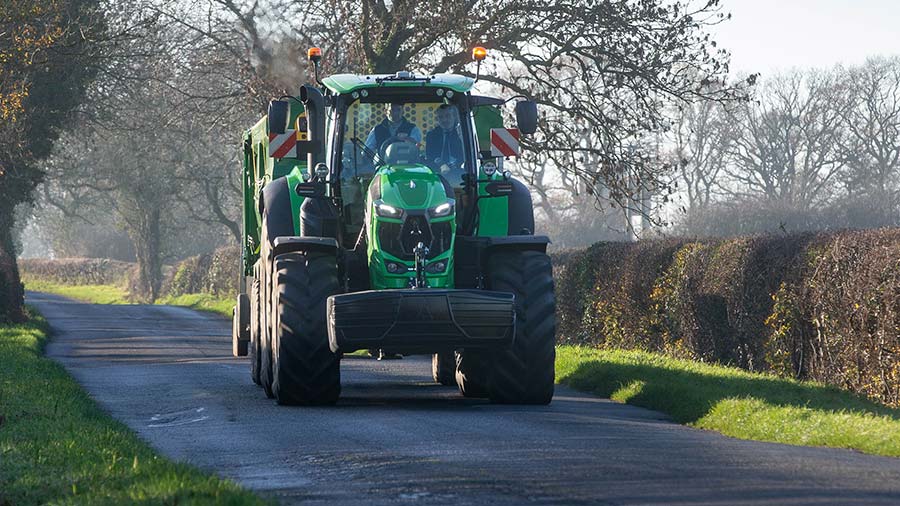 The four-range Smatic setup is still used in the 6- and 7-series but isn’t strong enough to handle the 8280’s near-290hp output, while the bigger Terramatic version used in the 9-series was deemed too heavy.

That has meant switching to a CVT unit built by Claas Industrietechnik (CIT), a subsidiary of Claas, at its plant in Paderborn. The powertrain is combined with SDF’s transaxle and assembled at the Deutz factory in Lauingen, Germany.

The way it works is very different to the comparatively crude four-range Smatic, where drive is predominantly mechanical and punctuated by the occasional involvement of a hydrostatic pump to smudge range changes. This makes it pretty efficient but slightly clunky.

Instead, the Claas version sees the hydrostatic element more heavily involved during early acceleration so, at slow speeds, it drives a bit like Fendt’s oil-hungry but super-smooth Vario.

However, in contrast to its Marktoberdorf-built rival, the two ranges in the CIT transmission shift automatically. This eliminates any risk of running with an unnecessarily high hydrostatic input in the field, should the driver forget to manually engage A-range.

Contribution from the mechanical part of the driveline increases with the rise in forward momentum and, by 7kph, the split is roughly 50/50.

The range change occurs between 8kph and 16kph, depending on the engine speed. Power transfer is entirely mechanical at this point and, for a split second, the pair of clutches that control the ranges are engaged at the same time, avoiding any break in power.

The second range works differently, in that the proportion of hydrostatic input never reaches more than 30%. This helps minimise power losses where small changes in speed are less crucial to performance and gets rid of the whine that can be heard in the cab at slower speeds.

There’s also the option of driving in manual mode, where shunting the joystick forward and back knocks it through virtual speed steps. It’s hard to think of a situation that would make this function useful, though. 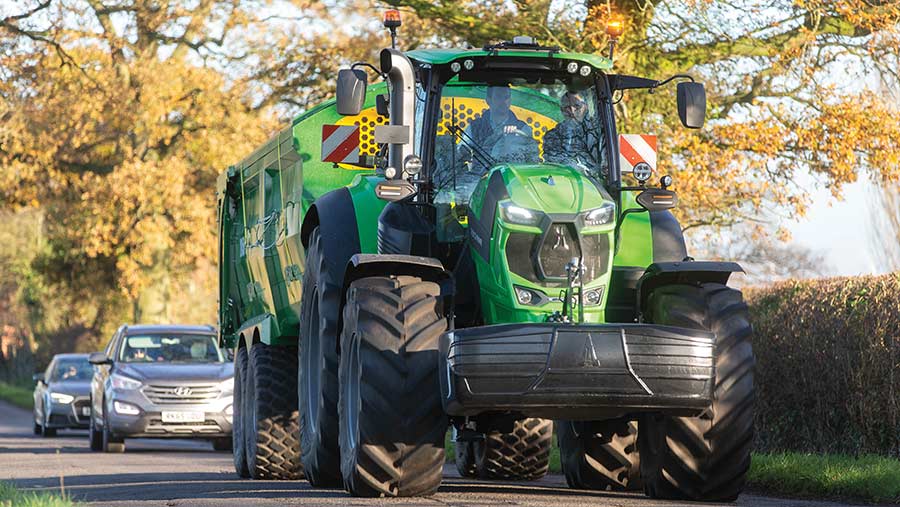 These tractors are designed with haulage in mind, so come with a 60kph top speed and the option of an engine brake. This automatically engages the electronically controlled viscous fan, putting more load on the engine to provide a bit more retardation.

An additional clutchpack in the gearbox holds the tractor stationary on a slope, called “power zero”, and there’s a handful of functions to improve towing performance, too.

These include a system that senses any mismatches between engine speed and transmission ratio, raising the pressure in the brake lines to 0.5bar so that it can respond quickly if the operator slams on the anchors.

Front-axle suspension is also automatically engaged above 30kph and includes an anti-dive function to avoid the tractor dropping its nose under hard braking. Here, the 630mm outboard front-axle disc brakes take up 60% of the work to reduce the load on the rear.

There’s also a stack of tyre options up to 900/60 R38s. Deutz expects Michelin’s Roadbibs to be a big seller for contractors spending more time on the road than in the field – the central rib and tight block pattern keep noise down, reduce vibrations in the cab and should last a bit longer on tarmac than a traditional tractor tread.

PTG’s tyre-pressure control system is available as well, and can be set up to run through the Isobus terminal on the in-cab monitor. 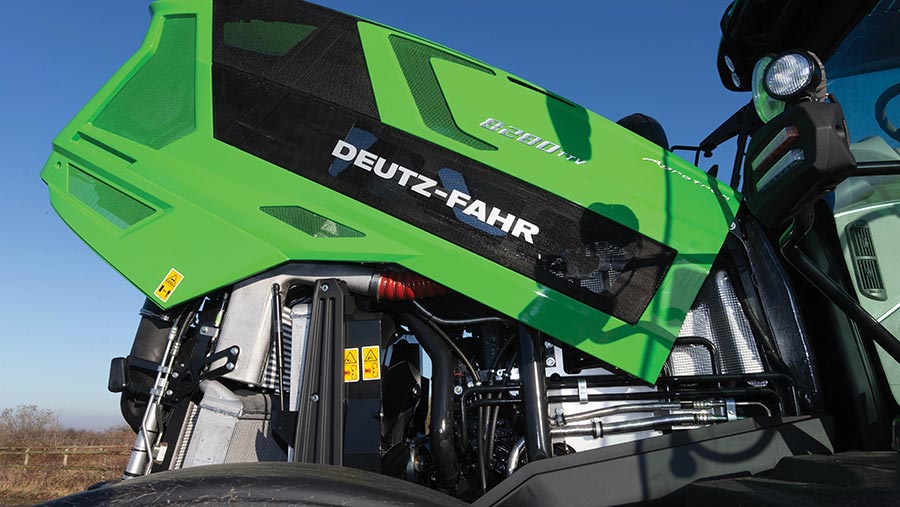 Deutz’s 6.1-litre engine is certainly time-proven – it’s been around for more than a decade and is used on models from 150hp to 250hp, albeit with tweaks to the timing and ECU. The same block can also be found on Fendt’s 800 range.

However, it’s had to undergo a few tweaks in order to produce the extra power without breaking emissions limits.

As well as switching to steel pistons that are better able to cope with the strain, the company has added a second turbocharger – just like it has done with the 7.8-litre engine on the bigger 9-series.

This crams more air into the cylinders, allowing it to run harder and hotter. The fact that the turbos are different sizes also means that the small one can spool up relatively quickly at low revs, while the larger one helps maintain the power at the top end.

In all, this should serve up sharper reactions through the rev range and, combined with the more sophisticated transmission, will make the droop system a bit slicker in adjusting to changes in ground conditions.

It also helps extend the delivery of maximum torque, which peaks at 1,226Nm and is largely sustained from 1,300rpm to 1,750rpm – much longer than the 7 series.

However, to manage the heat, the company has had to fit a second cooling circuit. While the standard cooling system is dedicated to managing the engine, the new addition deals with the extra turbo, as well as the hydraulic and transmission oils.

It’s run by an electronic water pump, rather than being driven by the fan, so output can be regulated according to oil temperature.

The tractor comes with the full package of emissions paraphernalia, including exhaust gas recirculation, SCR and a particulate filter. AdBlue consumption is estimated at a modest 2-3% of diesel use, which is roughly in line with that of the John Deere 7R.

This is mainly the result of the extra turbo and cooling package that allow the engine to run a bit hotter. By comparison, the 7-series delivers an AdBlue figure of nearer 10% and that is reflected in the size of the tank – 55 litres, versus the 8280’s 35 litres.

The engine improvements have also allowed Deutz to lengthen the engine oil interval to 1,000 hours.

Any changes in the cab? 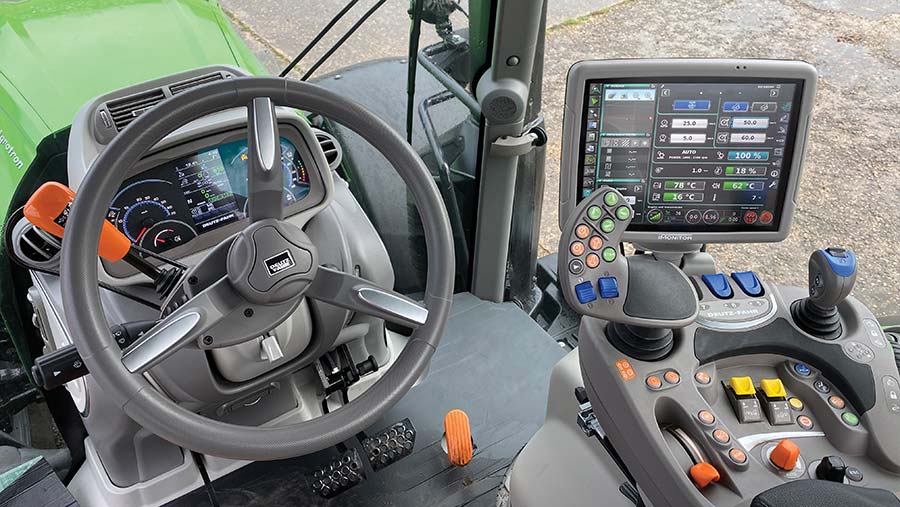 The Maxivision 2 cab is inherited from the 7-series and the frame has remained unchanged since its launch on the 6-series TTV in 2012.

It feels small on this tractor, particularly compared to the likes of John Deere but, sadly, Deutz’s new cab project wasn’t far enough advanced to coincide with the launch of the 8280.

Improvements extend to galvanised steps that won’t suffer from paint peel, a couple of extra air-conditioning vents and a quieter fan, and a pair of USB charge points. They’re relatively minor updates but will all benefit drivers.

Controls remain pretty tidily grouped on the armrest and settings can be dealt with on the 12in iMonitor 3 screen, which is sourced from Topcon. It can be used to run guidance, Isobus, display performance data and up to four camera feeds.

Variable rate with up to 200 section control – effectively single-nozzle – is standard, too, and maps and application rates can be sent to the tractor from the farm office. This same software allows dealers and owners to view the tractor stats – such as location, engine speed and fuel consumption – remotely through Deutz’s fleet management package.

Deutz was also the first tractor maker to get TIM (tractor implement management) accreditation. It means the system can also be unlocked on existing models, allowing the implement to control drive speed, hydraulic valves, linkage position and the pto. 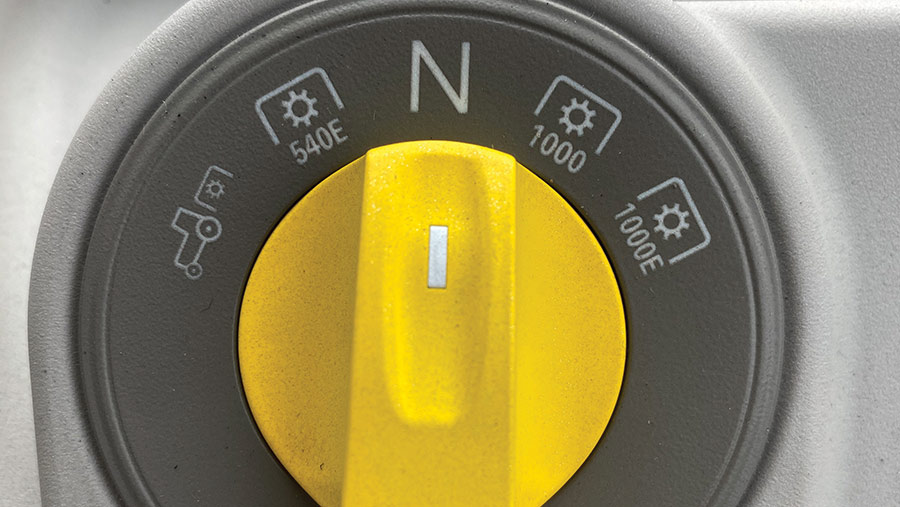 First impressions suggest there is little to dislike about the 8280, but the success of Deutz’s broad tractor range has long been hobbled by a shortage of big dealerships.

However, with manufacturers currently making major changes to their distribution agreements, the company has never had a better chance to assemble a network to match its sales aspirations.

And with more models on the horizon, the next few years could represent a significant turning point for the brand in the UK.

The 8280 slots in above the lighter-weight two-model 7-series, which runs the same 6.1-litre engine block but with a single turbo that limits output to 246hp on the 7250.

In reality, the 8 is a closer match to the bigger 9-series, against which it offers a more appealing balance of weight and power for contractors clocking up a lot of haulage miles.

Its arrival effectively wipes out any lingering interest in the 295hp 9290, which is the lesser-powered of the 9-series brace. And with further 8-series tractors slated for launch over the next 12 months, the overlap is likely to be more profound – rendering the 9290 redundant.

For heavy fieldwork, Deutz’s best candidate is the 336hp 9340, though since its debut in 2014 it has sold in relatively low numbers.

Talk of an 11-series has gone quiet. A prototype was first shown at Agritechnica way back in 2013 and production was expected to follow soon after, but the low-volume 440hp segment is not currently a priority.