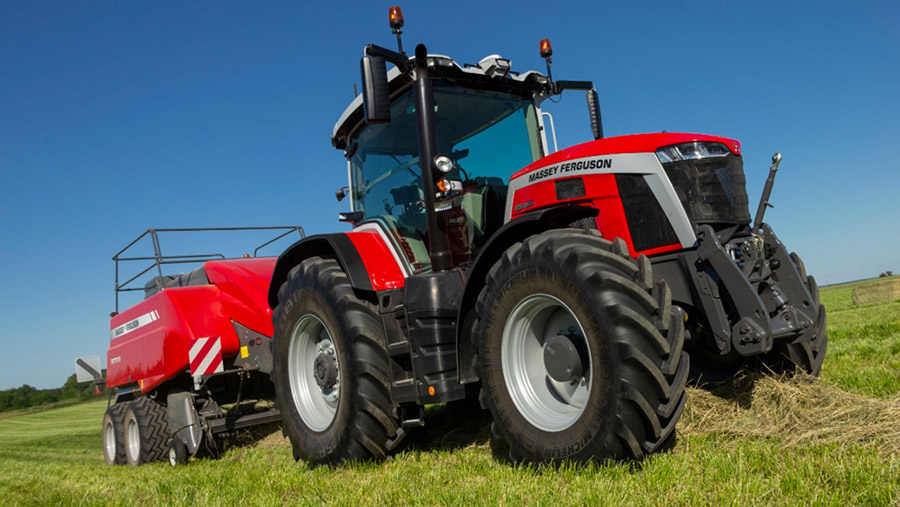 Massey Ferguson looks to have delivered the machinery surprise of the summer after launching a radically redesigned 200hp-plus tractor range.

The quirky-looking four-model 8S series runs from 205hp to 265hp and directly replaces the quartet that made up the top end of the 7700 range.

Massey says it started with a blank canvas, giving it a chance to address some of the old tractors’ major shortcomings – in particular, the six-pillar cabin that had seen very little change since it first appeared on the 6100 series back in the late 1990s.

In fact, the maker claims that the only cab fitting to have made the jump from the 7700s to the 8S is the Power Control shuttle lever.

Similarly, the front axle suspension system is the lone major hardware component carried over from the outgoing tractors.

Handily, the model numbers have also been changed to denote engine horsepower, making them easier to identify.

The standout feature is undoubtedly the unusual-looking suspended cab.

Massey has left a 240mm gap between it and the engine, which has helped to markedly reduce sound and heat transfer.

This divorce between oil burner and office space has allowed Massey to fit a combine-esque curved front screen that apparently affords better visibility all round. 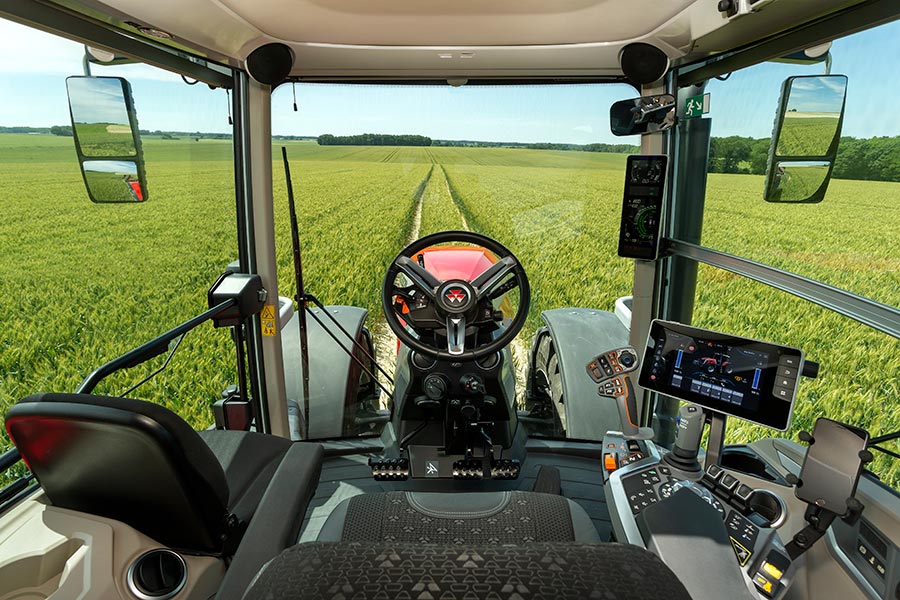 Also gone is the bubble-shaped central dash, replaced by a column-mounted screen on the A-pillar – a popular move among tractor makers of late – and there’s a new wider armrest and revised joystick, too. 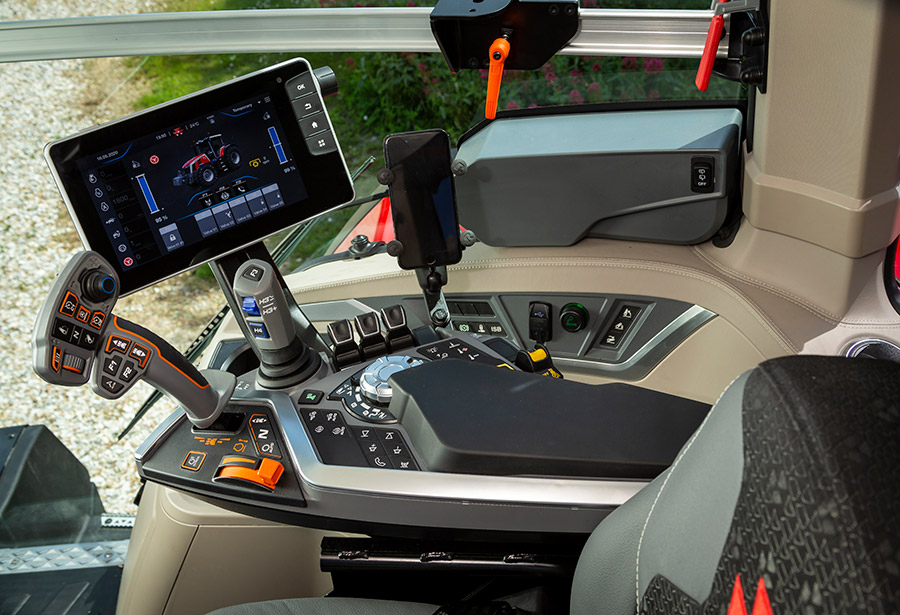 An updated Datatronic 5 monitor, which it shares with sister brand Valtra, houses machine settings and Isobus displays, as well as MF Guide software and the ability to run rate and section control on implements. 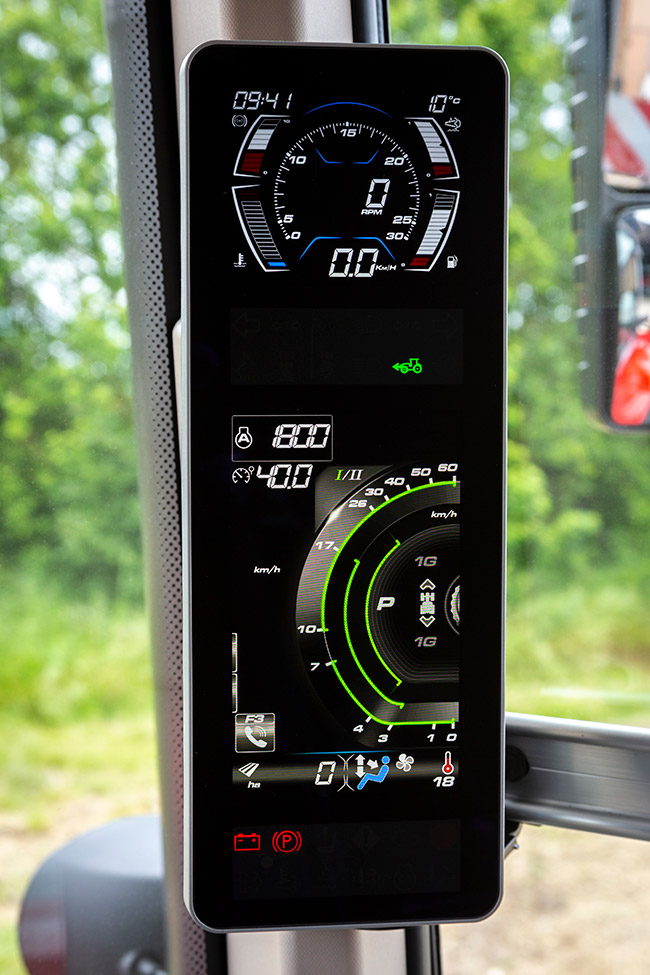 All four tractors run the same Agco Power six-cylinder, 7.4-litre engine as used on the bigger 7700S tractors they replace, which delivers maximum torque at a relatively low 1,000-1,500rpm.

Top power ouputs run from 205hp to 265hp and each model gets a boost function that adds an extra 20hp in certain scenarios.

The engine is Stage 5 compliant without a diesel particulate filter, with the company instead sticking to its combination of AdBlue and a soot catalyst.

There are also a couple of new gearbox options for the 8S.

Most notably, the time-proven Dyna powershift has been reconfigured to a Dyna-7 that offers seven speeds in each of its four ranges for a total of 28 gears. 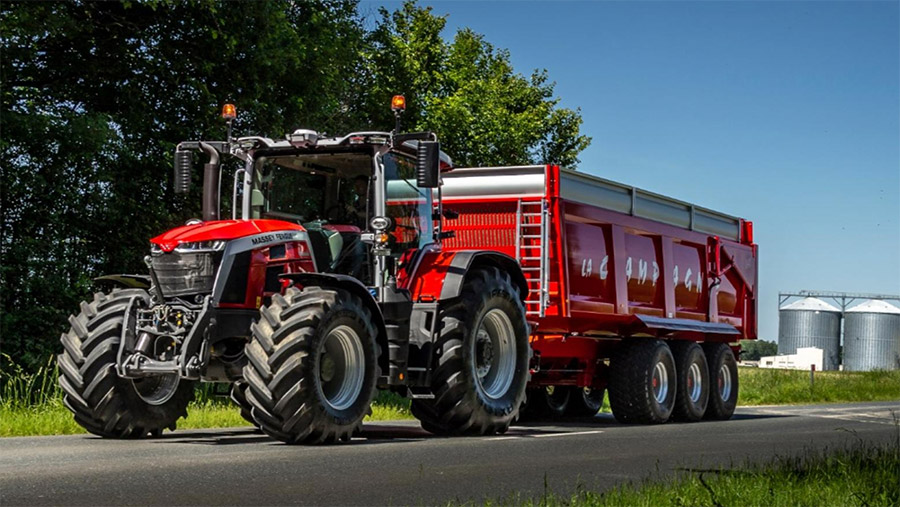 Previously, it was only possible to set a maximum gear and engine rpm for the tractor to target – something that was a major bugbear for owners.

There is also a dual-clutch version, which Massey calls Dyna E-Power.

This delivers snappier changes through the powershift steps and ranges by pre-selecting the gears, avoiding a loss of torque that has a tendency to bring the tractor to a standstill in heavy draught situations.

Several other makers already offer this double-clutch option, including Case-IH and New Holland (with their Active Drive 8 and Dynamic Command setups, respectively) and the Directdrive gearbox from John Deere.

However, Massey is keen to point out that its design differs significantly from the competition.

The E-Power arrangement provides the same number of gears and ranges as the standard Dyna-7, but as well as having two clutch packs on the powershift section, there’s a third unit installed on the range changer.

This means the tractor can anticipate both powershift and range changes.

However, the company won’t be offering its Dyna-VT stepless transmission until 2021.

However, Massey says this hasn’t had a detrimental effect on the turning circle, which is slated at 11.4m. 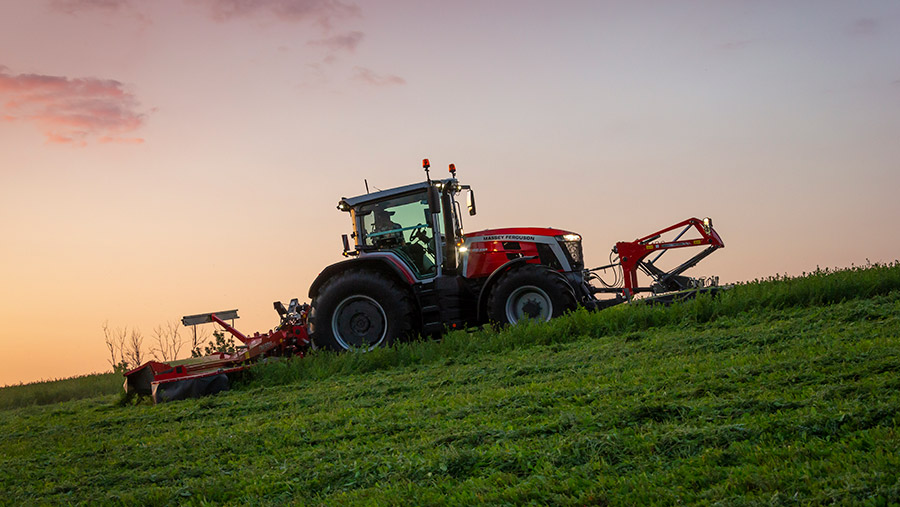 The standard hydraulic pump offers 150 litres/min (up 40 litres on its predecessor) to feed up to five rear electronic spools, but users can upgrade to a 205 litres/min unit, which can also be supplied as an Eco version to offer full flow at 1,650rpm.

Massey plans to get the tractors on to farms pretty quickly, with the company already taking orders and expecting deliveries in roughly three months.