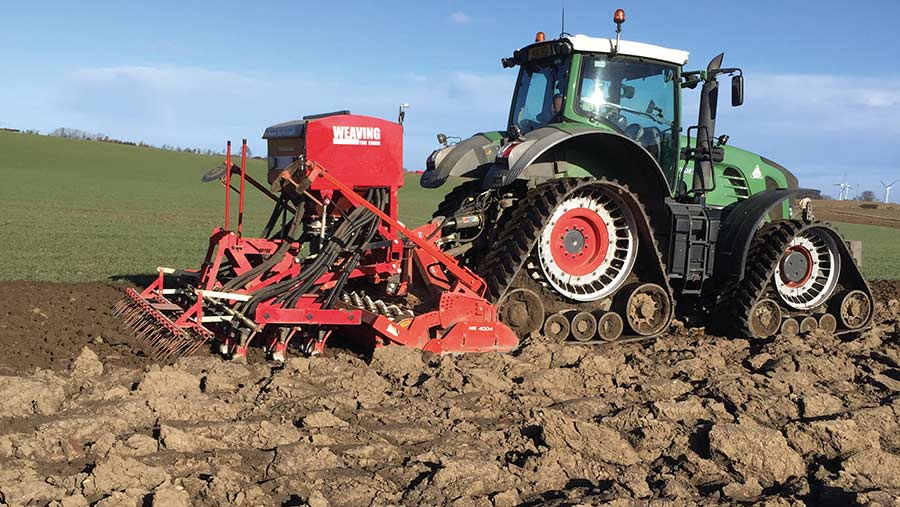 Last winter’s rank weather conditions saw arable farmers resort to all manner of extreme measures to get a crop in the ground, and for one Durham grower it meant shelling out £100,000 for a retrofit Soucy track kit.

Having reached December with only 10% of his 800ha arable block drilled, Stephen Craggs decided to kit up the farm’s Fendt 936 with low-ground-pressure running gear.

The business specialises in growing and processing low-input spelt wheat, which relies on a cold snap to vernalise. So, having invested millions in developing the niche market over the past three years, he couldn’t afford to let his supply run dry.

His standard drilling outfit – a twin-track Challenger MT765C and 6m power-harrow combination drill weighing almost 25t – had caused a Somme-like mess on the ploughed headlands and there was a dearth of lighter-weight alternatives in the farm’s cultivations arsenal.

“We’re a risk-taking business and we didn’t want to jeopardise the spelt enterprise that we’ve ploughed a lot of money, time and effort into by failing to produce a crop,” says Mr Craggs.

“Despite having 95% of the farm ploughed by 20 September, it rained relentlessly from then on. We tried several times to get drilling with the Challenger, even using the Trimble RTK guidance to miss every other bout and reduce the tightness of the end turn, but it slid down the hills and dug huge ruts on the headland that eventually had to be levelled with a 360 digger.

“We knew if we could get the seed into the ground and give it time to vernalise, then we’d have something come harvest. Spelt is pretty resilient with its protective husk to protect the grain, so it can withstand less favourable conditions that would cause modern wheat varieties to rot.”

Back to the drawing board

Not knowing the exact cut-off date for reliable vernalisation meant time was of the essence, so a list of light-treading options was hurriedly drawn up.

He initially considered the laborious prospect of covering the remaining 730ha with a 3m combi drill on the farm’s old flotation-shod MB Trac, or a small 100hp twin-track New Holland that he’d spotted on the internet. However, the meagre 12ha/day output was deemed insufficient.

The left-field option was a Pistenbully – traditionally used to tidy up ski slopes and latterly found on big maize clamps – but its twin track design could well have encountered the same problems as the Challenger.

At the time, John Deere’s four-track 8RX wasn’t on the market, so attention shifted to a tractor already sitting in the yard.

The farm’s 2011 Fendt 936 had clocked 4,800 hours but was no longer pulling its weight. Without the grip to reliably drag a six-furrow plough through the farm’s devilishly heavy and slimy clay, it often sat idle and was reduced to lesser duties such as corn carting.

Mr Craggs looked at dualing-up the Michelin 710 R38s or fitting flotations. However, both were likely to cost the best part of £20,000 and leave relatively deep wheelings that would have been difficult to pull out with a 4m combi drill.

Instead, he decided to head down the alternative route of retrofitting a set of low-ground-pressure tracks.

Fendt doesn’t offer a four-belt kit for its tractors, so the only option was to go via a third-party maker.

“We spoke to a few companies, including Zuidberg, but most were talking about a four-month wait, which we certainly didn’t have time for. The breakthrough came when Brocks Wheel and Tyre managed to locate a set of Soucy S-Tech 800s ready-made for a 900-series Fendt that were at an Italian dealership.”

However, Mr Craggs had to make some modifications to the tractor prior to the two-week fitting job.

The pick-up hitch was replaced by an extended drawbar to take account of the tracks’ extended footprint, and the standard linkage stabiliser arms were upgraded to a space-saving hydraulic kit.

Fitting them involved splicing into the spool block, allowing the lock point to be altered according to linkage position using the tractor’s standard in-cab monitor. 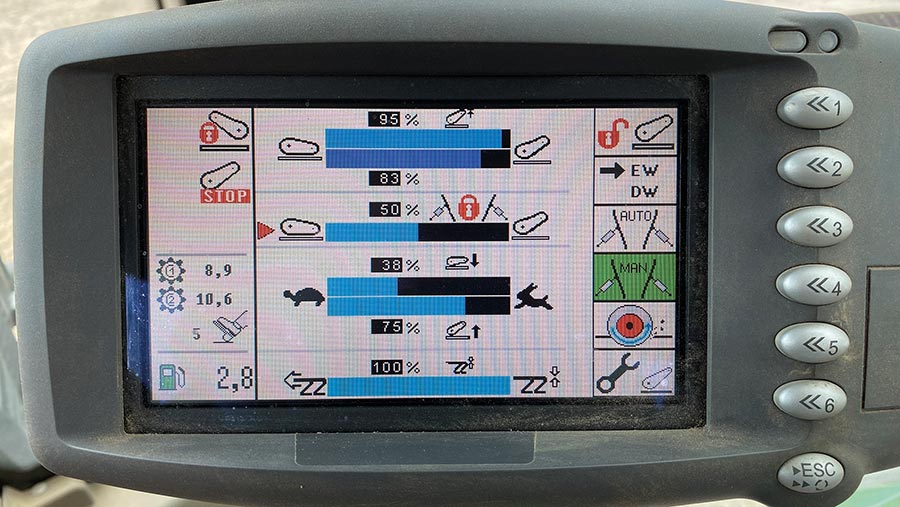 These two relatively minor sounding alterations added the best part of £10,000 to the £90,000 cost of the tracks. The tractor wasn’t GPS-ready either, so it had to be kitted out with a Trimble auto-steer steering wheel rigged up to the farm’s RTK base station.

Though the end price looks hideously high, the decision wasn’t as risky as the fee suggests, he says.

“It gained us a winter crop in the most difficult conditions and avoided having to resort to sowing spring barley that would have delivered a tiny margin.”

“Admittedly, it’s easier for us to calculate the direct impact of the investment, as we take the crop all the way from field to fork and have control of the product’s price. For other arable growers it’s more difficult, as they’ll be sensitive to fluctuations in the global grain market.

“It also meant we could get more from a high-spec tractor already on the farm and stick with a brand we like, without having to shell out hundreds of thousands of pounds on a whole new machine.”

Completely changing the tractor’s running gear inevitably meant there were a few sacrifices to make.

Most notably, it slashed the top speed from 65kph to 45kph. This hasn’t turned out to be a particularly big deal though, as the tractor no longer clocks many road miles.

“They don’t feel like a retrofit, which came as a bit of a surprise to us, and the tractor’s cab and front suspension irons out most of the bumps. There’s no obvious difference in turning circle either, and the steering is just as light as before.”

The kit has also lifted the tractor up by about 280mm. It means the pto runs at a less-than-ideal angle to the drill, so the farm has a spare shaft in stock ready for when it eventually pulls itself apart. The linkage is higher too, which meant fitting 2in longer tines on the power-harrow. 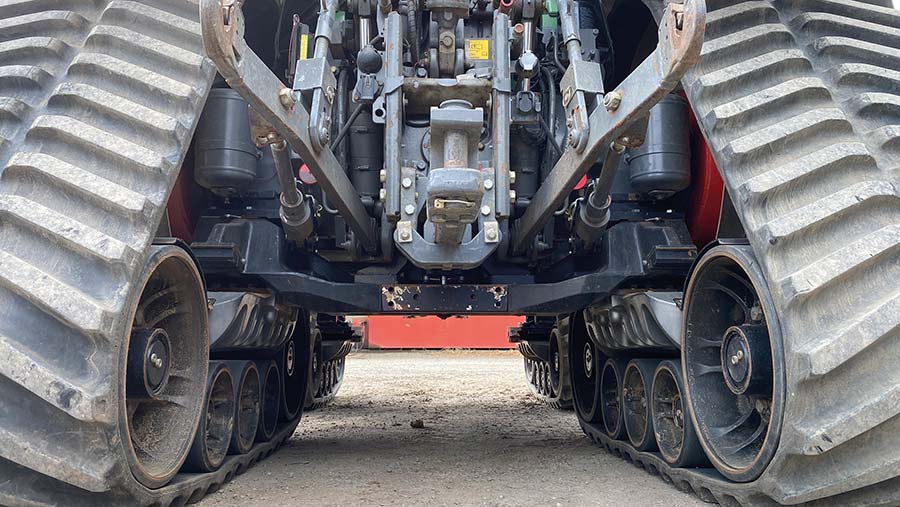 Remarkably, the heavy-duty framework, slung under the chassis and bolted to the original castings, has upped the tractor’s weight from 11t to 17t. Coupled with the fact that the tracks sap more power than wheels, it meant the Fendt was frequently pushed close to its limit.

“When we come to replace the 936, we’ll probably go up to a 942 to make sure we’ve got the power. We’d also order the tractor track-ready to save a few quid and the palaver of retrofitting different stabiliser arms.”

The farm runs a fairly heavy cultivation and drilling regime to beat the heavy clay soil into submission. Until now, a pair of tracked Challengers had done all the ploughing, cultivating and drilling.

However, to lighten the load, Mr Craggs enlisted Weaving to fit a tine drill to his brand-new 4m Kuhn power-harrow.

“We wanted to avoid running discs that churn the soil too much and Suffolk coulters, which struggle to reliably get the seed in the ground in wet conditions.”

The new outfit was sent straight to work on the slumped ploughed land when it arrived at the farm in January.

“The conditions were grim, with standing water in some places, and the working speed was reduced from 8kph to 5kph, but the drilling was wrapped up by mid-February.”

Having a huge 1.8sq m footprint under the 25in-wide front tracks and 2.68sq m under the 30in rears meant it left little more than a surface mark, so the plants were still able to root down.

“It all but eliminated headland scuffing and most of the field edges have ended up with a respectable crop. The modest surface compaction also meant we didn’t have to run the soil working components so deeply.

“We actually ended up with 85% of the crop almost perfectly drilled. It was then rolled after a couple of months, which broke down all the fist-sized clods on the surface.

“Yield-wise, we expect it to hit close to our 7.5t/ha average – a pretty good result considering the state of the land just eight months ago.”

The business first diversified its mainstream arable operation three years ago off the back of a pub chat about supplying a local bakery with flour for sourdough bread. 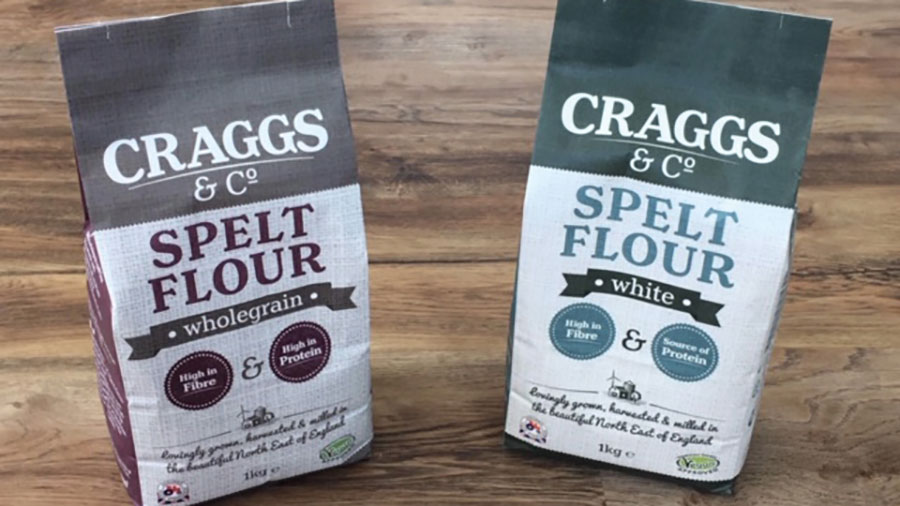 After growing a small 10ha block of the low-input heritage grain in the first year, managing director Stephen Craggs has gone on to establish strong UK and overseas markets.

As well as the farm’s own crop, he has growers dotted across the country that provide grain to be milled at the on-site processing unit. Waste husks are used to feed a biomass plant.

The development of the business has been impeccably, albeit somewhat fortunately, timed to coincide with a boom in demand for flour brought on by the coronavirus pandemic.

The milled flour, the first spelt product to get a three-star rating in the Great Taste awards, is sold directly to consumers via an online shop, as well as through artisan bakeries.