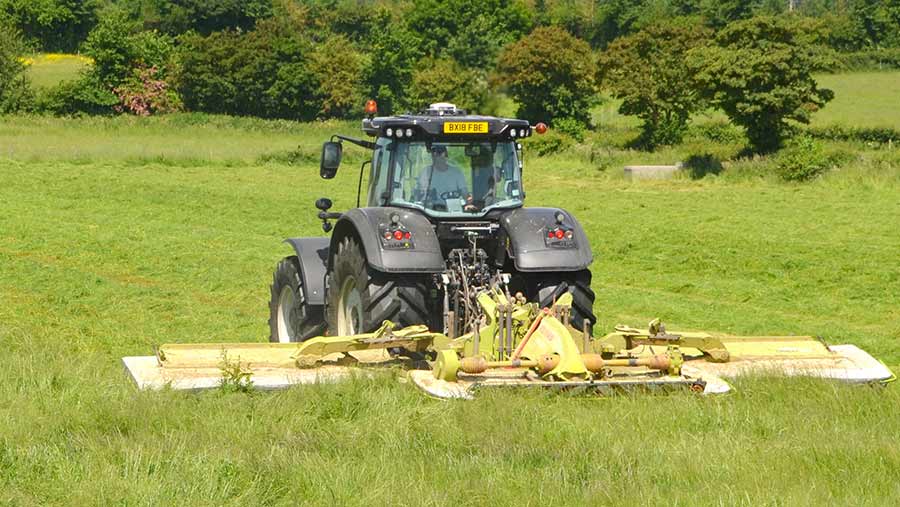 Valtra has finally let its heavyweight S-series loose on the 400hp tractor scene and, armed with lorry loads of torque, a proven driveline and a redesigned cab, promises to unsettle a few of the traditional high-horsepower campaigners.

It was back at the tail-end of 2013 that Valtra announced the launch of its fourth generation 270hp-390hp S-series tractors, but we’ve had to wait until now to see any production machines in the flesh.

Issues with previous incarnations of its flagship tractor range meant the Finnish company insisted on ironing out any gremlins before bringing them to market, which is sensible stuff; except the process has taken nearly five years to complete.

However, there have been some upsides to the delay – during that period the company has added a new armrest, joystick and touchscreen computer that have the potential to position the S-series up there with the big boys.

With its sleek lines, curvy cabin and angular LED lights, the S394 certainly has the looks, but it’s what’s under all that trim that counts.

Muscle is provided by an 8.4-litre AgcoPower (Sisu) six-pot that can generate up to 1,600Nm of torque. That power is put to the ground by a Fendt stepless Vario gearbox.

So the driveline is pretty well-proven (some might say the Finnish power-plant is a better bet than the Deutz motor used by Valtra’s green-liveried Agco stablemates) but what about the rest of the tractor?

Built at MF’s factory in Beauvais, France, these high-horsepower prime-movers have the same cabin, albeit kitted out with different trim and controls.

Two critical things set the Valtra apart – it’s on offer with the Finnish-firm’s TwinTrac reverse-drive system and has the company’s new SmartTouch armrest.

With this in mind, we thought it best to put the new tractor to the test in probably the most common reverse drive application – with a set of triple mowers.

While FW’s test team might know their onions when it comes to what’s going on in the wacky world of farm machinery, we’re certainly not experts in operating this kind of kit, so we thought it best to take the big Valtra to some men that are.

It was back in the early 1990s that Somerset contractors Robert and Colin Targett started experimenting with the idea of reverse-drive mowers. Initially, they adapted an old MF combine chassis to create a self-propelled mowing rig.

It had three mowers arranged to cut 6.7m (22ft) and proved the concept had merit. But more output was required, so the next step was to find something with a bit more muscle.

Wanting to retain the visibility benefits of having the cab right over the top of the mowers and keen to keep dust and debris away from the radiators, the Targetts decided a conventional tractor running backwards was the best solution.

They bought a 177hp Massey 8150 and sent it off to a specialist on the French-Swiss border who relocated the diesel tank, cut a new footwell in the back of the cab for the reverse drive pedals and fitted a secondary steering column which also carried the necessary switch gear for the Dynashift transmission and rear linkage control.

That did a few seasons’ work, first with a set of Claas Corto triple drum mowers and later with a set of Disco mower conditioners.

The modified Massey was eventually replaced by a Fendt 926 with a factory-fitted swivel seat and steering column.

Since then, there has been a succession of Fendts fulfilling the reverse-drive role, the current one being a 2017 930.

Throughout that time the main man in the seat has been Dave Birch. There can’t be many people in the UK who’ve spent more time going backwards in a tractor – each year he knocks down some 3000ha of grass using the firm’s Claas Disco 8600 mowers in reverse. Who better to put the 405hp S-series to the test?

It was towards the end of first cut silage that the S394 arrived at the Targetts’ Somerset HQ.

With the 630-litre diesel tank brimmed and 60-litres of AdBlue on board, it was hitched up to the business’s Claas mowing outfit.

We were pleasantly surprised to see that the tractor’s touchscreen computer recognised the mowers almost immediately after plugging the Isobus cable into the Valtra’s socket.

All looked good, until it came to working out how to hoist each of the three beds in the air independently. Usually this task is fulfilled by joystick buttons assigned to the individual Isobus functions.

Unfortunately, the S-series doesn’t yet have this functionality – Valtra promises a software update will be ready for August – so we were left with operating the mowers as one on a spool-valve.

The alternative option was to lift them individually by tapping the appropriate icon on the screen. That’s all good until you realise that the Isobus screen is only accessible by flicking through the display pages – it cannot be assigned to one of the quarters on the four-way split home screen. Again, the Finns say they’re working on this. 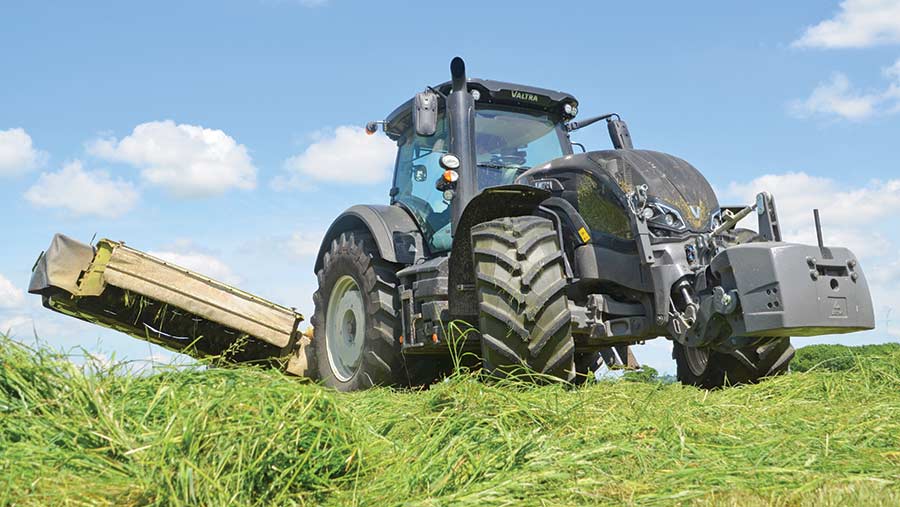 With workarounds found for each of these issues, we set out for the field. Default start-off setting for the transmission finds the pedal as the master control, so a bit of right boot sets it moving and the tractor’s computers work out the right gearbox ratio and amount of throttle according to load.

Given the S-series’ 12t working weight, it’s quick to accelerate to its 50kph top speed – a sign of things to come from the gutsy Sisu six-pot.

Knocking the lever to the right and holding it there for a couple of seconds activates the cruise control. With no real load on the engine, the stepless box quickly closes down the swash-plate pumps and eases over from hydrostatic to mechanical drive.

This does away with that trademark Vario whine and means you can settle back into what has to be one of the most comfortable, quiet cabs in the high-horsepower game.

With 2,300kg on the nose and the triples stacked on the back, it feels pretty stable on the road – the combination of hydro-pneumatic cab suspension, front axle springing and a Grammer Evolution active seat make for a particularly smooth ride.

The cab suspension settings can also be altered in the touchscreen computer.

Once in the field it’s then a case of swinging the seat around into reverse-drive position.

Even with the main steering wheel flipped right up, it’s a bit of a faff to get the armrest and computer display around without clashing.

Once swiveled, the central driving position faces directly out over the mowers with a much smaller column, shuttle and wheel nestled between the driver’s knees. (Unlike the Fendt that takes everything – including the main steering wheel – around with it).

It scores well for visibility, with the rear screen curving around to the B-pillars, allowing a look at the outer tips of the 8.6m-wide mowers. Whether that would be the case with a 9.5m set, we’re not so sure.

It’s immediately clear that the triples we’d got hitched on were never really going to test the Sisu motor to the limits even in heavy, waxy crops of ryegrass.

Usual mowing speed for the Targett 930 is 13-14kph, but we got the big Valtra up to 17-18kph before there was any discernable dip in engine note.

Even then, pto revs barely flicker, which isn’t surprising given it has a 90hp advantage on the Fendt and max torque comes in at a whopping 1,600Nm in boost, compared to the 930’s modest 1,278Nm.

Although not necessarily to be relied upon, the tractor’s fuel readout suggested the S394 was burning between 44-47-litres an hour. That’s a pretty close match to consumption rates for the Bavarian prime-mover usually employed for the job. 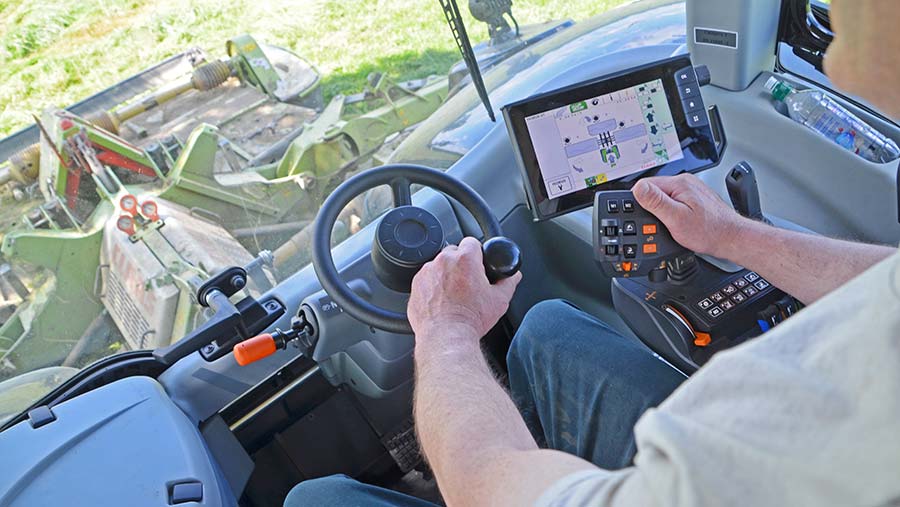 Driving controls are all pretty familiar, particularly the shuttle stick.

The main joystick is well thought out so, rather than standing upright, it sits horizontally and falls more naturally to hand.

Rockers for linkage, two spools and the shuttle are closely grouped but could do with a bit more differentiation to avoid any accidental mix-ups.

Cruise control is activated by knocking the stick to the right, but there’s one annoying feature here – preset speeds are lost every time the driver leaves the seat.

One way to reinstate them is to go into the transmission settings page on the touchscreen. This same menu page has a slider for engine droop settings, biasing the transmission towards maintaining engine revs for pto type work or for maximum speed with minimal revs for transport. 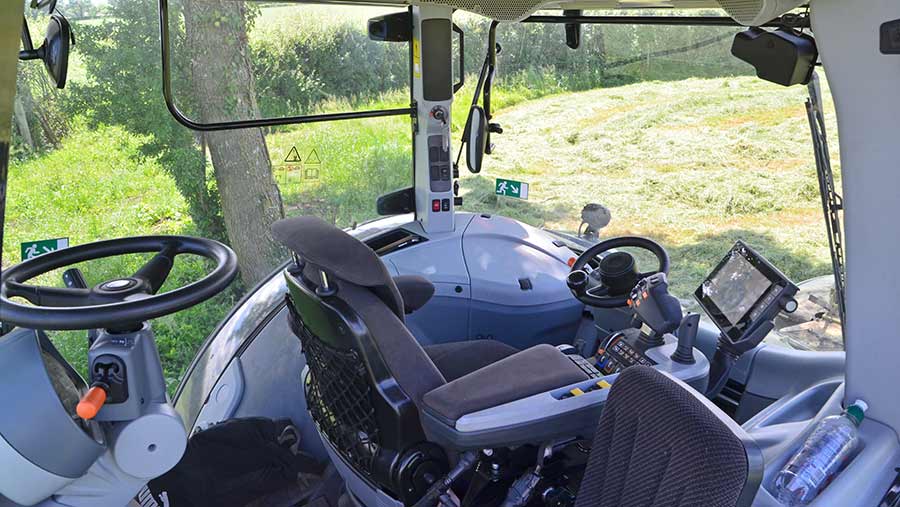 Steering is handled by a Trimble box on the roof, running through the SmartTouch display. It’s dead easy to set up, with an “idiot-proof” Go setting that just requires you to input implement width and A/B way-markers.

Without an active sim card for a mobile correction signal, we were running on bog-basic Egnos.

This was generally fine, but missing every other bout for lazy, wide-swinging headland turns meant satellite drift became a problem as we made our way back up the field.

Paying the circa £600 for mobile correction is well worth it in our book.

While on the subject of steering, initially we struggled to pull the tractor around in a tight arc. It wasn’t until we applied a little bit of extra welly for that last turn of the wheel that the turning circle improved.

Steering with the rear-facing wheel is free and easy for almost the entire length of the ram stroke but requires that bit of extra forearm force to get it to round to the stops.

Power and torque were never really going to be discussion points for the new Valtra flagship – maxing out at over 400hp and with figures for torque that are close to crazy, any work we had for it was unlikely to provide a stern test.

Where the S394 really scores is in the comfort department. The cab has got to be one of the quietest of any machine on the market (you can even have a conversation over the Bluetooth hands-free system) and the ride comfort is super smooth.

The other industry-beater is the new SmartTouch screen – with it’s iPhone-style swipe-ability, it’s clearer and easier to navigate than even Deere’s latest CommandCenter.

It was a shame that it can’t run Isobus through the four-way split-screen run page and those functions can’t be assigned to the joystick buttons, but they’re pretty minor downfalls that we’re told are set to be resolved soon.