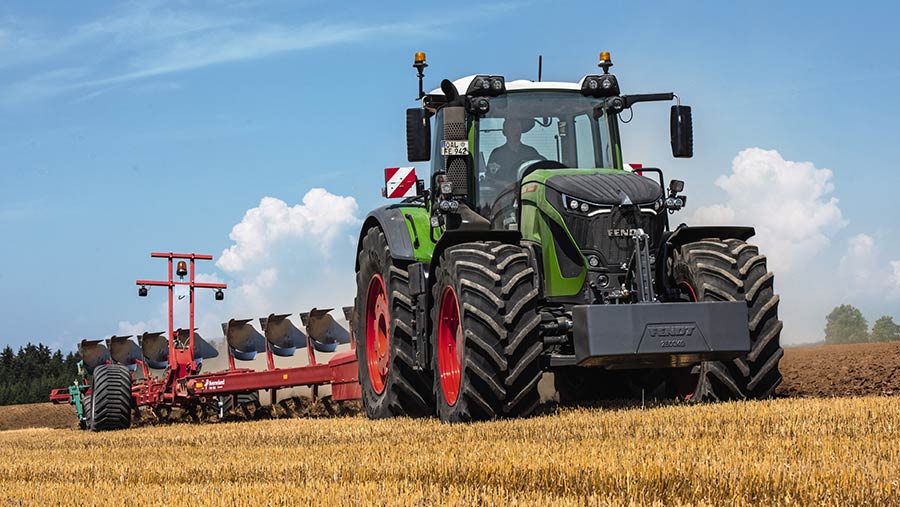 Fendt has finally pulled the covers off its new 900-series wheeled tractors, including a monster 942 model that, at 415hp, pushes them well beyond the landmark 400hp barrier for the first time.

That figure remains someway short of the flagship 1050’s 517hp, but Fendt reckons the package should offer a better balance of power and manoeuvrability for many customers.

The company hasn’t completely altered the existing 900 range, so the five-model structure is still in place and the smallest 927 has made way for the new 942.

The big news is in the driveline department, where Fendt has chosen against fitting the 7.8-litre Deutz engine used in the old range.

Instead, all five models carry a six-cylinder, 9-litre MAN lump that has apparently been built specifically for the tractor.

Features of note include a low idle speed that sits at just 650rpm and service intervals that have been extended to 1,000 hours.

Fendt says it had no choice but to swap engines if it was to hit power outputs beyond 400hp.

It toyed with offering the 12.4-litre MAN from the 1000-series or the 9.8-litre from the tracked 900MT machines, but both engines would have compromised the turning circle in some way.

Another reason the designers gave for picking MAN’s compact motor is that the tractor can sit on 60in track widths for the North American market without needing any modifications.

While the engine is all-new, its TA 300 Vario transmission has been tried and tested on the 1000 series and is a heavier-duty setup than the ML 260 used on the retired 900 models.

The gearbox casing and ratios are identical, but final drives are bigger and axles are longer. These changes see the 60kph top speed come at a settled 1,450rpm (down from 1,750rpm on the old 900s).

This torque output is down to the Fendt iD low speed concept, which distributes torque to the front and rear axles as per the ground conditions.

The front axle gets its drive from the transmission, but has a decoupling clutch to avoid any damage when at speed on the road or on corners.

Put simply, is means the tractor is permanently in four-wheel drive for anything under 25kph.

The standard hydraulic setup uses two load sensing pumps – one at 165 litres/min and a second rated to 220 litres/min. An optional 430 litres/min arrangement is also available.

Apparently, making one of the units slightly smaller has reduced the vibration that would be caused by two equally-sized pumps.

Running the two pumps on separate circuits also means the operator can select hydraulic-hungry implements to work from one pump, leaving less demanding functions to run from the other side without any task being compromised, says Fendt.

This may initially take a bit of thought as to which hole to hook up, but should improve performance in the field. One high-capacity spool is capable of 140 litres/min.

Hard fieldwork may also benefit by an increase in weight. While the old 900s tipped the scales at 10,800kg, the new engine, larger transmission and beefier front axles mean the new versions are 11,700kg unladen.

Total permissible weight is now 20,000kg, so there’s still plenty of capacity for ballasting when necessary.

Fendt’s VarioGrip tyre pressure system is available too, with dealers encouraging buyers to have this installed to try to ensure stronger resale values.

The added weight, coupled with a lower idle and stronger torque reserves, means Fendt reckons there should be some fuel savings to be had, to the tune of around 5-litres/ha.

A raft of new technology has been installed in the cab but, while some of Fendt’s smaller tractor ranges are getting its completely new Fendt One layout, the firm has taken the slightly odd decision of not fitting it on the 900-series – apparently it would be too much of a change for potential buyers.

Minor improvements include eight microphones for crystal-clear conversations and a better sound system with Bluetooth streaming. A clever dry toolbox option on the offside of the cab is a neat addition, too.

Isobus implements can be connected and Tractor Implement Management (TIM) has been added to the 900s to allow the implement to take control of the tractor’s steering.

For TIM-ready forage wagons, the forward speed can be determined by the throughput of material.

To help keep tabs on multiple-tractor fleets, Fendt Connect can send machine data back to central hub to be viewed on a tablet or computer. Information such as fuel consumption, speed, routes and working time is all logged, too.

The new 900s are available to order now in four spec ranges – Power, Power Plus, Profi and Profi Plus – with delivery expected later this year.