In a 500+hp market only worth about 40 units/year, New Holland has upped its game to grab a few more sales by building the world’s largest wheeled CVT driven tractor, equaling the crown held by sister brand Case.

The blue firm’s T9 series, built in the USA, now has the AutoCommand option on the four 36in narrow chassis machines, with the biggest of these being the T9.565, which boosts to 557hp.

The two larger wide chassis (44in) models – T9.645 and T9.700 – will stick with the UltraCommand power shift, while the T9.600 becomes the largest wheeled CVT tractor in production, although boosted power is identical to the Quadtrac 540 at 613hp. 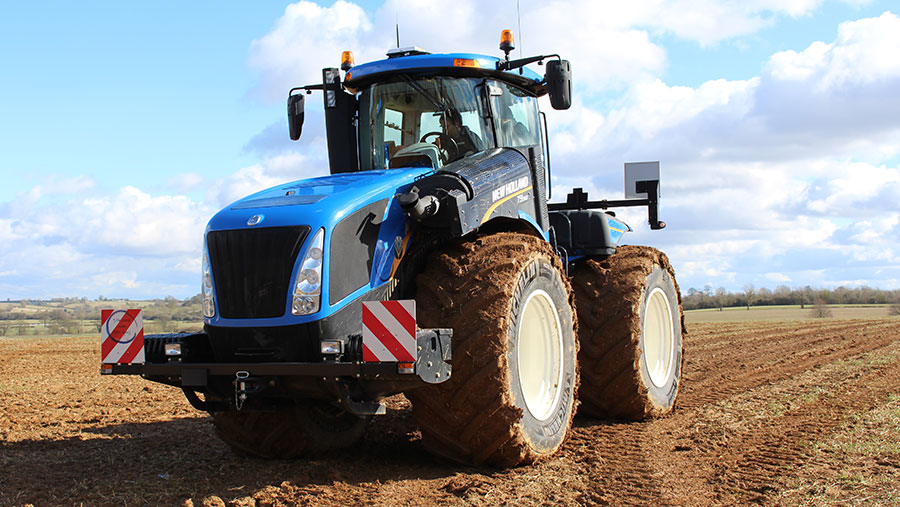 Using the same FPT Cursor 12.9-litre engine as before, the gearbox comes courtesy of ZF, which New Holland says it has been working with exclusively to design and build a gearbox capable of taking the power of the T9.

As with many CVT boxes, the speed range starts with creeper movements a slow as 0.05kph and works seamlessly up to 43kph road speeds, with engine rpm reduced when it’s not required.

New Holland are keen to point out this is different to the box in the Claas Xerion machines, which also use ZF transmissions, with the Basildon-based firm saying it has an exclusive period of use before others firms can get hold of it. 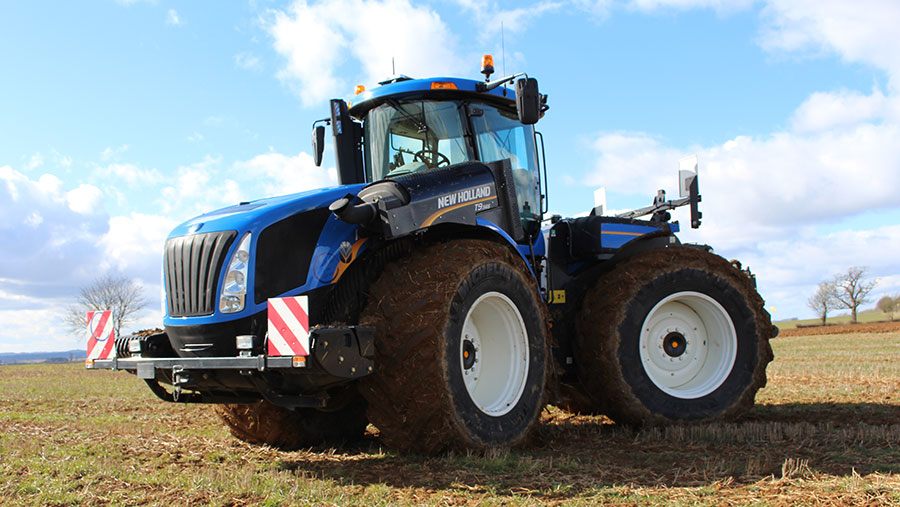 Gearbox at its maximum

However,  the gearbox already appears at its maximum with New Holland’s high horsepower manager Graham Gleed confirming we won’t be seeing this ZF box in the two top models any time soon.

The new box has only been tested to handle a fraction over the boosted 613hp, while perhaps a bigger concern for potential buyers will be how long a gearbox, operating at the upper echelons of its potential, will last. 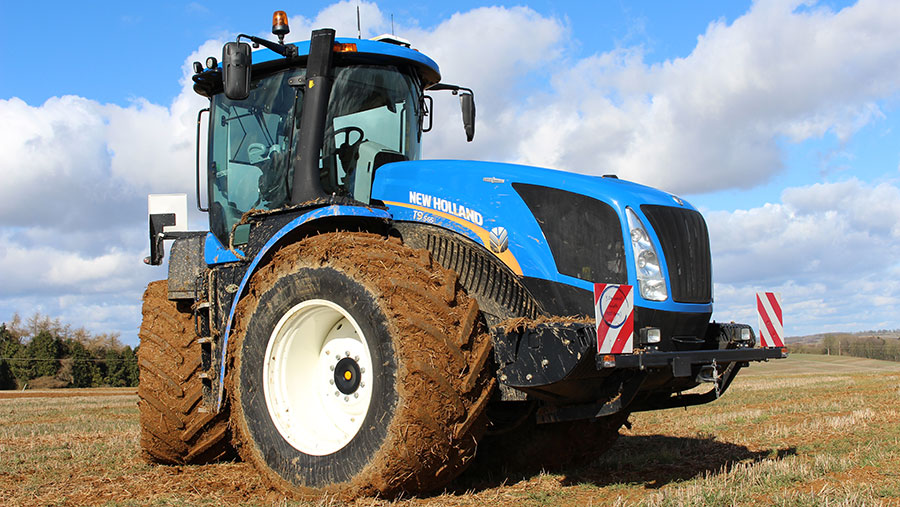 However, benefits of CVT offer reduced operator fatigue, simpler controls and quicker acceleration and braking, although Mr Gleed eluded to the fact that really a CVT box is a comfort option rather than a more efficient way to transfer power.

For getting the power to the ground, a power shift box – which is 100% mechanical drive – sitting in a suitable gear, still has the edge over a CVT, which is about 60% mechanical with power lost driving hydrostatic systems, comments Mr Gleed. 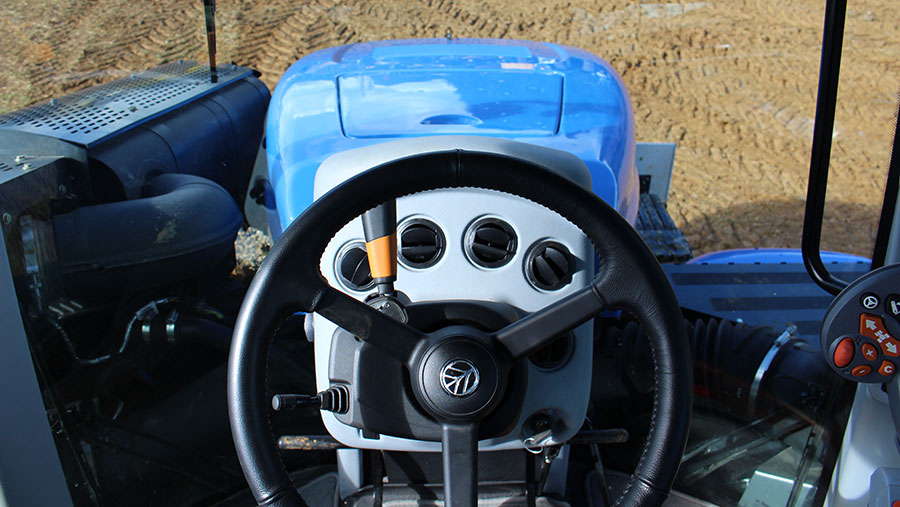 With tyre technologies becoming smarter, farmers are seeing the benefits of owning a big tractor on wheels rather than tracks.

The starting weight of the T9.565 is 16,895kg, compare this with the unballasted weight of a Case Quadtrac at 24,405kg, with jobs such as drilling on the menu, there’s no need for the extra weight.

When stationary, the T9’s load is 40% at the rear and 60% at the front. With a cultivator attached, the weight shifts 10% to the rear so the load is shared equally across the tractor, as opposed to a twin-track crawler, which becomes lighter on the nose when pulling a cultivator.

The turning radius of 10.5m – similar to the T7 SWB – even on huge 900/60 tyres, while the smaller chassis machines sneak under the 3m road width restrictions, even on these boots.

With no concrete UK availability, we were told if you offered a NH salesman the right amount of cash, he’d certainly place your order.

Pricing has also been kept under wraps, although the increase to have CVT on your Quadtrac was between £28,000-£36,000. 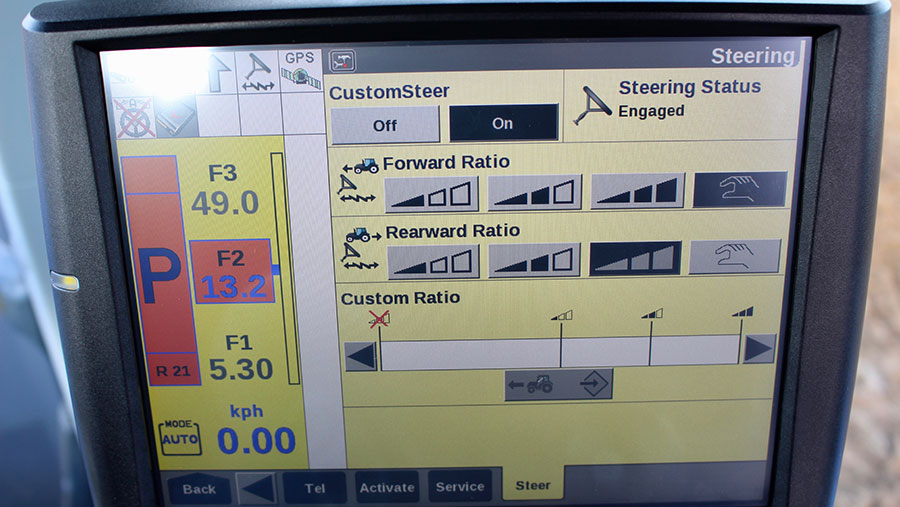 Along with new back lighting in the dash, the T7 range has received and fancy new front axle and an impressive CustomSteer feature, which only adds £300 if the tractor already has Intellisteer guidance.

The standard 4.7 turns of the wheel from lock to lock can be slashed to one, two or three making backing a trailer into a tight shed a breeze.

Sensors on the front axle control the turning speed, which is set up from the cab screen, and individual steering speeds can be added into the headland turn sequence for forward and reverse travel.