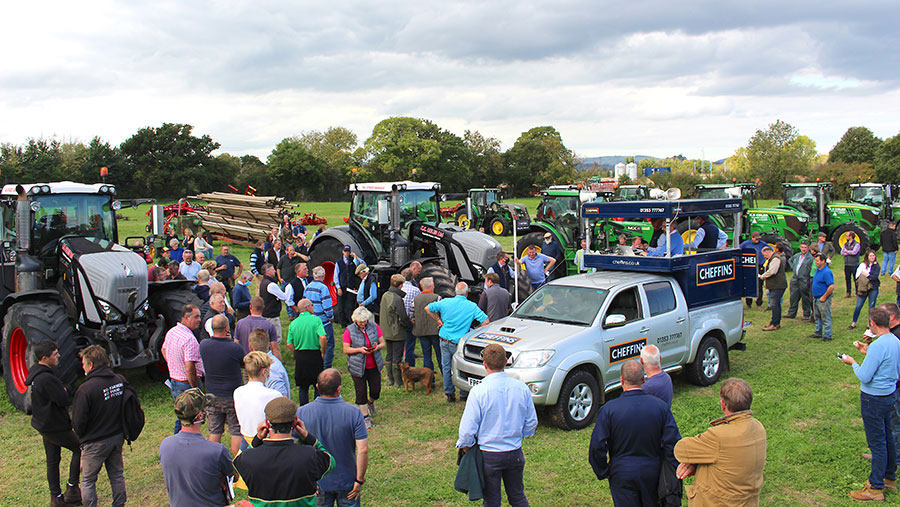 Contractors, dealers and farmers were out in force to see a vast selection of tractors, trailers, cultivators and a lesser-spotted self-propelled swede harvester go under the hammer, due to a change of approach from vegetable growers and packers, KS Coles.

The Somerset-based company was set up by Ken Coles and has specialised in growing swedes for supermarkets. However, the company, which is now headed by son Paul, has decided to stop growing the crop, with pressure from supermarkets mooted as one of the reasons.

No less than 13 tractors were up for grabs, with the Coles family keeping a selection of its fleet to continue growing arable crops. Most were sporting fairly hefty hours, which isn’t surprising, given their intensive workload, although all came with high specs and looked in good condition. 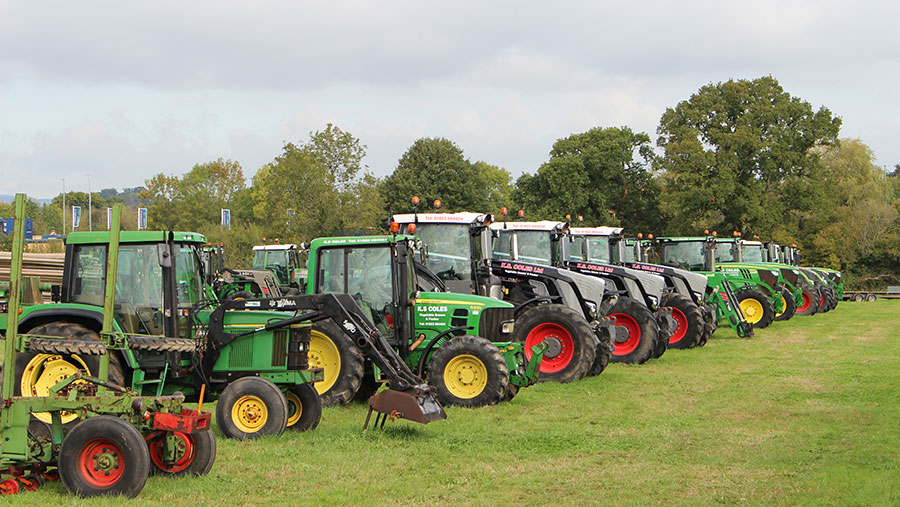 The sale was organised by East Anglian auctioneer Cheffins, and bids were attracted from far and wide via a live online bidding set-up, with internet buyers outdoing the punters in the field on some items.

“There were six-figure sums paid for a number of the best tractors and equipment on offer and the prices paid at the Coles sale are indicative of the lack of good-quality second-hand machinery currently available and the subsequent demand levels from both domestic and overseas buyers,” said Oliver Godfrey, director of Cheffins.

We round up some of the highlights. All prices include a 2.5% buyer’s premium, with an extra 1% for online winners and VAT at 20%.

The star attractions on the tractor front were three Profi-Plus Fendt 930 machines all sporting black paintwork and 50kph Vario transmissions. 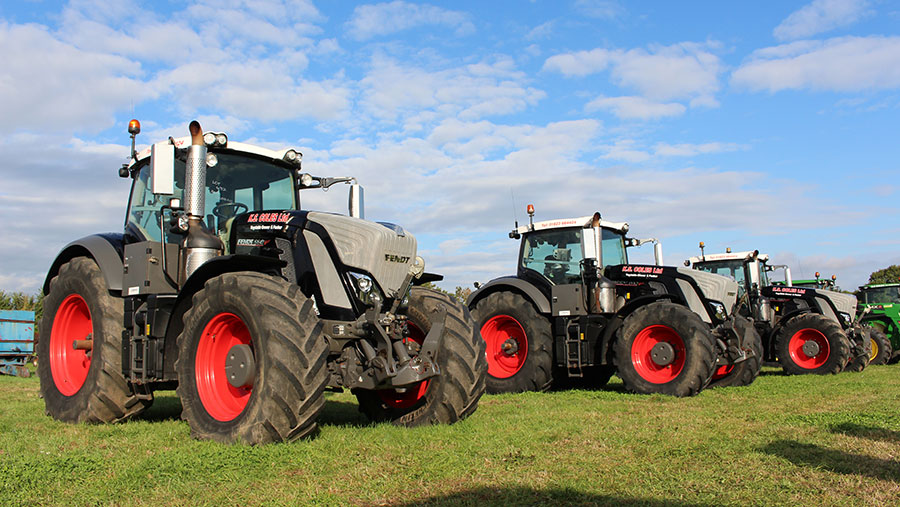 The newest tractors up for grabs were two immaculate Fendt 724s. These sought-after machines still had the luxury of a two-year/4,000-hour warranty intact, with an April 2019 registration date.

The pair had covered some ground in the 17 months of ownership, with one model sat on 1,808 hours and the other on slightly less at 1,708 hours.

They were pretty much identical, both sporting Profi-Plus spec with Novatel guidance, a 156-litres/min hydraulic pump, front linkage and five spools.

Unsurprisingly, bidding was keen, and the eventual price for both machines ran well into six figures.

A couple of older 2011 Fendt 820s would have perked the interest of those looking for a cheaper CVT tractor. There was barely anything to choose between them, apart from the rear tyres offering a little less tread on the 9,161-hour model. The other machine had clocked 10,730 hours.

There was a bit of cosmetic damage with the paint peeling in a few areas, but the tractors were in pretty good nick given the hours and age – even the seats were intact. Spec was high again, with front linkages and 50kph boxes. 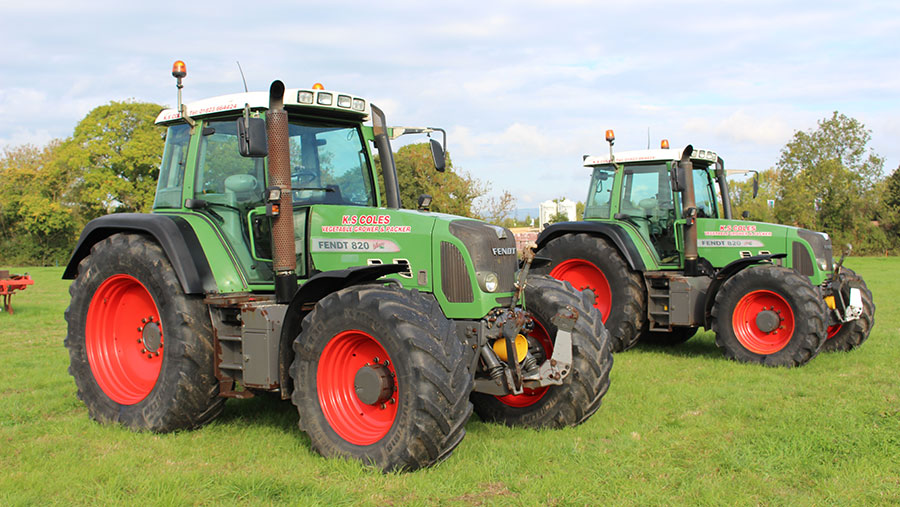 There was another brace of near identical tractors, albeit from the John Deere stable. The two 6190R machines had 50kph Autopowr transmissions, three rear spools and front linkages.

Both came with average hours for their age, clocking up about 1,000 hours/year and were shod on 650/65 R42 rear tyres and 540/65 R30 fronts. They had been on farm since new. The in-cab screen was mounted on the side console, rather than the armrest. 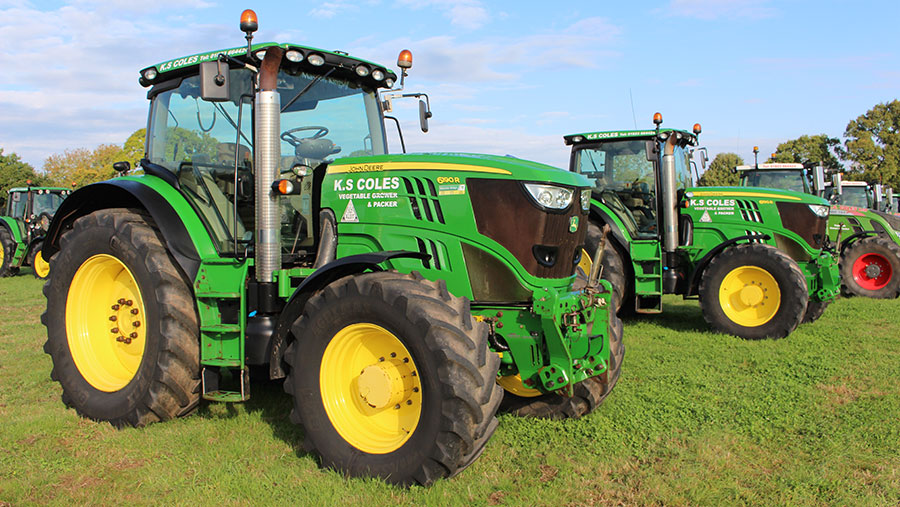 A well-used John Deere 6930 still attracted plenty of interest from the field and online as it came with a factory-fitted JD 683 loader.

Other extras included a Sauter front linkage, three rear spools and the bombproof Powrquad transmission. It could have done with some new boots all round, but had been on the farm its whole life, covering 10,561 hours in the process.

The Fendt Tool Carrier would have been a key piece of the planting jigsaw in the early days of swede growing, but was showing signs of a rather unloved retirement.

It had 9,632 hours on the clock and came with row crop wheels, tyres and spacers, along with a host of attachments for planting and hoeing. It looked a prime candidate for a restoration project, rather than being put into any kind of serious work. 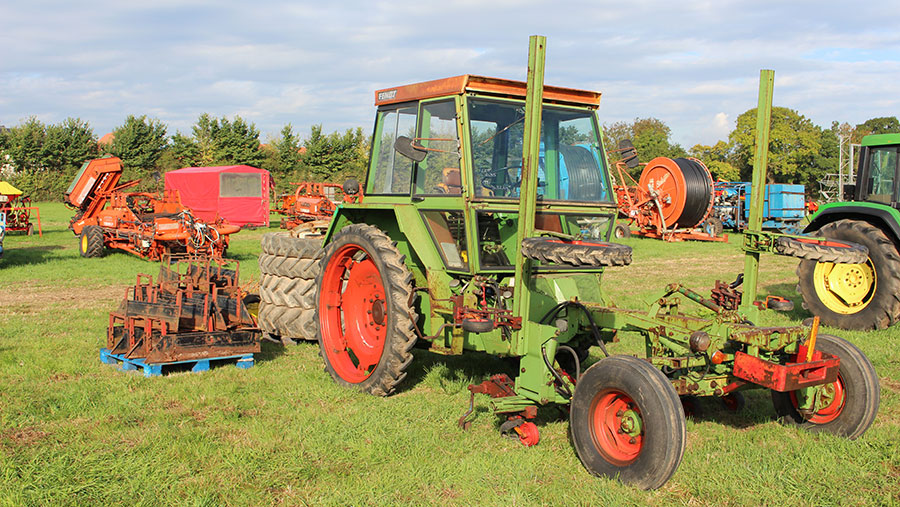 One of the more unusual pieces of kit to go under the hammer was a huge 2011 Asa-Lift SP460B self-propelled swede and root harvester that had been on the farm since new. The little-known Danish machinery builder was bought by Grimme in 2013.

The harvester had covered 7,560 hours and was treated to a brand-new set of Claas Lexion tracks earlier this year, only covering 20 hours since, along with new cross and digging webs and a recent service.

Powering the trike-style unit was a Cat C13 engine and other spec details included a 7t bunker, detachable lifting bed, box filler and cart, and a bunker elevator. Appealing to what must have been a fairly niche market, it still reached six figures. 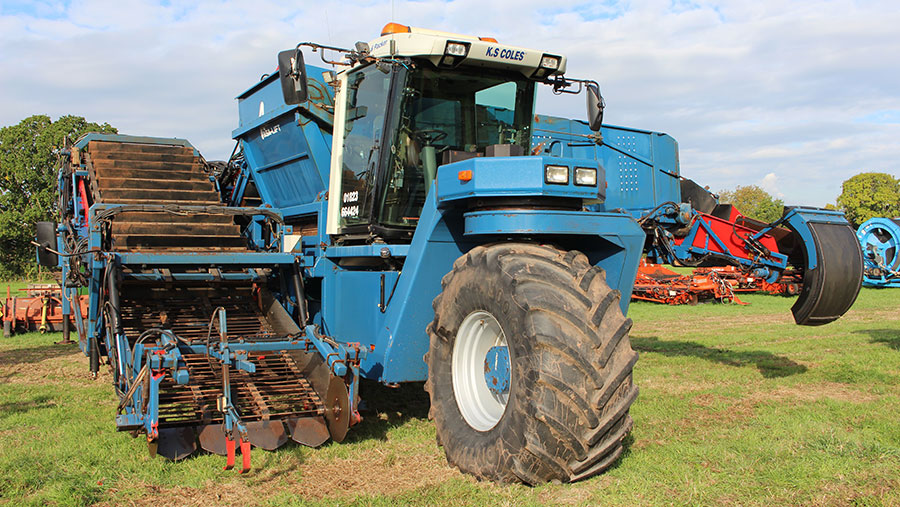 A second self-propelled swede and root harvester was on offer from German maker Horsch, although it was showing a few more obvious signs of age and had a slightly greater 8,856 hours.

Bidding for the harvester struggled, with the winning amount just £5,500, indicative of the work required to transform it back to its former glory. 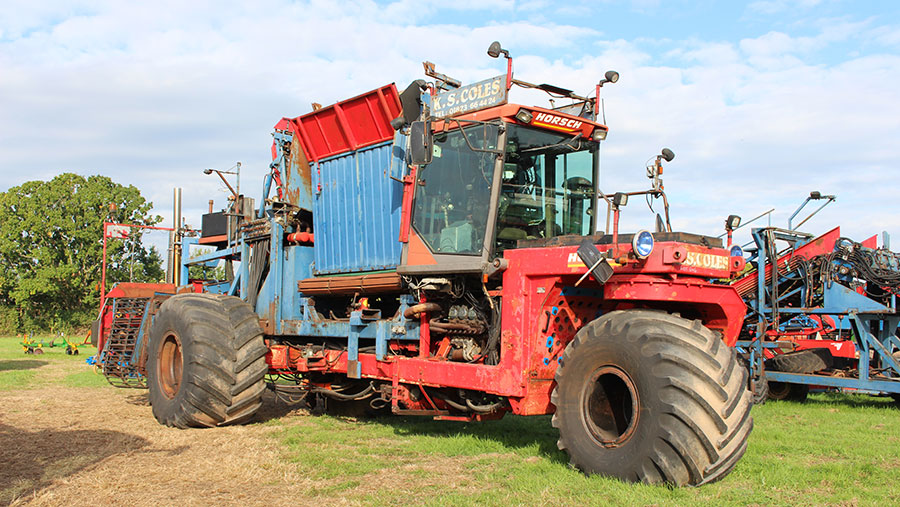 A monster Grimme folding triple-bed destoner with Dromone hitch was one of three on offer. The other two were only good for spares and struggled to make a four-figure sum. 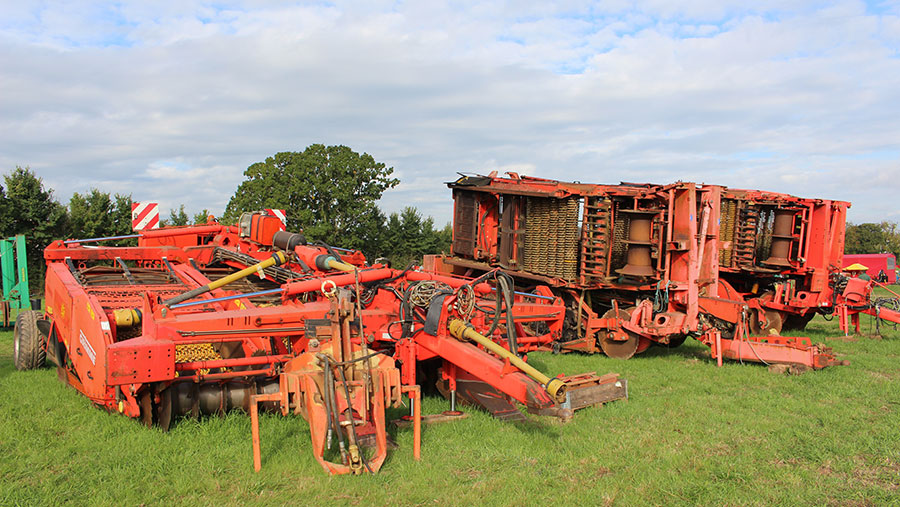 There was plenty of interest from farmers and dealers alike in a smart Sumo Trio 4.5m cultivator. The min-till unit had a Dromone hitch attachment to convert it to run on a tractor’s two-point links and it looked good value, with decent metal all round. 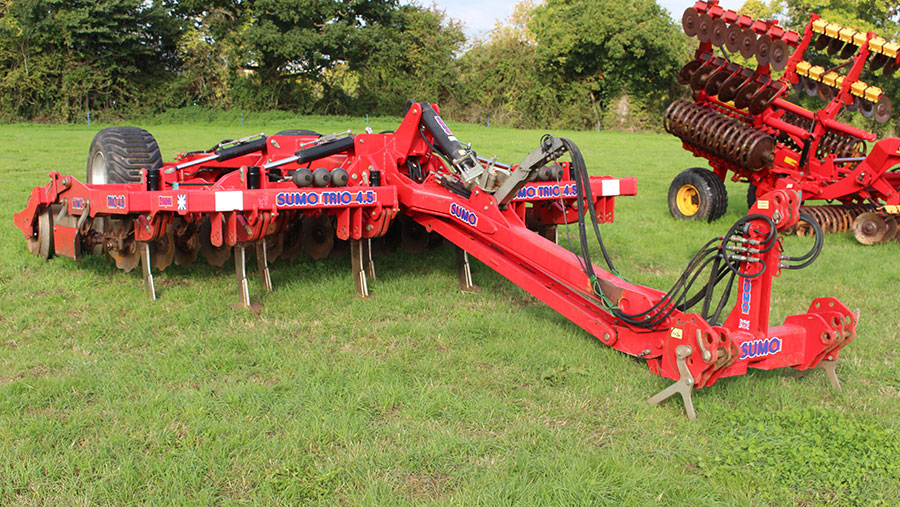 A three-bed 12-row Monosem precision drill was used to sow the swede crops for KS Coles and the unit received a complete overhaul in 2017. It also came with Microsem applicators and two sets of discs. 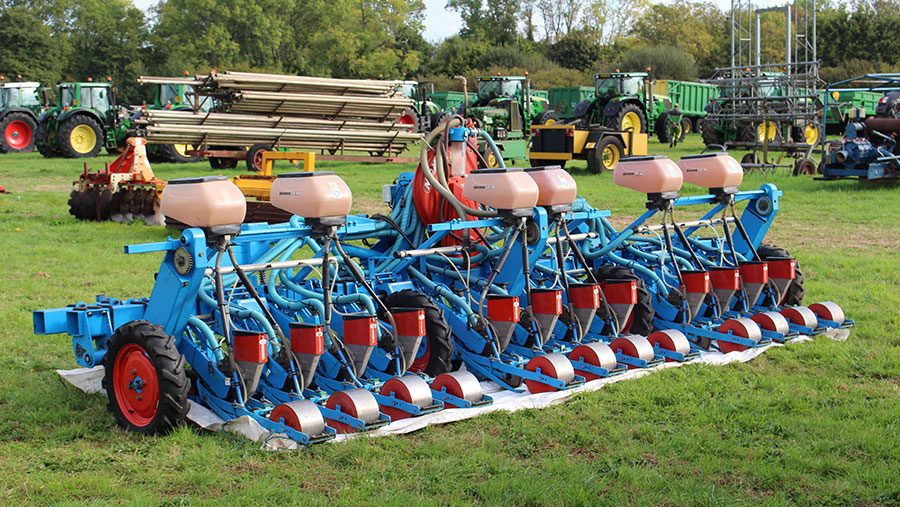 The only self-propelled sprayer on show was a 2009 Bateman RB26 that had covered a hefty 10,822 hours. The 24m, 3,000-litre model had Contour booms and came with two sets of wheels. It looked like a good machine for the money.

A stunning Renault Magnum tractor unit must have been the pride of the KS Coles fleet, with a red colour scheme and some fancy sign-writing. The 2006 model had an MOT valid until January 2021, but had covered in excess of 1,000,000km, so its condition is a credit to the owners. 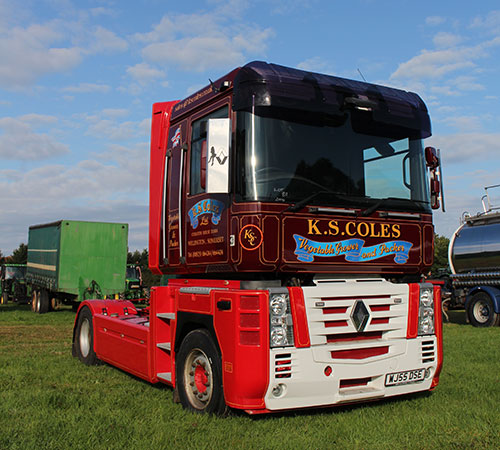 A wide selection of flatbed trailers was on offer, including two high-spec Richard Western models. The first was a 2018 27ft tandem-axle with load-sensing ABS brakes and air suspension. A slightly bigger 2015 30ft unit came with an extra axle that can lift out of work if not required.

This also had load-sensing air brakes and air suspension. They both looked well looked after. 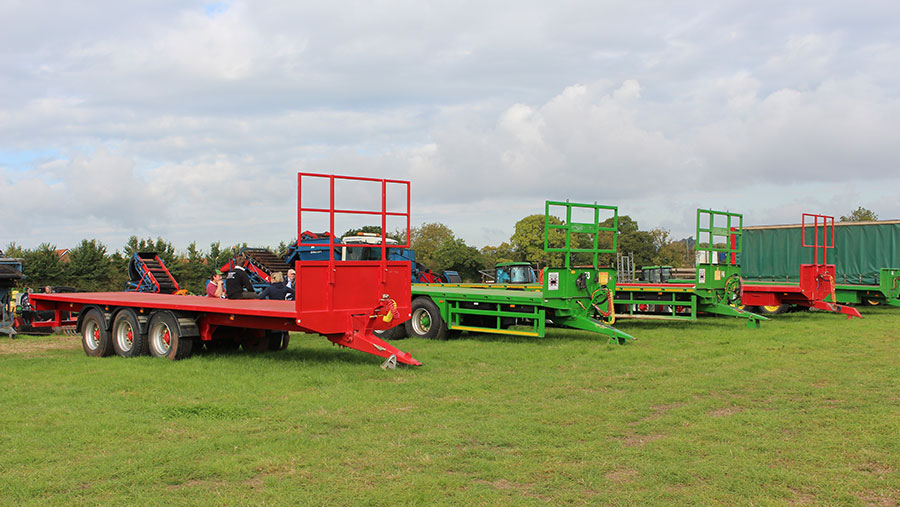 There were two Toyota Hilux pickups up for grabs that had credentials to enter FW’s high-mileage club. An older 1997 2.4TD twin-cab had clocked 227,548 miles and had an MOT until May 2021. The newer-shape 2005 Hilux Invincible double cab came with a covered canopy for the rear, but a few more miles on the ticker, sitting at 335,213. There was a scuff on the front quarter, but it also had an MOT until May 2021.