When it was time to chuck in the chief high-horsepower tractor at Home Farm Nacton, Suffolk, production manager Jason Smith decided to break from the norm and took a punt on an ex-demo Case IH Rowtrac CVX 380.

The farm produces a range of vegetable, root and combinable crops across a 1,900ha block between Ipswich and Felixstowe, with 600ha added to the portfolio over the past couple of years.

A proportion of the farm’s new land is on the coastal marshes and a heavier soil type than the light sandy loams around its Nacton base, so any potential new workhorse needed to provide more power and a higher work rate than the outgoing 340hp Massey 8690.

Obvious candidates for the job came in the shape of a twin-track crawler from Challenger or four-track Case IH Quadtrac, which would both provide high power outputs.

However, both were thought too heavy and inflexible for the farm’s requirements, so Mr Smith settled for a halfway house – a Case Magnum Rowtrac that has wheels out front and tracks on the back. 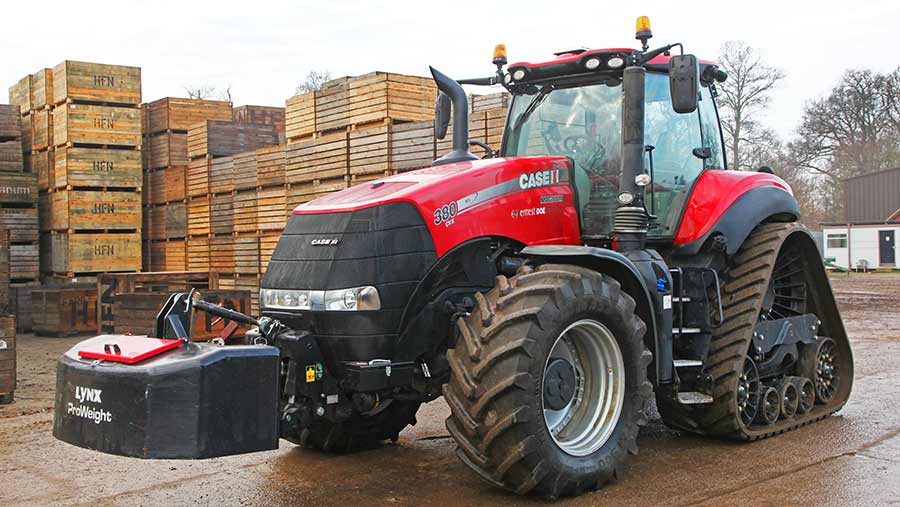 “Driver preference is a big influence on tractor choice and our driver has always been Massey through and through, so we thought there might be some resistance to change.

“Doe Power had one on demo in the local area and we decided to have a look ourselves – and after spending an afternoon on the machine, he really liked it.

“It’s easy to operate, pulls well and gives us more flexibility on the heavier land that we have recently taken on,” explains Mr Smith.

Unveiled to UK buyers at Lamma 2015 and placed on sale later the same year, the 380hp Rowtrac CVX 380 claims to bring the manoeuvrability and handling of a conventional wheeled tractor, but with a lighter footprint.

Its half-track concept also results in less scuffing of soil when turning on headlands, compared with twin-track and four-track machines, and is something that Mr Smith has witnessed first hand since the ex-demo machine arrived last summer with just 80 hours on the clock.

“We don’t want to screw up the headlands when using drawbar implements and the Rowtrac certainly doesn’t cut up the ground as much as you would expect from a tracked machine.

“We have GPS guidance on board, too, allowing our driver to skip rows so he isn’t turning as sharply,” says Mr Smith.

The Magnum’s boost mode kicks out almost 420hp and easily meets the draft requirements of all its implements – so much so that Mr Smith reckons the tractor drinks no more diesel than the Massey it replaced when hitched up to the Progressive.

“It is using 22-26 litres/acre and pulling deeper and quicker than before, so you are getting more output through the day,” he adds.

“It has a fuel tank that carries more than 600 litres, so you can also do more in a day and you aren’t chasing it with a bowser – although we do if we want to keep it working during busy periods.”

One of the attractions of the Massey 8690 was its ease of operation and Mr Smith and main operator Trevor Clack wanted to maintain that characteristic in its replacement.

The farm’s Rowtrac is fitted with Case’s CVT transmission – renowned for being user-friendly – and the ex-demo machine has the top-of-the-range Luxury Surveyor cab, which has full suspension and all mod-cons, including leather seat trim.

“Some of the other brands can be a bit technology-heavy for the older guys, so it needs to be simple to operate. Fendt tractors have a lot of complexity, but if you aren’t making use of it there is no point having it.

“Having said that, it’s by no means a simple tractor and has a lot of extras,” says Mr Smith.

Mr Clack adds that the guidance system installed on the machine has made life easier for field work and he has gained much more grip from the triangular 30in tracks, with wheel slip well down on its predecessor.

Quadtracs sometimes get a hard time for their comfort on the road, but Mr Clack has no grumblings about the ride of the half-track, particularly as he sticks to 30kph, rather than its top speed of 40kph.

“Maintenance also is simple, with easy access to filters and oil level checks and just the usual grease points on the rear linkage and front axle every 100 hours,” explains Mr Clack.

Reliability is a big factor in any machinery purchase and so far, there have  been only minor issues, including a small oil leak, a burst hydraulic pipe and an idler on one track that stripped itself of its rubber coating.

All the niggles have been quick fixes under the tractor’s four-year, 6,000-hour warranty and the machine is set to go to the dealer for its first service and the installation of a telematics system.

The farm is already using telematics on its recently purchased Claas Lexion 760 combine to monitor performance and tweak to optimise output during harvest and Mr Smith thinks it might be useful on the flagship tractor, too.

“We are hoping it can tell us about output, fuel use and idle time and it will be an interesting exercise. Diesel is cheaper than it was, but it’s unlikely to remain that way,” explains Mr Smith.

The Magnum Rowtrac has impressed Mr Smith so far and he says if it wasn’t for the presence of a Fendt 828 on the farm, there would be two of them in the yard by now.

With the company historically running a mix of Fendt, Deutz-Fahr, Masseys and Fords, simplifying the machinery policy to a single-brand tractor line-up is an appealing prospect.

“If we get a few more years’ reliability out of it, we would certainly look at the same Rowtrac again.

“We have already ordered four new Case Pumas, as the service from Ernest Doe has been good and they have been very helpful getting Trevor used to the new machine,” he adds. 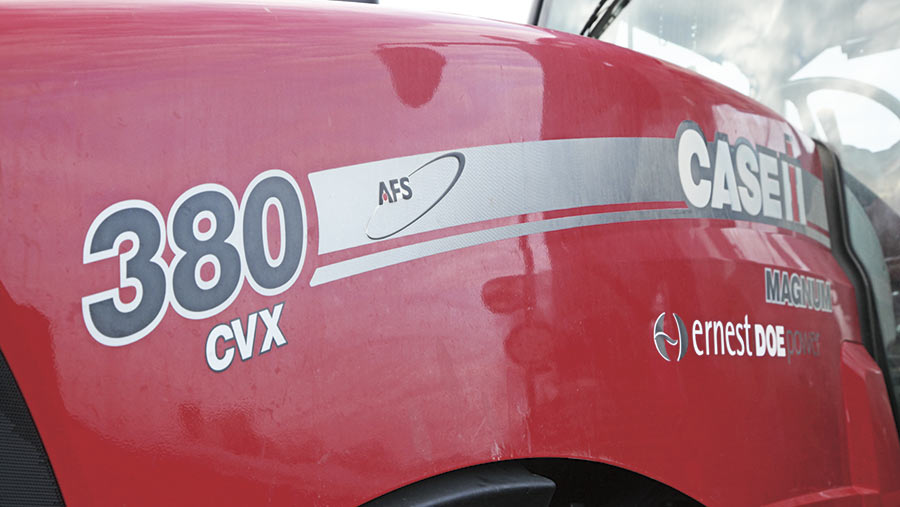