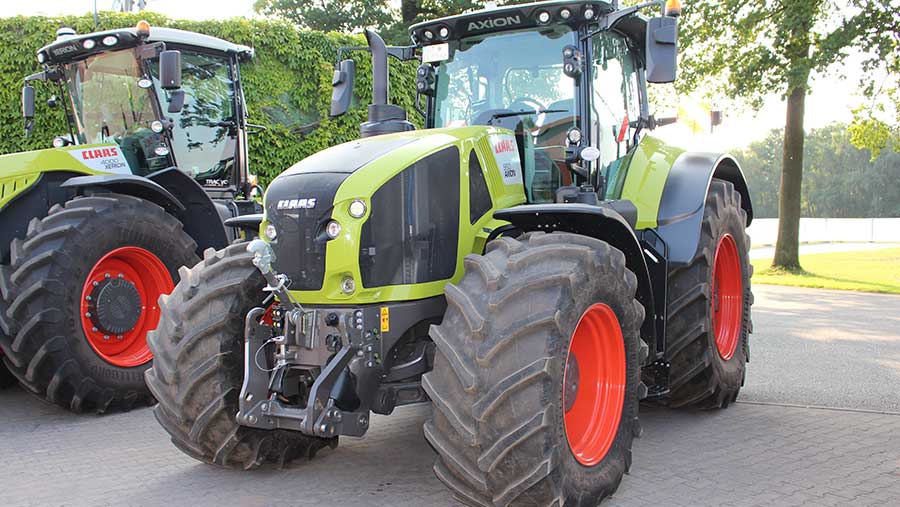 The Claas Axion and Arion tractor ranges have been given some subtle changes including extra horsepower, a new front axle and a middle-of-the-road specification option for those who don’t require all the electronic gadgetry of Cebis models.

The company recently built its 3,000th 900 series machine and claims to have a 10% market share in its power sector.

The Axion range consists of five models, with the smaller 920 getting an increase in power to 325hp and the new 960 chucking out 445hp without boost. All models now comply with stage IV emissions.

The powerplant is still the same six-pot FPT 8.7-litre engine, although maximum power is now available at 1,600rpm, rather than 1,800rpm. 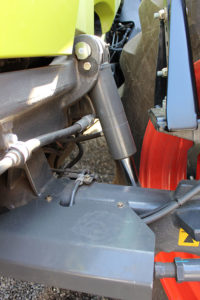 Claas claims its new machines develop 18% more torque than the previous model range, meaning the new Axion 920 has the same power as the old 950, while idle speed has been slashed from 800rpm to 650rpm to save fuel.

There is still the same ZF-made stepless transmission available in Cebis and CIS+ specifications. Load-sensing hydraulics come with outputs of 150 litres/min or 220 litres/min and there is a choice of light packages, with up to 20 LEDs for night work and daytime running lights.

Other useful additions include a storage area under the steps, easy-to-find battery terminals for external use and an airline connection around the cab steps.

A new Arion range-topper will be introduced in 2018 – the 660 model – which has the same John Deere six-cylinder, 6.8 litre lump as current models.

However, it can now boost up to 205hp with the Claas Power Management system.

The new 660 is available only with the Cmatic transmission, whereas the rest of the range can be specced with the Hexashift box if required. The latter now features the loader-friendly Smart Stop set-up, which means the tractor can be brought to a halt on the brakes (without depressing the clutch).

The 600 models now benefit from lower idling speeds for improved fuel consumption and are stage IV emissions compliant as well.

A park function has been added to the left-hand forward/reverse shuttle lever, which does away with the old-fashioned handbrake.

Both tractor ranges come with the same 150-litres/min load sensing hydraulics, also seen on the 800 series.

A new four-post cab is standard, which should have benefits for hedgecutting and verge mowing work. Wide angle mirrors are also a new feature, but only the top-spec Cebis models get LED lights as standard. 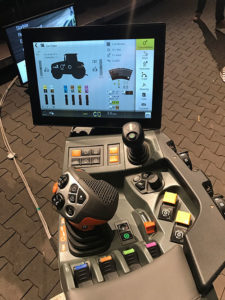 Sitting between the basic CIS and the fancy Cebis is a new option, CIS+, aimed at providing a balance of technology and a simple cab layout.

All three spec levels are available with the Hexashift transmission, while the CIS+ and Cebis models can also be ordered with Class’ continuously variable Cmatic gearbox.

Minor differences on the CIS+ include the better A-pillar colour display, which has functions to change spool valve flows and times, and shows machine information.

Housing the new electric spool valves on the armrest does away with the dated levers found on CIS models, while in their place is a neat storage area. Both specs get auto-steer and four-wheel drive armrest buttons.

There’s also a new lever on the armrest to control spool valve functions, with the CIS+ model getting a forward and reverse shuttle mounted on top.

The Cebis armrest is pretty much the same as before apart from the revamped 30cm touchscreen that has all major functions accessed through hotkeys down the right-hand side.

Up to 20 implements can be saved in the memory for future use, oil volumes can be pre-set for selected spools and it also relays footage from external cameras.

Claas has also switched to Dana axles and reduced the number of grease points to just four after complaints from customers amount ease of maintenance.