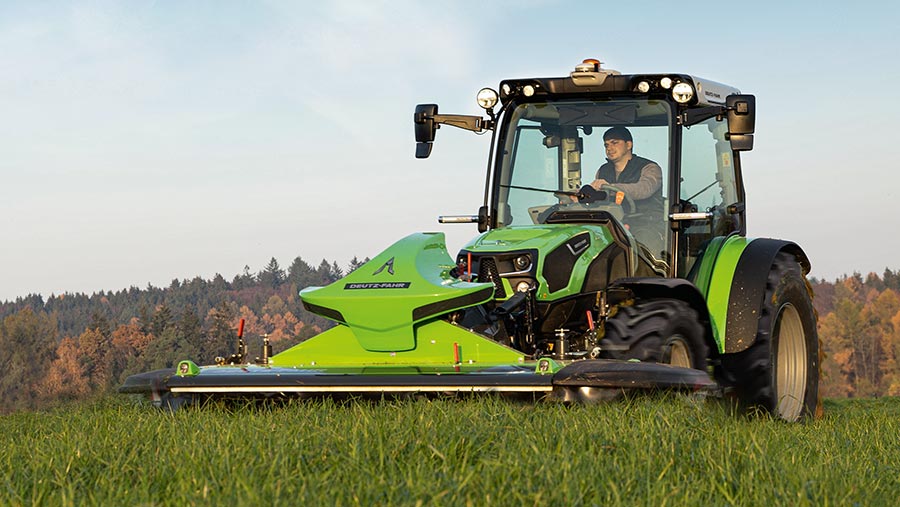 The option of a slick TTV continuously variable gearbox has added an extra layer of sophistication to Deutz-Fahr’s slim-bodied 5D utility tractors.

Many of the components have been borrowed from the firm’s bigger 6-series and narrow 5D vineyard models, which both already offer the TTV option.

The transmission is made by parent company SDF and features two ranges with a maximum speed of 40kph at 1,730rpm.

There is also a new flagship model at the top of the 5D TTV line-up.

The 5110.4 machine gets a four-cylinder, 3.8-litre Deutz engine that develops 113hp and 435Nm of torque, while the two smaller units – 5090 and 5100 ­– can be ordered with a three-cylinder, 2.8-litre engine as an alternative to the slightly more powerful four-potter.

The cab format was launched on the firm’s fruit-focused tractors a few years ago, but has been made wider to account for the extra girth of 5D models.

It includes a Maxcom joystick, which is standard with the TTV transmission and a big change from the stick shifter on previous gearboxes.

Elsewhere, air-conditioning, Isobus, tractor implement management compatibility and guidance are now options on these models for the first time.

The hydraulics have also been upgraded from 54 litres/min to a load-sensing 100-litres/min pump.

Deutz says the UK market for 5Ds is small – about 30 units/year – but the new gearbox and higher-output hydraulics could expand its appeal.

Production has already begun and the starting price is £83,861.