If you’re on the hunt for a reasonably priced second-hand tractor with about 170hp under the bonnet, Valtra’s T163e could well make your shortlist. James Andrews speaks to a current owner to see if it’s one worth considering.

Valtra’s recently revamped T-series tractors are now pretty well established in the UK market, which means there some decent deals to be had on the outgoing model. 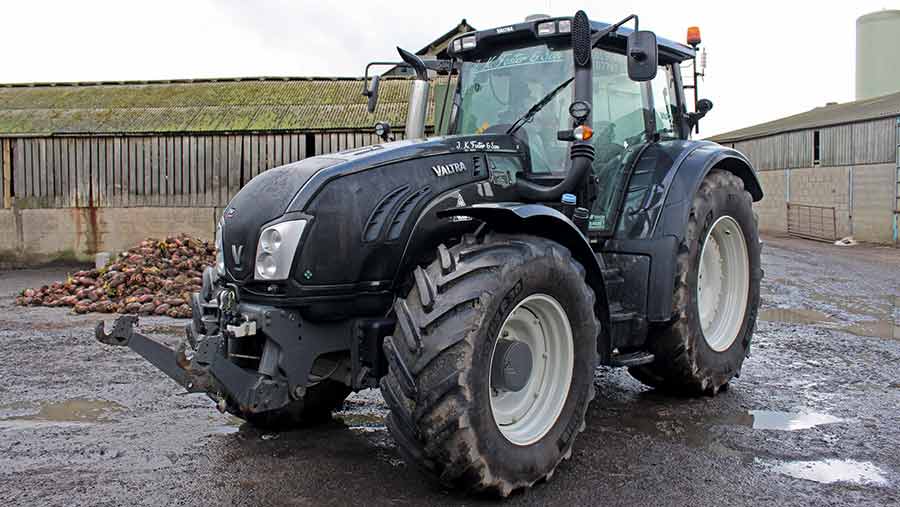 We caught up with Yorkshire farmer, contractor and seasoned Valtra owner Dom Foster to see how he’s been getting on with the T163e Unlimited he bought in early 2015.

I got this tractor to replace a particularly troublesome T163e Versu that I bought in 2014. The original tractor had a catalogue of problems, including a massive gearbox failure caused by a circlip that came off one of the shafts.

It also had to have a new pto clutch pack and steering orbital unit all within the first 950 hours. Because it gave so many problems, my dealer Wilfred Scruton swapped it for the current tractor and I only had to pay an extra £6,800. 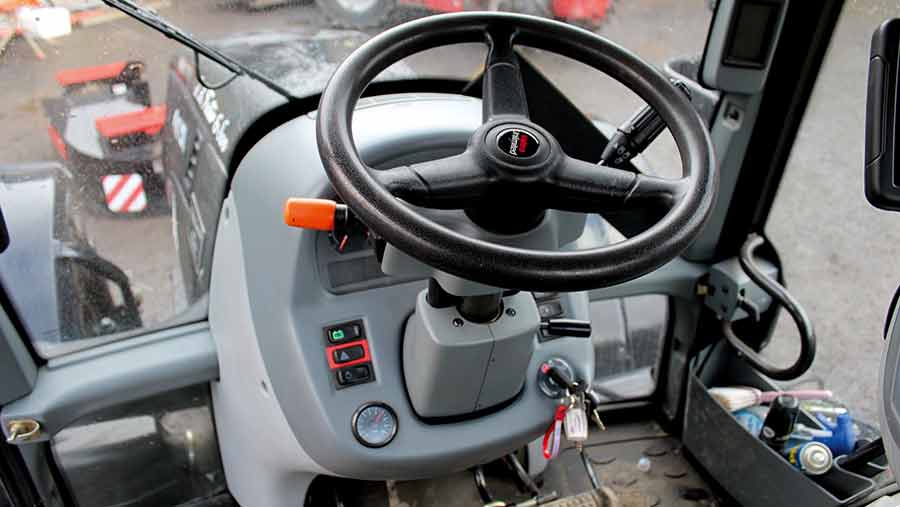 Because I’d had so many problems with the previous tractor, Scrutons upgraded me to the Unlimited spec machine.

That basically means it’s got metallic paint and a leather-trimmed seat and a few fancy extras like a chrome exhaust shield (however that’s already going rusty).

Again, I opted for the Versu semi-poweshift transmission, which has got four ranges with five powershifts in each.

It’s a pretty smooth gearbox – although the auto-shift from ranges C to D is achingly slow – and I like it because anyone can hop on and drive it. 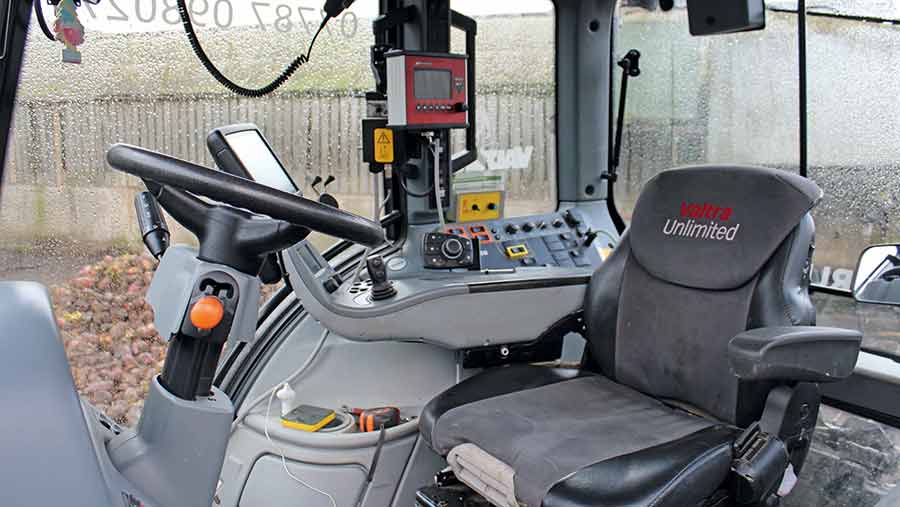 The tractor, didn’t come autosteer ready, but I got LH Agro to retro-fit an autosteer valve block, steering angle sensor and Topcon X20 screen and AG13 receiver. This mounts neatly on top of the little Valtra screen and I’ve also got a remote on the armrest for engaging autosteer.

Since the tractor arrived in January 2015 it’s clocked up 1,780 hours on a mix of jobs including pulling a Dowdeswell five-furrow plough, 3m Lemken Solitiar 8 drill, Kverneland 4032 mower conditioner and Vicon 2160 round baler.

One of the most impressive things about the tractor is the engine. It’s got plenty of power and torque, and when you press the Eco button it hangs on for grim death. It’s basically just a different engine map, but it makes it feel like a gutsy old long-stroke engine.

You really notice the benefits when you’re pulling a heavy trailer up a bank. As soon as you press the button the revs drop, you get loads more torque and it just keeps dragging itself up.

Also, when you’re doing heavy draft work I reckon it uses around 15% less fuel than our John Deere 7530.

One problem is that some of the settings are pretty hard to fathom and the headland management functions are a classic example.

On our John Deere 7530 it’s a piece of cake to put a sequence in without having to look at any instructions.

But it’s such a nightmare on this tractor I haven’t bothered using it. The auto pto function also only switches the pto off rather than on, which is also a bit pointless in my opinion.

The transmission auto-shifting mode is also a bit dim-witted at times. It’s OK for top work, but I never use it for cultivation jobs as it’s too slow to react.

Thankfully this tractor has been far better than the first one and we’ve only had a couple of niggly problems. The most serious one wasn’t actually the tractor’s fault. A fitter had been doing some work at the back end and had looped the cables that engage the creeper box round the top of the lift rods.

Then when one of the lads was driving down the road with a dump trailer and 15t of soil on the back, the cab suspension flexed forwards, knocked the gearbox into creep and the whole rig came to a screeching halt.

Luckily he didn’t crash and nothing was broken. But we did have to jack the tractor up to prize it out of gear.

Other than that, we’ve just had a few minor glitches like one of the LED worklights stopping working. It’s not a massive deal, but we’ve been waiting for a replacement for months.

The bearings on the turnable fenders are another irritation. These wear out for fun and we seem to be constantly replacing them.

But my main grumble is the quality of the chassis paint. This has flaked off in several places and makes the tractor look pretty shabby for a one-year-old machine. It was the same story with the one I had before, too.

Would you recommend the T163e?

I think I was probably a bit unlucky with the first tractor and off the back of this one’s performance I would recommend it.

In fact, I’ve already ordered one of the new T4 models after we had a demonstrator T214 last autumn. You could tell immediately that it’s a completely different tractor and the improvements in the cab have made a huge difference. We also had a New Holland T7.270 and a 6R-series John Deere and I thought the Valtra was a far more impressive tractor.

This time I’ve gone for the slightly bigger T194 as it was the same price as the T174e I wanted. It’s nice to have a bit of extra power, but it’s a shame it isn’t available with eco mode. Hopefully the extra horsepower will make up for it.

It came in a bit more expensive than the old tractor at £80,000, but it’s autosteer ready, has an uprated 160-litre/min hydraulic pump and a front linkage with mid-mount spool block. I’ve also got a five-year/6,000-hour warranty which means I know exactly what it’s going to cost me.