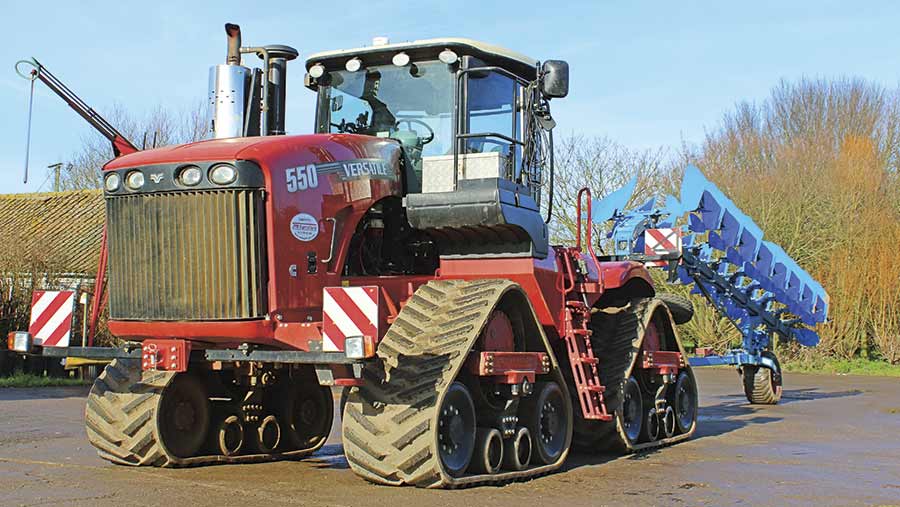 This is far from a direct comparison, but gives each operator’s opinion of his tractor.

Sam Smales farms arable and potatoes with his father Andrew and grandfather Jack.

They grow spuds under contract for McCain as well as supplying their Frying Farmer fish and chip shop in the nearby village of Aldborough.

Before the Versatile we ran a couple of second-hand Case Quadtracs that gave us a fair bit of trouble.

We sent it away to have a new transmission fitted, which set us back about £30,000, but shortly afterwards the engine blew up, too.

To be fair to Case, we didn’t know how these tractors had been treated before we had them and they tend to get some stick on our heavy clay ground. However, after that trouble we thought we should probably change tack.

Why did you buy a Versatile Delta Track?

With two knackered Quadtracs sitting in the yard, we were at a bit of a loss as to where to turn next.

We started to look around for a replacement engine for the 450 and that’s when we came across James Hunt at JPM Agricultural. He offered to take in the two broken Quadtracs as a trade-in against a new Versatile Delta Track and the deal looked pretty attractive.

We also priced up a new Quadtrac 620, but the fact that the Versatile was tens of thousands cheaper and came with a five-year warranty was just too attractive to ignore.

Clearly the Case is a more powerful and sophisticated machine, so it’s unfair to compare the price directly.

Other things that attracted us to the Versatile was the fact it had a Cummins single-cam engine (unlike the more complicated double-cam in our old Quadtracs) and a beefy 16-speed Cat powershift transmission that’s rated to take 1,000hp. It’s also got Camoplast track units, which have a pretty good reputation.

We took delivery of the tractor in August 2016 and put it straight to work on our nine-furrow Lemken semi-mounted plough. Immediately we noticed that it had a much smoother gear change under load than our old Quads.

In those, the transmission would smash into gear with a bang when you were pulling the plough and you would almost come to a stop. It’s hard to know how much of that was down to wear, though.

The Versatile, on the other hand, changes quickly and you don’t lose much of your forward momentum.

A lot of our ground is stiff stuff and it pulls the nine-furrow plough just fine. There’s enough power that the tracks will start to lose traction before the engine is dragged right down, but it has to be pretty greasy on the top.

The fact that the fuel tank is in the middle of the tractor also means its weight distribution stays the same as the fuel level drops, helping it to maintain grip.

The Quadtracs had the fuel tank at the back and we used to find they would slip the rear tracks as the fuel level dropped towards the end of the day.

The Versatile is a pretty simple old lump, so there’s very little in terms of options. We did spec a rear linkage, but turned down the option of a pto.

We also had it fitted with Agleader GPS that is programmed to work with a Trimble receiver.

Our tractor came on 30in Camoplast tracks, which have a more aggressive tread pattern than the ones on our old Quadtracs. We also used to find cleats got ripped off on those, so we hope the Camoplast units will last a bit longer. 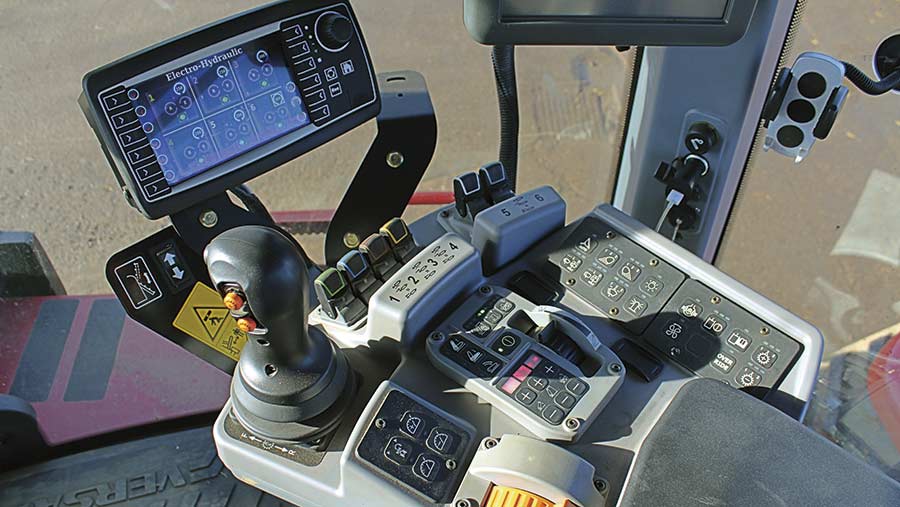 The best thing about the tractor is how simple and tough it is. Most of the components are well proven and they have basically been bolted together by Versatile.

The fact that it is so much cheaper than both the Case and John Deere is another bonus, as well as the five-year warranty.

From a driver’s point of view it is not as slick as a new Case Quadtrac, but it does have the edge over the old ones.

For a new tractor, the controls are very basic and there’s not even a depth stop on the rear linkage control. We resorted to drawing marks on the controller with a pencil to make sure we got in the correct place.

Another particularly irritating part about the cab is the fact that the door opens directly into your face, so you have to duck underneath it.

You also can’t see the corners of the front tracks, which means you have to guess where they are when you drive through narrow gateways or when driving past parked cars.

Versatile hasn’t fitted a decelerator pedal either, so you have to drop down the gears on the headlands leaving the engine revving away.

However, all of these little things don’t really matter considering how much we’ve saved, as long as it proves to be reliable.

As we’ve got the five-year warranty, I think we will keep it until that’s up. We tend to do about 800 hours a year with our frontline tillage tractor, so it should be on about 4,000 hours by then.

If it holds together in that time and doesn’t give us too much trouble there is a good chance we would have another one.