Village blacksmiths started many of the big-name companies in the farm machinery industry, but the family who founded Fendt buck that trend.

Sylvester Fendt began his clock-making business in the German town Marktoberdorf, about 60 miles south-west of Munich, in 1635.

Alongside its main activity, the business made other metal products, including locks, and production continued for almost 300 years.

The big change came in the 1920s, when making and repairing farm machinery became an expanding part of the business.

The increasing importance of the machinery enterprise is probably down to the Fendt family owning its own small farm, making them aware of new business opportunities mechanisation was creating.

Tractor power was still unusual in the 1920s. The Fendt brothers were pioneers, building their first tractor in 1928.

It was used on the family farm, mainly for mowing grass for the hay crop with a side-mounted cutter bar attachment, but also for pulling a trailer. The power unit was a 4hp Deutz petrol engine, with a gearbox providing three forward speeds and a reverse.

Power output was increased to 6hp when a second tractor was built, in 1930. This time a Deutz diesel engine was used, at a time when diesel power for tractors was still a novelty.

This was the first tractor produced for sale. Customers could also buy a single-furrow plough designed for mounting on the rear of the tractor. 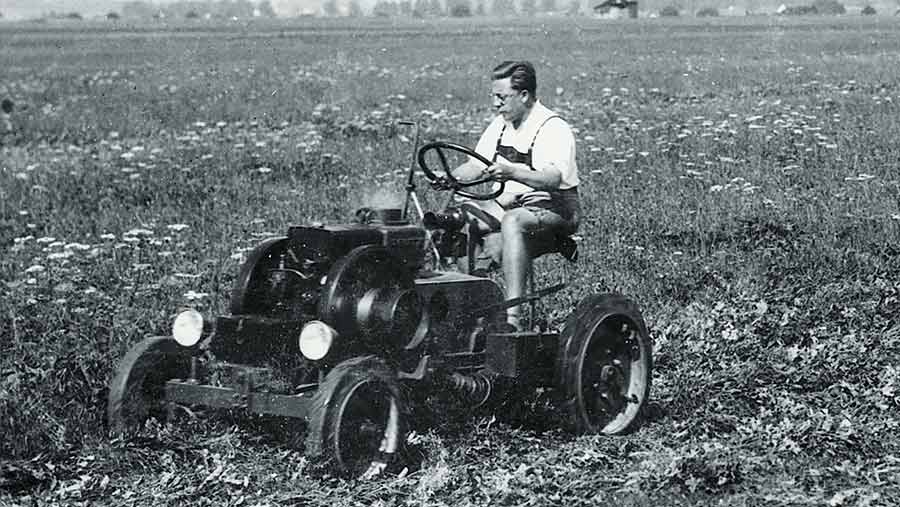 The new tractor was called the Dieselross (meaning “diesel horse” in German), the name used on Fendt’s tractors for almost 30 years.

Further design improvements introduced during 1932 included front-axle suspension – an advanced feature at the time – and the 6hp model was replaced by a pokier 9hp version.

In 1936, with tractor sales increasing rapidly, the three Fendt brothers opened a factory with an assembly line.

In the following year, they unveiled the new 16hp Dieselross F18 tractor, powered by a single-cylinder engine with a maximum output of 18hp. The F18 was Europe’s first tractor with an independent pto that could be engaged on the move. 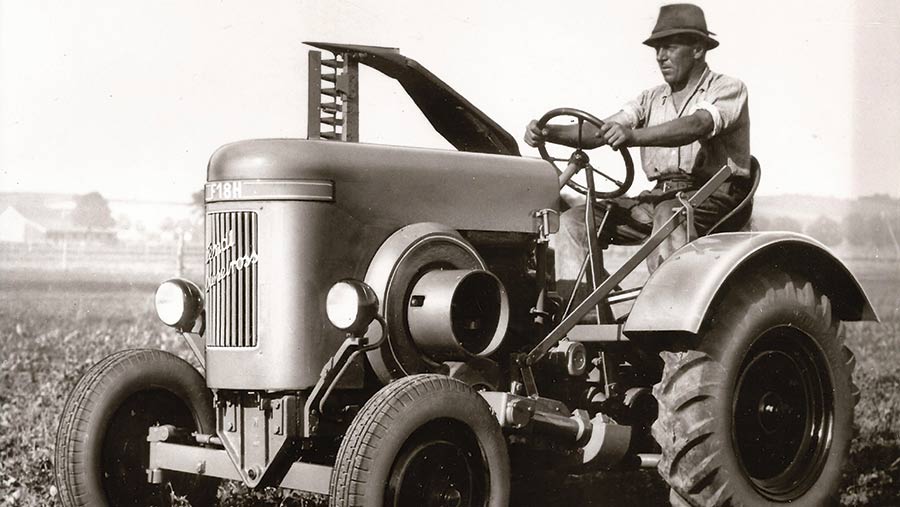 The war years were a difficult time for the company. With 71 employees in 1940, Fendt was Germany’s second-largest tractor manufacturer, but tractor production was largely replaced by military contracts.

Germany also faced serious fuel shortages, leading to regulations on fuel use, so all new tractors built from 1942 had to be run on gas produced by heating wood.

The gas could replace petrol or paraffin to fuel a spark-ignition engine and the law forced all manufacturers to equip new tractors with a large wood-fuelled gas generator and an engine modified to burn gas.

Fuelling a tractor with homegrown firewood might sound tempting, but there were problems and the idea was unpopular.

Power losses compared with paraffin or diesel were probably 15-20% and the gas generator had to be filled with a fresh supply of small wood blocks every two to three hours.

There was also a delay following each refuelling stop while the generator reached gas-production temperature. 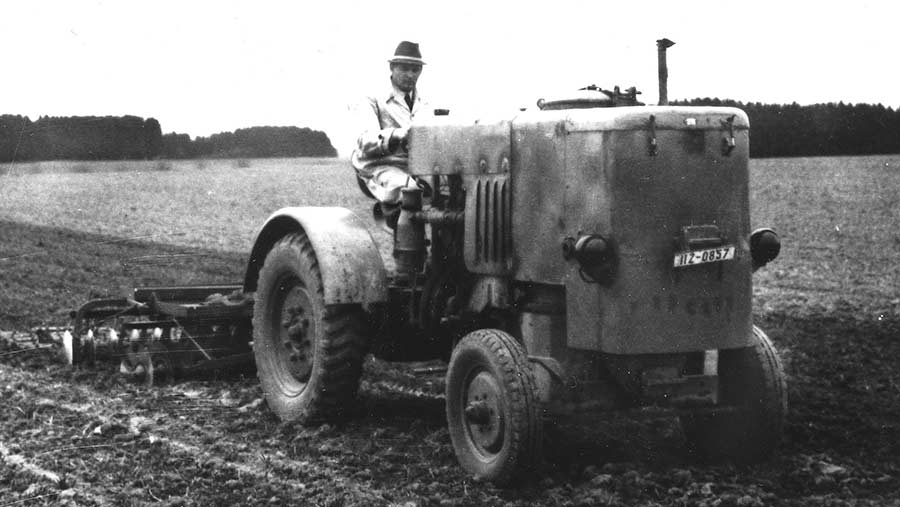 About 1,400 of Fendt’s 25hp wood-fuelled tractors were built in three years, but most were converted to burn paraffin or petrol after 1945. Tractor enthusiasts now prize the few gas-burning survivors.

Production at the Fendt factory increased rapidly after the war and a major development came in 1953 with the launch of the 12hp F12GT tool carrier.

The F12GT was a highly versatile design, with the driver’s seat at the rear and implement attachment points at the front, middle and rear – plus a tipping load container in front of the driver. 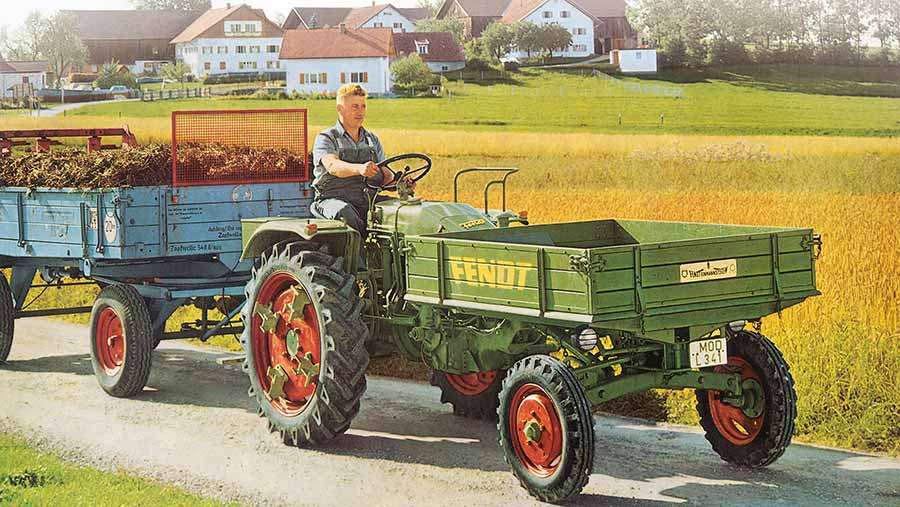 With specially designed implements, the F12GT and a rival tool carrier made by Lanz were popular on small farms in Germany and other European countries. However, they attracted little interest in the UK.

Developments during the 1950s also included the introduction of the new Farmer and Favorit series tractors.

The first in a successful series of narrow tractor models arrived in 1957. The FLS24 narrow tractor was developed for vineyards and fruit production – a sector where Fendt is still active. 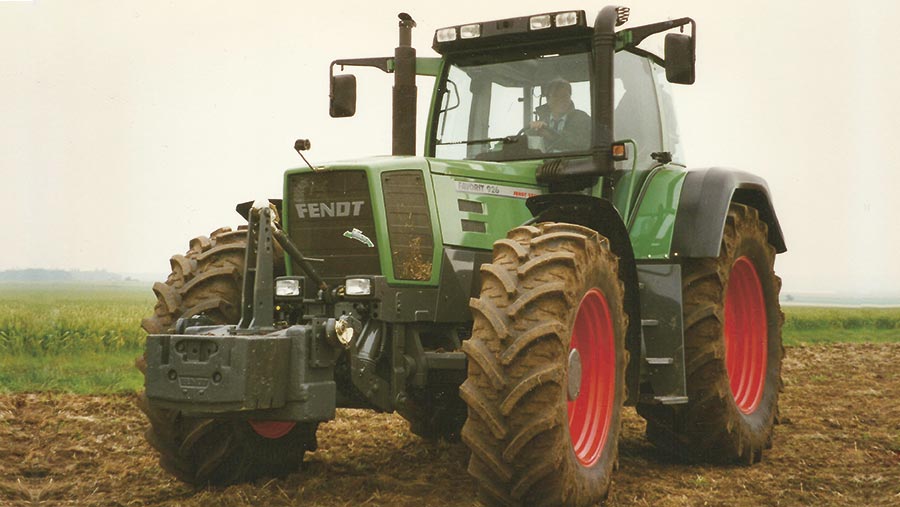 The company’s rapid expansion led to a special celebration in 1961, when total production reached 100,000 tractors.

In 1968, the Turbomatik clutch was introduced, using turbine technology for a smoother, more controlled take-up of power as it was engaged, reducing wear and shock loads on the transmission.

The clutch was one of the features that helped earn Fendt’s reputation for advanced technical design. More cutting-edge innovation arrived in 1995 with the launch of the Fendt Vario 926 tractor.

While other manufacturers – including Claas and transmission specialist ZF – brought in continuously variable transmission (CVT) developments at an advanced stage, Fendt pioneered the idea.

The 260hp Vario 926 was the world’s first production tractor to be equipped with this new drive system, which combines a hydrostatic drive with mechanical transmission.

It offers benefits from both technologies and at the time posed a major challenge to powershift supremacy in the medium- and high-horsepower tractor sectors.

The company was instrumental in extending CVT availability to smaller tractors.

Fendt’s reputation for advanced technology, enhanced by the Vario development, attracted the interest of the AGCO Corporation in the USA. Rumours of a possible takeover began circulating in 1996 and were confirmed in January 1997.

Among the early policy changes was the decision to add Fendt-branded harvesting machinery to the tractor range.

Fendt combines built at AGCO’s Dronningborg factory in the Northern Jutland region of Denmark were available from 1998, with balers and self-propelled forage harvesters following later.

Since the takeover, AGCO has maintained Fendt’s reputation for technical innovation. Recent examples include the 530hp experimental TriSix tractor, demonstrated in 2007. 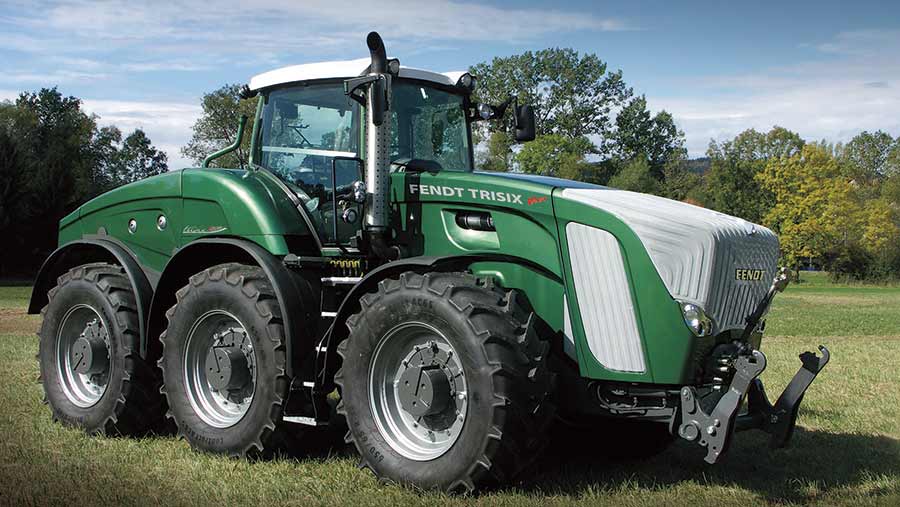 Developed to investigate high-horsepower traction efficiency, it has two Vario transmissions and an 80kph top speed.

Fendt has also experimented with remote control, with its Guideconnect system, launched in 2013, that enables one driver to control two tractors.

Production and sales increased after the ownership change, rising to 13,000-14,000 tractors per year from the typical 10,000 seen during the last years of family ownership. Export sales average about 65-70%.