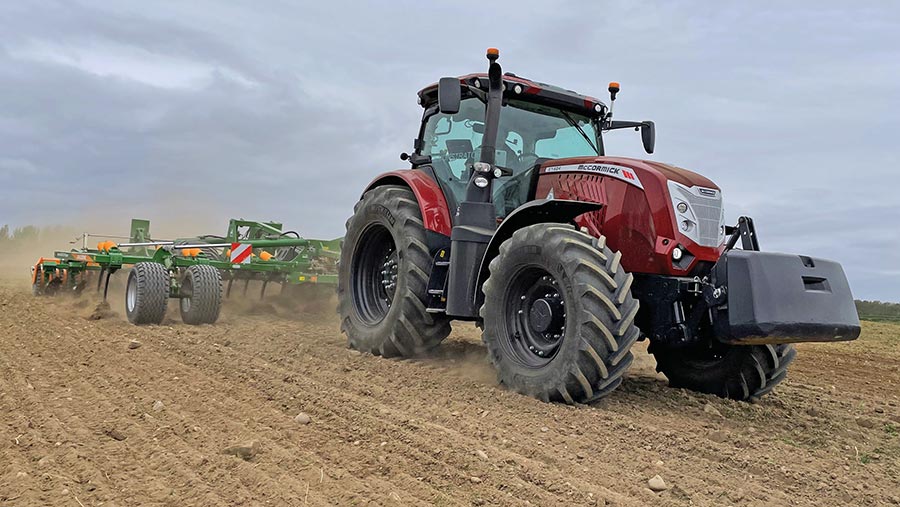 When its tractors were built in Doncaster on Case-IH underpinnings, times for McCormick were really rather rosy.

The sub-brand of Italian firm Argo Tractors – resurrected after Case-IH merged with New Holland in 1999 – quickly gathered momentum and, for a time, sat fourth in the UK tractor sales chart with a healthy 8% share of the market.

However, after the factory closed its doors in 2007 and production moved to Italy, sales gradually ebbed away to the point that its portion, at the latest official count, was less than 1%.

Now, the company says it is girding its loins for a revival, with a clutch of new models in the pipeline, an expansion of its dealer network and a target of clawing its share back up to 5%.

One of the ranges it is pinning its hopes on is the updated X7.6, which was officially launched in 2019 and has been arriving on farms since late 2020.

This uses the same basic platform as the original X7 that was introduced in 2013, but the engine has a bit more power, the styling has been tweaked and there have been a series of technology upgrades that leave it better placed to compete with the established players.

Maximum power now ranges from 180hp to 230hp, or 190hp to 240hp with boost, and there is the option of a semi-powershift transmission or a stepless CVT, both of which are built by ZF.

This engine and transmission pairing is a solid choice on paper and, with Carraro axles and Bosch hydraulics added into the mix, the X7 has a pretty respectable CV.

As a result, the firm doesn’t intend to up its market share by being ridiculously cheap. 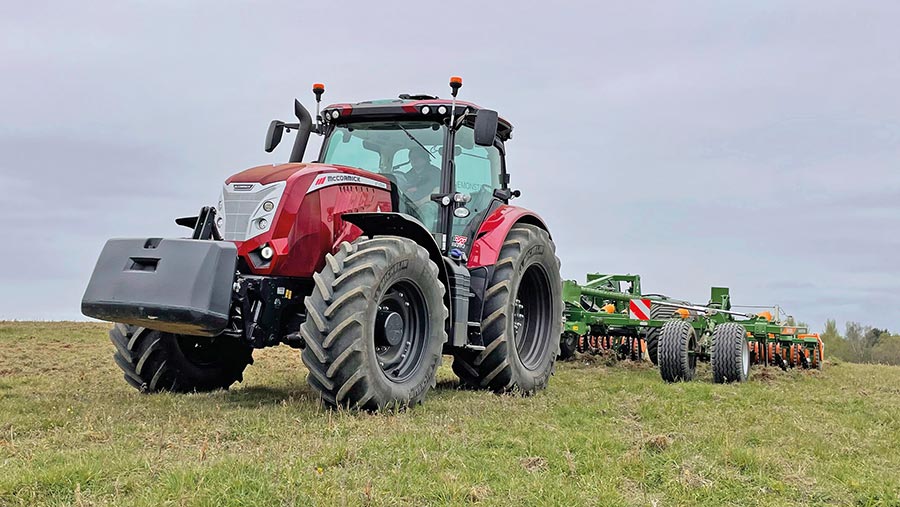 Instead, it is positioning itself alongside New Holland and Massey Ferguson and is hoping to reel in the customers with high levels of spec for the money and guaranteed cost of ownership.

To see how it measures up, we took a test drive in the top-of-the-range X7.624 VT Drive painted in the firm’s so-called Red Power livery.

This has deep-red tinwork and black wheels, rather than the standard bright red and silver combo, and McCormick’s UK arm is encouraging the factory to produce most tractors in this colour scheme.

Power throughout the range comes from the same 6.7-litre FPT engine used by New Holland and Case-IH in their T7s and Pumas. This has long been a solid performer in DLG (German Agricultural Society) tests and has a good reputation for reliability.

But unlike the version fitted in CNH tractors, there’s no structural sump. Instead, the engine secures to a cast steel chassis that harks back to the Doncaster days, with rubber mounts to reduce the amount of vibration transferred to the transmission and into the cabin.

Stage 5 emissions limits are beaten using a diesel oxidation catalyst and selective catalytic reduction system, and there is a fold-out cooling pack that gives an opening between each rad so that it is easier to blow out.

Service intervals have also been increased to 1,200 hours in a bid to reduce the amount of time it spends in the workshop. 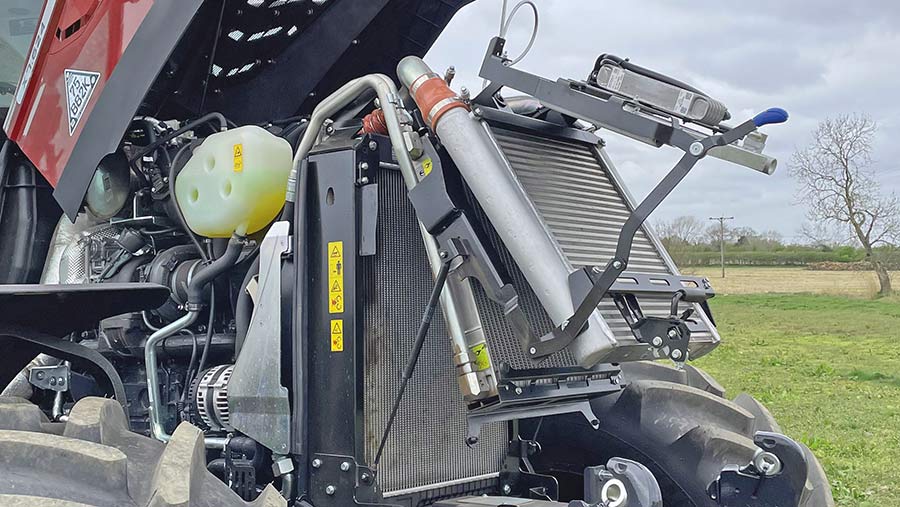 The only transmission option in the range- topping model is a ZF TMT20 stepless unit, as used by Kubota and Deutz.

This has four mechanical ranges inside, but the shifts are performed automatically, so there is no need to stop and make a change like there is in a Fendt Vario.

It drives smoothly and is pretty straightforward to use, but it does lack some of the refinement offered by rivals.

For example, the only customisation option is a simple droop dial that alters the amount of revs the engine loses before the transmission shifts to a lower ratio. There’s also no powered zero function, so as soon as the tractor is put into drive it will creep forward, unless the operator keeps their boot pressed on the brake pedal.

The setup menus in the large screen are up there with the competition, though. Drivers have the option of setting three speed ranges – which are simple to programme and toggle through using buttons on the joystick – and they can flick between driving it in stick or pedal mode without having to press any buttons.

Although best known for its simpler semi-powershift tractors, McCormick says sales of CVT models are steadily increasing and now account for about 40% of the X7.6s sold in the UK.

However, those who prefer the mechanical approach can still have a ZF-sourced semi-powershift in three models with max powers from 180hp to 215hp. This gearbox has five ranges with six clutchless shifts in each, and there’s the option to change these manually or automatically. The latter has an eco/power dial to adjust the shift point according to engine load.

Cab frames are built and trimmed by McCormick in-house and the four-pillar design has been around since the X7 was introduced in 2013.

The only recent change has been to the roof line, plus some additional mid-level LEDs – styling that will be replicated all the way down to 35hp tractor model.

It’s bright, has a reasonable amount of space for drivers and their clutter, and is fairly quiet. However, the trim is a little flimsier than you’ll find on the premium brands and McCormick is still playing catch-up on the technology front.

There have been a few significant updates though. Firstly, there is now a full headland management system that can be entered step by step and edited, rather than the old system that had to be recorded perfectly each time. 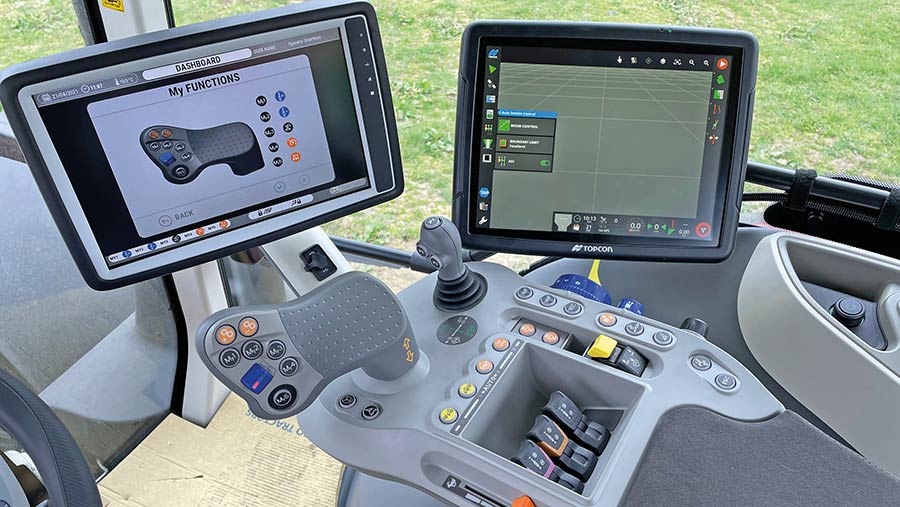 In a similar vein to Claas, the Italians have also introduced a series of customisable buttons that allow five individual functions to be set.

Some operators will no doubt find these useful, but they overcomplicate the joystick and, in many cases, it would be more convenient to set the functions in the headland management.

Other additions that bring the tractor in line with the bigger brands are a telematics fleet management system, a soft start for the pto and an adjustable speed steer system.

In general, the functions in the screen are still fairly limited and there’s currently no fancy entertainment options such as Apple Carplay or Android Auto. However, these could be on the way.

McCormick doesn’t offer its own guidance system, but one of the beauties of this approach is that customers have the freedom to choose their own.

Most UK X7s will come autosteer-ready and McCormick says it is making it as easy as it can for various guidance systems to plug straight in. This can include Greenstar using a bridging kit from Agra GPS or Solsteer.

That said, it does have a partnership with LH Agro to provide Topcon guidance and, in the next six months, it will be possible to have maps in the tractor’s own screen, which will be a major step forward. At the moment, a separate screen is required for guidance, section control and variable rate, and it will continue to be so for other brands.

McCormick sales figures might be in the doldrums, but the X7 is a decent tractor with a solid list of component parts that can rub shoulders with the more established players.

A series of upgrades in the cab mean it now ticks most of the boxes for moderately tech-savvy operators, but it is worth noting that these features feel a bit more like bolt-ons than integrated parts of the machine.

We can’t comment on reliability after such a short stint in the seat, or resale values, but the firm is giving the option of a warranty of up to five years/5,000 hours and it’s offering to guarantee trade-in values so customers have a good idea of what it’s going to cost them to run.

A sizeable UK parts warehouse and a growing list of dealers should also help reassure prospective buyers that they’ll be kept running if anything does go wrong.

McCormick says it is in the third year of a five-year plan to revitalise its business in the UK and boost sales from its current position of about 100 tractors a year.

A key part of this has been widening its dealer coverage from 50% of the country to 75-80%. There have been 12 new recent arrivals, including Mark Weatherhead in Cambrigeshire, Suffolk Agri Centre, and LQG Agri in Warwickshire.

McCormick is owned by Italian firm Agri Argo, and its sister brand, Landini, offers largely the same line-up of tractors in blue paintwork. In the UK, McCormick is the core brand for the arable sector, while Landini concentrates on smaller tractors and specialist models for orchards.