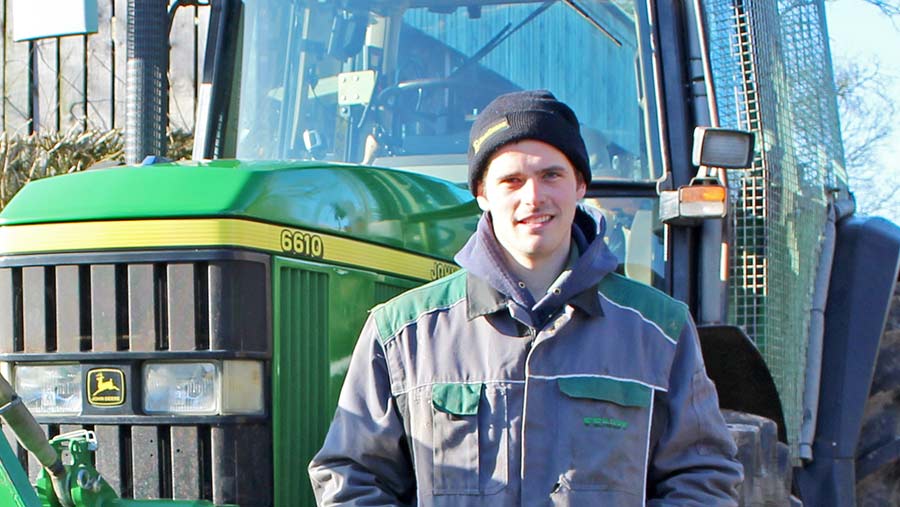 Mint condition John Deere 10-series tractors are now fetching close to their as-new price, but that hasn’t deterred one young contractor from running a high-houred 6610 on the frontline of his fledgling business. Edd Mowbray caught up with him on his Devon farm.

When Marcus Tucker spotted a stunning John Deere 6610 that became available at a local dealer, he offered everything he could lay his hands on to make sure it joined his small fleet of contracting machinery.

Alongside his 1,000 hours a year of contract farming, Mr Tucker has a metal fabrication business that builds anything from gates to grain trailers and the front weights for the 6610 parked at his Talaton, Devon base.

He tells Farmers Weekly why he picked it and what he uses it for.

Where did you buy it from?

I knew what I wanted ever since I started saving and, after biding my time and letting some less tidy examples go, this one came up for sale at local dealer Smallridge Brothers in Barnstaple.

It’s pretty much a top spec model as well. I think the only extras it doesn’t have are a sunroof and creeper box, although I fitted the front linkage in 2014 to make switching weight blocks easier and give me the option of using a swath roller when baling. 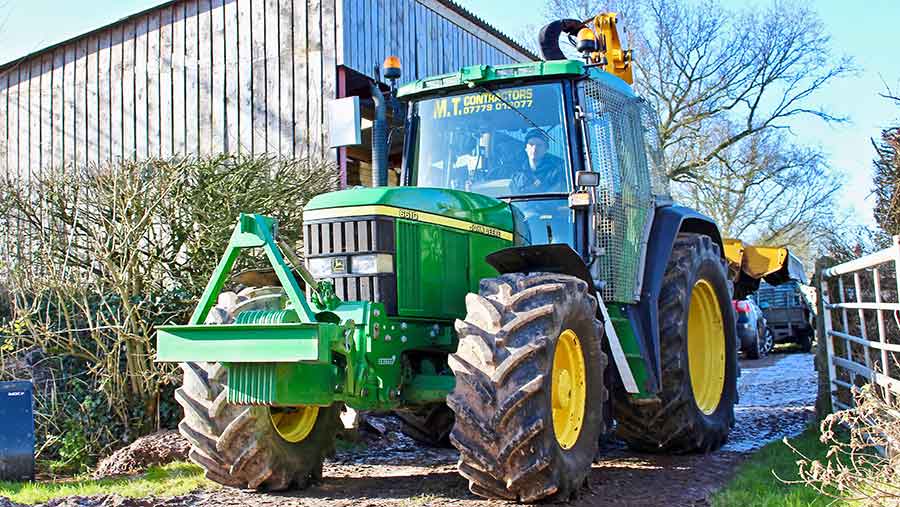 What are its main tasks?

It spends 400 hours a year hedge cutting with a McConnel 6500T, which is mounted to the axle of the tractor. I’ve also got a Pottinger rake, Vicon mower and a Kuhn baler, with which I produce around 7,000 bales per year, and do some work for a local contractor, taking annual workload to around 1,000 hours.

This has slowly crept up over the past few years as I have taken on more work. I don’t advertise so it’s just word of mouth and I work within a 10-mile radius from my base.

I charge one way travel on each job, which isn’t to everyone’s taste but I’m a small business and when the wheels are turning I need to be charging.

How well is it looked after?

Religiously – I’m a bit of a perfectionist when it comes to maintenance.

I’m the only driver so if something goes wrong or gets broken, I’ve only got myself to blame. But on the flip side, at least I know about it straight away and it will get fixed immediately.

If you start to let the little things get away, the list grows and becomes unmanageable.

I blow out the radiators and cab every evening when I come home and give all the main points a squirt of grease. It usually gets cleaned around once a week.

Engine oil is dropped out every 250 hours along with the front hubs, while the back end, filters and front axle oil is changed every 1,000 hours.

Running old kit means I have to be on top of my servicing regime and it has just had a new set of boots, too.

The reason I went for this series of tractor is its simplicity. It means I can fix almost anything on it without the help of a laptop or mechanic costing extra.

I could sell this and buy a newer model, but my reliance on others would be greater.

Is the cab starting to show its age?

The cab is kept pretty clean and everything has its place. I don’t wear work boots in the cab as I have a carpet in there, which does mean I’m quite particular about footwear.

I had to replace the seat a few years ago as the previous 11,000 hours had taken their toll.

I spotted a brand new genuine John Deere seat on eBay from a dealer who was having a clear-out. I snapped it up for £750 and it came with the whole assembly. 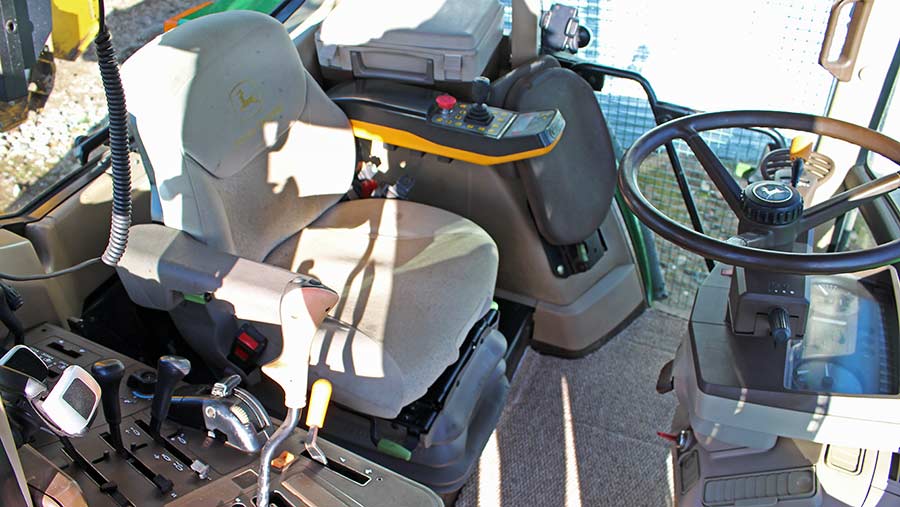 Have you done much to it?

I’ve made covers for the diesel tank and bonnet when hedge cutting. I learnt the hard way when a piece of wire speared a hole in the side of the tank in my early days and I ended up needing a replacement tank.

I’ve wired in a Greenstar screen to give me a light bar to keep my lines straight, too. The main benefit is it records field sizes so I can charge customers exactly for the work I’ve done.

Older tractors of this size lack tool storage and, as I like my cab to be clean, I’d rather not have tools and flails rattling around my feet.

I bought a Stanley toolbox and welded a sliding bracket behind the front wheel under the exhaust stack. I can store all the tools here and it tucks away when I don’t need it.

The wheels get a refurb every couple of years as you don’t realise how much a yellow wheel loses its shine until you give it a fresh coat, especially after a lot of hedge cutting. 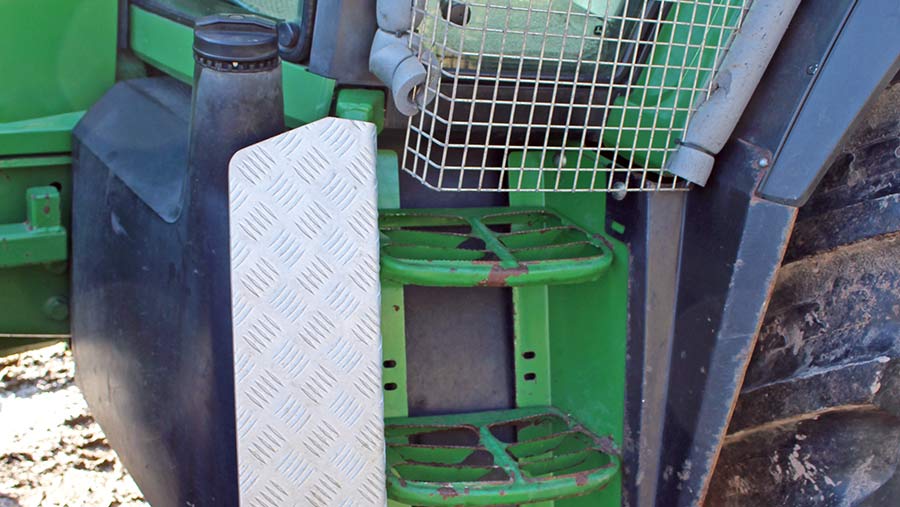 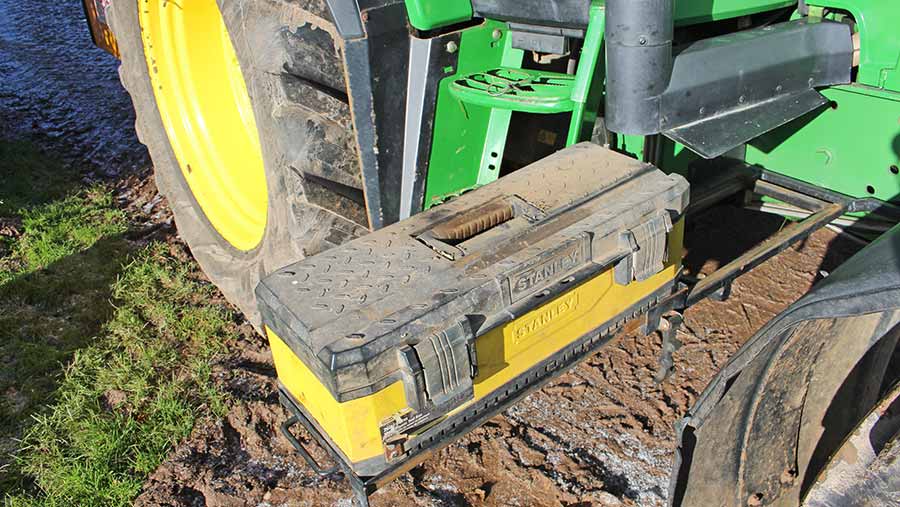 I’ve had a few little niggles, but nothing major. The injector pump went soon after I got it and luckily it was fixed under warranty.

There was also a crack in the rear spool block that I had to get sorted, but these have been the only two mechanical issues.

I replaced both rear mudguards as the outside metal had started to rust through. The new ones are half plastic but look identical, so they should last longer.

I’m starting to notice a slight drag in the gearbox from start-up, which means I have to select reverse first and roll back a couple of inches before I get the forward gear I want.

It only usually happens when it’s cold but it is a problem that wasn’t there when I bought it.

My view is that I don’t pay hire charges or monthly payment plans so if a big repair is needed then I’ll pay it, as it’s the trade-off with running older kit.

Will you ever sell it?

No. It’s a tractor that I’ll keep forever and will probably carry me to my funeral. I’ve been offered double what I paid for it, I’ve even had a written cheque put into my hand but I have refused every time.

For me it’s more than a tractor as it’s been the machine that has allowed my business to expand and take on more work.

My dream second tractor would be a John Deere 7810 in similar condition and spec but these are becoming much rarer and every time a good example comes up at a dealer, they are snapped up instantly. 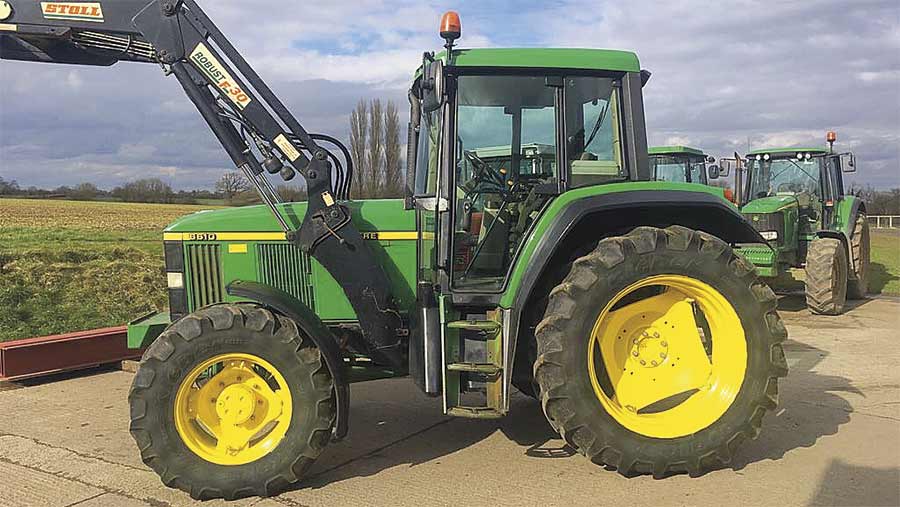