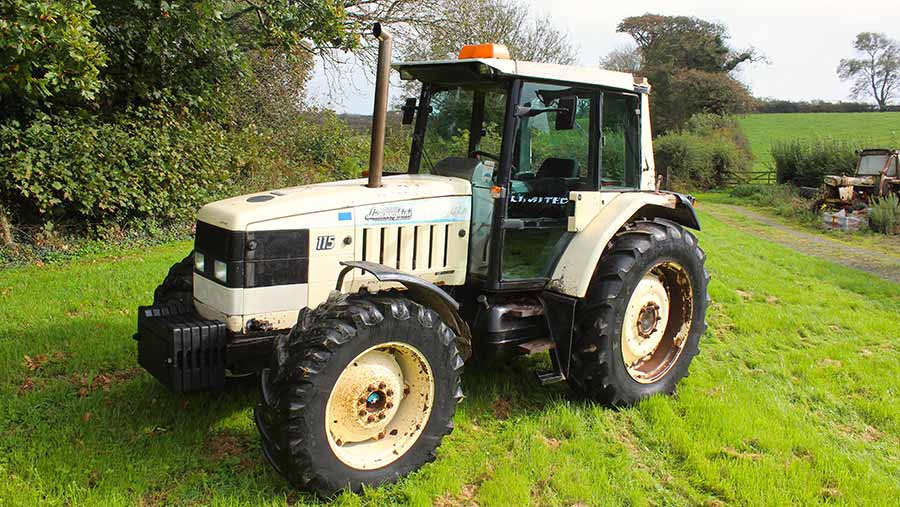 Clive Dayment’s Lamborghini 115 is a famous face across the hills of south Devon, having clocked almost all of its 18,000 hours as part of a small-scale contracting operation.

His love affair with the Lamborghini brand started in 1989, when he began selling the Italian tractors in Totnes on the Devon coast.

Although it wasn’t a big name, the “white Zetors” proved surprisingly popular across the West Country and, at its peak, Dayment and Skelton was shifting up to 20 a year.

One of the company’s first demonstrators was a top-spec Formula 115, which arrived in September 1990 and ran for three months before joining a contracting operation run by Mr Dayment’s father.

There it worked alongside a Same Centurion, pulling a trailed JF FC80 forager during the silage season and on cultivations and fertiliser spreading duty for the rest of the year.

“The biggest feather in its bow is the low centre of gravity, which made the tractors particularly popular on the hilly ground of south Devon,” says Mr Dayment.

“Some of the fields that were covered by my father’s Lambo are now out of production because they’re too steep for most of the other contractors.”

“Most of that is because the engine sits so deep in the chassis that the rocker cover is only chest high, and we had to lengthen the breather pipes because diesel and oil had a habit of pouring out on the steepest ground.”

Mr Dayment’s 115 was one of the first to carry the Hurlimann engine (the Swiss brand that is also part of the SDF stable) – a move that heralded the switch from Lamborghini 916cc/cylinder air-cooled block to the 1,000cc/cylinder water-cooled version. 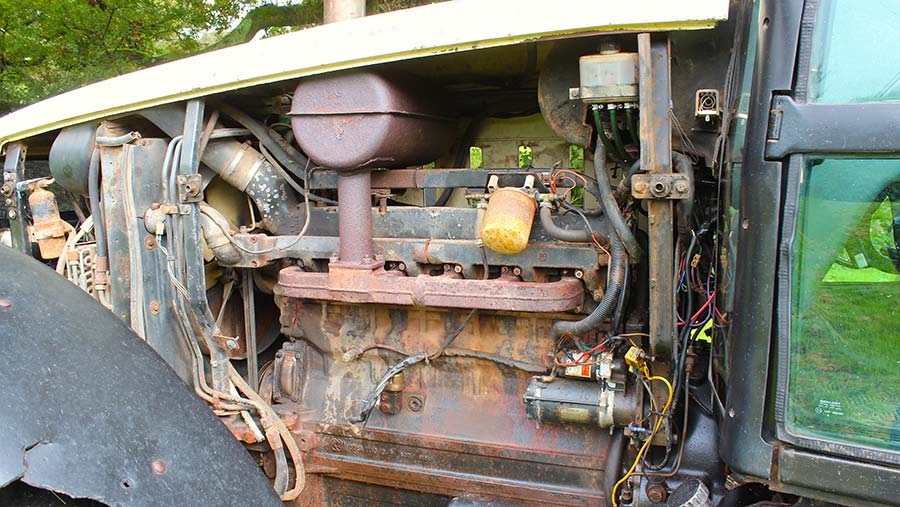 Six cylinders, each with a one-litre capacity, made for a deep bellow and loads of low-rev torque, but the machines also had a habit of suffering from porous liners. To try to reduce the likelihood of water invading the sump, the company fitted a water-conditioning filter, which treated the coolant to keep it soft.

“We’ve managed to run our 115 for 26 years on the original crankshaft and main bearings, but both the liners and con rod shells have been replaced at around 8,000 and 14,000 hours, which is par for the course,” says Mr Dayment.

It was also fitted with the more sophisticated transmission – a 36-speed, 40kph gearbox with three ranges, six speeds and an electro-hydraulic high/low splitter offering a 17% reduction in each gear.

The spec was pretty generous for its day, with items such as wheel slip controlled by radar, and a performance monitor to show engine revs, pto speed, area worked and a digital counter to keep tabs on silage loads or fields bouts.

Side console controls are very similar to those on Massey Ferguson tractors of the late 1980s/early 1990s and were the result of a tie-up between Dickey John and Bosch. 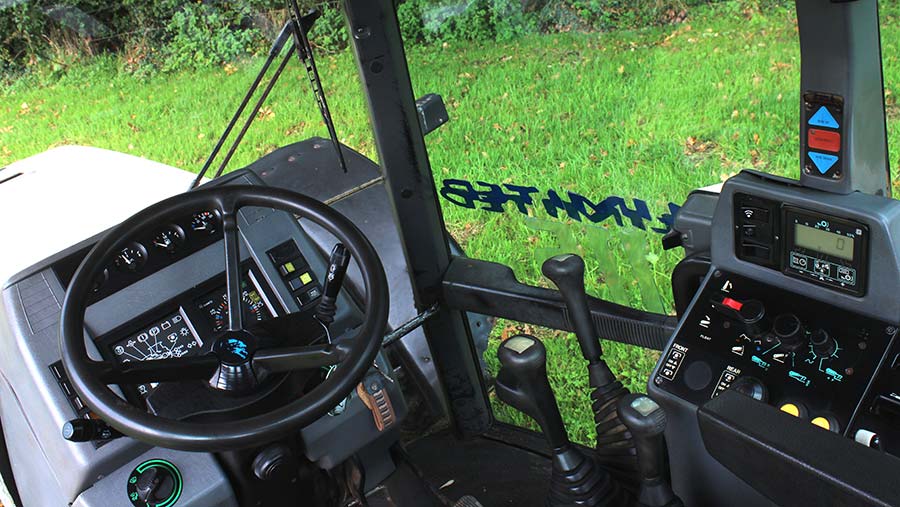 SBA-badged models also came with auto engagement and disengagement of the diff-lock and four-wheel drive based on pre-set steering angles and speeds.

Other perks include two engine speed memories on the B-pillar, electronic rear linkage sensing, three spools (one double-acting, two that can be set to single- or double-acting with the twist of a screw) and a Dromone pick-up hitch that has been converted from cable release to hydraulic control.

Keeping an old-timer running often comes down to a decent supply of spares – something Mr Dayment’s company has covered.

“Lamborghini spares were kept at SDFs base in Barby, Northamptonshire, but when the company was restructured in the UK in 2005 the remaining parts were put out for tender, which we won. In the end, we got two lorry loads of spares, which we keep here in Devon.” 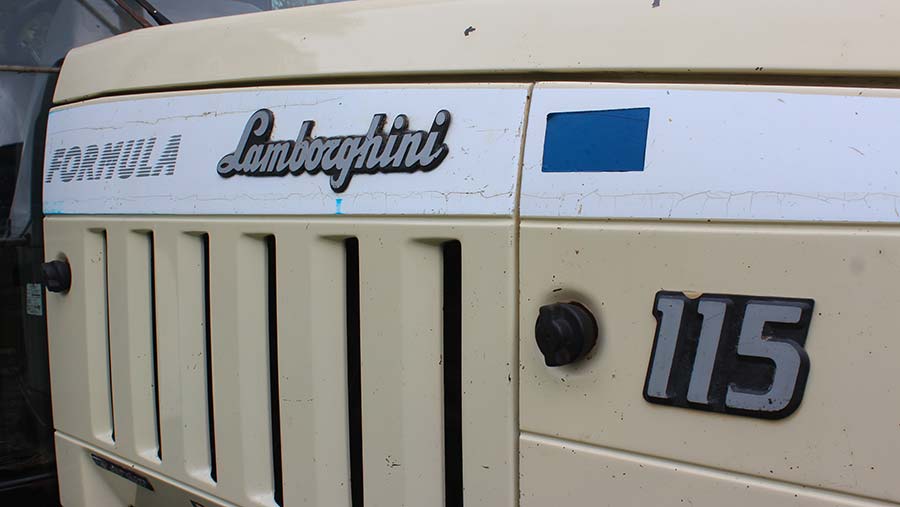 “The stash has helped keep the old 115 going – along with other vintage Lambos in the area – but most of the main parts have now been used.

We’ve been left with quite a bit of trim, clips, seals and bearing, so bigger bits will have to be shipped over from Italy in the future.”

The most recent work was to the gearbox. The selector forks had thinned to almost nothing after years of rattling around, so were replaced along with the multi-speed clutchpacks, the forward and reverse synchro and a couple of shaft gears.

It was a job with a retail cost of well over £2,000, but Mr Dayment’s supply of parts helped keep that to a minimum.

Unsurprisingly, the tin work is also beginning to show its age.

“Italian metal has always had a poor reputation, but Lambo laid on stacks of layers of paint to try to sort the problem. Where it’s double skinned it’s actually the inside layer that has rusted, particularly on the side that the hedgecutter hangs.”

High-hour horsepower – can you beat them?

The stories we run in Farmers Weekly’s Machinery section rely on readers getting in touch and we’re always looking for tractors to feature in our High-Hour Horsepower series, so if you have a workhorse that is long in the tooth but still kept busy on the farm, please get in touch.

All you have to do is send an email to oliver.mark@markallengroup.com with a picture of the machine and some information about what it’s used for.

Here are three of the other old-timers we’ve featured over the past couple of years.