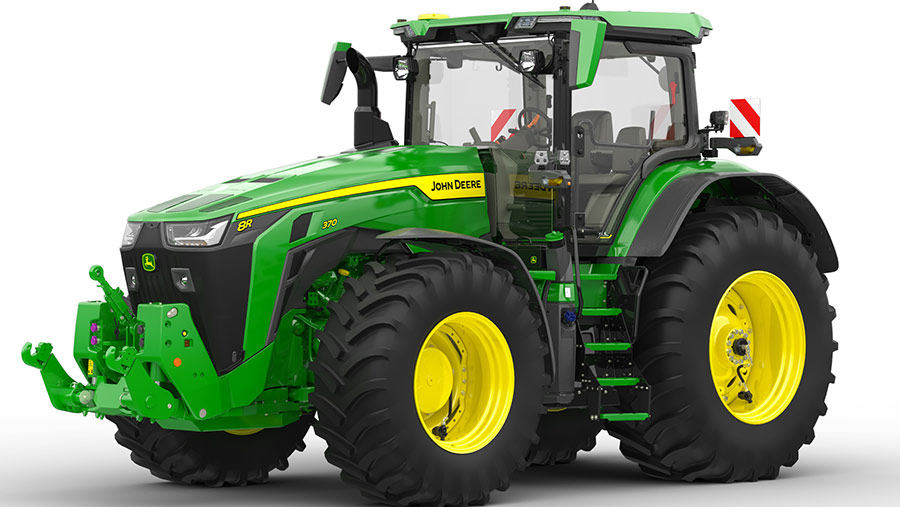 John Deere has joined arch rival Fendt in offering its high-horsepower tractors with an integrated central tyre inflation system that can adjust pressures on the move.

The CTIS is available as an ex-factory option on the firm’s 308-443hp 8R series machines and, like Fendt’s Vario Grip setup, pressures can be monitored and altered from the cab.

Deere has introduced the system to cater for customers who want to make the most of their tyres by running them at the optimum pressure both in the field and on the road.

At the heart of the inflation system is an on-board compressor that feeds pressurised air to the tyres via pipework that’s routed through the axles.

This reduces the risks of snagging that can befall some retrofit options. Hoses that exit the hubs and run to the rim have strong reinforced fabric sleeving, but there are no metal guards like Fendt uses on its system.

For faster inflation and deflation times, Deere has opted to use pipework with a 33% larger internal diameter than some of its rivals.

This means that the internal pressure of a large tyre combination (710/75R42s with 650/60R34s) can be increased from 0.8bar to 1.8bar in less than six-and-a-half minutes, while less than four minutes is needed to release the pressure.

An external compressed air connection allows even faster inflation, by taking air from machines with an integrated compressor, such as a slurry tank.

It is also possible to connect an air gun for cleaning purposes, if required.

Operators control and monitor the system from the tractor’s Command Center in-cab display and target pressures for field and road can be reached at the press of a button.

In addition to CTIS, Deere is offering a wider choice of VF (very high flexion) tyre options that allow operators to work with the lowest tyre pressures even when using high ballasting weights.