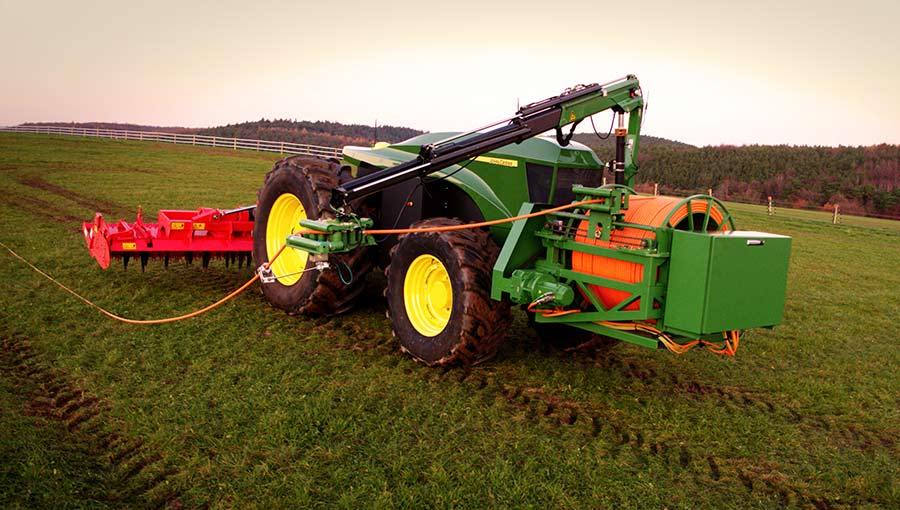 John Deere has developed an electric tractor that drags a power cable up and down the field, developing up to 400hp.

The GridCON project is the next stage of Deere’s electric tractor programme and looks very different to its 2016 attempt known as the Sesam (sustainable energy supply for agricultural machinery), which was a standard tractor with batteries instead of an engine.

See also: Is electric about to kill off diesel tractors?

For starters, there is no cab on the new design – echoing previous autonomous tractor attempts by Case-IH – and is based on Deere’s 6210R platform. There aren’t banks of batteries under the bonnet as power is permanently fed by the cable transferring power continuously at 300kW.

Fixed on the nose of the tractor is a 1,000m cable drum that is fed out and reeled in by a robot arm. This is controlled by an intelligent guidance system to keep the powerful cable free from contact with tractor or implement.

In work, the tractor follows pre-set rows autonomously at speeds of around 12mph (20kph), while there is a manual function via remote control to move it into position.

A power supply of 2.5kV AC is required, and the GridCON tractor uses a 700V DC bus convertor module for electric power distribution both onboard and for implements, with drivetrain efficiency near 85%, we’re told.

Total empty weight of the working prototype GridCON tractor including cable drum and robot arm is about 8.5t, which is similar to a John Deere 6195R tractor but with twice as much power.

Research engineers are aiming to reduce the weight by at least a further 1t. Being silent and emission-free are further advantages.