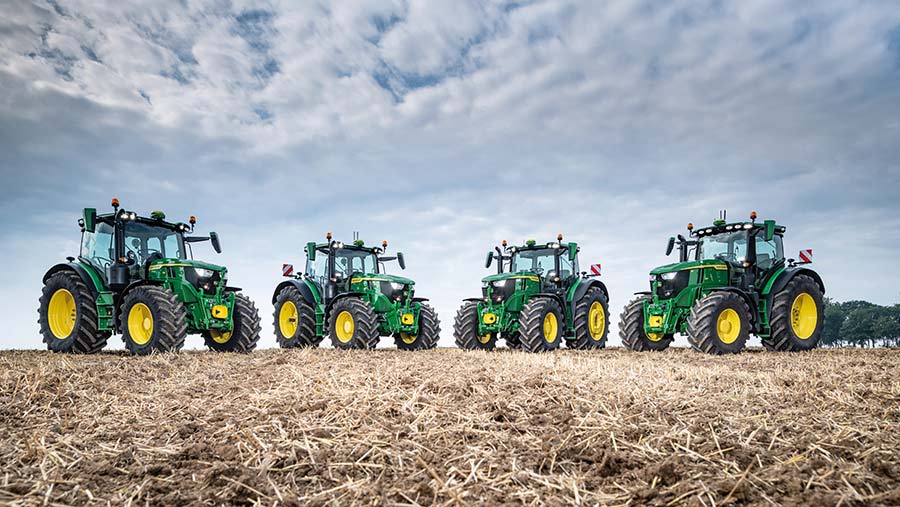 John Deere has announced a host of upgrades for its best-selling 6R tractor range and introduced four higher-powered models in its smaller chassis sizes.

These include a four-cylinder tractor that delivers 177hp with boost and a compact six-cylinder model that tops out at 234hp.

The most obvious update across the line-up is the styling. This has gradually been filtering down from the firm’s larger models and includes a new bonnet with modified side vents, angular mirrors with body-coloured panels and a more sculpted roof with bug-eye light clusters.

Inside the cab, the conventional dash has been jettisoned in favour of a pillar-mounted digital display, now common fitment from the 6M to 9RX, and there’s a new E-joystick for the loader.

This has an integrated shuttle function, touch-sensitive hand detection and the ability to programme buttons to carry out different tasks.

Other loader features include return-to-position and auto-levelling systems, as well as an integrated bucket weigher that automatically records how much is being carried in each load. 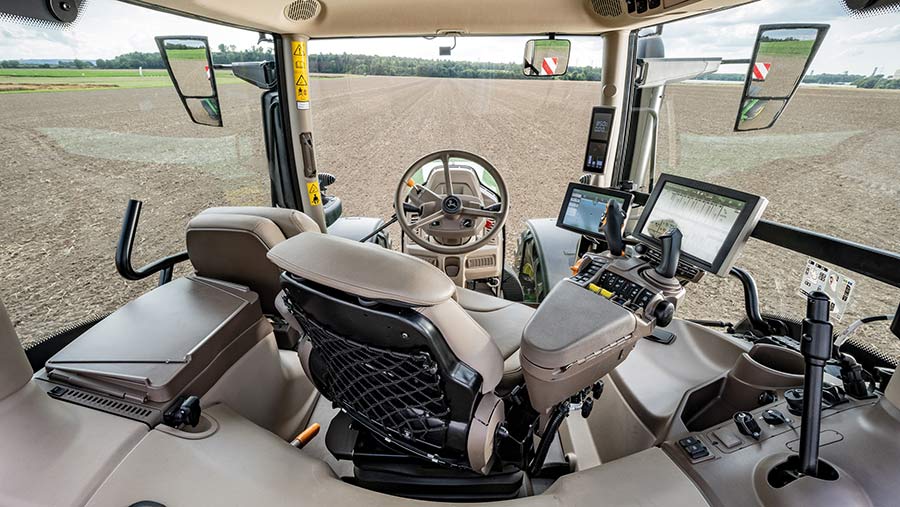 All 6R tractors come with the firm’s IPM boost function, which used to kick in purely for pto and transport work. However, it now has an additional feature that delivers boost when the hydraulics are activated – 20hp on four-cylinder tractors and 40hp on six-cylinders. It comes as standard on some models, but all have the option of adding it.

A change to the naming convention also puts the 6Rs in line with their larger siblings by separating the range designation and the horsepower. For example, the 6250R becomes the 6R 250.

This puts it in line with some of the most powerful four-pots on the market, although it can’t match the headline 201hp boost figure that Valtra quotes for its N175.

Buyers can also upgrade the hydraulic pump from a previous maximum of 114 litres/min to 155 litres/min. 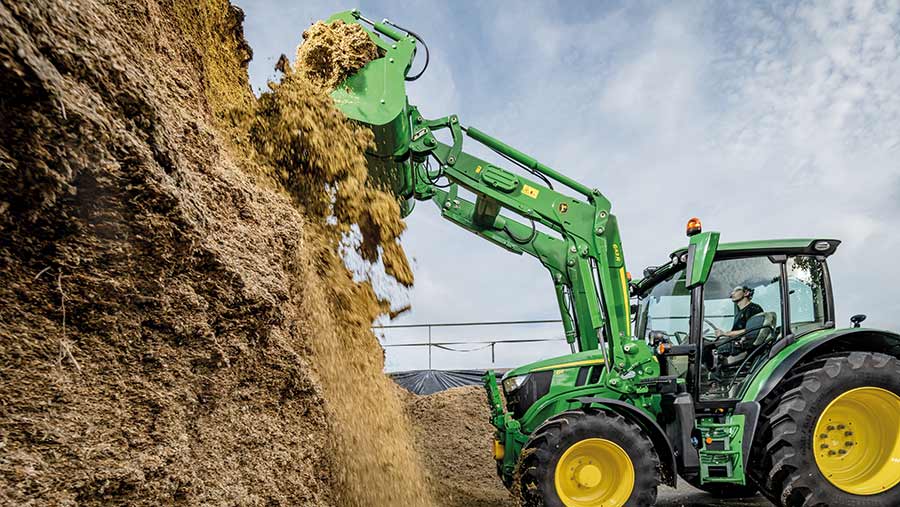 Transmissions have changed on four-cylinder models too. Gone is the most basic PowrQuad box, leaving the AutoQuad semi-powershift, Autopowr CVT and a robotised mechanical transmission called the CommandQuad.

This allows the tractor to shift through gears and ranges automatically without needing to depress the clutch.

It includes an auto-clutch function that means the tractor can start and stop on the brake pedal. Both 40kph and 50kph versions are available.

The reshuffle also sees the 6135R superseded by a new 6R 140, which gets a higher max power of 154hp, but the same boosted figure.

These new tractors should avoid the need for some customers to jump up a chassis size. 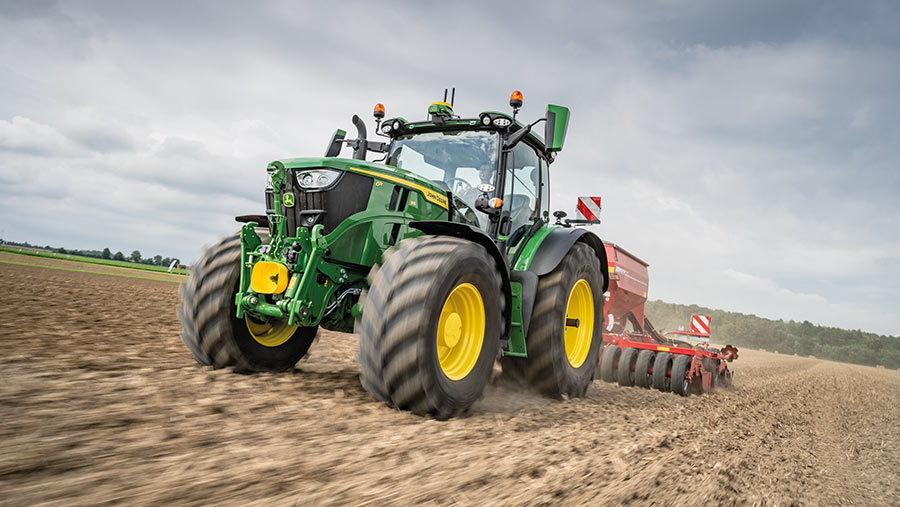 On the technology front, Deere has introduced its 1-Click-Go AutoSetup system, which allows tasks to be set up in advance and sent to the tractor, ready for activation.

Operators or managers can plan the work using Deere’s operations centre – accessed via a web app or smartphone – before sending it to the tractor via JD Link.

Once the driver enters the field in question, the GPS system will automatically load the task that needs to be completed. They then press a button to confirm it, at which point all of the settings will be automatically applied.

*The firm has also announced it will be introducing a new GPS receiver in late 2022, expected to be called Starfire 7000, which offers better signal stability, particularly in shaded areas. 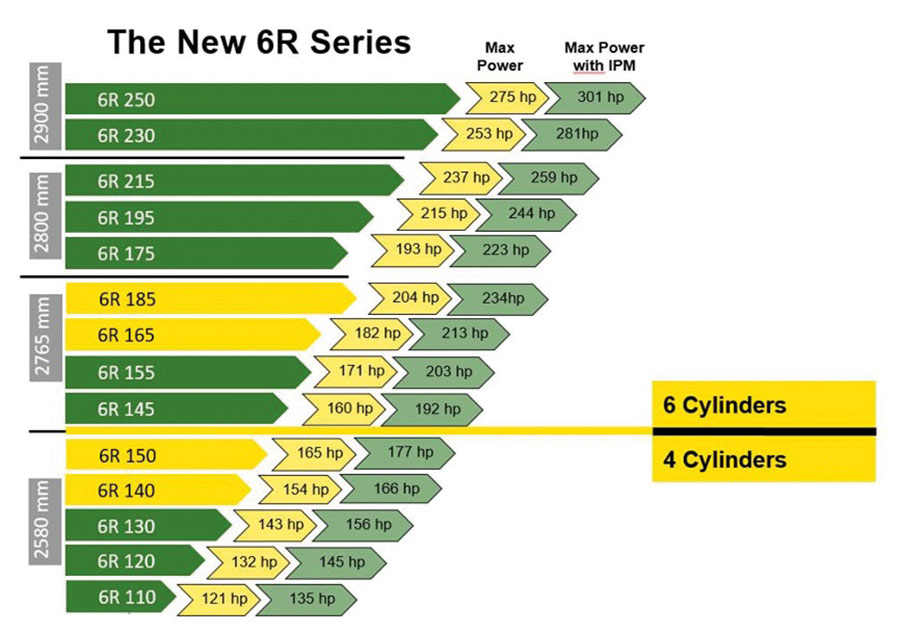