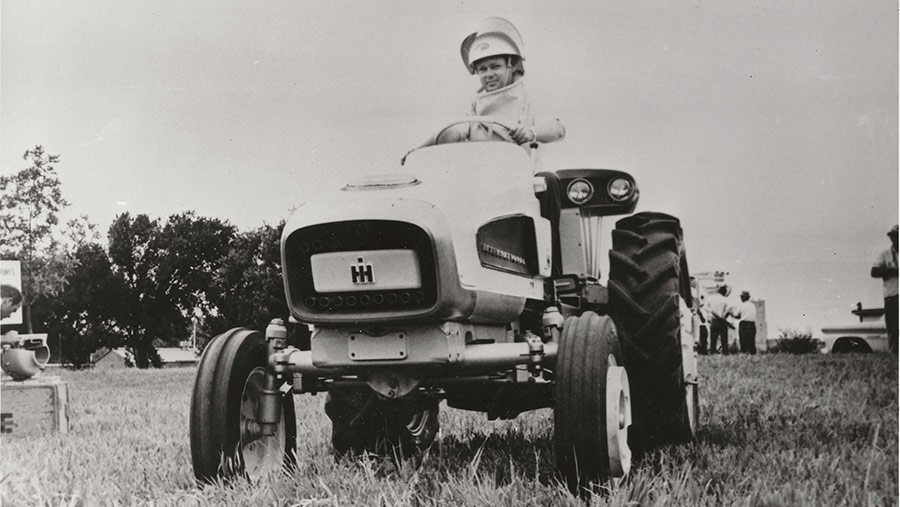 There have been plenty of attempts to predict future developments in farm tractor design, but most of the ambitious and unorthodox ideas have, so far, failed to emerge.

Several of the design projects were aimed at assessing tractor requirements for future farming generations but, to attract maximum publicity, they often carried exotic exterior styling and some very attractive interior spec additions.

The eye-catching appearance of International Harvester HT-340 tractor stimulated plenty of interest when it was shown in the US in 1961, but there was an additional reason for the streamlined shape.

The styling helped to draw attention to the fact that the body panels were made of fibreglass. This offered corrosion resistance and built-in colour to avoid the need for a respray, and was relatively easy to repair after a minor mishap.

In spite of its prominence on the HT-340, sheet steel remains the standard material for the main bodywork on tractors, with synthetic products used for parts such as mudguards and engine compartment covers.

An International Harvester (IH) subsidiary company had recently diversified into gas turbine engine production, with one 80hp example designed to power a helicopter.

A version of the engine featured in the HT-340, and was one of the reasons the company built the tractor.

This type of power unit was making headlines after the Rover company in Britain had demonstrated the world’s first experimental gas-turbine-powered car, perhaps prompting IH to evaluate a similar power unit for tractors.

If so, the results were probably disappointing. Gas turbine efficiency needs constant operating speed and power output in situations such as long-haul aircraft flights, and the engines are less suitable for the varying loads associated with tractor work.

Noise is also a problem in vehicles, and it is probably significant that the HT-340 driver in the photograph appears to be wearing ear defenders at a time when these were rarely used on farms.

A more positive development on the HT-340 was the use of a hydrostatic transmission when this type of drive system was almost unknown on farm equipment.

This appears to have been a success because, soon afterwards, IH became the first major company to introduce hydrostatic drive on a production tractor.

Kitchen area for the Typhoon II

In the early 1960s, when designers at the Ford Motor Company tractor plant in the US were asked for their ideas about future developments, the replies showed a big emphasis on improved driver comfort and convenience.

This result was probably influenced by the fact that driver welfare had become a major issue on farms after 1959, when Sweden became the first country with legislation requiring new tractors to be fitted with safety cabs – the UK followed belatedly in 1970.

Results of the Ford design survey were used to build the Typhoon II tractor, completed in 1965, as a slightly less than half-sized model which became a star attraction at the Smithfield Show in London. 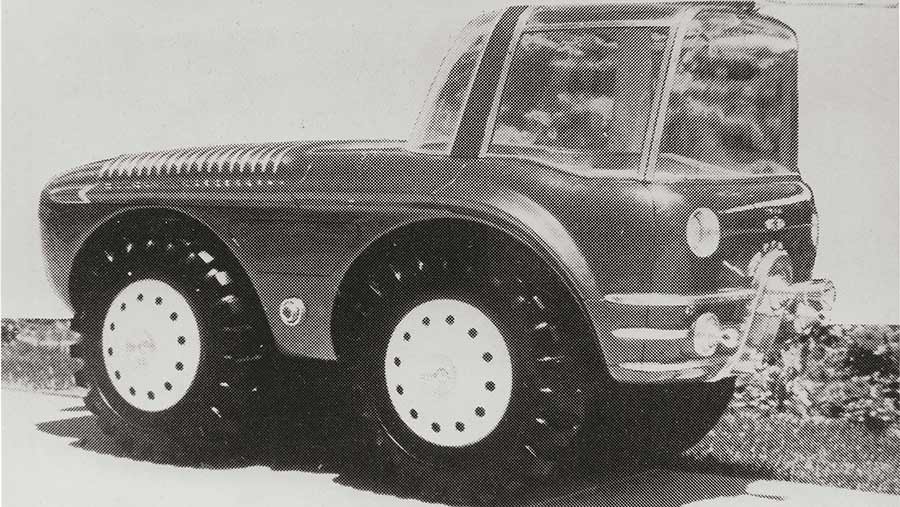 Driver-friendly features on the Typhoon II included a layout placing the engine at the rear and the cab at the front to improve forward visibility and control, and Smithfield Show visitors would have been impressed by the lavish equipment list.

This included a swivelling seat that also tilted to keep the driver upright on side slopes, and a “kitchen area” behind the seat featured a cool box, food warmer, coffee maker and a hand-wash unit.

Under-floor heating coils warmed the driver’s feet on a cold day, and his hands were free to manage the controls because the steering was operated by foot pedals instead of a wheel or levers.

Perhaps the most futuristic feature was built-in equipment to provide the driver with constantly updated local weather forecasting.

The Typhoon II also included a hydraulically operated raise-and-lower feature to vary the ground clearance, and ptos were provided at both sides as well as front and rear.

To compensate for the poor rear visibility from the front-mounted cab, a 3D external TV camera linked to a screen allowed the driver to monitor equipment behind the tractor.

External TV cameras were also included on the Talent 25 tractor shown by Kubota at the 1970 World Fair in Tokyo, with a screen in the cab giving external views to both sides and the rear. 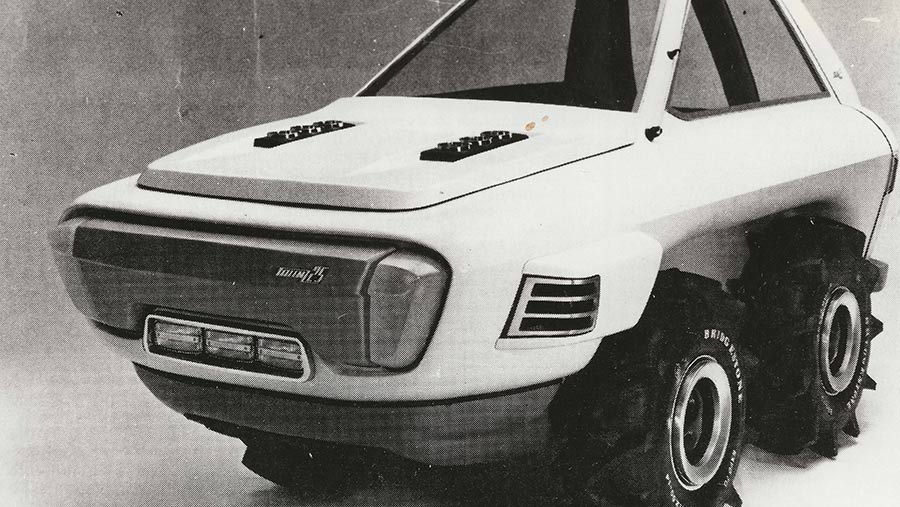 At that time, Kubota was achieving an international reputation as a specialist manufacturer of compact tractors, and the 25hp Talent hinted at exciting future developments in this sector of the market.

The design included a reversible seat and controls, soon offered on some Kubota production tractors. The cab had no side access, with entry or exit through doors at the back – even the most agile drivers may have found this difficult with a rear-mounted implement attached.

While leading tractor companies had an obvious incentive to investigate future design ideas, there were other organisations with a similar long-term interest.

These included United States Steel (USS) which supplied a wide range of types and grades of steel to large-scale US manufacturers, including tractor companies.

In 1970, USS published details of its Vantage tractor project, designed to “motivate the creation of more advanced agricultural equipment designs”. 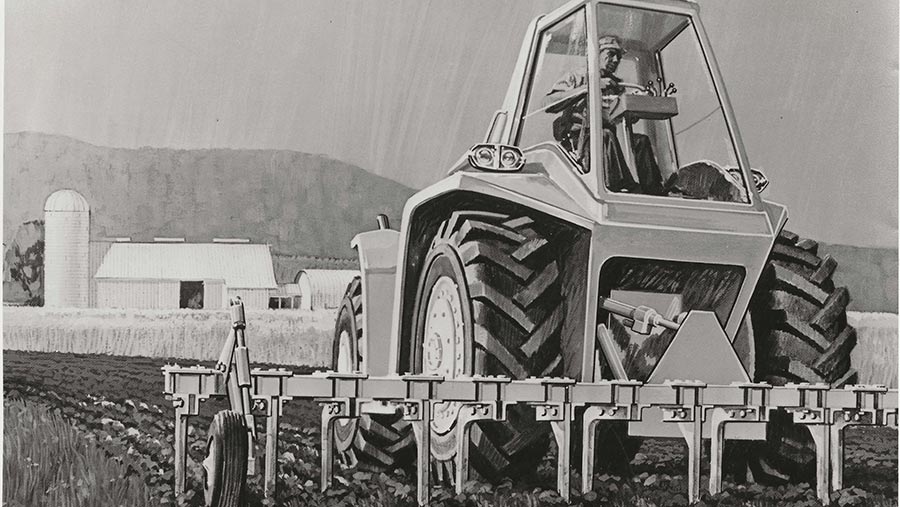 Vantage was never built, but it was planned in great detail and widely publicised – power was to come from a 225hp V8 diesel engine, which USS correctly predicted would become an increasingly popular tractor size on US farms during the 1980s.

The engine was mid-mounted, with the power delivered through a hydrostatic transmission providing four forward ranges and a reverse. Four-wheel drive came via equal diameter wheels, plus it had front-wheel, rear-wheel, four-wheel and crab steering modes.

The Vantage project also included designs for more than 25 special implements and attachments to work with the tractor.

These extended to front-mounted, rear-mounted and wrap-around machines using power available from ptos located at the rear and one side. The latter could be used to power front-mounted equipment.

Triangular attachment points were used instead of the standard three-point linkage, and one design feature that Vantage is said to have pioneered is providing external controls to simplify the coupling of linkage mounted equipment.

Bedfordshire based Silsoe Research Institute – previously called the National Institute of Agricultural Engineering (NIAE) – closed in 2005 when its government funding ended, but one of the most ambitious projects in its long history was the experimental farm transport vehicle.

This was based on a research programme that started in 1973, with surveys showing that transport had become a major part of the workload for tractors on farms in the UK and Germany, and that a substantial number of farms could benefit from a tractor designed with transport efficiency as the top priority.

Construction work on the research vehicle began at the NIAE’s vehicle and cultivations division in 1980, with the test programme kicking off in 1983. 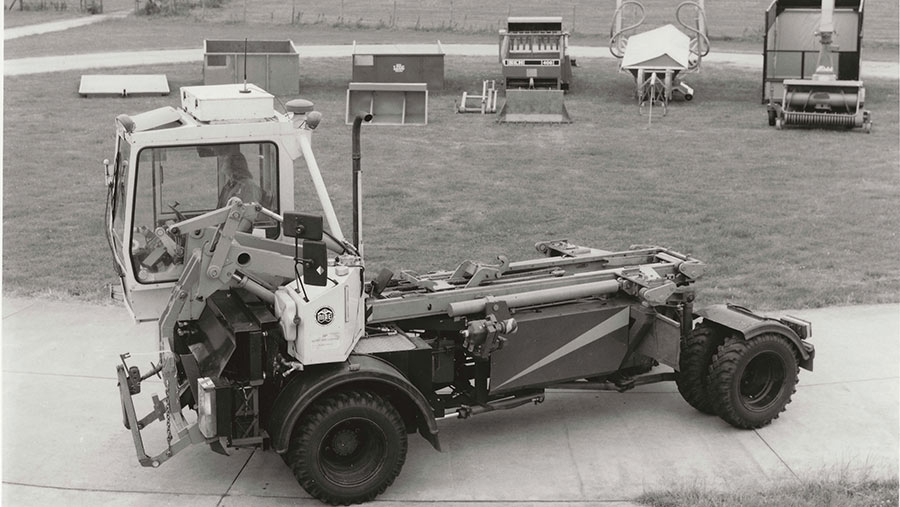 The engine chosen for the transport tractor was a 104hp Perkins, which was later uprated to 126hp, and the tractor was based on a chassis with a front-mounted cab leaving a large area for carrying specially designed or adapted demountable load carrying and working bodies using a hook-lift handling system.

The cab was positioned on the right, leaving space on the left for a hydraulically operated front loader or a forage harvester.

Demountable attachments included a rear delivery manure spreader with the wheels and drawbar removed, plus a fertiliser spreader with 3t load capacity. 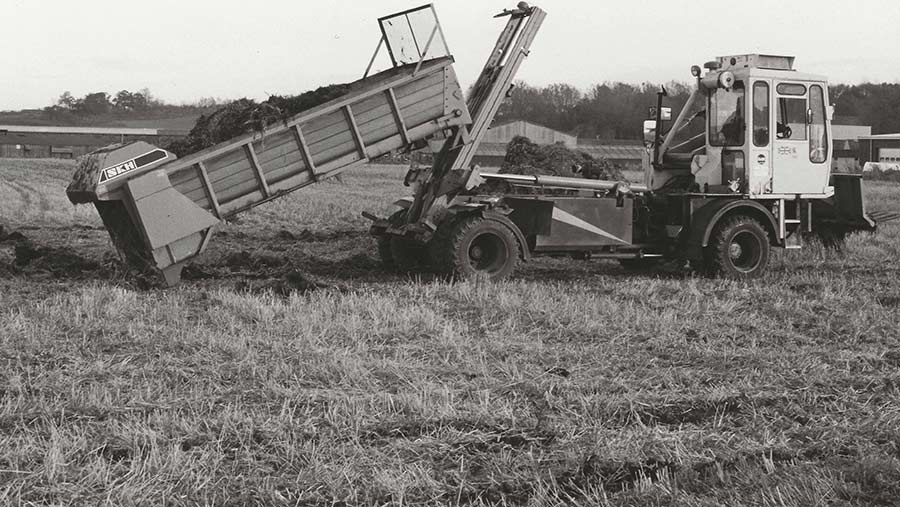 As the NIAE tractor was designed entirely for research, with no production plans, it was equipped with two different transmissions to allow comparisons to be made.

One was a truck-type mechanical gearbox with a hi-lo transfer box providing 10 forward speeds, but the driver could also choose a hydrostatic transmission.

The maximum forward speed was 65kph, and the specification included four-wheel braking, front and rear suspension and a 10t gross weight carrying a 5t payload.

The transport tractor brought plenty of interest at demonstrations and open days, with praise for the ride comfort provided by the suspension and for the convenience of the demount system. However, the NIAE design features have not so far made much commercial impact.

After several years in storage, the original vehicle was eventually sold and is believed to be in a vintage tractor collection.