Publicity spectaculars featuring tractors are unusual, but they have been used to give an extra boost to new developments that prove difficult to sell.

An example is the introduction of low-pressure inflatable tyres on the Allis-Chalmers Model U tractor in 1932, which were the first practical alternative to steel wheels with removable lugs.

High-pressure car and truck-type tyres were not suitable for agriculture because of poor traction efficiency, and solid rubber tyres were reserved mainly for industrial work and road haulage.

Allis-Chalmers in America discovered the benefits of using inflatable tyres with reduced pressure when it fitted a Model U tractor with a set of discarded aircraft tyres, and there was enthusiastic support from the Goodyear and Firestone companies – both keen to develop special tyres for an important new market.

There was less excitement among farmers, many of them concerned about the risk of punctures, and the durability and replacement cost of the new tyres.

Adding a fourth gear to the rubber-tyred Model U to raise the maximum speed to 15mph instead of the 3.5mph for a standard three-speed version on steel wheels won few additional customers at a time when almost all farmers were used to the slow pace of working with horses. 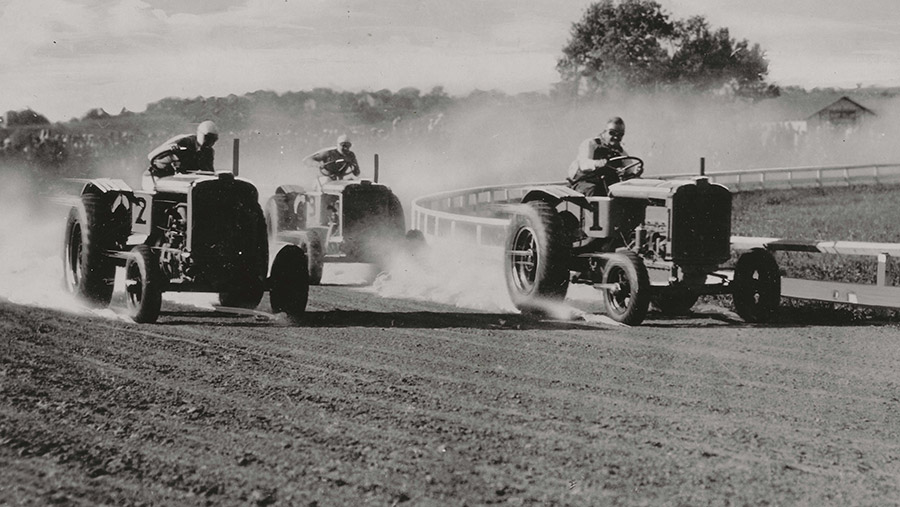 The disappointing sales persuaded Allis-Chalmers to launch a publicity campaign with speed as the theme.

This included a group of rubber-tyred Model U tractors specially tuned to form a racing team that performed at farm shows and other events during 1933.

Their top speed was about 35mph and the drivers included Barney Oldfield and Ab Jenkins, racing car drivers with an international reputation. 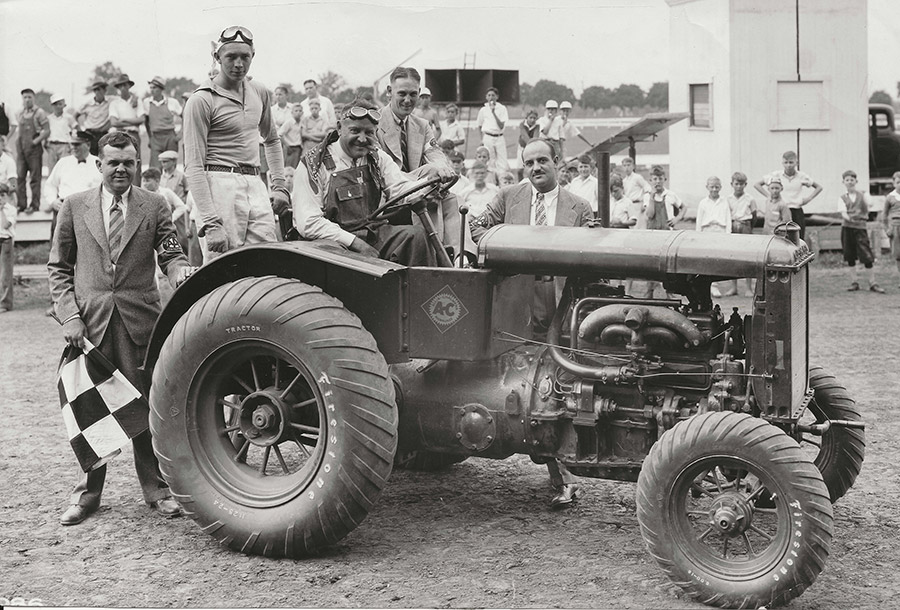 The Model U races became a popular attraction, and other speed-related activities in the campaign included long-distance road runs, plus a highly tuned Model U setting an officially recorded world speed record for tractors at 67mph.

The campaign, which lasted about six months, was a success and, by 1937, almost half of all new wheeled tractors sold in the US were on inflatable tyres.

The tyres used on the Model U were the early ancestors of those on virtually all modern tractors, but the 1933 world speed record has not survived.

Another publicity challenge was attracting customers for the amphibious, four-wheel drive tractor introduced in 1964 by County.

Called the Sea Horse, it was a floating version of its Super-4 model based on a 52hp Fordson Super Major, and it propelled itself by the action of the tyre treads in the water.

The four tyres were extra large to increase the air volume and help keep the tractor afloat, and it was also helped by large, sealed buoyancy tanks attached to the front and rear.

Other modifications included waterproofing the engine dipsticks and the clutch housing.

It is not clear what sector of the tractor market County had in mind when it added the Sea Horse to its product range. 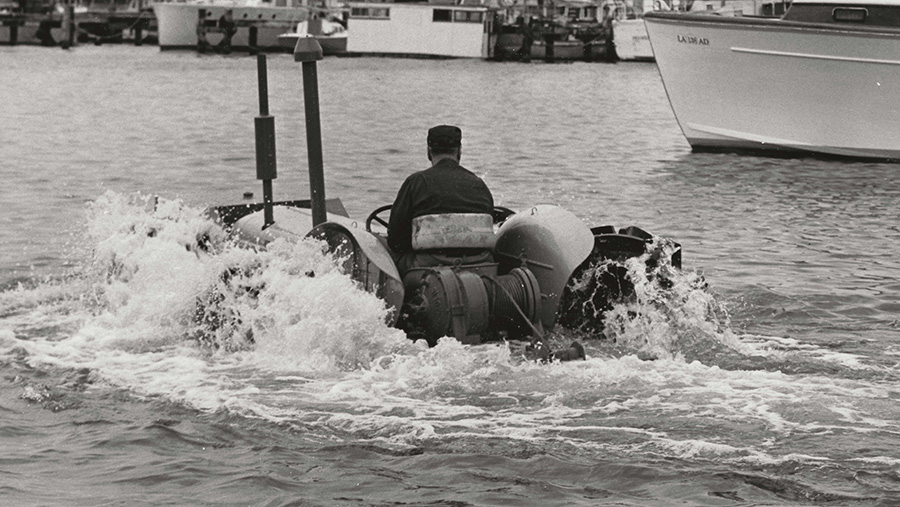 The Sea Horse visited Florida during its US visit. Supplied by Mike Williams

But the company backed it up with an ambitious and imaginative sales campaign that included a demonstration on a lake in Russia, while in the US, the Sea Horse aroused curiosity as it cruised among sleek pleasure boats at Fort Lauderdale, Florida.

The boldest publicity venture for the Sea Horse was crossing the English Channel from France to the Kent coast – a route that was in the news because it was attracting swimmers at the time.

Using the tyres for propulsion in the water produced a slow travel speed, and the 33-mile Channel crossing took seven hours and 50 minutes to complete. 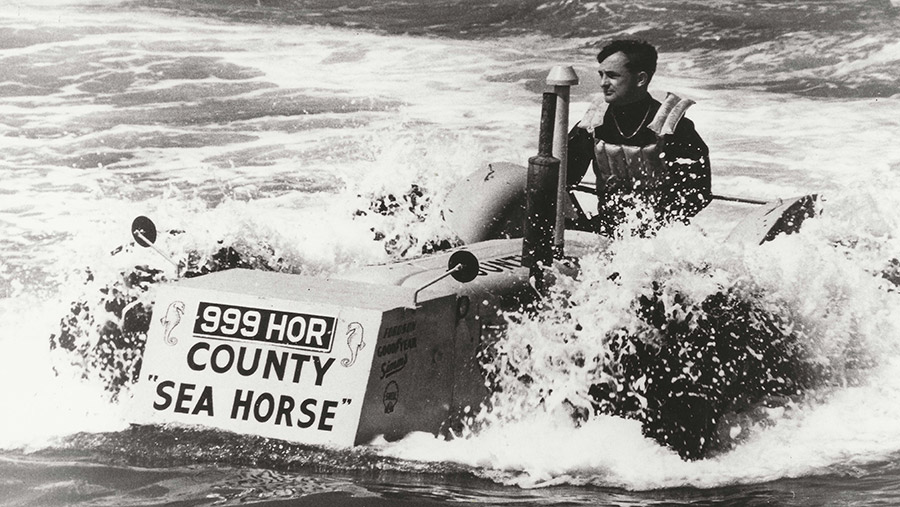 Apart from being slow, it was also a wet journey for the driver, as the lack of a cab means he had to put up with spray from the tyres. The tractor was also splashed by the wakes from passing ships – some of which came close to the Sea Horse because the crew wanted a better view of the floating tractor.

When it arrived on the Kent coast, the Sea Horse was driven to a nearby farm to begin pulling with field equipment, demonstrating that it was a real working tractor.

Driving across the sea on a tractor brought worldwide publicity that may have benefitted County tractor sales generally, but few customers needed an amphibious tractor.

There are reports of an export sale to a farmer with land on several small islands, and one or two Sea Horses were bought for coastal survey work, but the tractor was not a sales success.

While demand was expanding steadily in the US and Canada, where tractor power was helping to bring large areas of prairie land into crop production, UK farming continued to rely on horses, plus a contribution from steam power on larger acreages, and there was little interest in the recently arrived tractors.

The leaders in the UK’s fledgling tractor industry during the early 1900s were Dan Albone’s Ivel Agricultural Motors and the Saunderson company. Both made small, highly versatile tractors that achieved impressive export sales but attracted few UK customers.

In spite of the slow growth in their home market, Albone and Saunderson made a big effort to improve UK sales.

Versatility was the theme of Herbert Saunderson’s harvesting demonstration in 1906.

The main attraction was a Universal tractor powered by a 30hp engine and equipped with a belt pulley plus a removable load platform with 2t capacity. 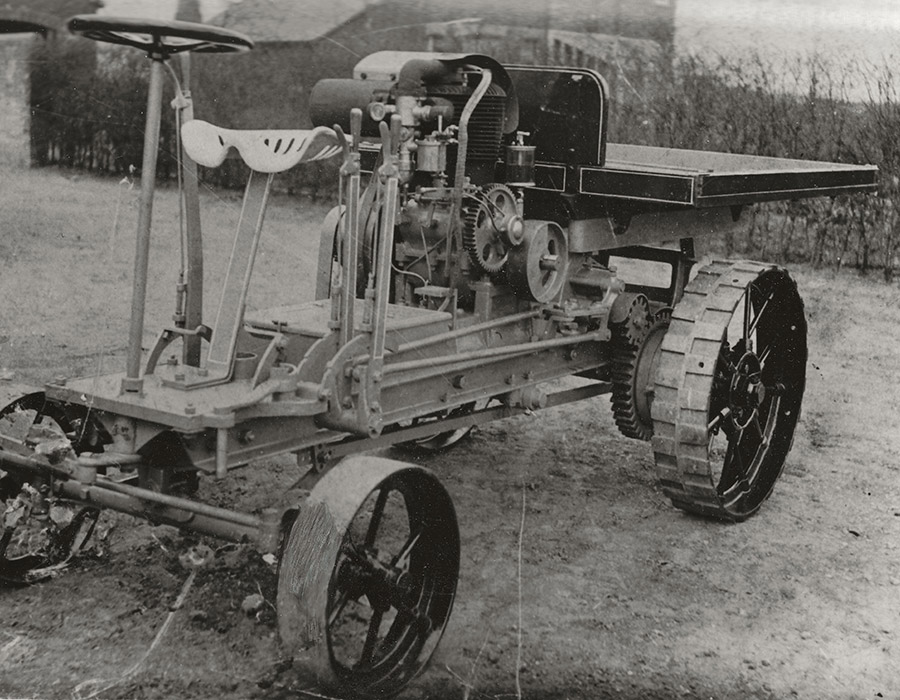 The programme began with the tractor harvesting wheat with a binder, and then the load platform was attached to carry sheaves to the headland.

With the platform removed again, the tractor’s belt drive powered a threshing machine and was then used on a milling tool to grind some of the grain into flour, which was taken to a local bakery to be turned into bread.

Meanwhile, the tractor remained in the field ploughing and cultivating the freshly harvested stubble before pulling a seed drill to sow next year’s wheat crop.

The programme ended with freshly baked loaves arriving in the field to provide a picnic tea.

Dan Albone’s Ivel three-wheeler made its first public appearance at the 1902 Royal Show with an 8hp engine, but power increased on later versions to reach 24hp by 1913.

Disappointing demand from UK farmers encouraged a search for alternative markets, starting in 1904, when Albone decided that the all-terrain capability of a tractor could be an asset on a military ambulance dealing with battlefield injuries.

He redesigned one of his tractors, adding armour-plated bodywork, and a pair of rear doors that opened to both sides to protect stretcher bearers carrying a casualty, plus space to carry medical equipment.

Senior military officials watched a demonstration and used rifle fire to test the armour plating, but then lost interest in an idea that could have been developed to save many lives a few years later in the First World War battlefields of Europe. 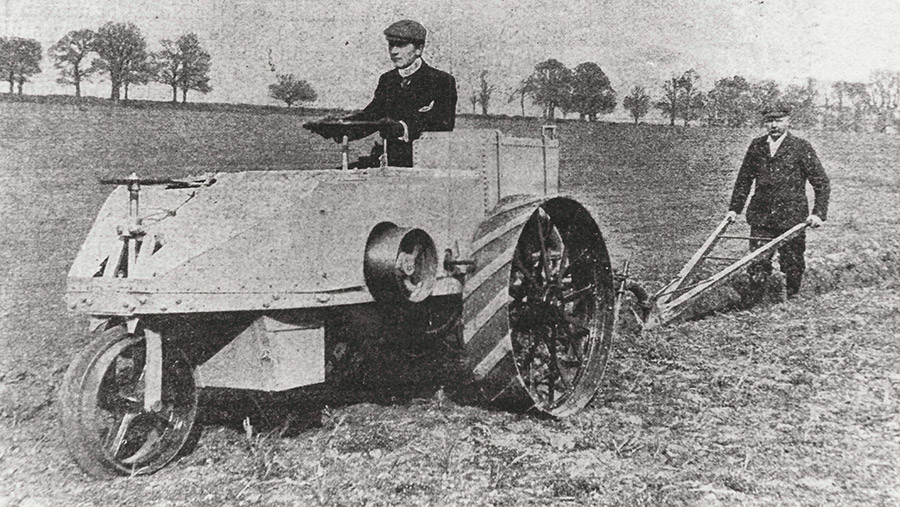 Dan Albone guides the plough during a demonstration with one of his Ivel tractors. Supplied by Mike Williams

Another of Dan Albone’s tractor ideas was using the Ivel as a rural fire engine.

A demonstration in 1905 showed the tractor pulling a water pump, using its belt pulley to power the pump and produce a jet of water, and to add a touch of realism it carried a small crew of men – perhaps from the Ivel factory – dressed in firemens’ uniforms. There are no reports that any sales resulted.

The arrival of the Ford 9N tractor, or Ford-Ferguson, was a major event in tractor history, combining Henry Ford’s manufacturing and marketing resources with the productivity benefits offered by Harry Ferguson’s implement attachment and control system.

The American launch programme for the 9N in 1939 was planned to make a big impact, organised in two sections starting with an introductory session for US dealers hosted by Harry Ferguson.

This was followed later by the main launch programme on Henry Ford’s farm near Detroit, where almost 500 guests were lavishly entertained. 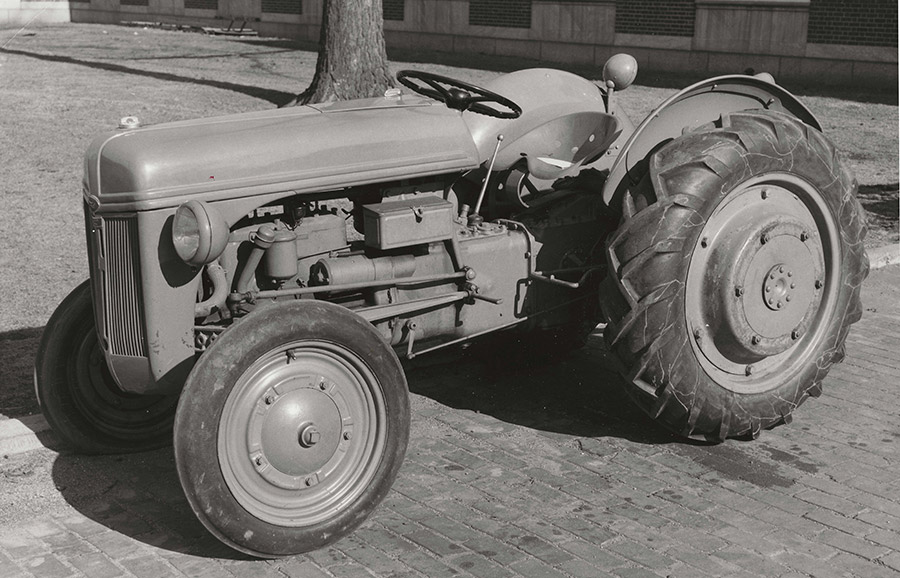 It must have been a memorable event, particularly for David McLaren, who was one of the tractor drivers for the 9N ploughing demonstration.

David was an eight-year old pupil in the local village school, and he was included in the demonstration team to prove that the 9N can be handled by someone who does not have great strength or many years of tractor driving experience.

Ford and Ferguson would both have been aware that many potential 9N owners and drivers would previously have worked with horses, and might be hesitant about choosing a tractor with a strange looking implement attachment system and using unfamiliar hydraulic technology.

David’s performance was presumably a success, with one report claiming that the furrows he turned were as straight as those produced by Harry Ferguson.