The history of the tractor began in the late 1880s, when petrol engines provided an alternative to steam, which had driven the power farming revolution for almost 100 years.

Britain was the world leader in developing agricultural steam power, and the earliest record of steam working on a farm was in Wales in 1798, when a stationary engine was employed to drive a threshing machine.

High costs and the limited number of uses meant few stationary steam engines were installed, but this all changed when portable steam engines pulled by horses, and self-propelled traction engines, started to arrive in the 1840s.

Their mobility meant much greater versatility, attracting contractors and large farms while providing a worldwide growth opportunity for British industry.

While Britain was focused on steam power, tractors with petrol engines were starting to arrive on American farms.

The first tractor for which records survive was built in 1889 by the Charter Gas Engine Co, owned by John Charter. His first design used the wheels and transmission from a steam traction engine, powered by a single-cylinder Otto petrol engine.

Nicolaus Otto had built the first successful four-stroke petrol engine in Germany in 1876, and engines based on his patents and carrying his name had been produced in America since 1878.

Few details have survived of Charter’s first machine, but we know it powered a thresher and that the performance was probably satisfactory because a further five or six Charter tractors were sold.

It was not a long-term success, but it probably inspired others to experiment with alternatives to steam. They included the JI Case company, which was emerging as America’s leading agricultural steam engine manufacturer.

Case built an experimental tractor in 1892, using some traction engine components and a twin-cylinder petrol engine producing 20hp. Development work on the project continued for several years before being abandoned because of poor engine reliability. 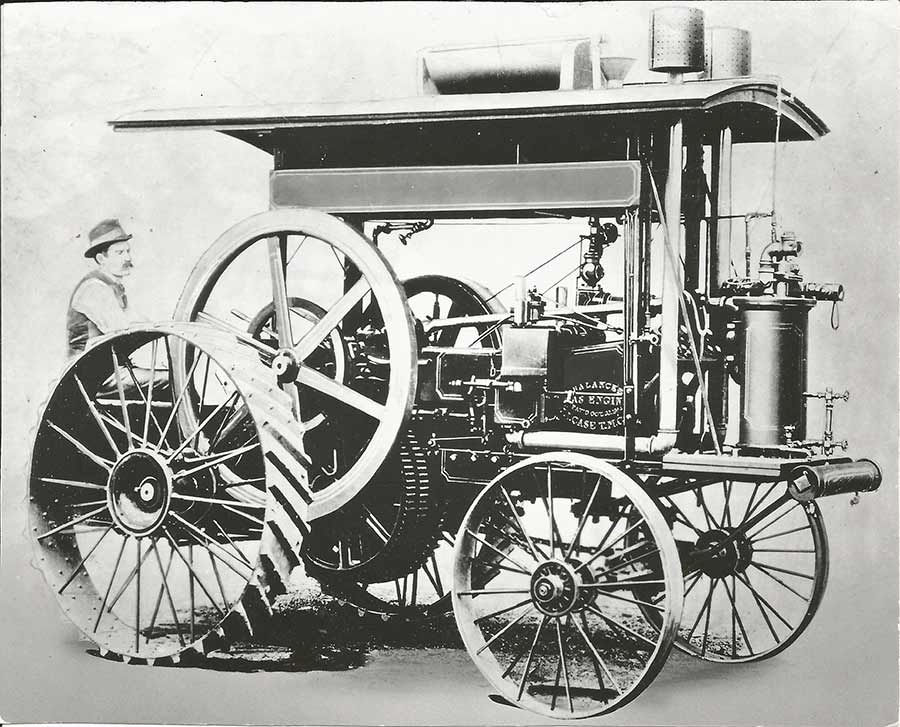 Bear in mind that steam power in the 1890s had almost 200 years of development behind it and was relatively reliable, while the four-stroke petrol engine had been around for less than 20 years and its primitive ignition and fuel supply systems were often troublesome.

Case carried on with steam power but introduced its first production tractor in 1911, just in time for the surge in tractor sales during the 1914-18 war. While demand for steam power on farms was shrinking rapidly, Case was beginning a new chapter as a leading tractor manufacturer.

Another 1892 newcomer in America was the tractor built by John Froelich, an agricultural contractor with a business that included steam-powered threshing equipment.

Froelich planned to expand his business, and he built a tractor to power an additional threshing machine. He used a traction engine chassis and wheels to carry a Van Duzen petrol engine producing 20hp from a massive single cylinder with a thumping 35.5-litre capacity.

His tractor was a success, and in the following year Froelich and a group of businessmen started a company at Waterloo, Iowa to build tractors based on his design.

The company, the Waterloo Gasoline Traction Engine Co, began small-scale production in 1893, but two of the first customers were not satisfied and returned their tractors. 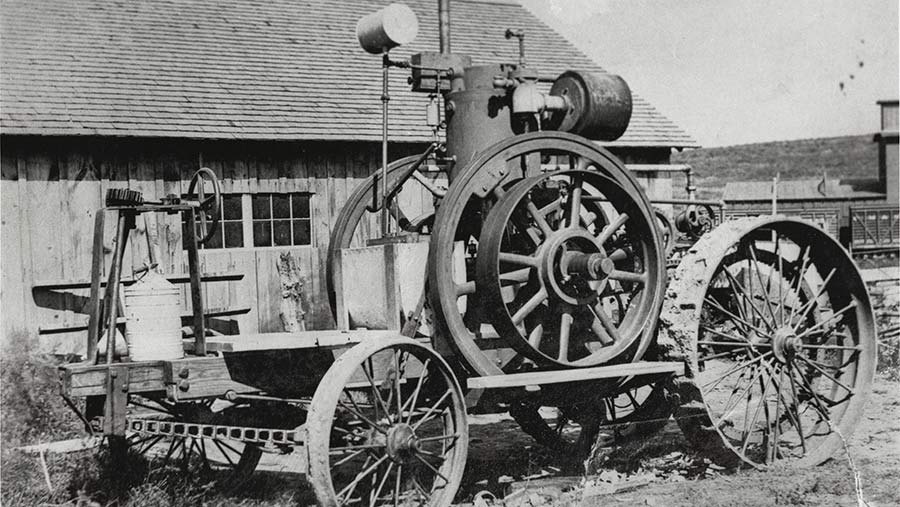 After this setback John Froelich left the company, which stopped making tractors and concentrated on petrol engines.

The company returned to tractor production in 1912 using the Waterloo Boy name. In 1917 Deere & Co entered the tractor market by taking over the Waterloo company, and Waterloo Boy models were the start of John Deere’s long and illustrious tractor history.

In the mid-1890s more American newcomers arrived on the fledgling tractor scene, including the Otto company that had supplied the engine for John Charter’s first tractor in 1889. Otto used one of its own 15hp engines to power its first production tractor in 1894, but there were few sales.

The Huber company, a leading steam engine manufacturer, was more successful, diversifying into tractor production in 1898 after buying the Van Duzen engine company. Its tractor success continued for more than 40 years.

Another early success was a company established in 1897 by Charles Hart and Charles Parr. They had built an experimental engine while they were university students and their company initially focused on engines, with their first tractor arriving in 1901.

They used one of their own two-cylinder petrol engines, producing 70hp and equipped with oil cooling instead of water. 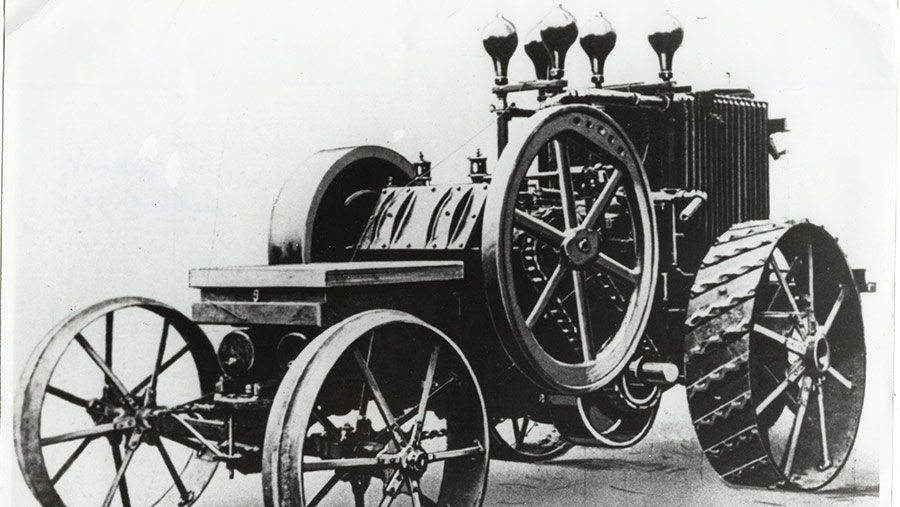 Much of their early success was in what was then the high-horsepower sector, including a 100hp model in 1911, and they also claimed to have introduced the word “tractor”, which featured in one of their advertisements in the early 1900s. The Hart-Parr company was still making tractors in 1929 when it lost its identity in the merger that formed the Oliver farm machinery company.

The sales boom enjoyed by Britain’s agricultural steam engine manufacturers continued during the 1880s and 1890s, and it probably left little time or enthusiasm for experimenting with tractors.

An exception was Richard Hornsby & Sons, based in Grantham, Lincolnshire – one of the smaller steam engine manufacturers.

It completed its first tractor in 1896, the first British-built design to achieve commercial success when it won a silver medal at the 1897 Royal Show and in the same year became the first tractor sold in Britain.

The customer was an estate in Surrey, and a further three Hornsby tractors were exported to Australia. A tracklaying version demonstrated to military authorities helped start a development programme that would lead on to the world’s first battle tanks. 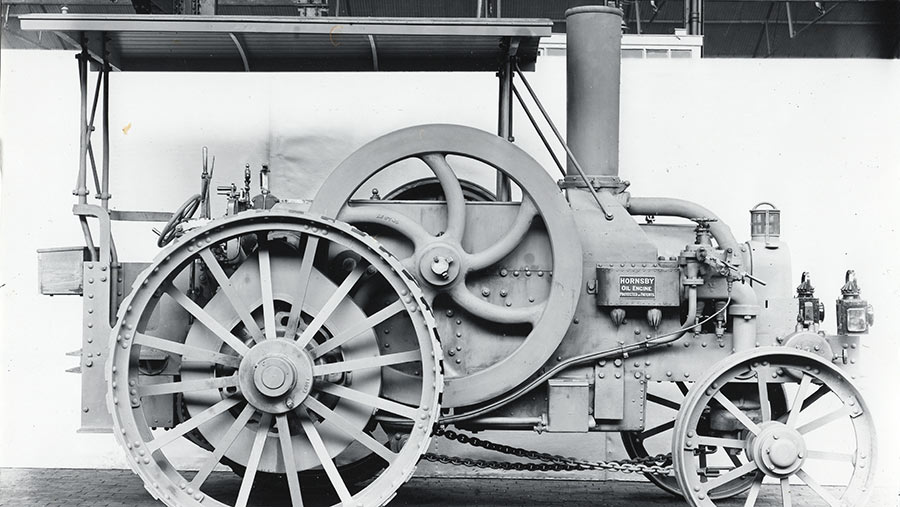 Britain’s first production tractor was built in 1896 by Richard Hornsby & Sons, but only about four were sold

The tractor was powered by a Hornsby-Akroyd engine, made by the Hornsby company after it acquired the production rights from inventor Herbert Akroyd-Stuart in 1891.

It was the first compression-ignition engine, arriving just a few years before Rudolf Diesel’s eponymous creation. It was started by using a blowlamp to create a hot-spot on the cylinder head and ran on heavy oils such as paraffin instead of petrol.

The single-cylinder engine used in the tractor developed 20hp, but other sizes were available and it was a huge success for Hornsby. Engine sales totalled more than 32,000 units and included one that generated electricity for the lights on the Statue of Liberty in New York and another lighting up the Taj Mahal in India. The tractors were far less successful and attracted few customers.

The Hornsby and almost all the very early American tractors were heavyweights designed mainly to replace steam traction engines for stationary work and haulage. But other British pioneers took a very different approach by developing lighter, more versatile tractors to replace horses for field work.

They included Professor John Scott, who had returned to Scotland following a teaching career at what is now the Royal Agricultural College in Cirencester. He began his tractor design work in the late 1890s, forming a small company to put his ideas into production.

His first tractor, displayed at the 1900 Royal Show, featured a 20hp petrol engine, a belt pulley and a platform at the rear for carrying up to three tonnes.

Its most futuristic feature was a mounted cultivator attachment with three powered rotors carrying vertical tines – an ancestor of today’s power harrows. 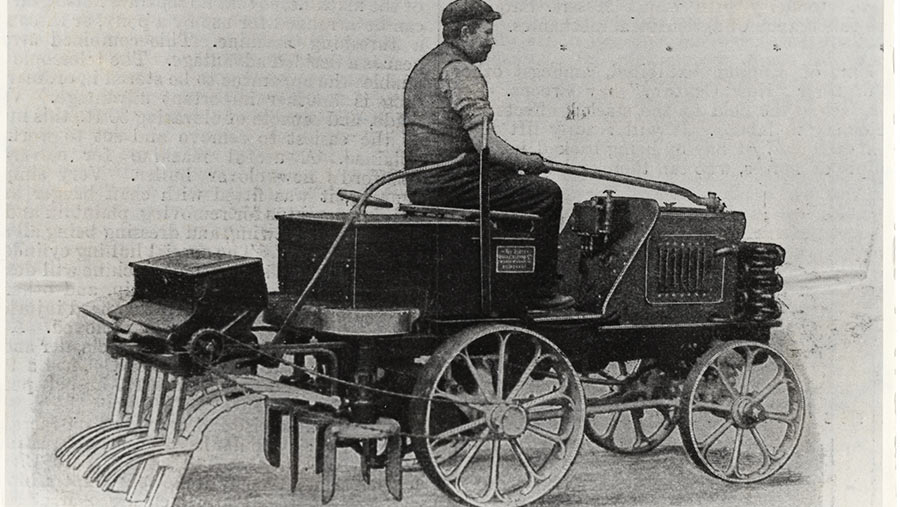 For the 1903 version, a seed hopper with a chain drive from one of the rear wheel hubs was added to the cultivator to provide an early version of minimum tillage. He also added a gear-driven front power take-off to operate equipment such as a binder that could be pushed instead of pulled.

Few Scott tractors were sold and his prediction, during a talk to a farmers’ club in Scotland, that tractors would one day replace horses for farm work was not well received in an area where breeding and selling working horses was an important enterprise on some farms.

One of the first tractors made by Herbert Saunderson’s company at Elstow, Bedford, was a farm transport vehicle which broke down while competing in a demonstration linked to the 1898 Royal Show.

Later the company made various versions of its Universal tractors, and their versatility was the feature emphasised in an on-farm demonstration Saunderson organised in 1906. 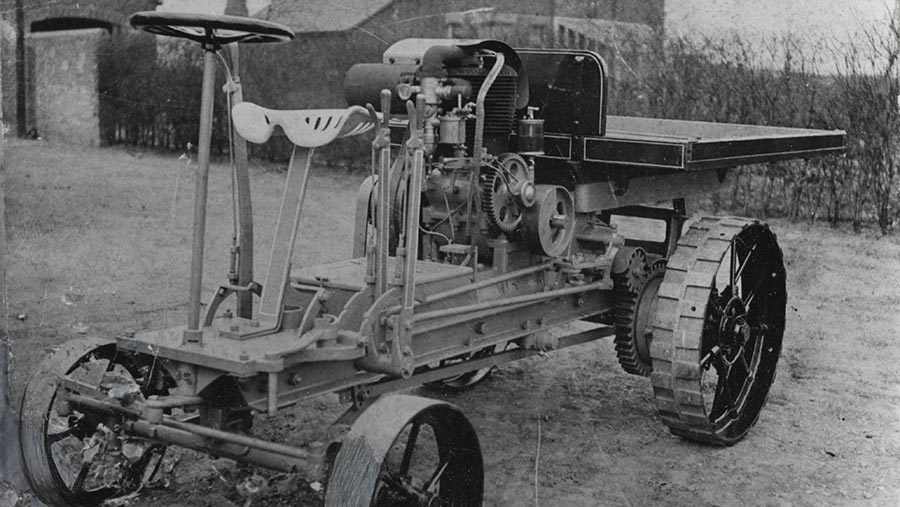 Held in a wheat field, the programme started with the tractor pulling a binder to harvest some of the crop, and the sheaves were then carried on the tractor’s rear load platform to a threshing machine on the headland.

The tractor’s belt pulley was used to power the thresher, and it was used again to mill the grain.

While the flour was rushed off to a nearby bakery to be turned into bread, the tractor ploughed and cultivated the stubble and then pulled a drill to sow next year’s wheat crop while visitors enjoyed a picnic tea that included the freshly baked bread.

Another major step forwards in power farming versatility arrived with the Ivel tractor, built by Dan Albone, the son of a market gardener and publican. He began experimenting with engines in about 1896, and within two years had finished building his own car using a Benz engine, with his first tractor following in 1901.

At that time Albone’s main business was making bicycles, some of them exported to markets including China and Japan, and the Ivel name on his bicycles and tractors was borrowed from the river in Biggleswade, Bedfordshire where his business was based.

Tractor production began with an 8hp engine, increasing to 24hp during the last few years of production, using engines supplied by Aster and the Payne & Bates company.

Design features included a three-wheel layout and a large rectangular water tank which provided engine cooling while adding weight over the driving wheels.

The UK tractor market was just starting to develop and there were few domestic customers, but the Ivel was a remarkable export success.

Overseas sales during the first three years of production covered 18 different countries and included an order from the Philippines for 14 tractors, while an American company built a small number under a licence agreement.

Italy’s Ministry of Agriculture presented a special medal to Albone’s company to celebrate his tractor’s advanced design, and the Ivel was “undoubtedly the great attraction” at the 1904 Paris Show.

He also made efforts to find non-farming markets, and these included converting an Ivel into a military ambulance with rough-terrain capability, armour plating and space to carry medical equipment and a patient on a stretcher.

It was demonstrated to senior officers who tested the armour plating with rifle fire, but apparently took no further interest in an idea that might have saved lives in the First World War.

Albone also showed a tractor equipped as a fire engine, which he demonstrated pulling a belt-operated water pump and carrying fire hoses and a crew dressed in firemen’s uniforms.

Special versions of the tractor included a narrow model built to navigate the rows of a French  vineyard, while a tractor adapted for an Australian fruit grower was probably the world’s first orchard tractor.

The Ivel should have been the start of one of the tractor industry’s great success stories, but Dan Albone died in 1906 when he was just 46, and without his ideas and enthusiasm the company drifted into decline and ceased trading in the early years of the war.