When the first tractors arrived on farms in the 1890s, they were equipped with steel wheels, and it took 40 years for inflatable rubber tyres to arrive.

Steel wheels were already standard equipment on steam traction engines, but they had a number of disadvantages. One of the problems was vibration and poor steering control when travelling over rough ground.

For tractors, this limited the typical maximum speed to between 5kph and 8kph, which was not much faster than the horses that still did most of the work on farms.

Another problem was that the steel wheels used on steam engines were not designed to provide maximum traction for field work. 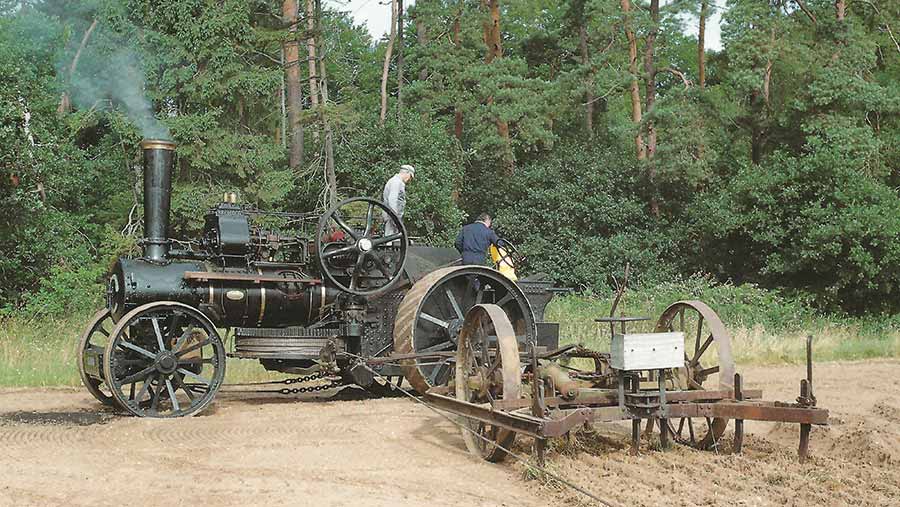 Steam power on farms was used mainly for stationary work such as threshing, while for ploughing and cultivating, a cable system allowed the steam engine to work while standing on the headland. 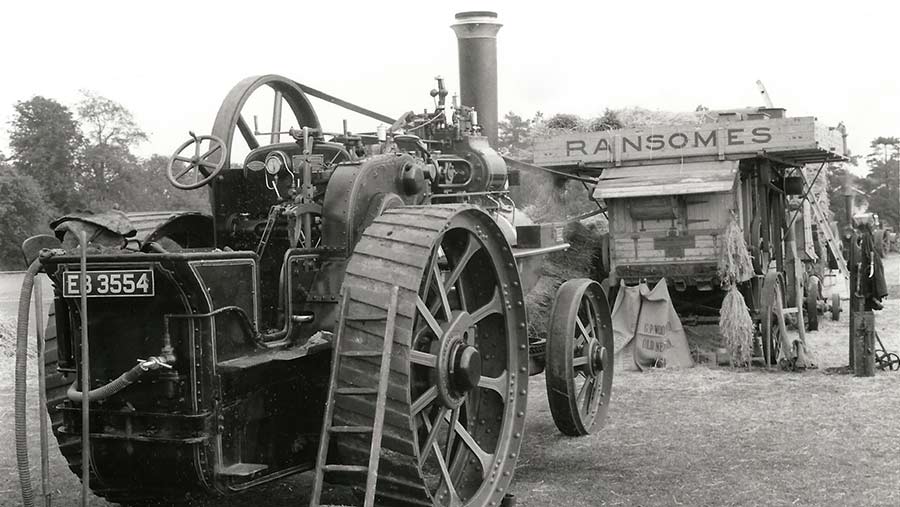 Being lighter and more manoeuvrable, tractors were more suitable for pulling cultivation equipment, but the steel wheels had to be modified by adding lugs or cleats to improve the grip.

As well as increasing traction, the lugs could also cause surface damage and in many countries they had to be removed or covered by a protective steel rim before tractors could be driven on public roads – a time-consuming and unpopular extra job for the driver. 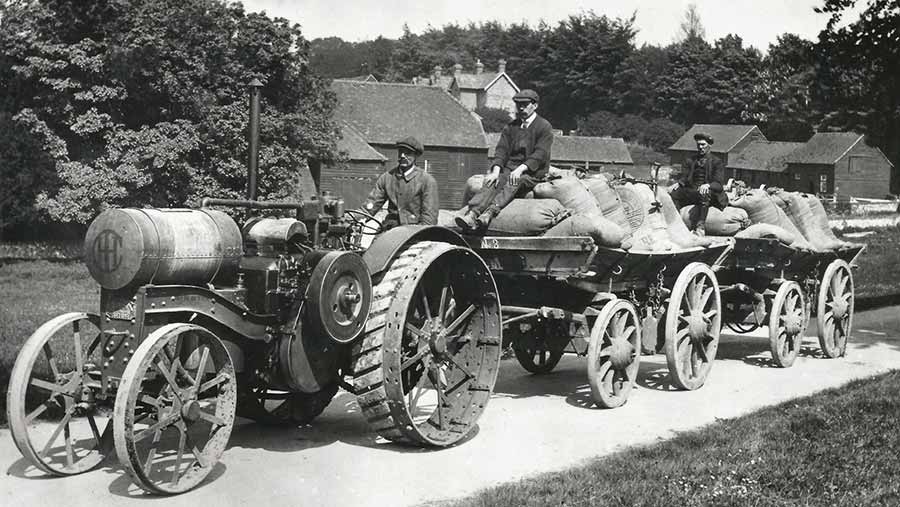 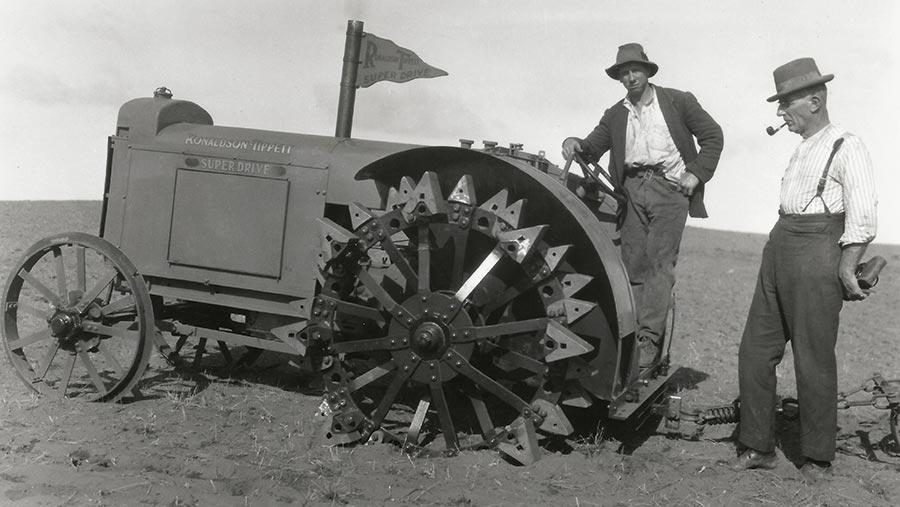 The driving wheels on this 1930 Ronaldson-Tippett tractor are fitted with steel lugs providing up to 7.6cm penetration 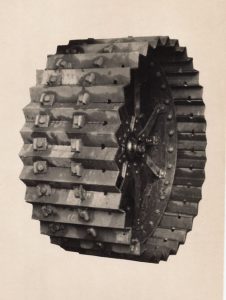 The driving wheels on its 30hp Super-Drive tractor could be equipped with 10 different lug designs providing up to 11.4cm of ground penetration.

Options for the Super-Drive also included an extra wide steel wheel designed with a profiled rim and a series of small lugs, which was developed specifically for crushing the natural vegetation when previously untilled land was being prepared for cultivation.

There were several attempts to introduce improved wheel equipment, and an early example arrived in 1909 when the American based Avery company announced its 36hp Tractor Truck. 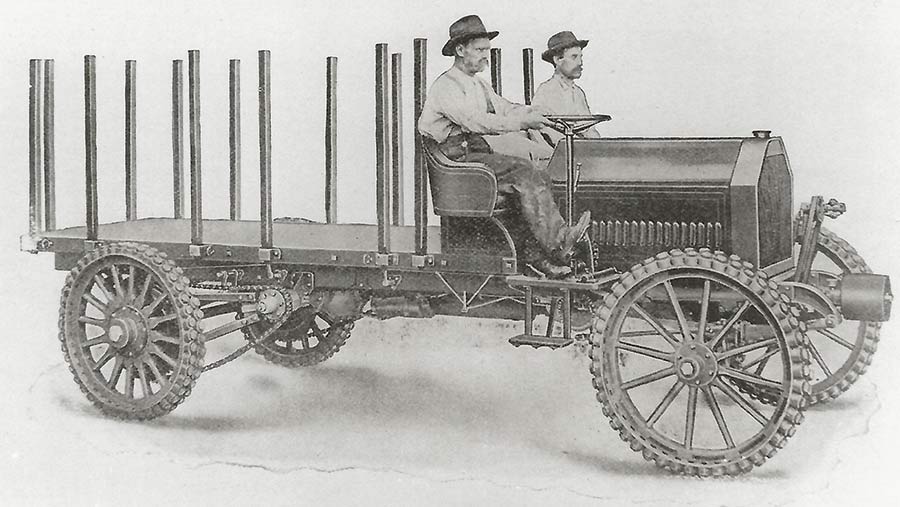 This was one of the first transport tractors, equipped with a 3t capacity load space over the rear wheels, a belt pulley for stationary work, enough drawbar pull to handle a three-furrow plough, plus a suspension system that allowed a 26kph maximum speed.

For general transport work, the rolling surface of each wheel carried hardwood plugs inserted into special indentations, but the attachments list also included a set of steel lugs for the rear driving wheels to provide extra grip for jobs such as ploughing.

Tractor Truck production continued for about five years, but the wood-trimmed wheels were not adapted for other models in the Avery range.

A different approach to boosting traction efficiency was using four-wheel drive. It was available from several American tractor companies during the First World War and in Italy and Germany during the 1920s, but there was little commercial interest until the 1950s, when County and other mainly British tractor companies introduced improved designs.

Attempts to use rubber tyres achieved little success at first. Solid rubber tyres were sometimes fitted during the 1920s on tractors used mainly for haulage work, and although they were quieter and gave a smoother ride than the standard steel wheels, they were not suitable for field work. 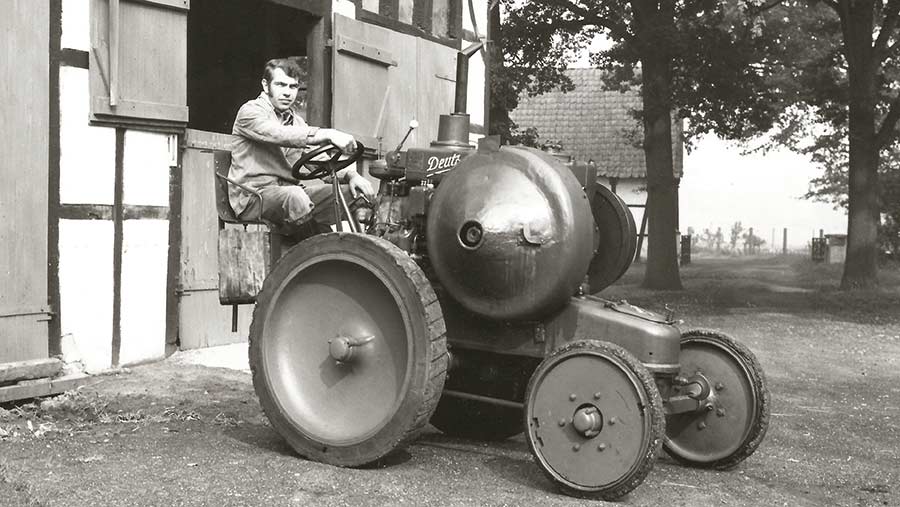 Built in 1926, this Deutz MTH222 tractor is equipped with solid rubber tyres suitable for stationary work and transport

Ordinary truck tyres with about 70psi (4.8bar) inflation pressure were occasionally used on tractors, but with limited off-road capability.

The rubber tyre breakthrough started in the US, when the Allis-Chalmers company tested a set of low pressure inflatable tyres in 1932.

The tyres had been developed for use on aircraft and were designed to operate at only 15psi (1bar), a low pressure by 1930s standards.

For their test, the Allis-Chalmers engineers used a set of tyres that had been removed from an old aircraft, which were fitted on a Model U tractor owned by one of their customers with a 60ha dairy farm.

The 33hp tractor with its rubber tyres was used for the daily work routine on the farm and the report on the tyre performance was enthusiastic.

The results were positive, with a list of performance benefits that included a more comfortable ride, improved fuel economy and a significant increase in work rates due to improved traction plus faster travel speeds.

The new tyres were offered as an option on the Model U tractor during 1932, but sales were disappointing as many customers had doubts about the durability of rubber tyres and there were concerns about the risk of delays due to punctures.

To boost the demand for the new tyres, Allis-Chalmers organised one of the most ambitious publicity campaigns in tractor history.

The theme was speed, based on the fact that the arrival of rubber tyres had allowed Allis-Chalmers to update the Model U specification, fitting a new four-speed gearbox with a 16kph top speed to replace the original three-speed version with its 8kph maximum.

To highlight the speed difference Allis-Chalmers engineers prepared a team of souped-up Model U racing tractors that performed at farming events throughout the United States during 1933.

The tractors were tuned to achieve speeds approaching 60kph and, with leading racing car drivers at the wheel, the tractor races are said to have attracted more than one million spectators. 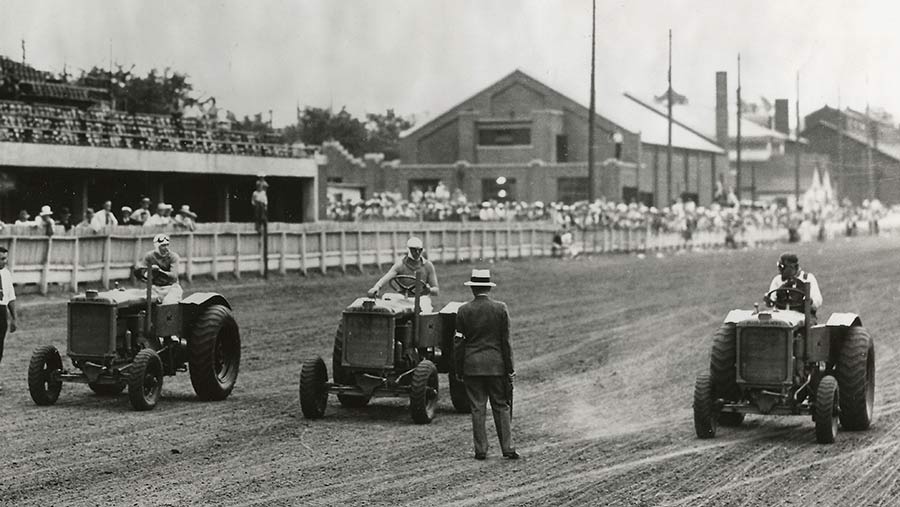 Some Allis-Chalmers tractor dealers are said to have joined the campaign, driving a Model U on a public road at more than the official speed limit for tractors because the local press publicity attracted by a speeding farm tractor was worth more than the cost of the fine. 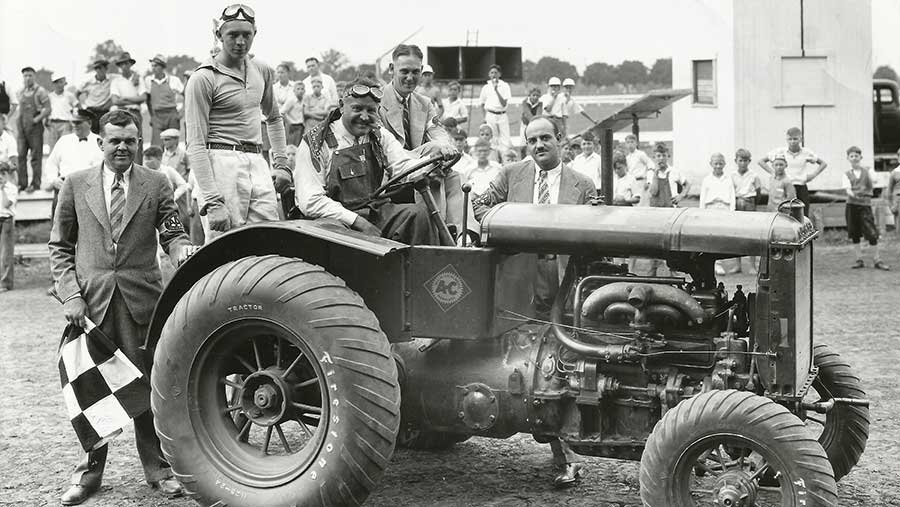 Barney Oldfield, one of America’s most famous motor racing drivers in the early 1930s, posing at the wheel of his race-winning Model U tractor

The campaign was successful, boosting the demand for tractor tyres and forcing other American tractor and tyre companies to offer similar equipment.

The special inflatable tyres were also an international success, available in the UK from 1933 when Dunlop started making them, with Michelin production in France dating from 1934.

Apart from a Second World War setback when rubber tyre production was restricted, the switch from steel wheels continued.

From the 1970s onwards, interest in the design of wheels and tyres has been boosted by increasing concern about soil compaction linked to using heavier tractors and machinery.

The initial response was to fit dual or triple wheel sets and to add cage wheel extensions to spread the load over a larger surface area, but improved tyre technology has produced more effective and versatile solutions.

More recent developments that have followed the success of the inflatable tyres on the Model U racing tractors include the bias ply structure featured by Goodyear on its Terra Tires designed to work with 5psi (0.3bar) inflation pressure, while Kleber – now part of the Michelin company – helped to pioneer the success of radial ply tyres.