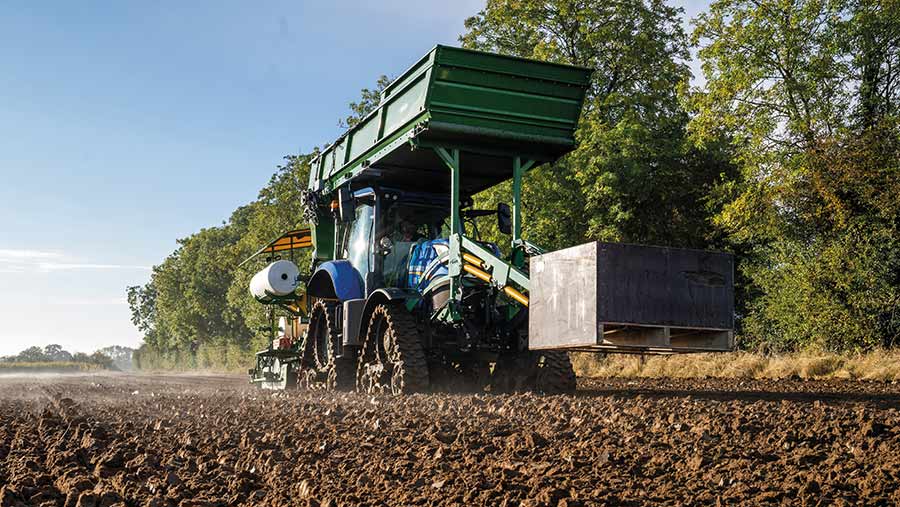 Committing to horticulture on an arable scale requires some pretty niche kit, and for Mark Eves, director of Belmont Nurseries, that extends to a £200,000 bulb planting outfit.

The business is the UK’s largest commercial grower of outdoor tulips, which cover one-quarter of the 220ha it manages around Terrington St Clement, on the north-west Norfolk coast.

The planting of daffodils, peonies, gladioli and sweet williams is a near-year-round affair, which is completed by a modified New Holland T7 210 Auto Command adorned with extra metalwork.

The tractor was delivered in August to replace an old Massey Ferguson 3065 and, because it was ordered without any footwear, Mr Eves’ first job was to fit a set of second-hand 320mm-wide Soucy tracks.

“Given that we plant going into the winter months, we sometimes struggled with wheels. They tended to sink in wet patches and compacted the soil in less-favourable conditions, so we decided it was worth trying out a set of tracks instead.”

“They’ve got a far bigger footprint and the tractor now glides across the soil – to the extent that we probably travel when we shouldn’t.”

“The tyres we had before formed a 36cm-wide, 30cm-long footprint, which equated to 1.08sq m/rear wheel.

“By comparison, the tracks are 32cm wide and 160cm long – a 5,12sq m footprint, which is five times that of the wheels. And because they are narrower, we’ve been able to widen the bed widths and get more crop in each field.” 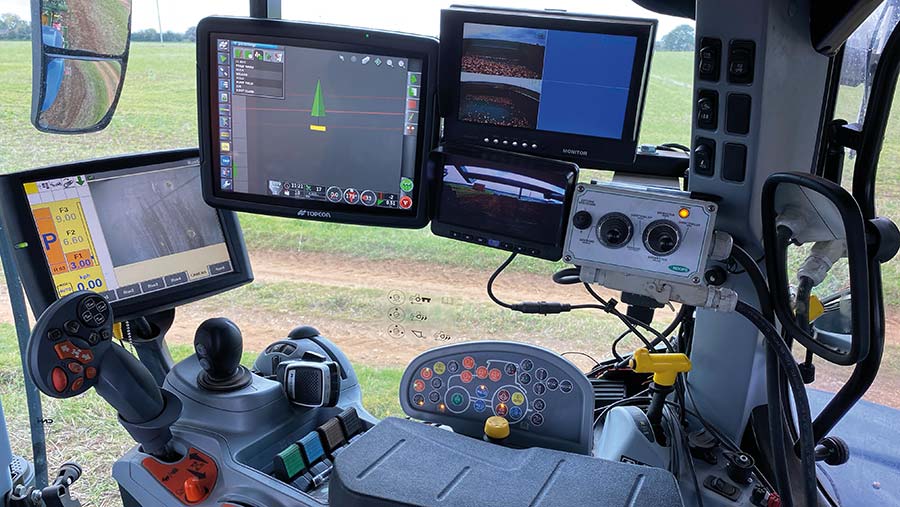 The other advantage, says Mr Eves, is the way the long base of each track unit rides over lumps and bumps, maintaining a consistent linkage height and eliminating significant changes in pitch that would previously interfere with the planter’s depth control.

However, he is careful not to travel on roads any more than necessary, as this has a habit of crippling tracks and idlers – both of which can be costly to replace and are a bit of an inconvenience to fit.

“I’m expecting them to last for 10 years, which will coincide with changing the tractor. When that time comes, we can always just bung a set of second-hand wheels on, as the swap only takes us an afternoon to complete.”

The most peculiar-looking part of the rig is the Frankenstein-esque combination of gangly front-end loader and over-cab hopper.

This, along with the rest of the bulb planter, is built by Dutch firm Koops.

The kit was fitted to the tractor in the Netherlands but, due to Brexit import complications, had to be taken apart and refitted by Mr Eves once it was back on UK soil.

This was a rainy-day task that, surprisingly, took just one afternoon.

Operating the planter is a two-person job. The luckier of the two sits in the warmth of the cab to monitor the various camera feeds and guidance, and also work the loader. 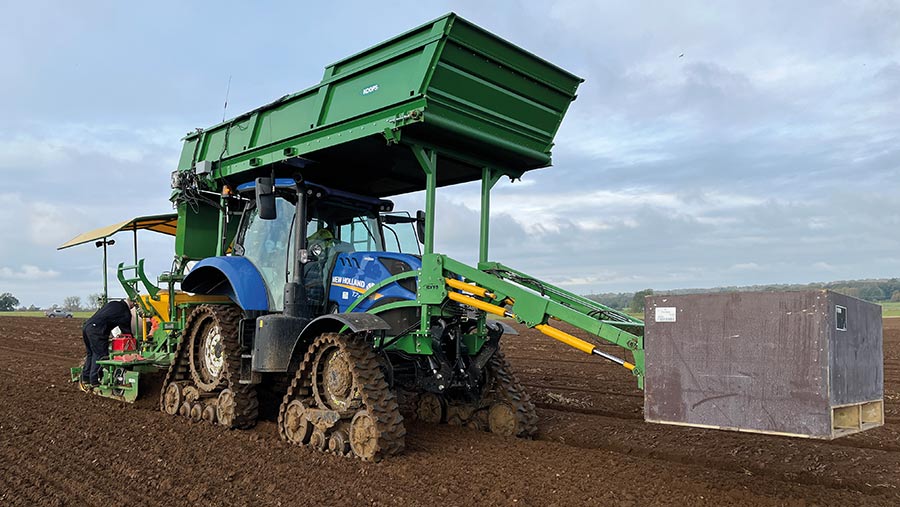 This is used to lift the 600kg bulb boxes up and over the 4.6m lip into the chassis-mounted hopper above the cab. It has a 2t capacity ­– enough for three or four boxes.

In the hopper bed is a full-width PVC belt conveyor. This is intermittently engaged by the planter operator to keep a second holding hopper on the rear implement topped up.

From there, the bulbs are dropped onto a shaking bed that evenly distributes them across the full width of the planter.

The quantity of bulbs allowed to drop through the base of the hopper is controlled automatically, based on the travel speed and a bulb counting sensor.

For tulips, the target is anywhere between 100 and 400 bulbs per running metre.

At the end of the shaking bed, they drop between two beds of net, which are held taut by a series of rollers. This netting system makes it easier to lift the bulbs cleanly out of the soil at the end of the season.

A second tractor works just ahead of the planter, switching between a subsoiler and plough to prepare the ground.

Given the planter only covers about 3ha/day, working any further in advance risks losing moisture or leaving ploughed ground vulnerable to heavy rain.

The planter itself carries two snow plough-like bodies to part the soil, pushing it outwards against big side guards to leave a 1.54m-wide bed. 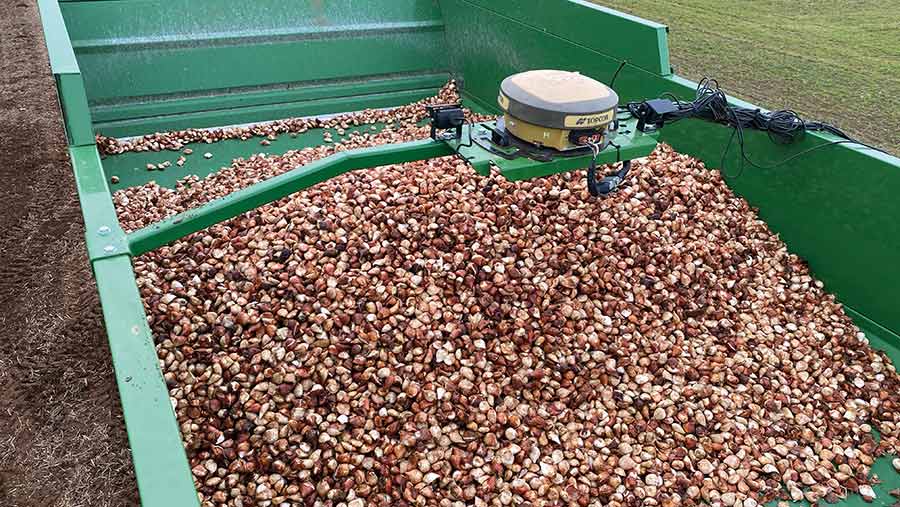 These talk to a pair of hydraulic rams that were retrofitted in place of the standard linkage lift rods. They control the lifting and lowering of the planter, with the tractor’s three-point linkage kept in a fixed position.

The bulb-carrying net is then laid in the cleared area, with discs and a hood used to cover it with soil – the only element of consolidation.

As the planter trundles along at just 4.5kph, repeatable, pinpoint accuracy is essential in order for it to return to the field day after day without any shift in the bout lines.

With that in mind, Mr Eves upgraded his GPS kit in the summer, replacing the old Topcon X30 unit with the firm’s X35 console, installed by Cambridgeshire distributor LH Agro.

This brought with it greater processing power and updated software, making it easier to map footpaths, tracks and headlands.

It controls various elements of the planter via Isobus, including automatic section control to minimise wastage in non-croppable areas, planting rates and bulb counts, all without any manual input from the driver.

“We’ve had Topcon software since 2008, but the improvements over the years have made a huge difference to how we manage things.

“We can now monitor how many bulbs are planted, and where the different varieties and stocks – of which we have more than 35 – are planted.

It’s all done within 5mm accuracy and means we know where each variety starts and stops within a field.

“This can also be monitored from the tractor cab, so the driver can make sure the planting targets are being met.”

The guidance system runs from Belmont Nurseries’ own Topcon base stations, with one at the farm and one mobile unit. This provides the repeatable accuracy required and means there’s no ongoing RTK correction signal subscription required.

Next on the shopping list is a new receiver to replace the AGI-3 unit currently mounted on top of the hopper.