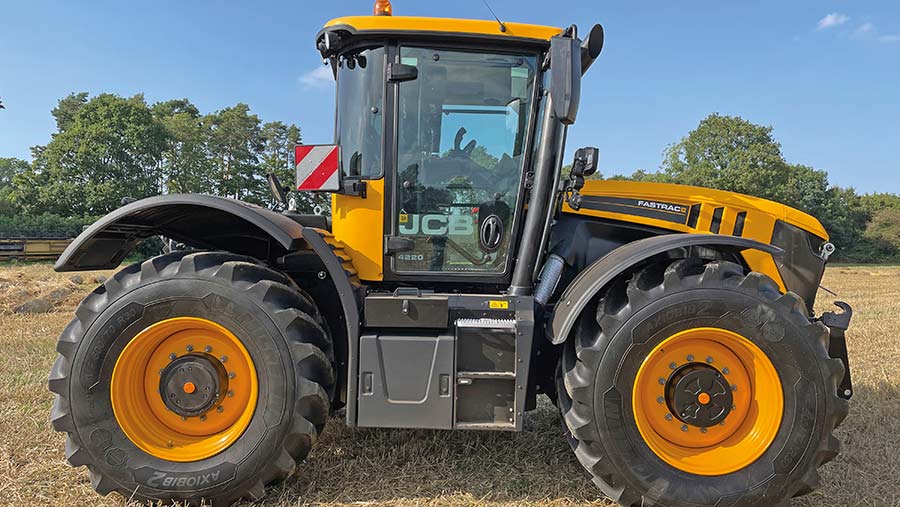 There’s no tractor quite like the JCB Fastrac. Since it hit the market in 1991, this equal-wheeled workhorse has found multiple vocations from high-speed haulage to self-propelled spraying and spreading.

Its versatility has helped it garner a loyal band of followers, but there’s no getting away from the fact that it’s spent much of its 20-year lifespan struggling to match the performance of conventional tractors in the field.

The launch of the 4000-series in 2014 promised to change all that. Little was carried across from its 2000-series forebear, including the Cummins engine and Eaton Fuller truck-style gearbox, which were replaced with an Agco Power block and smooth Fendt CVT.

Fancy double-acting, self-levelling suspension was also brought in front and rear, along with a new chassis that allows for a tighter turning circle.

The cab was brand new too, and a considerable step up from its predecessor.

It was a make-or-break moment for the Staffordshire firm, which needed to shift larger volumes of tractors to turn a profit.

Pleasingly for JCB, the gamble paid off, with the company reporting a significant rise in sales figures..

The Fastrac now rubs shoulders with conventional tractor brands, often outselling the likes of McCormick, Landini and Deutz-Fahr, though still some way behind Valtra and Claas.

Most of the machines sold are range-topping 4220s.

The Fastrac is still top dog for road work, offering a pillow-like ride, cracking brakes and the ability to barrel along at 63kph without breaking the law.

It’s no one trick pony either, able to turn its hand to a wide range of field-work duties and specialist tasks, such as working with twin GPS steering.

Shortcomings are the fact that it can’t match conventional rivals on heavy cultivation jobs and the ageing in-cab screen is crying out for an update.

The 4220 has seen few major changes since launch, aside from a refresh in 2019 that coincided with the move to a Stage 5 engine.

It was introduced as the old version with a limited-slip diff had a habit of going pop when it was charged with too much heavy field work.

The toughening up process also saw hubs upgraded from 10 to 12 stud and the addition of larger kingpin bearings.

Other minor additions include a wider range of tyres, the ability to work with a swan-neck trailer and the option of factory-fitted Trimble GPS.

Hydraulic output also went up from 148 to 195-litres/min. 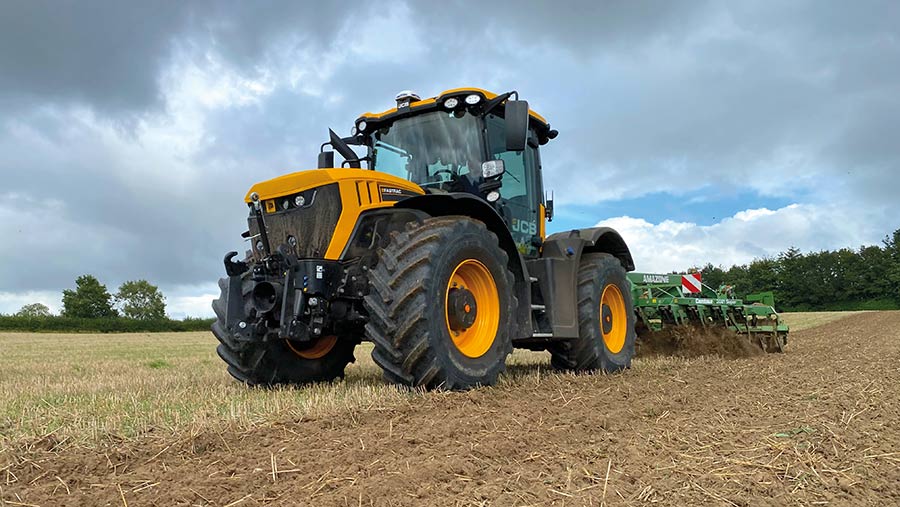 Is it any good in the field?

The Fastrac is a capable all-rounder in the field, but it comes into its own for any job that requires a decent turn of speed.

The smooth all-round suspension is to thank for this, making it a supremely comfortable tool for jobs such as bale chasing and straw raking.

Its four-wheel steering and tight turning circle also makes it easy to spin around on the headlands and get implements in through tight gateways.

Another stand-out feature is its ability to run demount sprayers and spreaders, as well as neat add-ons such as a crane or tipper body for loading a fertiliser spinner.

When it comes to draft work, the 4220 is considerably better than its predecessors.

This is partly down to the clever double-acting hydro-pneumatic suspension system front and rear, which transfers weight from heavy rear-mounted implements to the front axle for better handling and grip.

It works by simultaneously pushing up the rear suspension and pulling down the front.

With a 900kg deck weight added – mounted between the mudguards and just ahead of the rear axle – we had no problems lifting a six-furrow Kverneland plough without any additional front ballast.

Plus, it helped give some valuable extra grip when sitting in the furrow.

Our test tractor also had the benefit of being fitted with 600mm Michelin Axiobib VF tyres so we could keep the pressures low to maximise traction.

Impressive as all this was, it wasn’t quite enough to make the 4220 match the performance of the Fendt 724 we were running at the same time.

We tried both on the same plough and the 724 pulled a lot harder, gripped better and felt more at home on the job.

Granted, it has an extra 11hp on the max power rating, but the difference felt like more than this. Interestingly, we also had a Valtra 215hp T215 on test at the same time and this too had the edge over the Fastrac.

Perhaps adding some front ballast and having a play around with the setup would have evened things up.

At any rate, few people will be buying a Fastrac with ploughing as its primary workload, so any shortcomings in this area are unlikely to cause concern. Instead, a better take-home is that it can happily handle these jobs if it needs to.

Another feature that makes the 4220 stand out from the crowd is its Twin Steer function. This was launched in 2016 and it allows the front and rear axles to be guided independently using separate GPS receivers.

It serves a similar function to a side-shift rear linkage, allowing implements to be pulled into line when traversing hillsides, and it’s responsible for the firm shifting 20 or so models into the fresh produce sector.

We’ve seen the system in action, and it gives impressive results.

Four-wheel steering brings several other benefits in the field, such as the ability to perform tight headland turns, run offset wheelings for spreader work and track neatly in a standing crop.

Unsurprisingly, the Fastrac is in its element on the road. Top speed is 63kph and thanks to its supple suspension, powerful dual-caliper disc brakes with ABS, and a commanding seating position, it always feels like you’re in control.

Crucially, these features also mean that the Fastrac can legally travel at these speeds, unlike conventional 60kph tractors that have a 40kph speed limit in the UK.

Obviously, a lot of people turn a blind eye to that rule, but it’s reassuring to know that operators can max out without breaking any rules.

The aptly named Drive mode is best suited for road work and this allows the tractor to be driven like an automatic car, using just the accelerator and brake pedal.

Like a Fendt, it will adjust the engine revs and transmission ratios to suit the load, which it does to good effect.

It’s also easy to engage a cruise speed on long stretches to avoid the need to keep your foot mashed on the pedal.

Most of the time we kept the 4220 in four-wheel steer mode and left it to automatically kick out when it reached 25kph.

This gives the benefit of good manoeuvrability at either end of the journey, which is handy as it’s comparatively cumbersome without the rear wheels helping.

The downside is that the back end can feel a bit twitchy just before it switches to front-wheel steer, so for longer journeys it makes sense to run it with the rears locked straight. 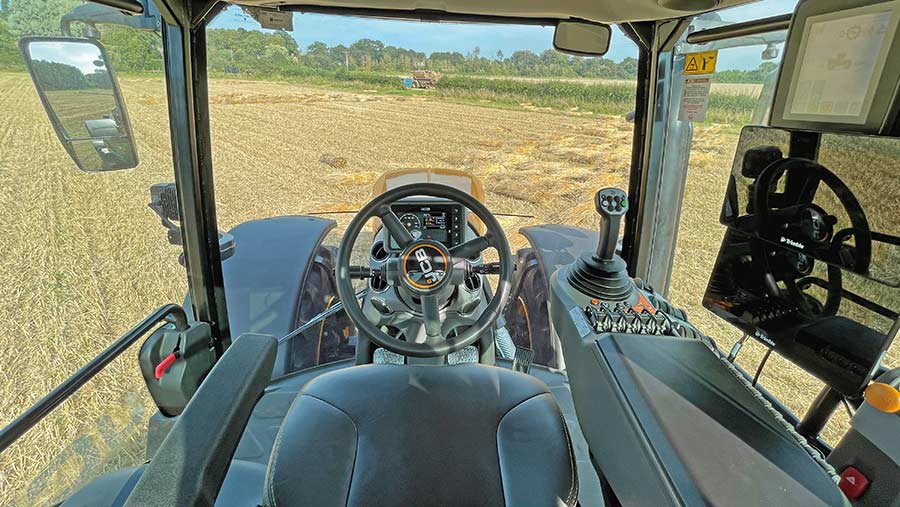 The Agco ML180 transmission is the same as that used by Fendt, but because it’s controlled by JCB software, it works slightly differently.

In the Fastrac, the joystick is pushed forwards or backwards to initiate a direction change and side to side for adjusting speed, providing you’re in a mode that permits it.

We think it’s less intuitive than the Fendt’s fore-and-aft speed adjustment but, in fairness, we’re more used to that setup.

When in high range, it makes sense to use Drive mode most of the time, as mentioned earlier. However, there are two other options – manual and powershift – that put revs on the hand throttle and speed changes on the joystick.

The only difference between the two is that manual goes up in small increments, while powershift makes stepped changes, just like its namesake.

The larger 8000-series includes the 280hp 8290 and 8330, which is rated to 335hp. These share many components with the 4000-series, including the cab, suspension setup and transmission. However, they offer a 70kph top speed.

These are also available in low range, along with three options. Flexi is handy for round baling, allowing constant revs to be set for the pto and speed managed on the foot throttle.

Dialling down the speed range is also useful for inching up to implements in a controlled manner.

Unlike a Fendt, there’s no stick mode with TMS for controlling the engine revs and transmission for jobs such as cultivating. Instead, there are a couple of field cruises that allow you to set a target working speed.

With these engaged, the transmission will try to get there with the minimum possible engine revs. Bizarrely, these will only work when the hand throttle is nudged forward a touch.

Finally, there’s a “rev-hold” function that allows the forward speed and engine rpm to be set for jobs including power harrowing and drilling.

So, in short, it’s possible to get it to do most things that you can with a Fendt – it just isn’t as user friendly. 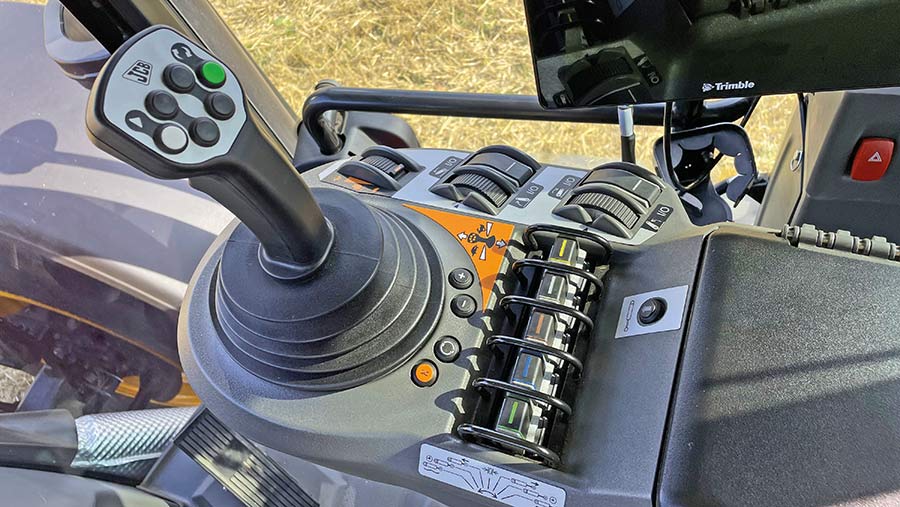 How about the cab and controls?

The Fastrac’s cab is spacious, light and offers good visibility, apart from the pick-up hitch of course – there’s a fold-down mirror, or you can add a camera to help with that.

A plush leather seat provides a comfortable perch, and there’s no other tractor that gives such a smooth ride at speed, or when bouncing over rough ground.

It’s not all good news, though. Over the past few years, some of JCB’s rivals have made huge strides in noise reduction, so if you hop from one of those into the Fastrac, the drone from the engine is noticeably louder.

But the most obvious shortcoming is the screen. This hasn’t changed since the tractor’s launch in 2014 and, compared with what John Deere and Fendt offer (JCB’s key price rivals), it looks very old-school indeed.

It’s small, the graphics look like they’ve been borrowed from a Sega Mega Drive, and it lacks the breadth of features of its competitors.

A recent tie-up with Trimble has brought in the option of adding a factory-fit GPS screen, which is marginally simpler than sourcing one through a dealer.

This mounts off the right B-pillar and does little to enhance the view to that side. Our test tractor actually had two fitted for the Twin Steer function, which contributed to a very cluttered feel. 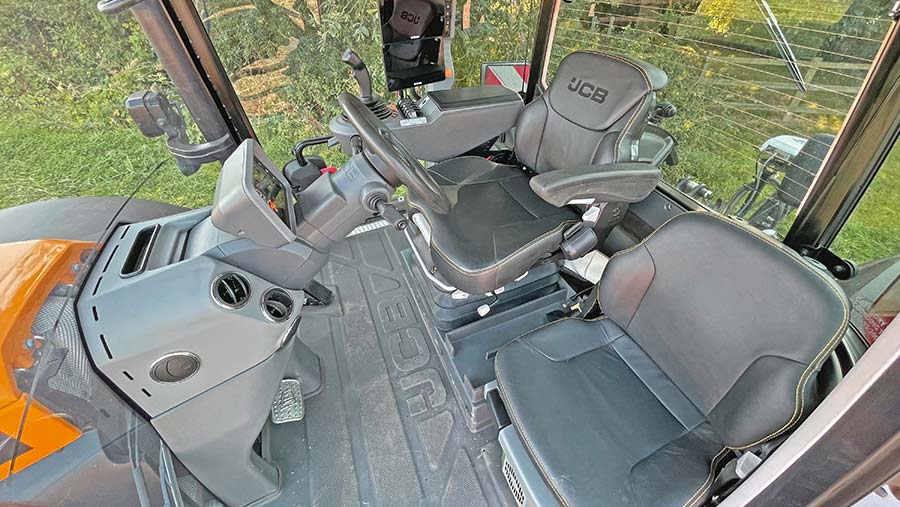 Has the engine changed?

The 6.6-litre Agco engine block and power outputs are the same, but the move to Stage 5 has required the addition of a diesel particulate filter (DPF) to the existing selective catalyst reduction (SCR) setup and diesel oxidation catalyst (DOC).

More noticeably from the operator’s point of view is an increase in the engine idle speed from 850rpm to 1,000rpm. The idea was to make the take-up of drive smoother, which it is.

However, it’s still nowhere near as slick as a Fendt, which just needs a light tickle of the throttle for it to move away from a standstill.