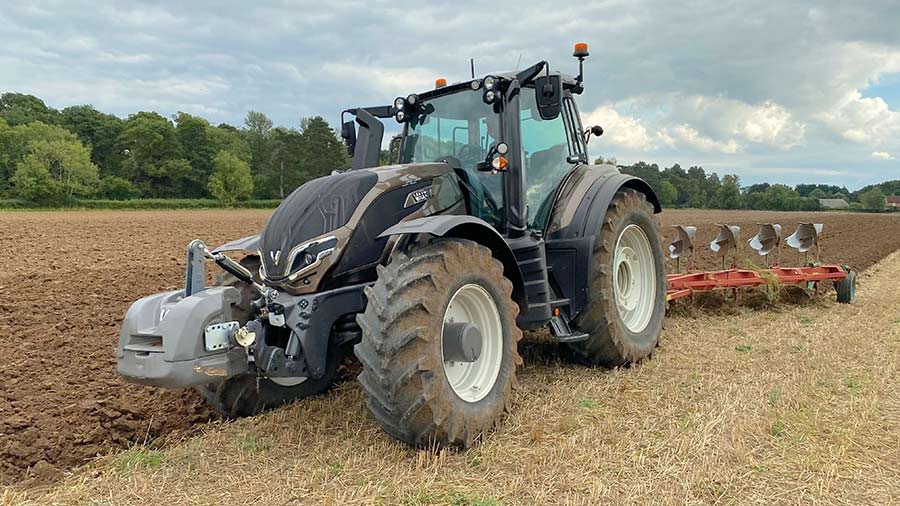 Valtra’s 175-250hp T-series is available in four specs, with the Direct CVT at the apex © MAG/Oliver Mark

Massey Ferguson and Fendt might reign supreme in Agco’s tractor portfolio, but Valtra is closing in after unleashing a blizzard of major updates to its tractor cabs and controls.

No longer content with being the stable’s junior member, the Finnish firm has been on a seven-year mission to reinvigorate its range, transforming it from niche campaigner to mass-market contender. The work of its seemingly supercharged R&D team has seen UK market share almost double to 6.5% and it is now snapping at the heels of Fendt in the annual rankings.

Although it may not be able to match its pricier sibling for sophistication and doesn’t have the global heritage of Massey Ferguson, it has a solid base on which to build – the firm’s Sisu engine division has always had a stellar reputation and its transmissions have required only mild titivation in the past decade.

The revolution was kickstarted with the long-overdue launch of a new five-pillar cab in 2014, followed by the addition of a fancy armrest three years later and, most recently, a series of nips and tucks to form what is now the fifth generation of the 175-250hp T-series.

The company has also tapped into a growing demand for an automotive-style ordering system, with its Unlimited studio offering buyers the chance to customise their tractors with everything from alternative cab trims and exterior colours to forestry guards and logging cranes.

This has been an unmitigated success, with an estimated 20% of new tractors now passing through the facility. However, it also has the potential to cause production jams that can extend waiting times and delay deliveries.

To speed things up and alleviate some of the pressure, Valtra has now decided to package the most common upgrades into “comfort” and “technology” spec bundles that can be fitted on the main factory line, rather than post production.

There is a cost benefit, too, with the premium interior (leather steering wheel, dark trim and chrome details) priced at £1,967 – roughly 75% cheaper than making the equivalent upgrades in the Unlimited studio.

Spools Up to five at the rear, plus one on/off low-flow

What about the controls?

The most significant change on fifth-gen models is the addition of a new Smartdisplay on the A-pillar – something it shares with the Massey Ferguson 8S range.

This has replaced both the fiddly, credit card-sized LCD screen that previously inhabited the corner post and the cluster of analogue binnacles behind the dash, which were the last remnants of the long-nosed, pre-2014 T-series. 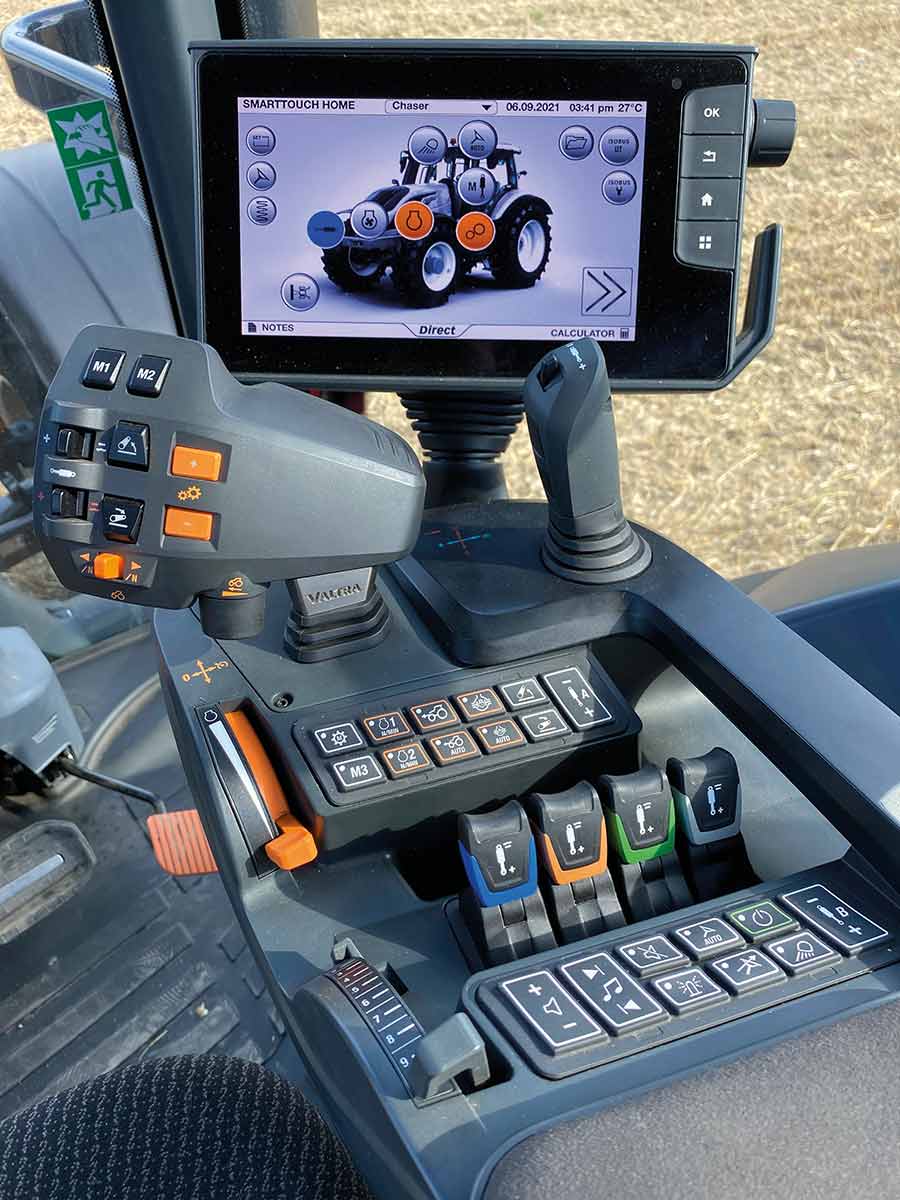 It’s crisp, clear and colourful, with the top third of the display devoted to engine rev, forward speed and fuel level read-outs, and the customisable section below controlled using a combination of dial and buttons on the steering column.

This is the primary means of altering hydraulic flow, pre-set gears and cruise speeds on the basic touchscreen-free HiTech and Active models, for which Valtra says it has seen a surge in demand – particularly from contractors looking for something simple, fast and powerful for haulage and big square baling.

However, the vast majority of T-series tractors are still ordered in Versu (the poshest powershifter) and CVT-driven Direct spec, which both include the 9in Smarttouch armrest touchscreen first launched on the 300hp-plus S-range back in 2017.

It’s about as well organised as a screen of this type gets, with the functions laid out across the silhouette of a tractor and coloured logos denoting specific transmission, engine, hydraulics and guidance settings.

There are still plenty of permanent physical controls too, including four chunky tabs to control the spools and a sliding depth control with a memory position that is ideal for ploughing.

For those willing to devote a bit more time to tinkering, it’s also possible to programme buttons on the joystick to almost any function. These are different shapes and sizes, so can be found without having to constantly glance downwards.

The second notable update is to the shuttle, a relic from circa 1998. Though Valtra has kept its physical dimensions pretty similar, it’s now a return-to-centre affair, rather than locating in detents for forward and reverse. This means operators can flip-flop between using it and the directional controls on the drive lever.

Other minor T-series tweaks include extra bracing in the door frame to stop it flexing when swung open and deeper sculpting to the side console, which allows the seat to swivel further without fouling on the trim.

There is also the option of twirling it the full 180deg to operate a chipper or, when the tractor is specced with the firm’s £4,000 Twintrac system, other reverse-drive implements such as triple mowers. 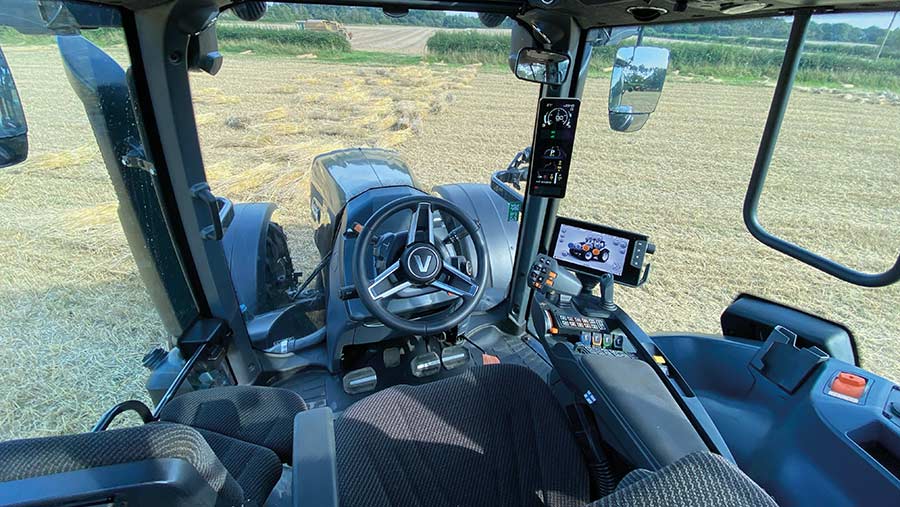 The four spec levels in the T-series range (Hitech, Active, Versu and Direct) are predominantly distinguished by two elements – the gearbox and hydraulic capacity.

The bottom three all run the same four-range, five-speed semi-powershift and, with Fendt presumably not in the mood for sharing its Vario transmission, the Direct – which accounts for half of T215 sales – is Valtra’s take on a stepless drive.

It has four distinct ranges (maxing out at 8kph, 17kph, 26kph and 57kph) that require a degree of operator input, so it’s more of a halfway house between bona fide CVT and semi-powershift.

The stepless element comes through the use of a hydrostatic pump and motor in place of the multi-plate clutches, which deliver seamless acceleration through each range.

While this arrangement clearly isn’t as slick as a Vario and can’t deliver unbroken drive to the top speed, it has a higher proportion of mechanical drive, making it more efficient in transmitting power from the crankshaft to the wheels.

Nudging the joystick to the right engages cruise control, with a scroll wheel allowing quick and easy alterations of the target speed. However, the hydrostat whines during heavy tillage as it adapts the oil flow to suit changing conditions.

Though this has no effect on performance and the tractor continues to pull smoothly with no perceptible break in power, the variations in pitch can become teeth-grindingly irritating after a few hours in the seat.

Playing with the five droop settings does little to subdue the noise, though it is worth shifting to another range – most likely from A to B, or vice versa.

This is a job to be done at a standstill to avoid overly acquainting yourself and your possessions with the front window.

The range change from C to D is slightly slicker, with Valtra’s engineers having tweaked the synchros in response to customer complaints of painful delays when downshifting on the road. It’s still a bit lumpy though, particularly when the transmission oil hasn’t warmed up and/or the tractor is travelling slowly.

The ride can be improved by speccing the £4,950 “comfort” package, which is available on every model – even the Active and HiTech.

It adds front-axle suspension, a choice of mechanical or air cushioning under the cab and a premium air-suspended seat, so may well prove attractive for those looking to make the most of the 57kph top speed in rough road areas such as the Fens.

It will also turn tightly, with its 10.5m circle bettering that of a large-frame John Deere 6R by about 70cm. 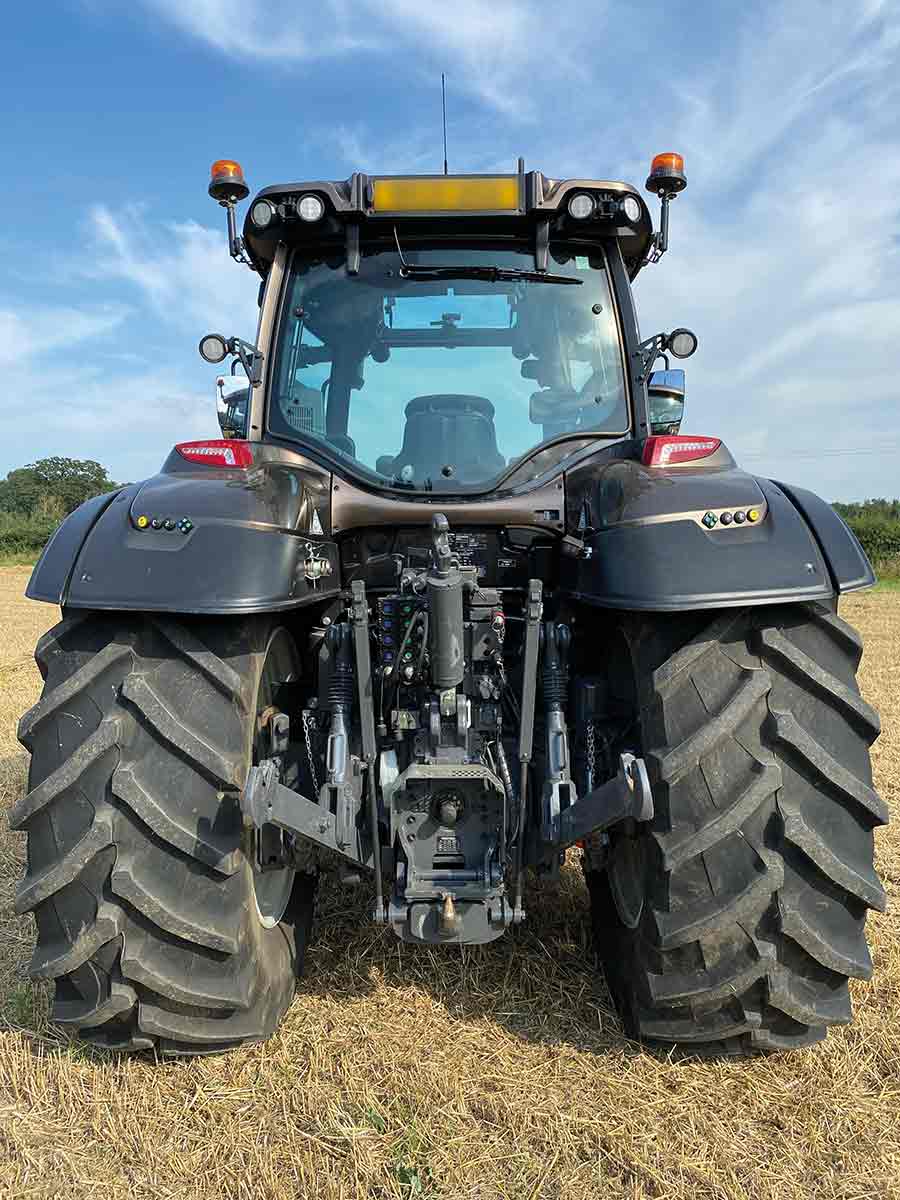 Maximum power reflects the model number, with our test tractor’s 215hp output cranked up to 230hp on transport and pto work. Valtra’s Smart Boost function also makes the extra firepower available when pulling away under load in B and C ranges.

The 7.4-litre engine, first developed by the firm’s Sisu division before it took on the Agco Power moniker, is a proven performer, having been around in various guises since the late 1980s. It holds on well down the rev range, but its satisfying purr is drowned out by the wailing transmission under heavy load.

New engine-related features in the screen include the ability to set an engine temperature or timer to engage the reversing fan, which will be handy for those running front mowers. The 850rpm idle speed also drops to 650rpm with the shuttle in park.

The T-series is equipped with four high-flow rear valves coupled to a 160-litre/min pump as standard, although there is the option to downgrade or upgrade (115 or 200 litres/min).

There is also a low-flow connection providing 15 litres/min, which is handy if you opt for a hydraulic top link and don’t want to occupy one of the main slices in the valve block.

These are numbered and grouped on the left, which saves marching around the implement to get to connectors on the far side.

Another plus is that the transmission and hydraulic oil circuits are separate from Active models upwards, which eliminates the risk of serious harm should the tractor be coupled up to an unloved implement containing mucky oil.

Operators get a reasonable view of the back end from the seat, particularly in the dark because the LED light has been moved from the pto guard to the fender to help illuminate the link arms and hitch. Handily, this switches on when reverse is engaged.

The new T-series has plenty going for it – the A-pillar screen is a vast improvement on the unfathomable LDC version of old, its wasp-like waist means it can turn tightly and the engine has a solid reputation.

However, Valtra’s real advantage is in the breadth of its optional extras, particularly at the cheap end of the spectrum, where buyers can still spec decent front-axle and cab suspension.

The flat-floored cab is big and comfortable and has an abundance of storage space, but the top-end models fall short of the likes of John Deere and Fendt in terms of finish. Though the dark colours and chrome details look the part, the plastics are on the thin side and don’t always fit where they should.

The whine of the Direct transmission can also get irritating in the field, so unless seamless drive is a necessity, we would opt for the four-range, five-speed Versu, which gives operators a bit more control. It’ll also save you about seven grand.

Valtra hopes to benefit from Agco’s on-going “Route 66” dealership restructure. This has seen the previous distribution network chopped up, with Massey Ferguson equipment now sold through dealers separate to those charged with the Fendt and Valtra franchises.

There are several reasons for this. For starters, both Fendt and Massey Ferguson have an extensive range of forage equipment and combines (same kit, different colours), so there is little reason to sell both from the same premises.

Secondly, the chiefs at Agco HQ consider Valtra a good foil for the Vario-only Fendt. That’s because it doesn’t offer a bona fide CVT gearbox – its most sophisticated offering, and the one featured in this test, is the Direct, which still has an element of mechanical drive and manual control.

There’s also the potentially thorny issue of growing similarities between Valtra and Massey Ferguson tractors, with the two sharing an increasing amount of hardware in a relationship not dissimilar to that of Audi, Volkswagen, Skoda and Seat in the VW Group.

This change of tact isn’t necessarily a bad thing, particularly if savings in development and production are passed on to customers.

It also makes it easier to maintain software compatibility across the Agco range, so Valtra’s Connect telematics system works with that of Massey Ferguson and Fendt.

Read more about the changes to UK tractor dealerships.