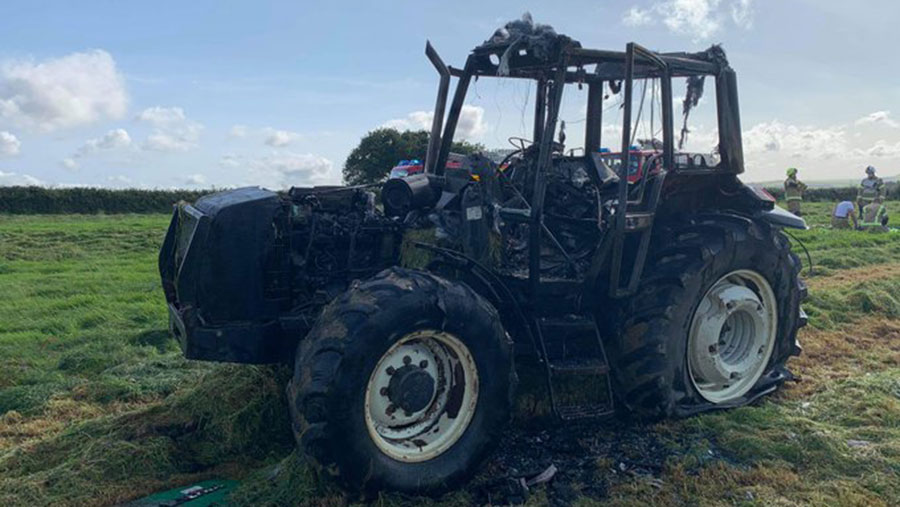 Overloaded battery terminals are a “major factor” behind a surge in tractor fires, NFU Mutual has revealed.

It has examined the causes of almost 1,000 modern tractor fires and found electrical accessories wired directly to the battery cables were a common factor.

When combined with the heavy current drawn from modern tractor electrical systems, these extra loads can lead to overheating and fires.

Traditionally, accidental tractor fires have been attributed to overheating bearings and other moving parts, or chafed wiring causing a short circuit.

But NFU Mutual staff engineers, who inspect damaged machinery, were concerned that there could be another factor behind a rise in fires in tractors that are only a few years old.

“During our in-depth investigation of these cases we have found a number of fires that have been caused by resistive heating of the battery terminal,” said Bob Henderson, technical engineering manager for NFU Mutual.

“In every case, the battery terminal has either been altered or has had an additional power feed added.

“This can compromise the efficiency of the battery clamp, making a poor connection and increasing resistance. This then causes a build-up of heat to the battery clamp and terminal, which ultimately can catch fire.”

Older equipment is not so power hungry and historically, drawing additional power supplies from the battery has been an accepted method, but this is no longer the case, he added.

Manufacturers have combated the problem by fitting power strips to cabs and they have also started to use the Isobus series of cable connector socket connectors – both of which avoid overloading the battery wiring.

Farmers are being urged to fit electrical accessories using appropriate connections such as Isobus, rather than direct to battery, to offer protection.

“These power strips and Isobus connectors can be fitted new or as an aftermarket fitment to any machine,” said Mr Henderson.

For advice on wiring electrical accessories to tractors, he urged farmers to contact their tractor dealers.

• Check the routing of wiring harness, connections, ensuring clips, fixings and grommets are secure and free from damage.

• If an electrical system is not working correctly find out why; ignoring these early warning signs could lead to a major issue.

• If you cannot find a fault, look to a fully trained technician and specialist diagnostic equipment to identify a problem.

• Maintain a strict cleaning regime by removing the build-up of any material from the engine bay, exhaust systems, axles and under-cab area

• When checking the machine’s fluid levels, if a top-up is required, ask why. Is there a potential leak within the system that could lead to a fire risk?